Pakistan: At Least 70 Killed in Suicide Attack on Sufi Shrine

ISIS has claimed responsibility for the attack on Lal Shahbaz Qalandar shrine in southern Pakistan. 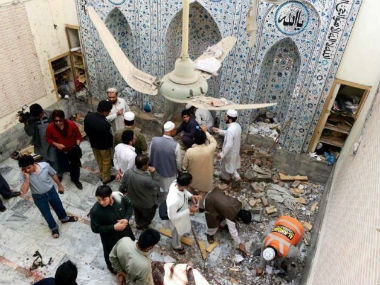 Karachi, Pakistan: More than 70 people were killed when a suicide bomber detonated explosives at a crowded Sufi shrine in southern Pakistan on Thursday, a police official said.

Senior police officer Shabbir Sethar told Reuters from a local hospital that the death toll was likely to rise.

“At least 72 are dead and over 150 have been injured,” Sethar said by telephone.

The attack on Lal Shahbaz Qalandar shrine in the town of Sehwan Sharif is the largest of a wave of bombings to hit Pakistan this week as the Pakistani Taliban and other radical Islamist militants carry out threats of a new offensive.

Prime Minister Nawaz Sharif immediately condemned the attack on Lal Shahbaz Qalandar in the town of Sehwan in Sindh province.

A suicide bomber entered the shrine as crowds massed on Thursday, a statement from the Sindh police spokesman said.

Local Dawn TV quoted a medical superintendent identified as Moinuuddin as saying 25 bodies and 25 seriously wounded were brought to a local hospital.

Geo TV quoted an unnamed medical official as saying at least 30 were killed.

Several other attacks this week, including a bomb that killed 13 people in the eastern city of Lahore, were claimed by the Pakistani Taliban’s Jamaat-ur-Ahrar faction.

Sharif in his statement decried the attack on the Sufi religious minority and vowed to fight Islamist militants who target the government and anyone who does not adhere to their strict interpretation of Sunni Islam.

“The past few days have been hard, and my heart is with the victims,” Sharif said.

“But we can’t let these events divide us, or scare us. We must stand united in this struggle for the Pakistani identity, and universal humanity.”