The Pakistan PM’s statement that women who dress immodestly are bound to have an impact on men has activists asking: must children also wear the right kind of clothes to protect themselves? 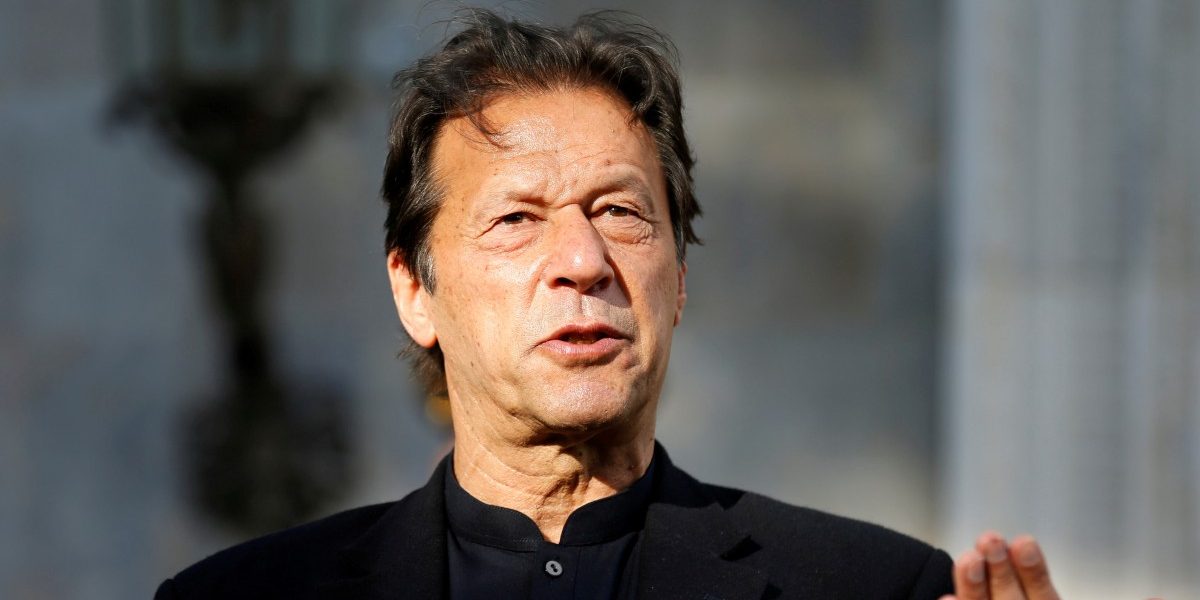 Lahore: Pakistan Prime Minister Imran Khan offended a large segment of the population of his country when, in an interview with Jonathan Swan of HBO that aired on June 20, he said that if women did not dress modestly, there was bound to be an impact on men unless they [men] were robots.

Although he tried to explain that he was not talking about himself but of how the society in Pakistan reacts to the clothes that women wear, the fact remains that when the leader of a country equates sex crimes with the way a woman dresses, he puts all the responsibility of the crimes on her.

The same thing happened in April this year when the Lahore city police chief Umar Sheikh spoke to the media about a woman who had been raped by three men in front of her children after her car broke down on the intercity motorway.

Sheikh said the woman should not have been travelling without a man, should have chosen to take more populated roads than the motorway and should have ensured there was enough fuel in the car to avoid a breakdown.

When a figure of authority – a person who is meant to be responsible for the security of the citizens of a city – blames the victim in such a heinous crime as rape, it says a lot about the safety of every person in the country. 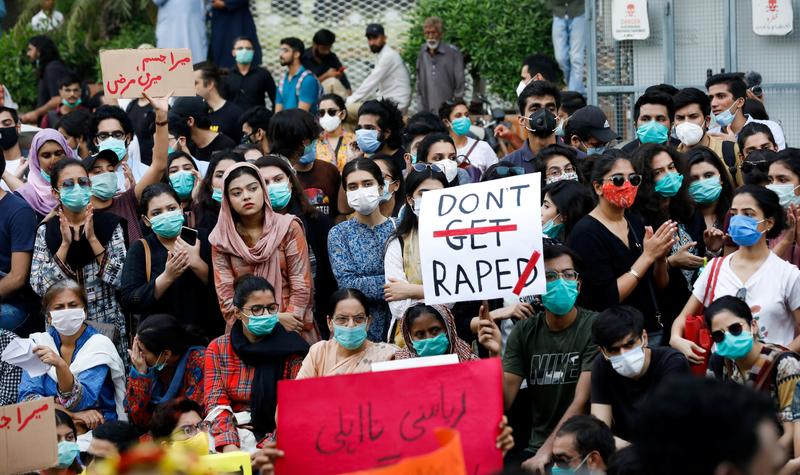 People carry signs against a gang rape that occurred along a highway and to condemn violence against women and girls, during a protest in Karachi, September 12, 2020. Photo: Reuters/Akhtar Soomro/File Photo

Imran Khan’s and Umar Sheikh’s statements are reminiscent of those made by Mukesh, one of the rapists in the brutal December 2012 Delhi rape case, in the BBC film India’s Daughter.

Interviewed in Tihar jail, Mukesh, who been awarded the death sentence for the rape and murder of the young woman, said ‘women are more responsible than men’ for sex crimes, especially if they go out alone at night and attract the attention of men.

This victim-blaming is identical to the statement made by Imran Khan. After all, various studies have shown that rapists are not necessarily monsters. They are simply men from the same society that everybody is born into and learns values from.

However, a large chunk of Pakistani society – primarily those who do not blindly support Imran Khan and his party – spoke of their anger with Khan’s statement.

For example, Senator Sherry Rehman from the Pakistan Peoples’ Party tweeted on June 21: “Whether it’s our laws or even our religion, which is very clear that respect for women is the responsibility of the beholder, no man has the right to blame women or how they dress for violence, rape and crimes against women. Shocked that our PM is doing this. Does Imran Khan not know that by saying women should dress a certain way, he is giving oppressors and criminals against women a new narrative to justify their behaviour? There is no justification for a prime minister to talk this way. Highly irresponsible and condemnable.”

Reema Omer, legal advisor to the International Commission of Jurists, tweeted: “Disappointing and frankly sickening to see PM Imran Khan repeat his victim blaming regarding reasons for sexual violence in Pakistan. Men are not ‘robots’, he says. If they see women in skimpy clothes, they will get ‘tempted’ and some will resort to rape.”

In another tweet, Omer said: “Men on Twitter today are giving rape threats to ‘punish’ women critical of the PM’s interview and to ‘teach them a lesson’ while at the same time, they are arguing men perpetrate rape to satisfy their sexual urge. The grotesque irony here is unmistakable.’

Imaan Zainab Mazari-Haazir, a lawyer and the daughter of Shireen Mazari, the ruling Pakistan Tehreek-e-Insaf (PTI) government’s human rights minister, also took to Twitter to condemn the leader of her mother’s party.

“For the PM to have such a warped understanding of the causes of sexual violence is embarrassing, problematic and simply not acceptable,” she tweeted.

‘An insult to the nation’

For Muhammad Tahseen, the executive director of the NGO South Asia Partnership Pakistan, the most unfortunate part of the whole controversy “is how women have jumped up to defend the prime minister’s statement”.

Tahseen, together with other prominent human rights activists from a 37-member Joint Action Committee (JAC) of civil society organisations, is working on mobilising people against Imran Khan’s statement.

The JAC held an internal meeting on June 22, condemning Khan’s irresponsibility as the prime minister of the country.

“In actuality this is a remark that goes against the entire Pakistani nation – saying that men can’t control themselves,” said one member of the JAC. “But who is he to make a statement on behalf of all men? How can you justify rape like that? What about the rape of little children, including boys – are they also meant to wear a burqa?”

Labour rights leader Farooq Tariq said that the statement displayed the PTI’s hidden agenda. “He [Imram Khan] is a right [winger] we all know that, but now he has very transparently shown his extremely rigid and conservative side,” said Tariq.

Tahseen added that the issue is typical of Khan’s essentially patriarchal mindset. “We would not even bother replying to such a statement knowing where it is coming from, but this could endanger the reputation of our nation if we do not,” he said.

Nida Aly, the executive director of Asma Jahangir Legal Aid Cell said that Khan’s statement was highly ironic considering that the PTI government itself had formed a committee to implement rape laws in the country and that the committee had made sure everyone knew it was working.

“At the same time, they are damaging their own work,” she said. “Surprisingly, Maleeka Bokhari, their own parliamentary secretary on law and justice, sided with him.”

Hina Jillani, a leading human rights lawyer and the sister of the late Asma Jahangir, demanded a nationwide campaign against the PM’s statement and an apology from him.

“This is the second time that the prime minister has reduced sexual violence to an act of ‘temptation’,” Jillani said. “It is dangerously simplistic. All it does is re-establish a common perception of victim blaming.”

In a press briefing on June 23, JAC members said it was extremely disheartening to see several women members of the PTI jumping to the prime minister’s defence and justifying his comments in ‘vague, illogical terms’.

“Even a cursory glance at the news should make it painfully clear that survivors of sexual violence can include women, girls, men, boys, and transgender persons – and that such acts can occur anywhere. Gender, age and attire do not ‘prevent’ rape – nor does the time of day or relationship between survivor and perpetrator. The prime minister would do well to understand that rape is an act of power, not lack of sexual control,” the JAC said in a statement.

As always, several men supported the prime minister. This man for instance, made a video showing the difference between a piece of candy that was in a wrapper and one that was not, drawing a parallel with women who covered themselves and those who did not.

Pervez Hoodbhoy, an educationist and intellectual who often offends rigid conservatives with his secular and liberal statements on various aspects of Pakistani life said while speaking to Voicepk.net, a digital multimedia platform for human rights journalism, “In my view, the prime minister is apparently atoning for the excesses he committed in his youth by making such statements. It’s shameful that despite having benefitted from such liberalism himself in his time, our prime minister is reducing the civilised society in the West to simply obscenity and nudity.”

Hoodbhoy added: “The change in the prime minister’s personality is linked to how fast he can take the society backward in time, believing erroneously that such remarks would boost his popularity.”

Already young women and little girls in higher educational institutions and schools are being socially pressured to cover their heads and bodies with scarves and abayas, Hoodbhoy said.

Karachi-based human rights activist and lawyer M. Jibran Nasir, tweeted: “Dear PM @ImranKhanPTI stop humanising the rapists, abusers and harassers and stop objectifying the victims. You may not realise it but when you repeatedly stress upon the clothes of a woman as a cause for temptation leading to sexual violence you do exactly that.”

On May 3, Nasir had called the attention of the Federal Investigation Agency via a tweet to the ‘prank’ videos of a man in Gujranwala who molested women who were not wearing dupattas and uploaded videos on YouTube showing him doing so. This man was finally arrested on June 17.

Meanwhile historian Ammar Ali Jan, a member of the Huqooq-e-Khalq movement, tweeted: “Since motorway incident, IK had the responsibility to generate conversation on how men could improve themselves. Instead his overwhelming focus was on vulgarity and women’s clothing. It led PTI supporters to defend link b/w women’s clothing & rape. Incredible failure of leadership.”

And Arsalan Khan, a political anthropologist with a focus on Islam, nationalism, and political economy in Pakistan, wrote in the digital media platform Naya Daur: “It is also a great irony that Imran Khan who is always decrying Islamophobia in the West has actually reinforced some of the worst stereotypes about Pakistani culture and Islam by suggesting that Pakistani men are incapable of controlling their sexual impulses. It is a common and dangerous Islamophobic trope that Muslim men are sexual predators who cannot adjust to Western sexual norms and thus should be policed and barred from immigration.”

Hina Jillani said the main reason that three women ministers from the PTI held a press conference to defend the prime minister was because of the uproar on social media.

“It is the power of social media that they are so scared of. We also must retort in a similar manner, using social media as a tool,” Jillani said.

Of late, social media has played an important role in revealing the depravity of sex offenders. It is on social media that cases of child sex abuse tend to be revealed.

On June 16, a boy posted a stealthily captured video showing him being forced into sex with a madrassa cleric, ‘Mufti’ Azizur Rehman, who is also a member of the Jamiat Ulema Islam.

Azizur Rehman, a 70-year-old man, was arrested. At first he tried to convince people that the video had been manipulated, but later he confessed.

Soon after, more videos of clerics abusing minors began to be posted on social media, revealing the dark, hypocritical world of religious men.

In a country where the social attitude is so conservative that sex education has been left out of the school curriculum, where words describing the human body’s genitals and even the words ‘rape’ and ‘sex’ are looked upon as shameful, the extent to which rape and other sex crimes are part of everyday life in Pakistan is shocking.

And while the prime minister easily blames the wrong kind of clothing for acts of sexual violence, people ask: must children also wear the right kind of clothes to protect themselves from the depraved sexual appetite of rapists?