The Political Sands Are Shifting in Pakistan

After Nawaz Sharif was allowed to leave the country for medical care, speculation is rife about future possibilities.

Pakistan’s three-time prime minister Nawaz Sharif left for London a few days ago, to seek advanced medical care. He has been diagnosed with immune thrombocytopenia, a blood disorder in which the platelet count drops – at times precipitously – to critically low levels, predisposing him to spontaneous and potentially lethal bleeding.

The former PM has been serving a seven-year sentence on politically-motivated, unproven graft charges, and has a long and complex medical history. Before that, Sharif had been ousted from power on a frivolous technicality, through a judicial verdict, widely perceived to have been delivered on the powerful army’s behest, to pave the way for installing his nemesis Imran Khan into power. His detractors initially accused Sharif of feigning illness but when the severity of the disorder and gravity of prognosis was conveyed to them by their own provincial health minister and medical board, they panicked.

Sharif, himself the army’s blue-eyed boy once, is now seen – along with his daughter Maryam Nawaz Sharif – as the most vociferous proponent of civilian supremacy and the need to end the army’s meddling in politics. If any harm were to come to Sharif in prison or a medical facility controlled by the government, the blame would have rested squarely at the army’s doorstep.

Sharif’s political base is the country’s most populous province, the Punjab, where he remains as popular – if not more – as he was at the time of his imprisonment. The Punjab is also from where the army draws its numerical strength and most of the brass. The political repercussions of an adverse medical outcome for Sharif, in the Punjab, could have been unwanted and potentially unmanageable for the army. The junta, therefore, wanted him out of its hair.

The additional benefit the brass seeks is that Sharif would not be able to rally his party leaders and cadres from London, the way he could, even from the prison in Lahore. The army knows fully well that his brother Shahbaz Sharif, who nominally heads the Pakistan Muslim League Nawaz (PMLN) is rather pliable and not interested in locking horns with the military.

Maryam Nawaz Sharif, on the other hand, is all set to not only take her father’s place as the party head eventually, but also to follow in his steps to challenge the army’s hegemony over politics. Maryam, however, is hamstrung by her own prison term for similarly trumped-up graft charges. Getting her out of the country, ostensibly to care for her father in London, would be most desirable for an army that is feeling the heat for its Imran Khan project being in tatters. 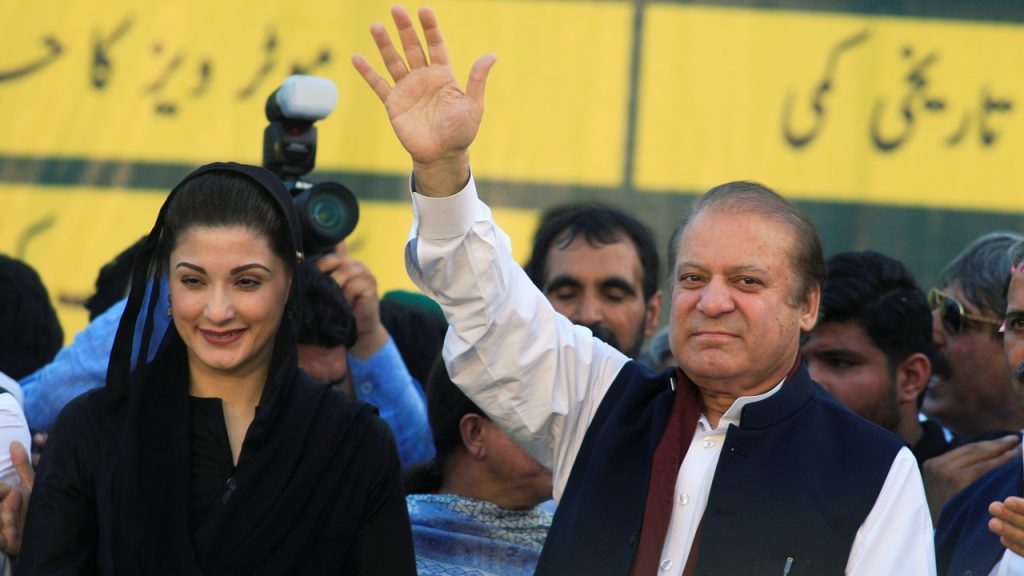 Rumours of a deal between the PMLN – or more specifically of the party establishment currently led by Shahbaz Sharif – and the army brass are rife. Some quarters go as far as alleging that the army was able to squeeze a monetary compensation, to the tune of hundreds of millions of dollars into the intelligence agencies’ slush funds, out of the PMLN, to let Sharif go abroad for treatment. I, for one, would say that the prospect of money changing hands is rubbish. Had the army been able to shake the Sharifs down to the extent that they’d agree to cough up money, it would have virtually hung them upside down and pretty much sealed their political fate.

On the other hand, a political adjustment where the elder Sharif and his daughter remain somewhat quiet, and preferably out of the limelight on account of a genuine illness, is within the realm of possibility. To be very clear, however, it is highly unlikely that Sharif would’ve given even such an undertaking. For him, and his side of the family and party – yes, the Brothers Sharif have different approaches to politics and have their own partisans – it is the three-time former PM’s legacy as the elder statesman who challenged the army’s chokehold over politics that matters the most. And he wishes to pass on this legacy along with the party leadership to his daughter, not his brother.

The army’s preference is to keep the father-daughter duo out of the political arena and preferably the country as well, for the foreseeable future. If push comes to shove, the army would be willing to work with the establishment-friendly Shahbaz Sharif, not out of the goodness of their heart but because their Imran Khan project is going bust and the latter’s party does not have a viable alternative.

The prospect that the army seems ready to do business with the junior Sharif has got Khan visibly rattled. He has again cast aspersions on Sharif’s illness and railed against the superior judiciary for allowing him to go abroad, only to be duly chastised and reminded that it was his own government that granted the actual permission. While he is unable to voice concern about the army apparently considering alternatives, he is tilting at windmills in his speeches and vowing to fight on. Khan, after all, rode to an electoral victory and power, over the army’s shoulders merely a year-and-a-half ago. He has been doing the army’s bidding barring a few minor issues. If the Chief of Army Staff (COAS) General Qamar Javed Bajwa said jump, Khan merely has merely asked, how high?

The problem, however, is that both Khan and Bajwa have been telling each other what they wanted to hear. Both of them made their case for change, based on a misleading assumption that the previous democratic dispensations were headed by financially corrupt clans, who control their parties and had ruined the economy. The panacea for course-correction, which they both appeared to agree on, was to bring back imaginary billions stashed abroad by these alleged looters. The only problem was that there were no billions to be found, at home or abroad.

Khan, however, has been boasting lately that he and his team have fixed the country’s economic woes and lifted its sagging fortunes by closing the current account deficit (CAD) and posting a surplus of 99 million dollars. This is an achievement, on the face of it, but closer scrutiny raises profound concerns about how the Khan-Bajwa regime went about achieving it. In a nutshell, it was done by reducing imports, devaluing the rupee, massively raising power tariffs and attracting so-called hot money for investment. A whopping $3.2 billion Saudi oil and gas facility on deferred payments supplanted these measures. The 19% decline in imports took an indirect toll on exports as well. Seven out of eight major import groups showed a decline. But these imports also include industrial raw materials and intermediate goods used by exporting industries, leading to measly production and exports. 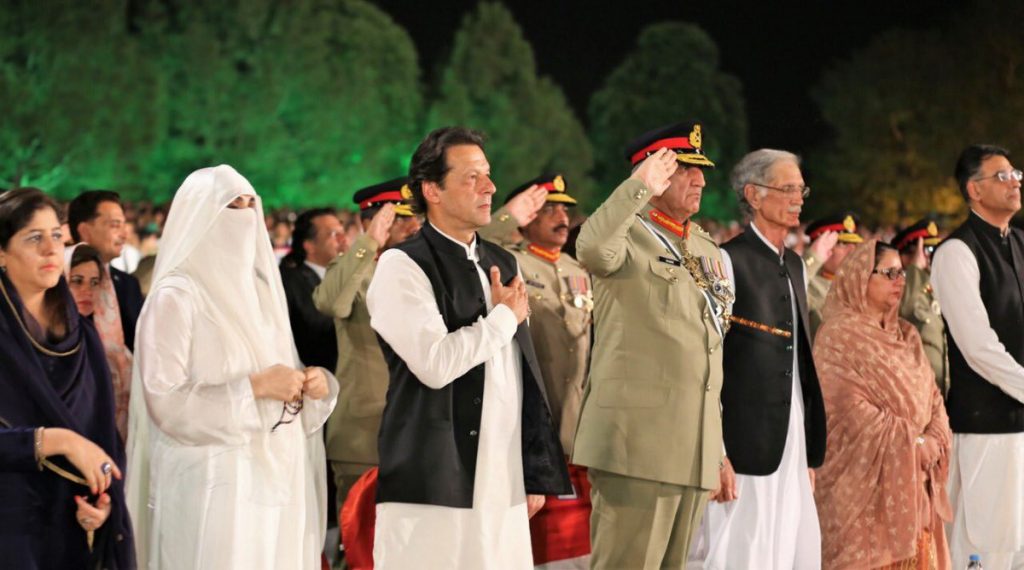 The largest decline in imports was for transport and machinery, plunging the local auto industry into a deep crisis. In effect, growth slowed down to 3.3% in FY19 – down 2.2% from last year – and the economy came to a standstill. And while the CAD looked pretty, inflation and unemployment kept soaring. The hot money injections – worth about $800 million in under a year – into the economy, are also a double-edged sword. It is essentially quick foreign portfolio investment to boost exchange reserves. Instead of more desirable medium to long-term bond investing, these investors seek short-term gains through 3 to 6-month treasury bills and, when the things go awry, move their capital out equally swiftly. The economy might be performing to the liking of Khan and the IMF, which has recently bailed Pakistan out for the umpteenth time, but the joblessness and skyrocketing commodity prices have hit the public where it hurts the most – their pocketbooks.

With GDP growth projected to plunge further to a dismal 2.8% in FY2020 and inflation staying at 12%, the short-term economic outlook is really grim. A no-growth economic recovery does little to assuage the general public’s woes, which are urgent and real. That by itself can destabilise the most comfortable governments, let alone Khan, who only has a parliamentary plurality, and is beholden to smaller coalition partners for maintaining a simple majority. And therein lies the rub. While the long march by the cleric-politician Maulana Fazl-ur-Rahman fizzled out without succeeding in achieving its declared objective of getting Imran Khan to resign, it has left him vulnerable on several counts. The maulana’s undeclared objective was to convey to the army that it would have to allow an even playing field for those political entities, who, like himself, have previously worked with it, and not pick favourites like Khan at their expense. Khan’s coalition partners also sensed his weakness and have made noises about the army’s role in propping him up for a good decade, if not more.

The army’s Imran Khan project was ostensibly designed to run for at least ten years, but recent developments have clearly revealed chinks in the armour. The hybrid regime with a civilian face is coming apart at the seams sooner than expected. With a three-year extension under his belt, General Bajwa is firmly in the saddle and Khan remains the weakling in the duo that he always was. All options ranging from an in-house change of premier to snap polls are being thrown around.

Change is afoot but whether it would lead to another Imran Khan-like dispensation or something a bit more independent of the army, depends on Nawaz Sharif’s health and recovery. If Sharif recovers reasonably swiftly, and one hopes and prays that he does, he is unlikely to play second fiddle to his brother, even from prison. Shahbaz Sharif is an able administrator but has virtually no appeal outside Punjab. The PMLN’s vote bank belongs to his brother, a fact not lost on friends and foes. Unlike her uncle, Maryam Nawaz Sharif is rapidly evolving into a leader who is well-liked across Pakistan. For the elder Sharif, his political legacy is paramount, and he is going to strive to make it all about civilian supremacy. Whether he is able to overcome his medical, legal and political hurdles, remains to be seen but the political stands are clearly shifting in Pakistan.

Note: Due to an editing error, the blurb in an earlier version of this article mistakenly said Maryam Nawaz Sharif had also left Pakistan along with her father.