A file photo of a protest in Balochistan, Pakistan, against enforced disappearances. Photo: Facebook.

Lahore: Hafeez Baloch is a quiet, unassuming young man. An M.Phil student in physics at the Quaid-e-Azam University (QAU) in Islamabad, he spent most of his time in the library or laboratory.

For the most part of the year, he would stay in Islamabad. But during vacations, he would travel back home, to the city of Khuzdar in Balochistan. As he hails from a poor family, he would often take tuitions to earn some money while contributing to the elementary education in Khuzdar. Though life was difficult, it was not impossible.

On February 8, Hafeez had been taking a class at a tuition centre when four masked men in plainclothes barged in. They knew who they were looking for because they asked the guard about him at the gate. In front of pupils there, they told him, “Your time is up.” He was then dragged out. That was the last time someone saw him.

His family has protested several times since then, demanding answers. But neither the government nor the vice-chancellor where Hafeez studied has issued a statement. Only silence reigns.

The issue of enforced disappearances has plagued Pakistan – especially the Balochistan province – since military dictator General Pervez Musharraf decided to join the US’s ‘War on Terror’ post 9/11. People would be abducted or illegally detained and would be tortured.

The modus operandi is similar in most cases. Plainclothesmen (or masked men), a double-door van, a hood over the head of the victim, blindfolds, torture, curt questioning, more torture, and finally a warning before being released – or fade to black.

Analysis of those who have been disappeared shows two trends: many of them are from lower socio-economic groups or belong to one of the smaller provinces like Sindh, Balochistan and Khyber Pukhtunkhwa. The intensity is especially severe in Balochistan, where Pakistani military and intelligence agencies regularly conduct anti-insurgency operations. 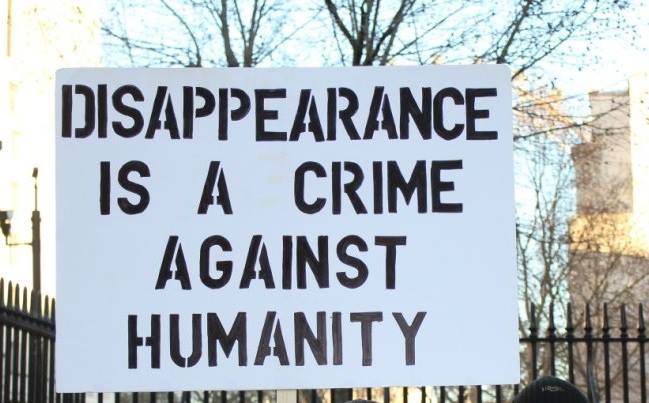 SB, a student who requested anonymity, has been part of the recent protests in QAU demanding answers on Hafeez’s disappearance. The student says that Hafeez’s family is very poor. They had to struggle to make sure Hafeez was able to continue his education. “To be that kind of a hardworking student, acing grades throughout the year – why would he want to be involved in anything else? The family is so poor that it cannot even fight this case in court.”

SB says that the sense of insecurity has become so strong that Baloch students are worried that if a dedicated student like Hafeez could be picked up, anyone else could be too.

“Some time ago, we heard that a team had come on campus to collect data on Baloch students,” he reveals.

Another student says Hafeez is just a physicist and a researcher on high energy, not an activist. “We come here to study, so why are the Baloch students being targeted?”

Parvez Hoodbouy, a nuclear physicist, activist and former teacher at the QAU, described Hafeez’s abduction as outrageous. “It’s the signature of a fascist state, and we know that the intelligence agencies are behind it,” he said. Hoodbouy often campaigns for free speech among other causes.

Thousands have gone ‘missing’. The government says it is because of their involvement in terrorist activities. But there is little evidence to prove this.

The disappearances also take a terrible toll on the families. In 2020, Fatima Ishaq, whose brother Imam had been missing for the past two years from Turbat, a city in southern Balochistan, killed herself. Family members say she had been suffering from depression.

Some of those who were ‘missing’ have returned home. While their families are relieved to see them, they are only shells of their former selves, having undergone much mental and physical torture.

Others have returned maimed or disabled – only to be picked up again. They may not return the next time.

Ghulam Mohammad, a popular leader in Turbat, was found dead in 2009, with his hands tied behind his back and cigarette burn marks on his body. He had been abducted along with two other Baloch leaders and all three were found the same day, in the same condition. It was believed that Mohammad was targeted because his political tilt was uncompromising in the eyes of the establishment.

It prompted an outcry. The Baloch living not just in their home province but also in Karachi – the most political and dynamic of cities in Pakistan – were irate. Tires were burnt by angry protestors, and shops were shut. For three days, there was an eerie desolation in parts of Balochistan as well as Baloch-dominated areas in Karachi.

Balochis who leave the country also remain targets. Mohammad’s nephew, journalist Sajid Hussain Baloch, had been associated with Baloch Students’ Organisation. After his uncle’s killing, he left to live in Sweden. Eight years later, in 2020, he went missing. Hussain was not involved politically anymore, but he ran a website that had also been blocked by the Pakistan Telecommunications Authority. It carried several hard-hitting pieces. Two months after he had gone missing, his body was found, floating in the river Fyris.

In a similar case, Baloch activist Karima Baloch, who had been living in Canada, went missing. She was found ‘drowned in a lake‘ in December 2020.

“We are not safe anywhere,” the Baloch often say.

According to a 2019 report issued by the Human Rights Commission of Pakistan, 47,000 Baloch and around 35,000 Pashtuns were ‘missing’, adding that the numbers are contested.

Sometimes, it seems that the disappearances have decreased. At others times, a ‘new wave’ bursts forth.

“In reality, there are many disappearances in the smaller areas, in the heart of the province, not just in the cities or larger districts,” says Mir Muhammad Talpur, who belongs to the senior cadre of political workers back in the 1970s, when Zulfikar Ali Bhutto’s Pakistan People’s Party was in power.

Talpur is also known as someone who speaks his mind without “mincing his words”. “Baat yeh hay keh logon ko uthanay ka silsila kabhi khatam hua hi nehin (The fact is that the abductions have never stopped),” he says.

“There has been a constant crackdown on the Baloch; they never stop it,” he says. “But, because there is a media blackout for decades now, the rest of the country knows nothing about it. In areas like Marri and Dera Bugti, I can confidently say that there have been at least five or six people who have been missing for the last 18 years. The Counter Terrorism Department (CTD) is known to be involved in the extrajudicial killing of people,” he said.

Talpur says that from the time he was involved in politics and even today, intellectuals or educated persons are seen as “dangerous” because they are the ones who question the state. He accused nationalist Baloch parties of remaining silent to protect their clout in the region.

His statement was reinforced by the fact that when this correspondent contacted some Baloch nationalist leaders, none replied, including Sanaullah Baloch, a member of the provincial assembly from the Baloch Nationalist Party (Mengal).

The new wave of abductions is different though – they began after a sudden escalation of violence in Balochistan.

On January 20, a blast in Lahore’s Anarkali bazaar left two dead and 20 injured. No one claimed responsibility for the bomb fitted inside a motorcycle. But in the aftermath of the blast, four to six Baloch students were picked up. A Baloch Students Council spokesperson said that the raids by law enforcement agencies on the hostels where Baloch students resided were “discriminatory”, and were creating fear and insecurity among all the other Baloch students in the city.

On January 25 night, around 10 soldiers were killed in a ‘fire raid’ on a security forces check post in the Kech district of Balochistan. Later the military’s PR wing, Inter-Services Public Relations (ISPR), released a statement saying that one of the attackers was killed, while three were apprehended.

It also said, “The armed forces are determined to eliminate terrorists from our soil no matter what the cost.”

The next day, at least four people were killed and 10 were injured in a blast in the Sui area in the Dera Bugti district. According to information from the Levies’ Control Room, the victims drove over a landmine. But the Balochistan Awami Party (BAP) leader Senator Sarfraz Bugti said that it was the “Baloch Republican Army terrorists” who were behind the attack. Bugti tweeted:

Four people were martyred while eight others were injured in an attack in Mat area of Sui, #Balochistan. Baloch Republican Army terrorists were behind this attack. Would like to know for how long the state will continue to tolerate such attacks on innocent people.

By February 5, the ISPR reported that the military had on the previous day conducted a clearance operation against terrorists and 20 of them were killed. Five soldiers were also killed, while six were injured.

The ISPR had also said that three terrorists linked to the attacks were killed on February 4, including the two high-value targets at Balgatar in Kech in an operation that was conducted at a “makeshift terrorist hideout”.

A Baloch journalist, under the condition of anonymity, says that Pakistani authorities adopted “a tough policy” to deal with the insurgency. The enforced disappearances of educated youth from Pakistan’s metropolitan cities is part of this policy, the journalist said.

Student activist Sadia Baloch, based in Quetta, says that students are being targeted for being more aware of their rights or because they are more vocal.

“More and more students are becoming politicised. They come out to demand their rights, and they are loud about it. The state thinks the educated Baloch are a threat,” the activist said.

Sadia said the insurgency in Balochistan is fuelled by the government’s neglect of the region, but reiterated that the increase in violence only makes lives worse for ordinary civilians, especially the young.

Also read: The Anguish Caused by Enforced Disappearances in Pakistan

“We have been sidelined, and no one from the government says anything,” she says. And while it is men who are picked up, female students also remain under threat because their family members could be picked up too,” she said.

Hina Jillani, the chairperson of the Human Rights Commission of Pakistan, released a statement on Thursday, February 17, about the “alarming reports” of enforced disappearances in Balochistan and the rest of the country, including Hafeez Baloch’s.

The commission said it is particularly concerned by the “continuing shroud of silence over enforced disappearances” in Balochistan, which remains “deliberately cut off from the mainstream media”. “The state must understand that it cannot expect to resolve the legitimate grievances of the Baloch people if it is not prepared to let these grievances see the light of day,” the statement said.

The commission also said a single person has never been prosecuted for missing persons’ cases.

“They talk about forming a truth and reconciliation commission but both groups are not equally involved. There has never been a single person prosecuted for missing persons cases, they have complete impunity. As long as the State does dirty warfare, it will keep giving rise to such militants. In order to have reconciliation, the State has to give concessions to the Baloch. Without this there can be no reconciliation. And till the military has its financial interests in the region, nothing can be done,” says Talpur.

Xari Jalil is a journalist who reports from Karachi and Lahore. She is also co-founder of Voicepk.net, a non-corporate/non-profit digital platform for human rights. She tweets at @xarijalil.