Every time relations with India have soured, the loyalty of Pakistani Hindus and Sikhs was questioned – incidents of violence against them were reported during the wars of 1965 and 1971.

I met Parvati Devi in 2011 when I travelled to Multan to document the festival of Holi for my book A White Trail. This was the first time since Partition that the ‘Hindu’ community in the city were celebrating Holi. I use the word Hindu with caution here because the identity, particularly in Punjab, became contested at the time of, and after, Partition.

Many Hindus started wearing crosses or took on Christian names to escape the riots. With the situation worsening for the Hindus in the aftermath of contentious relations between India and Pakistan, many of them stuck to their Christian identities. Today, these Christian and Hindu identities continue to interplay, with many floating between them and taking on one identity or another, depending on the time of the year.

It is in this way that a Christian-dominated community in Multan, the fifth largest city in Punjab and the seventh-largest in the country, with an overwhelmingly Muslim majority, came to celebrate Holi. I wanted to visit Multan for Holi because of the mythological legend that connected the story of Prahlad Bhagat, Hiranyakashipu and Holika with Holi.

According to this legend, Hiranyakashipu was the tyrant ruler of Multan, challenged by his son Prahlad Bhagat, in a story that had a lot of similarities with the story of Moses and the Pharaoh. The legend states that the festival of Holi is celebrated to mark the victory of Prahlad Bhagat over Hiranyakashipu, of truth over evil. Thus this legend attributes the origin of Holi to Multan, and I saw a symbolic significance in attending the festival there – the first time it was being celebrated after Partition.

This revival of Hindu religious festivals, particularly in Punjab, was a part of the ‘Enlightened Moderation’ years under the military dictator Pervez Musharraf. With the image of the country suffering a tremendous blow due to the rise of Islamic fundamentalism, the state, under Musharraf, took to projecting a soft image of the country, in which protection of the religious minorities played a pivotal role.

The democratic regime that took over the reins from Musharraf followed the tradition. Thus by the end of the first decade of the new millennium, the Hindu community of Punjab had begun to feel comfortable enough to celebrate some of their religious festivals on a large community scale. I saw this happening not just in Multan, but also Lahore and Bahawal Nagar. 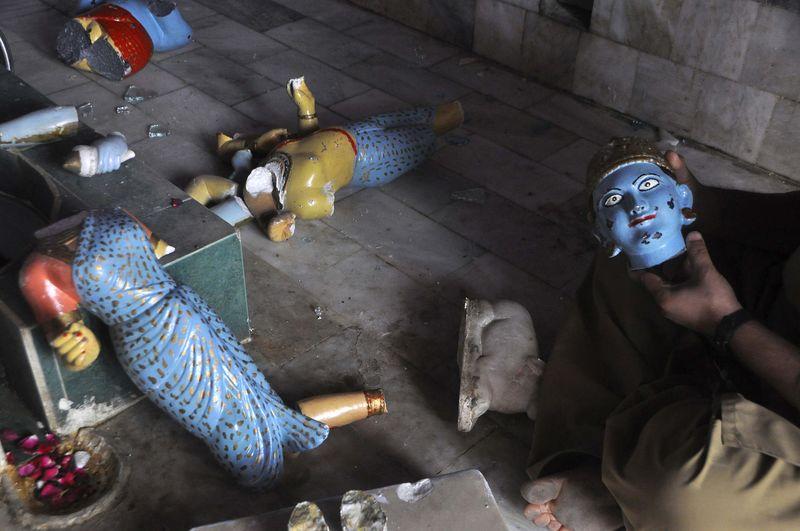 In this March 2014 file photo, a member of the Hindu community holds a damaged statue inside a temple that was attacked in Larkana, southern Pakistan’s Sindh province. Photo: Reuters/Faheem Soormro/Files

However, being a prominent face from the community is also dangerous, particularly for those from a persecuted minority. On December 7, 1992, a day after the Babri Masjid had been demolished in Ayodhya, a mob gathered to ‘avenge’ the desecration of the mosque more than a thousand kilometres from here. This was, however, nothing new.

For many residents of the city of Multan, some of whom were a part of this mob, this duality of Christian/Hindu community was obvious. Parvati Devi told me how the mob was searching for her house within the community. They wanted to burn her. Her ‘sacrifice’ would have somehow redeemed the ‘honour’ of this mob.

What happened in Multan was not an isolated event. There were similar mobs all over Pakistan that brought down historical Hindu temples, most of which had been abandoned at the time of Partition and were serving as residential quarters. The historical temple of Prahlad Bhagat that connected the story of Holi with Multan was attacked and left in ruins.

The Jain Mandir in Lahore was also destroyed – its turret still lies on the ground, bearing witness to the events that unfolded on December 6 in Ayodhya and then December 7 in Pakistan. Other temples in the historical city of Lahore – Seetla Mandir, Bhadra Kali Mandir and Bheeru da sthan continue to stand – their partially ruined structures bear the scars of the unfortunate events.

One of the only functioning temples in Lahore catering to the Valmiki Hindu community of the city – similar to the Hindus in Multan – who wore multiple religious identities, was also burnt and its pre-Partition idols were destroyed. The building, I am told by the priest of the temple, burned for days. He told me that the administration of the temple had gathered at the temple on the morning of December 7, 1992, to discuss precautionary measures.

Given the history of the country, it was obvious that there would be repercussions. However before they could decide anything, a mob of hundreds violated the space of this small community’s temple and physically attacked it. Many utensils and other everyday paraphernalia of the temple was stolen, including the bike of the priest. They could only look on, thankful for the fact that the mob let them go. For months afterwards, the Pandit remained in hiding, out of fear of further repercussions. They were reports in the local newspapers that he had fled to India.

Much like the Hindus in Multan, it took them years to recover from the trauma of 1992, picking up pieces of their life and finding strategies to survive in the country. It seems as if the worst is behind them and they now live in a country where it has become less dangerous to openly exert their identity. However, they are also acutely aware of the fact that this equilibrium is balanced on the precarious politics surrounding India-Pakistan and Hindu-Muslim relations and the Babri Masjid in India.