With food commodities and energy prices rising, an element of public unrest, which could morph into even an agitation against the PTI government, remains a real possibility. 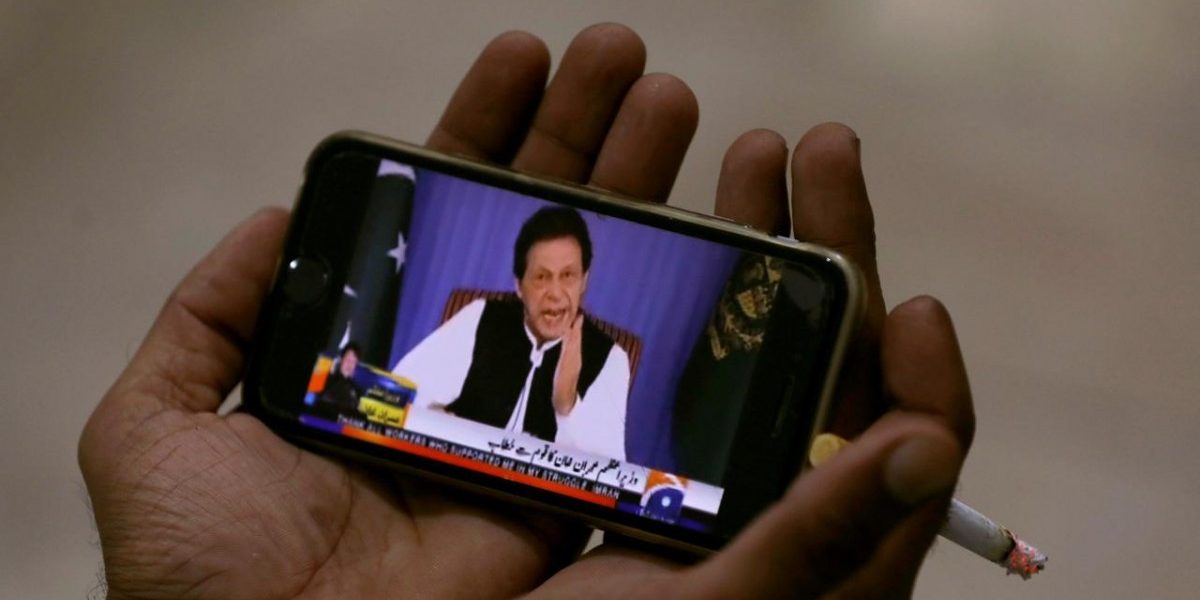 A journalist with a mobile phone displaying Imran Khan, Prime Minister of Pakistan, speaking to the nation in his first televised address, in Karachi, August 19, 2018. Credit: Reuters/Akhtar Soomro/File Photo

Pakistan’s government and its army handlers are in a disarray. And the reason is not some concerted domestic political opposition or foreign pressure; it is the sheer incompetence of the army’s political protégés and the outfit’s ignominious tradition of biting off more than it can chew.

Pakistan’s economy is in a virtual free-fall and the blame for it rests squarely with the army, which had upset the applecart of democracy by engineering former Prime MinisterNawaz Sharif’s ouster in 2017. Within a span of the past few weeks, finance minister Asad Umar – touted for a decade as the economics whizz-kid – was unceremoniously shown the door, the State Bank of Pakistan’s governor eased out and the chairman Federal Bureau of Revenue fired.

In the face of a massive economic turmoil, cricketer-turned-politician Imran Khan’s Pakistan Tehrik-e-Insaf (PTI) government, which was virtually installed into power by the country’s powerful army last year through a stolen election, is running around like a chicken with its head cut off. Most, if not all, economic indices are headed in the wrong direction. The GDP growth has taken a nosedive from 5.4%in 2017 to 3.9% in 2019, while inflation skyrocketed from 4.2% in 2017 to 9.4% now and is projected to hover above 7% for the next fiscal year as well.

Also read: Pakistan Army Will Decide Which Retired Officers Can Appear on TV Channels as Experts

The measly economic growth puts Pakistan at number six among its South Asian peers – a notch above Sri Lanka and Afghanistan – but behind even Nepal and Bhutan. The country has consistently trailed India and Bangladesh on economic growth and human development indicators for years on end. About a quarter of the country’s over 220 million population is living below the national poverty line and over 22 million children remain out of school.

Faced with about $18 billion in fiscal shortfall, the PTI and the army approached the issue with hyper-nationalist posturing; the government first claimed that it won’t seek assistance from the International Monetary Fund (IMF) and then dithered over it for months. The civil-military combine had put great hopes in the so-called all-weather friends China, the Saudis and the UAE for a bailout. But they were not able to get even half the amount needed to bridge the country’s financial gap and remain current on its circular debt and imports payments.

With public debt at 70% of the GDP, foreign exchange reserves sitting at a paltry $9 billion, poor exports and high imports, falling expatriate remittances, plunging stock market, a struggling industrial sector grappling with infrastructure nightmares like water and power supply, and faltering cotton-driven agroeconomics, the hyper-patriotic, chest-thumping Imran Khan and his backers went begging the IMF – for the 22nd time in the country’s history! And not just that, they agreed to install a new financial team that is essentially IMF and World Bank officials on deputation to Pakistan to carry out its harsh terms for the facility that is still being negotiated.

What is lost on Khan and his task-masters, however, is that changing faces does not change the fundamentals of the economy. First and foremost, the key to economic development is political stability. By tripping democracy every step of the way and toppling even the weak democratic governments, the Pakistan army has repeatedly created uncertainty and chaos. And if there is one thing that the market economy despises more than a recession, it is uncertainty.

Consumer confidence and spending, domestic industry, agriculture and stock markets, as well as the foreign investment, all dwindle when a pall of political uncertainty goes up over a country. Add to it the domestic Islamist terrorism problem – entirely a blowback of the army’s disastrous policy of using jihadists to prosecute its foreign policy – raging for a decade and a half, and the country doesn’t exactly look like the Xanadu that foreign investors would make a beeline for.

The perpetual state of Cold War with Afghanistan and India, and the army’s refusal to allow free trade with both, hampers not only the domestic entrepreneurs seeking new markets but also disincentivises foreign investors. Political volatility, teeming extremists and friction with neighbours along with the perennial water, power, raw material and skilled labour shortages, have sunk Pakistan to 136 out of 190 in the World Bank’s Ease of Doing Business rankings.

The flagship China-Pakistan Economic Corridor (CPEC) project with a purported $60 billion Chinese loans and investment, and a key component of China’s Belt and Road Initiative (BRI), is increasingly looking like a road to nowhere. What was trumpeted as an economic miracle in the works, has piled on external debt with little to show in terms of infrastructure development and job creation. The current-account deficit grew to over 5% of the GDP, thanks partly to borrowing under CPEC contracts.

Also read: Invoking Patriotism as a Way of Shutting Down Questions

While even Khan’s government has murmured about the opaque nature of the CPEC projects and its viability in the context of massive debt burden, it is not at liberty to openly discuss it, because of the army’s, which has remained the mover and shaker of the project, overarching goal is security ties with China. From enabling Pakistan’s nuclear weapons programme to shielding the Pakistani jihadi terrorists, China has pulled the army’s chestnuts out of many geopolitical fires. And to this end, the army is willing to compromise on the viability of an economic mega-project in the name of national interest and security, which ironically it has anointed itself to define.

Moreover, without opening up the trade with India and Afghanistan, the CPEC might remain the pie in the sky or debt-trap which Pakistan may find itself difficult to extricate from. Like the army’s monumental blunders in both all-out and proxy wars with the neighbours and against its own people, the CPEC is a far cry from being the economic game-changer that it was touted to be.

The problem with the army’s obsession with becoming the sole arbiter of national interest and security is that it has arrogated itself the right to dictate domestic and foreign policies to suit that rather nebulous creed in which Pakistan and Islam are somehow in perpetual danger and the army is the only saviour they have. These twin delusions of paranoia and grandeur are actually feigned and self-serving to justify the outfit’s chokehold on the country and its resources.

Additionally, anyone questioning these khaki masters of disasters is smeared as a traitor, sell-out and even outside the pale of Islam. By shutting out dissenting voices, alternative points of view and critical assessments, the junta has become a rather inbred clique that marches on from blunder to blunder.

The army’s Imran Khan project was another such blunder, in which both the army and Khan convinced each other that if somehow they get rid of the traditional political forces – whom they labelled corrupt – they can put Pakistan on the path to economic prosperity. The double-trouble was convinced that politicians have hundreds of billions of dollars stashed away abroad, which the PTI would somehow retrieve with the wave of a magic wand. Needless to say, that particular bravado came to a naught.

The PTI then launched a scheme for overseas Pakistanis to buy dollar bonds called Pakistan Banao (Build Pakistan), which also fell flat. As the maxim goes, then indecision has its own delays, and days are lost lamenting o’er lost days. All these gimmicks and demagogy delayed the inevitable: seeking the IMF bailout.

It is highly likely that the IMF will yet again throw Pakistan an economic lifeline, but perhaps at more stringent terms and closer monitoring than it might have done eight months ago. The IMF formula is rather well known, with its insistence on recalibrating power prices upwards, removing subsidies, propping up exports and broadening the tax base and stopping haemorrhaging through evasion. At this late stage, it might break the free-fall but is unlikely to stop the slide.

With food commodities and energy prices rising, an element of public unrest, which could morph into even an agitation against the PTI government, remains a real possibility. While the PTI ended up eating a humble pie, the real egg is on the army’s face, whose pet project Imran Khan is about to go belly up. Unfortunately, in its political engineering experiments, the army has brought Pakistan at the brink of bankruptcy and caused immense grief to its toiling masses.