In a joint press conference on Saturday, the Pakistani army spokesperson and foreign minister said a dossier containing "irrefutable evidence" against India would soon be submitted to the UN. 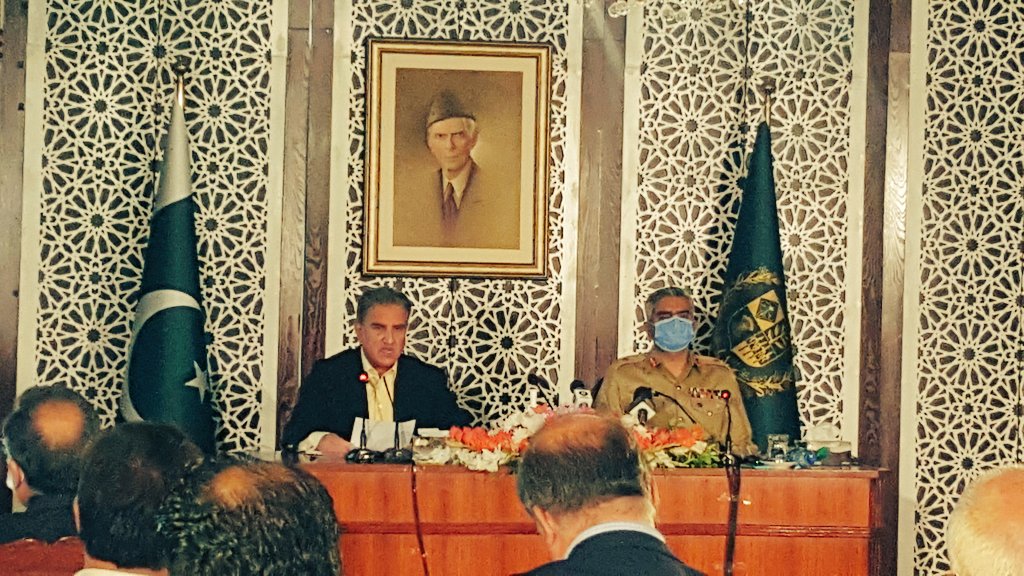 New Delhi: In a move aimed as much at its domestic audience as at the international community and perhaps the incoming Biden administration in the United States, Pakistan on Saturday claimed it has extensive evidence of an alleged Indian role in terror attacks within its territory, ranging from Balochistan to Khyber-Pakhtunkhwa as well as in Gilgit-Baltistan in Pak-occupied Kashmir.

Soon after the press conference, the allegations – essentially a mix of unverifiable assertions interspersed with three audio recordings of unknown provenance and screen-shots of letters and claimed bank transactions –  were amplified by Pakistan’s prime minister, Imran Khan, who described this as “irrefutable evidence of India’s state-sponsored terrorism inside Pak” in a series of tweets.

India has so far not responded to the Pakistani charges though officials in the past have described similar allegations in the past as baseless.

“The state that used to say that it was the world’s biggest democracy is [now] becoming a rogue state through its activities. We have information and evidence on the basis of which I can say India is fanning state terrorism. India has prepared a plan to destabilise Pakistan,” said Qureshi, as quoted in Dawn.

Qureshi also asserted that India had been planning attacks from “neighbouring countries”, mainly pointing to Afghanistan.

The Pakistani foreign minister said that a dossier his government had compiled was being shared with the United Nations, the five permanent members of the Security Council and members of the Organisation of Islamic Cooperation (OIC).

“Without international intervention,” Qureshi said, “it is difficult to guarantee peace in nuclear South Asia”.

The press conference took place just a day after Indian and Pakistani troops exchanged heavy firing across the Line of Control, which killed at least 13 soldiers and 18 civilians.

Pakistan had summoned the Indian chargé d’affaires on Friday over the ceasefire violations.

A day later, India summoned the acting head of Pakistan’s diplomatic mission in New Delhi to protest the “deliberate targeting of innocent civilians by Pakistani forces”. “It is highly deplorable that Pakistan chose a festive occasion in India to disrupt peace and perpetrate violence in J&K through coordinated firing along the length of the LoC using heavy caliber weapons, including artillery and mortar on Indian civilians,” said a press release issued by Ministry of External Affairs.

At Saturday’s press conference, purported phone recordings were played which Pakistan alleged were conversations between an Indian intelligence handler and Indian agents in Pakistan.

The DG ISPR alleged recent acts of terror in Pakistan were a “direct consequence of India’s intensified engagements with all brands of terrorists, sub-nationalists and dissidents operating against Pakistan”.

The Pakistani army officer claimed that an Indian intelligence official employed in Indian embassy in Kabul, whom he identified as “Colonel Rajesh”, is the mastermind of a plan to bring together the Tehreek-e-Taliban-Pakistan with Balochi militant organisations. He also displayed a letter in Dari which allegedly stated that the Indian officer had four meetings with commanders of these groups to organise terror attacks in Pakistani cities in November and December.

Pakistan has also claimed that India is trying to create an ISIS chapter in Pakistan and has “relocated 30 Daesh militants from India to the Pakistan-Afghanistan border”. He did not clarify what the status of Daesh’s existing Pakistani entity is. ISIS already has the Islamic State-Khorasan for Pakistan and India, a group which was further sub-divided into separate terror outfits for ‘Pakistan province’ and ‘India province’.

As they have been in the past, Pakistan’s latest allegations are heavily centred on India’s diplomatic missions in Afghanistan, which have been a historical bugbear for Islamabad. Pakistani officials had previously encouraged a popular perception that there were over 20 Indian consulates along Afghanistan’s southern border, even though India has only five in the entire war-ravaged nation – Jalalabad, Kandahar, Herat, Kandahar and Mazar-e-sharif.

The Pakistani army officer even alleged that an “Indian ambassador and consular general (sic) in Jalalabad” had been involved in giving “financial support” to TTP and dissident Baloch elements. He said he was withholding their names.

“[In the first payment,] $28,000 was transferred by Punjab [National] Bank in India [while] the second transaction of $55,851 was made by an Indian national Manmeet from an Indian bank in New Delhi, which was received by Afghanistan International Bank,” said that Pakistani Major general. A slide he showed identified the PNB branch at Indira Gandhi International Airport in Delhi.

Pakistan also asserted that RAW officials were behind terror incidents like the 2016 Army Public School,  University of Agriculture in Peshawar in 2017 and the attack on Pakistan stock exchange in June this year.

Some of these claims were also made by the adviser to Imran Khan on national security, Moeed Yusuf, in an interview to Karan Thapar for The Wire last month. When challenged about these claims, and Pakistan’s failure to raise them in the past, Yusuf had said his government would soon be making a detailed statement about them.

Pakistan’s DG ISPR even asserted that India had raised a “700-strong militia to sabotage CPEC by carrying out terrorist attacks in Balochistan”.

He also showed a document which he said was the record of a meeting in India’s ministry of home affairs in September in which officials allegedly discussed “methodology to trigger negative reaction” in Gilgit Baltistan over granting of provincial status, including fomenting violence through IED explosions and assassinations.

Interestingly, the Pakistani army officer also clubbed the “politicisation” of Financial Action Task Force with these terror allegations against India. He said that Pakistan had evidence of how Indian diplomatic missions had sent letters to their host countries to lobby for downgrading Pakistan’s status which led to its grey-listing in June 2018. It is, however, not clear how this would be a revelation for the international community, if the letters related to FATF had been sent by India to countries through diplomatic channels.

This is not the first time that Pakistan has accused India of fomenting terrorism. India has dismissed all such allegations, asserting that Pakistan was only trying to distract from its own record of supporting terror networks in the neighbourhood.

In 2015, Pakistan PM’s advisor on foreign affairs and national security, Sartaj Aziz had handed over three dossiers to then UN secretary general Ban Ki-Moon about “Indian interference” in Balochistan, FATA and Karachi.

Two years later in January 2017, Pakistan’s permanent representative to UN, Maleeha Lodhi delivered another dossier which apparently had “proof of Indian/RAW interference in Pakistan and involvement in terrorism — particularly in Balochistan, FATA and Karachi”. The dossier had included allegations about the activities of Kulbhushan Jadhav, a former Indian naval officer, who continues to be in Pakistani custody.