K.P. Sharma Oli and Pushpa Kamal Dahal 'Prachanda' have reached a stalemate despite holding over half-a-dozen meetings in a week. 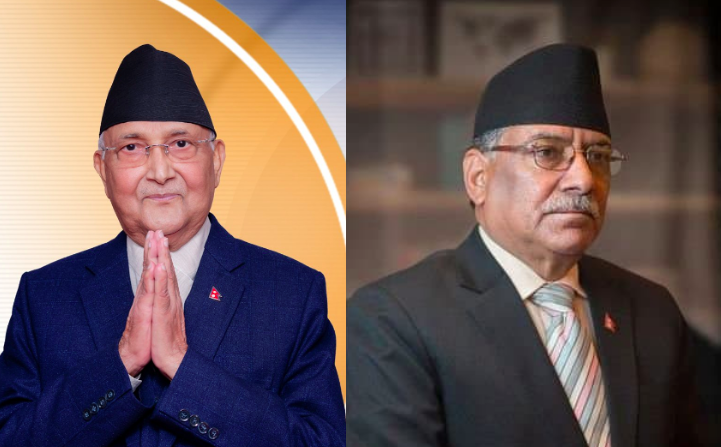 On Wednesday, a crucial meeting of the NCP’s 45-member Standing Committee was postponed till Friday. The meeting was deferred for the fourth consecutive time in a bid to provide enough time for the two chairmen of the party to sort out their differences amidst the heightened intra-party rift.

The political future of 68-year-old Oil is expected to be decided on Friday during the Standing Committee meeting, amidst the growing involvement of Hou Yanqui, the Chinese ambassador to Nepal, to save his chair.

The Prachanda faction, backed by senior leaders and former prime ministers- Madhav Kumar Nepal and Jhalanath Khanal, has been demanding Oli’s resignation since his recent anti-India remarks were “neither politically correct nor diplomatically appropriate.”

The differences between the two factions of the Nepal Communist Party – one led by Oli and the other by ‘Prachanda’ on the issue of power-sharing have intensified. The rift can be attributed to the prime minister’s unilateral decision to prorogue the budget session of Parliament, the government’s underwhelming response to the Covid-19 pandemic and his unilateral actions [bypassing the party].

The Kathmandu Post reported that despite holding a series of meetings to iron out their differences, both the factions have gone back to locking horns.

On Wednesday, despite an agreement with Prachanda to not direct any street protests, there were sporadic demonstrations across the country in support of Oli.

According to a Standing Committee member, the protests in Oli’s support have not made things any better.

In Kathmandu alone, at least seven sporadic demonstrations took place on Wednesday, followed by others in different parts of the country, including Saptari where the Oli rally was confronted by a Dahal rally.

Oli’s supporters are coming out on the streets instead of supporting rapprochement inside the party. We are firm in the belief that the party should not split as it would be a betrayal of the people’s mandate, NCP spokesperson Narayan Kaji Shrestha said.

According to party insiders, this indicates the failure of dialogue between the two warring party chairs.

Despite holding close to six one-on-one meetings in a week, Oli and Prachanda have failed to make any headway, the Post quoted party leaders.

On Wednesday evening too, they held a two-hour-long one-on-one meeting at the Prime Minister Oli’s Residence but failed to reach any consensus, according to Bishnu Sapkota, Prachanda’s press coordinator.

The leaders have not narrowed down their differences yet. They will meet again, he said.

Both are adamant over their respective positions so no headway has been made yet, Shrestha told the Post.

According to a party member, Oli has agreed to obey the party leaders says and will correct his working style. However, he will not step down because he was elected by the people to serve as the prime minister, moreover, he is also the elected chair of the party.

Prachanda, Madhav Nepal, Khanal and former deputy prime minister Bamdev Gautam are all seeking a bigger role in the party, and by extension, the government.

There is a deadlock. Standing Committee member Raghuji Pant acknowledged the necessity to compromise to stop the party from splitting; however, he added that they haven’t found that magic formula yet.

China’s ambassador Hou recently met with senior leaders of the NCP including Madhav Nepal and Khanal as hectic negotiations for a power-sharing deal were going on between Oli and the dissident group led by Prachanda.

A number of political party leaders have termed the Chinese envoy’s series of meetings with the ruling party leaders as interference in Nepal’s internal political affairs.

There has been turmoil in the NCP for the past few months, but Oli tried to divert the attention of the dissident group by giving a nationalist slogan and updating Nepal’s political map by incorporating three strategically key Indian territories – Lipulekh, Kalapani and Limpiyadhura. This decision pacified the internal tussle for some time.

However, the turmoil started again has again after Oli accused the dissident groups led by Prachanda of hatching a conspiracy to remove him with the help of the southern neighbour.