No, the Shameful Attack on Sikhs in Kabul Still Doesn’t Justify the CAA

If India genuinely wants to protect vulnerable people in its neighbourhood, it needs to enact a wholesome asylum policy that doesn’t privilege one group of people over others, takes into account non-religious forms of persecution. 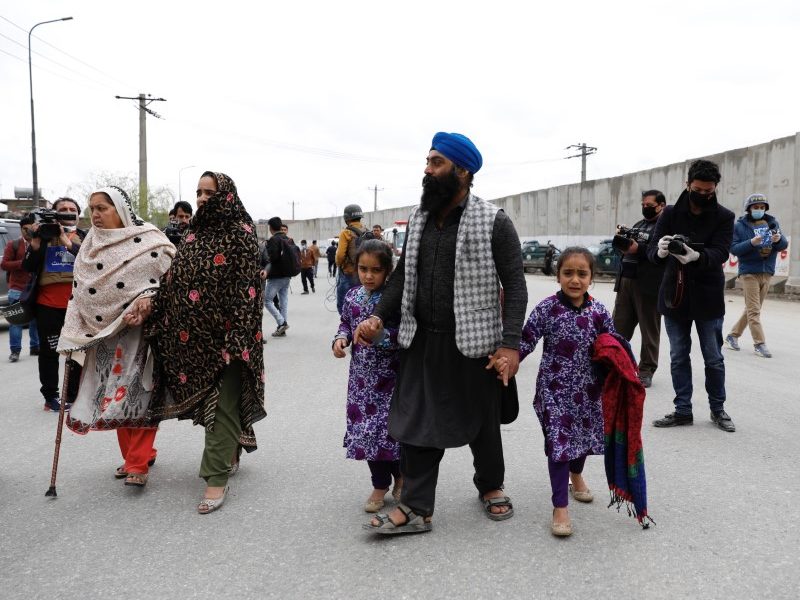 An Afghan Sikh family arrive to see their relatives near the site of an attack in Kabul, Afghanistan March 25, 2020. Photo: Reuters/Mohammad Ismail

On March 25, three gunmen stormed the Guru Har Rai Gurudwara in the Shor Bazar area of Kabul, capital of Afghanistan, killing at least 25 and injuring 15. Most of the victims belonged the Sikh minority of Afghanistan. The Islamic State Khorasan Province (ISKP), which is the Islamic State’s arm in Afghanistan and Pakistan, claimed the attack not long after the mindless bloodshed. The Indian government condemned Wednesday’s heinous attack in strong words, calling it “cowardly”.

While Sikhs have been targeted by Afghan militant groups in the past, this was certainly one of the biggest attacks on the minority in recent times.

Immediately after the attack, certain commentators and media houses began to push the importance of the Citizenship Amendment Act (CAA) to protect the Sikh and Hindu communities in Afghanistan. The CAA, which came into force earlier this year, eases Indian citizenship requirements for asylum seekers from six religious denominations from Afghanistan, Pakistan and Bangladesh who came to India on or before 31 December 2014. Sikhs are amongst those six beneficiary communities.

The CAA has come under intense criticism from domestic and international quarters for expressly leaving out Muslim refugees and thus, negating the constitutional principles of secularism and equality before law. Since it was tabled in parliament late last year, India has seen fierce street protests and civil unrest. The Bharatiya Janata Party (BJP)-led government has so far refused to recall the amendment.

After the attack, BJP leader from Delhi, Kapil Mishra, tweeted: “What would those who were distributing langar in Shaheen Bagh be thinking today?”

Mishra, who was banned by the Election Commission during the Delhi election campaign for a communally-loaded tweet, was not-so-subtly referring to the anti-CAA protestors who had been on a sit-in protest in East Delhi’s Shaheen Bagh area since 14 December. Sikh groups had set up langars (community kitchens) near the protest site to distribute free food, an act that received much praise. Mishra seemed to be suggesting that the Shaheen Bagh protestors, many of whom are Muslims, were responsible for the dastardly attack against Sikhs in Kabul.

Another pro-BJP commentator, Abhinav Prakash, who is also an assistant professor at Delhi University, tweeted that “all those opposing CAA are supporters & cheerleaders of such routine massacres.” Several other pro-Hindutva pages and voices argued how Wednesday’s attack proves that the CAA is much-needed. An editorial in the Free Press Journal argued that anti-CAA protestors “would not cry themselves hoarse against a law which neither directly nor indirectly seeks to hurt them” if they understood that “attacks on non-Muslims in Afghanistan and Pakistan are routine”.

These are highly misleading narratives that conceal not just the anti-constitutional nature of the CAA, but also the sociopolitical reality of Afghanistan. There is absolutely no doubt that the Sikh and Hindu minorities in Afghanistan are under constant threat of attacks by Islamist groups, such as the Taliban, ISKP and Haqqani Network.

Only two years ago, a deadly suicide bombing in Jalalabad, capital of Nangarhar Province, killed Avtar Singh Khalsa, the only Sikh candidate running in the country’s parliamentary elections that year. They were no better off during the oppressive Taliban regime during 1996-2001. According to a recent report by the Afghan news agency, TOLO News, 99% of Hindus and Sikhs in Afghanistan left the country over the last three decades.

But Hindus and Sikhs are not the only religious minorities living in fear of extremist aggression in Afghanistan, a Sunni Muslim majority country. Muslim minority sects, such as the Shias, too are under constant threat of attacks by Islamist militants. According to informal third-party estimates, Shias make up about 10-15% of the population of Afghanistan. The bulk of Afghan Shias belong to the Hazara ethnic group. 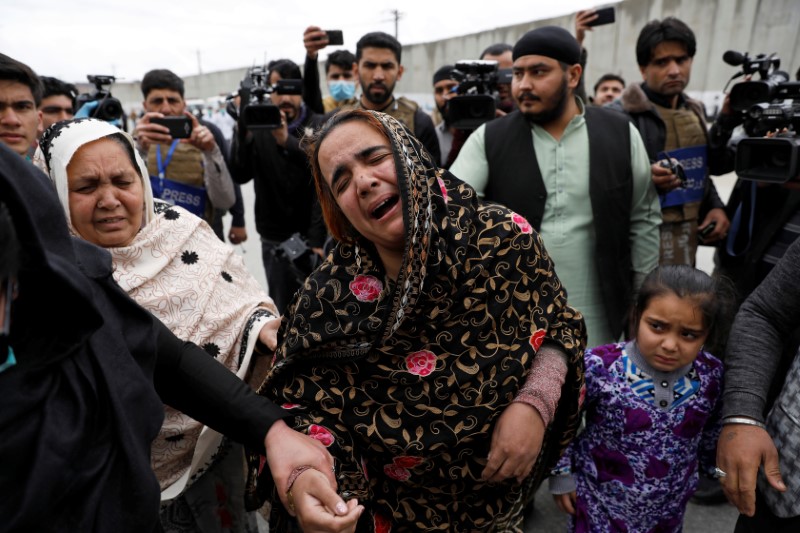 An Afghan Sikh woman mourns for her relatives near the site of an attack in Kabul, Afghanistan March 25, 2020. Photo: Reuters/Mohammad Ismail

Only two weeks back, on March 6, ISKP claimed an attack on a Hazara ceremony in the Shi’ite-dominated Dasht-e-Barchi neighbourhood of Kabul, which killed 32 people. In September 2018, at least 22 people, mostly Hazaras, were killed in an ISKP-linked twin explosion in the same area. Two people were killed and forty injured in July 2019 when ISKP militants attacked a Shi’ite mosque in the central province of Ghazni. At least 143 people were killed in four separate ISKP-linked attacks on Shi’ite areas and mosques in the 2016-17 period.

According to Javed Kohistani, a retired Afghan general and political expert, Daesh “was formed mainly based on anti-Shiite agendas for taking over Shiite governments in Syria and Iraq”. Sectarian tensions between Afghan Sunnis and Shias started emerging around 2011, fuelled by a complex mix of external and internal factors. Since then, particularly after the ISKP’s entry, Shias have faced the full brunt of Islamist extremism in the country.

According to Rustam Ali Seerat, an Afghan research scholar in South Asian University, an “unholy alliance” between the Taliban and Daesh has put Afghan Shias and Hazaras in a high risk of “massacres and even annihilation”. The Shi’ite Hazaras aren’t just much-favoured targets for Islamist militants, but also subjects of systematic discrimination by the Afghan government.

“On the one hand, the terrorist groups target Hazaras with deadly attacks and, on the other hand, the Afghan government removes Hazaras from the government [posts] and tries to prevent Hazara areas from prosperity in development and economic policies,” says Ahmad Behzad, a Hazara in the Wolesi Jirga (lower house of the Afghan Parliament).

There is also evidence of Hazaras facing social discrimination within Sunni-majority Afghan society. Melissa Chiovenda, an anthropology doctoral candidate at the University of Connecticut, told Al Jazeera in June 2016 that “even open-minded non-Hazaras with a high degree of education” admit that “they feel a certain discomfort when they encounter Hazaras in certain positions of authority in Afghanistan.”

Besides the Shi’ite minorities, the ISKP and Taliban are also accused of targeting Afghan Sunnis, both through targeted bombing of religious gatherings and politico-strategic attacks against government targets. Fair to say that the Afghan political-security landscape is far more complex than the straightforward ‘Muslims vs non-Muslims’ binary that pro-Hindutva groups in India routinely project.

Therefore, the fact that the CAA leaves out endangered Muslims, especially vulnerable sectarian minorities like the Shia Hazaras, is deeply problematic. India is already host to a significant population of Afghan Muslim refugees, including Shia Hazaras. Out of the 15,559 Afghan refugees registered with UNHCR India (according to the August 2019 factsheet), around 10% are Muslims, which includes Hazaras and other Shi’ite groups. The CAA won’t ease their pathway to Indian citizenship.

The current UN High Commissioner for Refugees, Michele Bachelet, also noted that the CAA discriminates against the Afghan Hazaras and Shia refugees in an intervention plea filed at the Supreme Court of India on March 4. Worse, the CAA also excludes under-threat Muslim sectarian minorities in Pakistan and Bangladesh, such as Ahmadiyas and Bohras.

Also read: The World Has a Long Battle Ahead With the Idea of ISIS

Besides, contrary to what pro-Hindutva groups argue, the CAA’s retrospective cut-off date means that Hindus and Sikhs who are currently living in Afghanistan (such as those targeted in Wednesday’s attack) and would want to seek asylum in India in the future won’t be able to avail its exclusive benefits. It’ll only protect those who have already fled Afghanistan and are no more under Islamist threat.

The CAA is ultimately bad in law, as argued by top constitutional experts. Sure, it is some sort of an asylum law, but a grossly discriminatory one. If India genuinely wants to protect vulnerable people in its neighbourhood, it needs to enact a wholesome asylum policy that doesn’t privilege one group of people over others, takes into account non-religious forms of persecution (like ethnic and political) and doesn’t put a hard cut-off date.

The CAA doesn’t achieve that. It is nothing more than a sloppy, half-hearted and prejudicial piece of legislation that doesn’t have any place in a secular country like India.

Angshuman Choudhury is a Senior Researcher at the Institute of Peace and Conflict Studies, New Delhi, and former GIBSA Visiting Fellow (Oct-Dec 2019) at the German Institute for International and Security Affairs, Berlin.