On Gender and Social Inclusion, Nepal's Politics Has a Long Way to Go 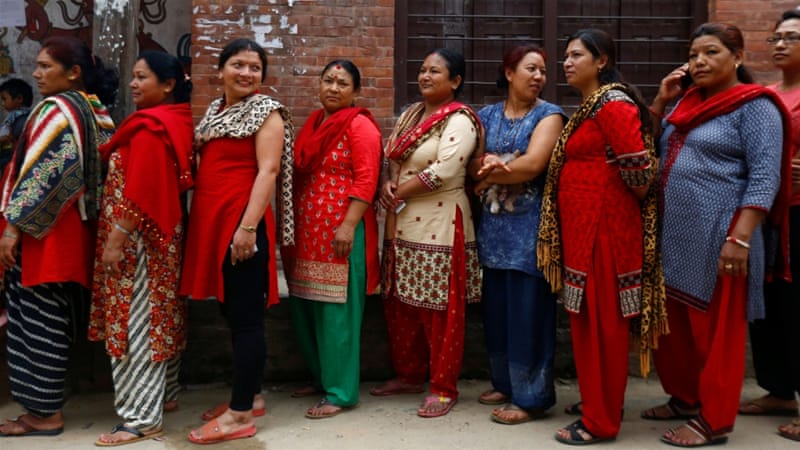 By law, women must comprise 33% of each legislative body in Nepal. Credit: Reuters

Over the past nine months, Nepal has held elections for local level officials, provincial assemblies and two houses of national parliament. In total, the country elected 334 members of parliament (275 in the lower house and 59 in the upper house), 550 representatives for seven provincial assemblies and local representatives at 753 local administrations across the country.

The election process was finalised on February 14, when the Election Commission confirmed results under the proportional representation system.

With the completion of elections, Nepal is well on its way to implementing the country’s 2015 constitution, which explicitly affirms a commitment to “build an egalitarian society founded on the proportional inclusive and participatory principles.” In accordance, Nepali law provides reserved seats in the government for women and certain caste and ethnic groups at all levels.

However, despite these laws, many marginalised groups – most significantly, women and Dalits – remain severely under-represented. Most political parties remain dominated by the higher-caste Khas Arya group, relegating other groups to less powerful positions.

However, some historically marginalised groups – most notably, the Madhesis – have achieved a higher degree of political representation through identity-based political assertion. But overall, the results suggest that Nepali political parties still have a long way to go in terms of transforming their attitudes towards social inclusion. 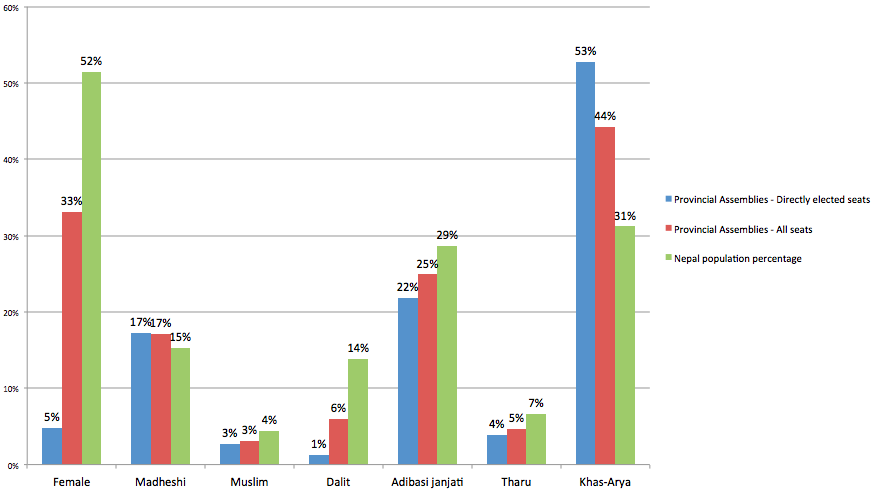 Nepal has provisions for social inclusion at each level of government.

Additionally, during campaigning, each party must nominate a female candidate for either the mayor/chair seat or the deputy mayor/deputy chair seat (they almost always choose the latter, as will be discussed below.) All seats at the local level are directly elected.

A mixed system is used at the provincial and national level. Each provincial assembly and the lower house of parliament comprises 60% directly-elected seats and 40% proportional representation (PR) seats. For the PR seats, voters cast ballots for a party rather than a specific candidate, and then the parties choose their representatives for the seats they have won.

By law, women must comprise 33% of each legislative body, and seats within the PR system are reserved for caste and ethnic categories based on the proportion of the population they represent. Such categories include Adibasi-Janjati (indigenous groups), Dalits, Madhesis, Tharus and Muslims. Notably, the Khas Arya also have their own reservation.

This system is different from the reserved seats for scheduled castes and scheduled tribes in the Indian Lok Sabha and state legislatures. While in India, the seats are directly elected, the reserved seats in Nepali legislative bodies are proportionally elected. This is a crucial difference because candidates who get PR seats owe them to their political party bosses, rather than to their own victory in an election.

As a result, the PR seats are widely seen as lacking power; occupants feel strong pressure to toe official party lines. In addition, the Nepali system differs from the Indian system in that the highest castes – the Khas Arya – are also included in the reservation system. 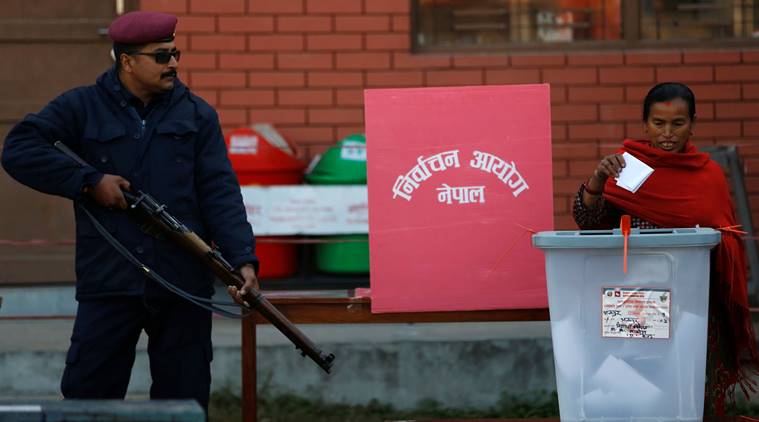 A woman casts her vote during the parliamentary and provincial elections in Bhaktapur, Nepal December 7, 2017. Credit: Reuters/Navesh Chitrakar

Women make up just over half of Nepal’s population. But women make up 33.1% of the lower house of parliament, mostly through the less powerful PR seats – only 3.6% of directly elected members of parliament are women. In provincial assemblies, women make up only 5% of directly elected seats. Local administrations are also dominated by men. Only 2% of mayors and rural municipality chairs are women since most parties fulfilled the inclusion requirement by nominating women for the deputy positions instead.

As a result, 91% of deputy mayors and chairs are women. This unusual contrast shows how parties have made a mockery of the principle of gender inclusion on which the law was based. 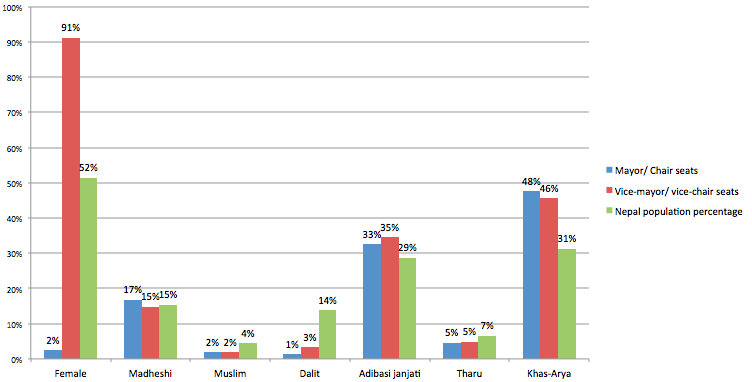 Likewise, Dalits are significantly under-represented at the national and provincial levels, with representation at roughly half or less than half their population share, mostly through the PR system. At the local level, reserved ward seats for Dalit women are an important avenue for inclusion, but Dalits still make up only 1% of mayors, even though they equal roughly 14% of the national population.

Muslims, who make up 4.4% of the population, are also significantly under-represented. They are the only categorised group to lack a single member in the upper house of parliament or national assembly.

Historically, marginalised Adibasi-Janjati groups remain under-represented at the national and provincial levels, though not quite as badly as women, Dalits or Muslims. However, Adibasi-Janjatis fared well at the local level, garnering 33% of mayor/chair and 35% of deputy mayor/deputy chair seats – higher than their population share of 29%.

However, it should be noted that these victories were concentrated in rural areas rather than urban areas. The situation of Tharus, an indigenous group from the Terai region who have their own reservation category, is similar to that of Adibasi-Janjatis, although they did not fare quite as strongly at the local level.

Madhesis, another historically marginalised group, have now achieved significant representation in government. At the national level, Madhesis make up 18.2% of the lower house of parliament – slightly more than their population share of 15.3% (the figure used by the Election Commission, although it is disputed by Madhesi activists). 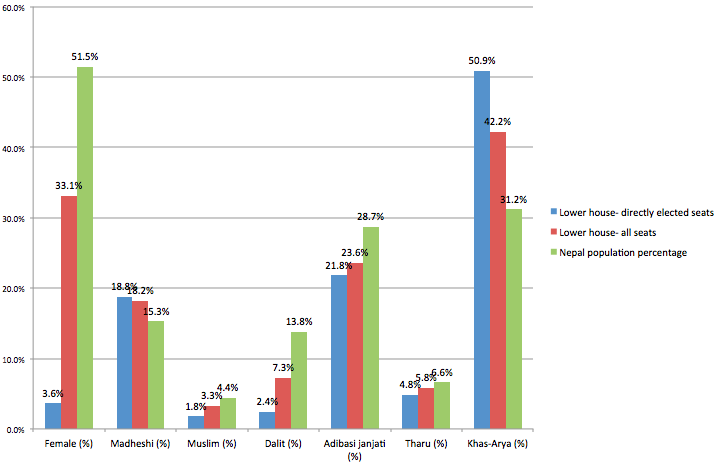 Madhesis are well-represented among the directly elected seats too. In Province 2, the Madhesi heartland, two Madhesi parties – the Rastriya Janata Party Nepal and Sanghiya Samajwadi Forum – together won a majority, although it now appears the Forum may align with the Left Alliance, which won provincial assemblies throughout the rest of the country. 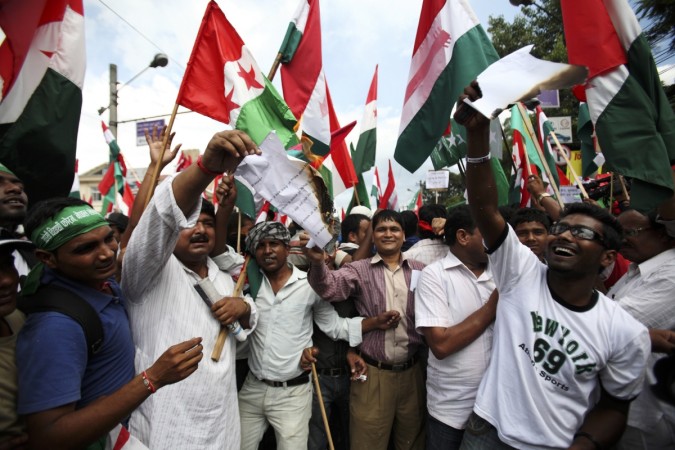 High caste people from the hills – the Khas Arya – remain singularly dominant in Nepali politics. They are the most over-represented group at all levels of government, especially in powerful positions. Khas Aryas make up only 31% of the national population, but they constitute a majority of seats in the national assembly and a majority of directly-elected seats in the lower house and in all of the provincial assemblies combined.

Khas Arya representation is boosted by the reservations system since they are included in it. At the local level, Khas Aryas control almost half of all mayor/chair and deputy mayor/deputy chair seats. It is also worth noting that within parties, central leadership remains dominated by Khas Arya, and the current prime minister, Khadga Prasad Oli, belongs to this group, as have all of 13 prime ministers since 1990. Lessons to be learnt

Results suggest Nepal’s political parties are yet to internalise the principle of inclusion. While following the letter of the law regarding reservations, as a whole, parties continue to privilege their Khas Arya members whilst neglecting significant other sections of the population.

The results also suggest that, for better or worse, historically marginalised groups that engage in identity-based political assertion achieve greater representation. The Madhesis, for example, staged widespread movements for their rights in 2007, 2008 and 2015-16, which contributed to their greater representation in government today.

Adibasi-Janajatis and Tharus, who are slightly less well-represented, have also organised along ethnic lines, although they have yet to build nationally-relevant political parties like the Madhesis.

The most under-represented groups, like women and Dalits, have lacked strong political organisation. For example, Dalits are spread throughout the country, lacking a heartland like the Madhesis, and remain victims of ongoing caste stigma – factors that hamper attempts at political organising.

It is worth noting that the ethnic and caste categories currently used for the reservations system can disguise ongoing discrimination. For example, the Adibasi-Janjati group consists of a variety of sub-groups, some of which fare better than others – the Newars, for example, are still much better-represented than the Tamangs. Likewise, Madhesi representation has been dominated by Yadavs and high castes, often leaving out other Madhesi populations.

In sum, Nepali politics still has a long way to go before it is truly inclusive.

Bhola Paswan is a Nepali journalist who focuses on Madhesi and Dalit issues. He writes for Kantipur, Nagarik and Naya Patrika, and tweets @paswanbhola. Peter Gill is an American journalist based in Nepal. He tweets @pitaarji.