Why Was Nepal PM Oli so Desperate to Woo Hindus?

Some of Oli’s decisions contradict atheist left ideology and secular principles. After becoming PM, he has taken a series of steps to woo the Hindu population, projecting himself as a leader of this community. 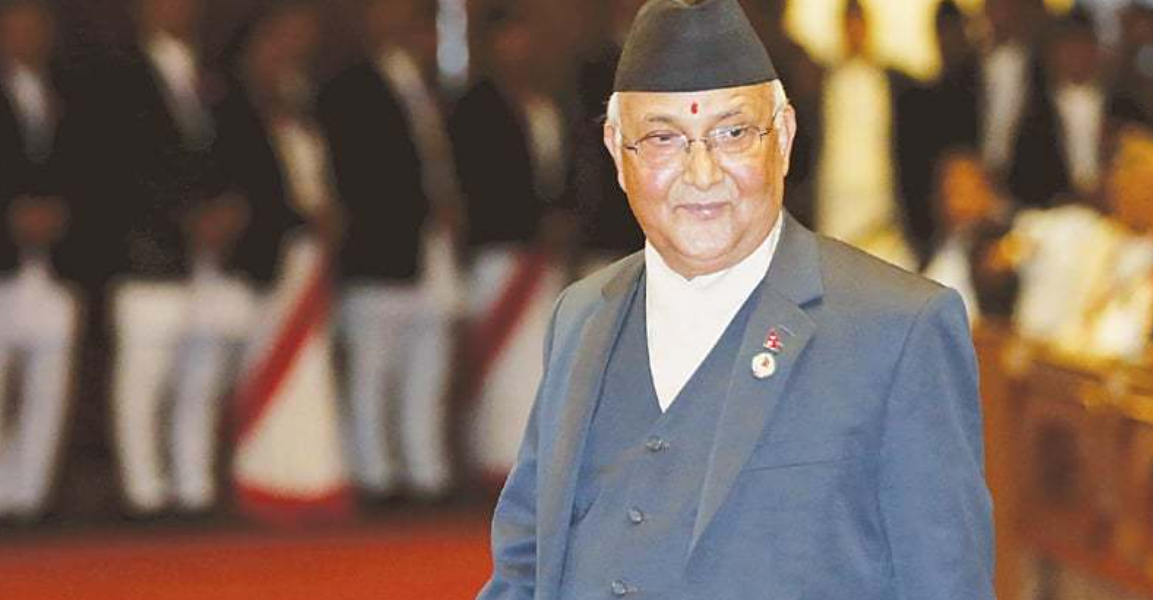 On Monday, Nepal Prime Minister K.P. Sharma Oli will seek a vote of confidence from the House of Representatives. This will be the culmination of the Nepal Supreme Court’s landmark decisions to reverse the dissolution of the lower house of parliament and invalidate the March 2018 merger that formed the Communist Party of Nepal.

With Pushpa Kamal Dahal’s ‘Maoist Centre’ formally withdrawing support from the government, ruling CPN-UML (Communist Party of Nepal (Unified Marxist–Leninist)) will have less than 15 members from the majority required in the 271-member parliament.

Oli has played on the backfoot since he recommended the dissolution in December, just before the ruling party’s rival factions were likely to vote against him in the House of Representatives.

But, one of the consistent themes in the last four months has been Oli’s wooing of the Hindu vote.

This is precisely what Prime Minister K.P. Sharma Oli did in 2018 – he took an oath in people’s name.

But, some of Prime Minister Oli’s decisions and activities contradict atheist left ideology and secular principles. After becoming prime minister, he has taken a series of measures to woo the Hindu population, projecting himself as a leader of this community.

According to the National Census 2011, 81.3% of the population identify themselves as Hindu, followed by Buddhism, which is 9%.

While his close aides defend his moves on the grounds that as a prime minister, he must protect all religions and cultures – it was a well-thought-out strategy to attract the support of Nepal’s Hindu population with an eye on the next elections.

In July 2020, Nepal Prime Minister K.P. Sharma Oli sparked a controversy when he said that the actual birthplace of Lord Rama, Ayodhya, was in Nepal and not India. It immediately ruffled feathers in India and led to a clarification from the foreign ministry. Nevertheless, it was seen by observers as an act by an embattled Oli to raise the twin bogeys of religious and nationalist sentiments, to buy time when he was fighting with his back to the wall against political opponents within his party.

Just before the dissolution of parliament by Prime Minister Oli in December, various royalist and Hindu forces organised a series of mass rallies in Kathmandu and worldwide. Those protests were initiated by multiple Hindu organisations and informal groups that opposed secularism and demanded a restoration of the monarchy. Compared to the past, the numbers of participants in those protests are gradually increasing.

A month after the dissolution, Oli became the first communist prime minister to visit Pashupatinath Temple to participate in a special puja. So far, Nepal has had six communist premiers. He pledged Rs 30 crore for installing a golden ‘jalahari’ at the temple during his visit. Following the prime minister’s instruction, Minister for Tourism, Culture and Civil Aviation provided money for the same purpose. It was installed a month later and inaugurated by President Bidhya Bhandari.

Placing a massive amount of gold inside the heritage site, many say, is against the provision of the Ancient Monuments Protection Act, 1956.

On April 20, Prime Minister Oli organised a programme at his official residence, Baluwatar, to worship the idols of Ram Sita and Lakshman before sending them to install at Madi of Chitwan. Those idols were dispatched to Chitwan in separate chariots.

The next day on the auspicious occasion of Ram Navami, Minister for Tourism, Culture and Civil Aviation, Bhanu Bhakta Dhakal, installed the idols in Madi in the presence of a thousand people. The Madi area of Chitwan is the same place that Oli last year had claimed as the birthplace of Ram, not Ayodhya. Since then, he has been pushing to develop the Madi area and build the necessary infrastructure.

It may be just a coincidence, but it carries a symbolic meaning. On April 21, three leaders of the Rastriya Prajatantra Party, a royalist and pro-Hindu party, joined Prime Minister K.P. Sharma Oli-led government. Oli prominently welcomed them in the prime minister’s official residence, Baluwatar.

These activities cannot be taken as a duty of the prime minister to protect and promote all culture and religions as claimed by his party leaders. Oli’s activities are driven by his party politics and possible electoral advantage because a large chunk of the Hindu population remains dissatisfied with secularism. The Hindu state supporters are constantly saying that there has been a systematic attack on the Hindu religion after the country adopted a secular policy.

Though it is impossible to reverse the current political course, they seek an influential person to patronise their agenda. The RPP, led by former foreign minister Kamal Thapa, has been advocating the return of monarchy and the Hindu state, but a large chunk of people who want to see a revival of monarchy do not support him and his party.

Additionally, despite their strong commitment to secularism, there is a chunk of leaders and cadres in the major parties who want to see Nepal as a Hindu state. For instance, in 2018, when Nepali Congress (NC) organised its Mahasamiti meeting, the party’s second most powerful decision-making body after the general convention, out of 1,500 Mahasamiti members, about 700 representatives launched a signature campaign in favour of a Hindu state. But NC leadership did not accept the demands due to the party’s commitment to secularism. Similarly, a section of leaders and cadres in CPN-UML and other parties who wish to see Nepal as a Hindu state do not come out openly.

All these scenarios may have promoted Oli, whose political capital had got even more depleted after the Supreme Court cancelled the unification of the Nepal Communist Party, to think that he should take this constituency into confidence, with an eye on the elections on the horizon. He has been pitching for early elections to justify his move of Parliament dissolution. Oli has been roping in the royalist and Hindu forces to embolden his position.

A Communist Party of Nepal member Ananda Prasad Pokhrel, who is close with Oli, said people who believe in cultural nationalism are going to vote for them in the next elections. He said, “A large number of Hindu and Buddhist supporters will support us in the election.”

Incidentally, the same constituency – which also includes a section of security forces and bureaucracy – that calls for changing Nepal’s constitutional secular status also believes that there was an Indian hand behind the removal of the monarchy in Nepal. So, nationalism is another issue that is contributing to bringing Oli and this group of voters together. Compared to other contemporary leaders, only Oli, they believe, can firmly stand up to India.

Kamal Dev Bhattarai is a Kathmandu-based journalist and analyst.