Myanmar Polls: Here's Why the Rohingya Have No Reason to Celebrate Suu Kyi's Victory

Suu Kyi could carry out reforms but they are unlikely to weaken the army’s control and, moreover, less likely to address the plight of the Rohingya. 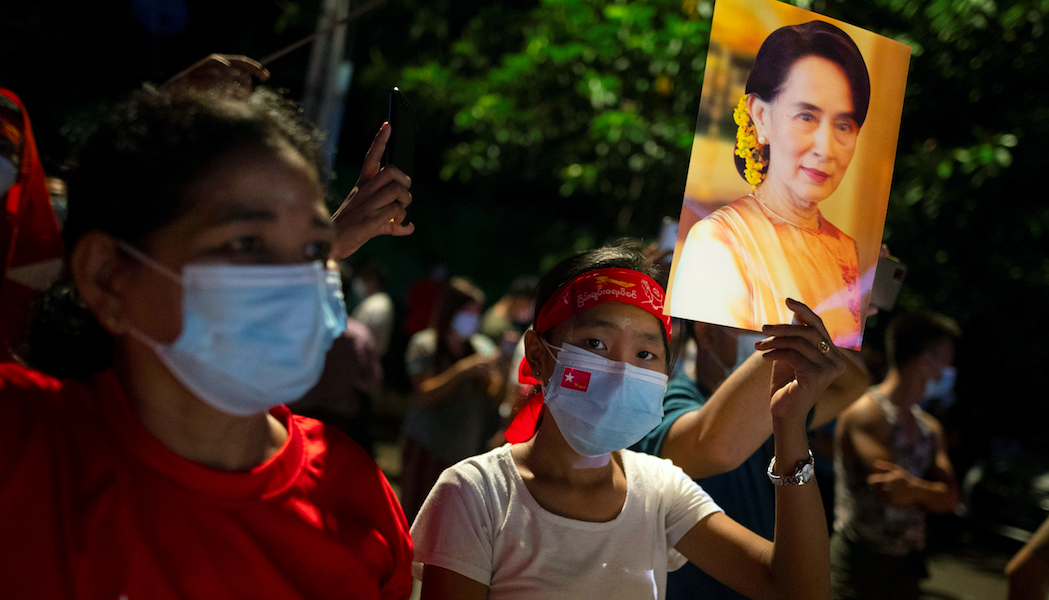 A supporter of National League for Democracy holds a picture of Aung San Suu Kyi as she waits for results outside the party headquarters after the general election in Yangon, Myanmar, November 8, 2020. Photo: Reuters/Shwe Paw Mya Tin

The Aung San Suu Kyi-led National League for Democracy (NLD) has confirmed its majority in the just concluded national elections of Myanmar. Though the official results are yet to be announced, according to Yway Mal, an independent vote-counting group, NLD has secured 396 seats in the parliament, more than 322 seats required to form the next government.

There were 5,643 candidates from 91 parties contesting 1,119 seats both at the state and national level. It is expected that in her successive term, Suu Kyi may carry out some reforms but they are unlikely to weaken the army’s control over the country and, moreover, less likely to address the plight of the Rohingya.

Historically, Myanmar was under military rule from 1962 until the country witnessed its first substantial free and peaceful election in 2015. However, even after, the army remained in powerful position as the military-drafted constitution of 2008, that was passed through a controversial referendum, automatically gives them 25% of the reserved legislative seats under Article 14. Article 17 b reserves the nomination of ministers of defence, internal security and border affairs by the military. It also has power to take over the country during emergency (40 c) and set up the National Defence and Security Council under Article 201 during crisis with military representatives.

Discrimination against the Rohingya is politically and militarily entrenched in Myanmar. Despite talking about ethnic peace and unity in the country, during the 2015 elections Suu Kyi adopted a pragmatic approach and did not choose a Muslim or Rohingya candidate for the NLD party which electorally paid her off. After she won the elections, Suu Kyi largely remained silent even when hundreds of Rohingya were forced to flee due to military crackdown against them in October 2016. This crackdown was carried out after the “insurgent terrorists” killed nine Myanmarese border guards on October 9, 2016 at Bangladesh-Myanmar border.

The latest Rohingya crisis is the result of the confrontation between the military and the Rohingya militant groups which stimulated after the Harakah-al-Yaqin, also called the Arakan Rohingya Salvation Army (ARSA), attacked 30 police posts and an army base in Maungdaw, Buthidaung and Rathedaung townships on the northern side of the Rakhine state on August 25, 2017. In that attack, 12 Myanmar soldiers and officials, and 80 insurgents were killed.

Soon after, around 3,000 Rohingya homes were burnt down; women and girls were gang-raped by the soldiers and fleeing civilians were executed by them. Also, in this violence, about 30,000 ethnic Rakhine Buddhists and Hindus have been displaced. Since August 2017, more than 656,000 Rohingya fled from Myanmar into Bangladesh alone. Rohingya refugees are reflected in rain water along an embankment next to paddy fields after fleeing from Myanmar into Palang Khali, near Cox’s Bazar, Bangladesh November 2, 2017. Reuters/Hannah McKay/File Photo

Whilst the world accused Myanmar of “ethnic cleansing and genocide”, comparing it with past humanitarian tragedies of Darfur, Bosnia, and Rwanda, Suu Kyi sided with the military. After the August 2017 attack, state counsellor Daw Aung San Suu Kyi held a meeting with the Union ministers for home affairs, defence, border affairs, state counsellor’s office and the president’s office as well as the national security advisor. ARSA was declared as a terrorist organisation, and various committees were formed to undertake the tasks to ensure security, stability and peace, rule of law and regional development in Rakhine State.

In the counter-attack by the army, damning evidences presented by the Independent International UN fact-finding mission on Myanmar report that came in September 2018, substantiated the human rights abuses and violations by Myanmar’s military and security forces against Rohingya. Even, the Kofi Annan Advisory Commission which submitted its recommendations to Suu Kyi’s government on August 24, 2017 proved to be a futile exercise to resolve the crisis.

The Kofi Annan Commission’s report called for developing comprehensive state policies to surmount socio-political, economic, legal and humanitarian crisis in Rakhine. It also recommended for setting up an implementation committee which was set but, later, two prominent members of the implementation committee resigned, describing the committee as ‘cheerleading squad’ and ‘white-wash operation’ for the government.

Also read: ‘Textbook Example of Ethnic Cleansing’: A Timeline of the Rohingya Crisis

At present, approximately 1.9 million ethnic Rohingya are deprived of citizenship, while more than 723,000 Rohingya were forced to flee from Arakan (Rakhine) – their home in Myanmar – to neighbouring Bangladesh, the world’s largest refugee camp at Cox’s Bazar and some to even India. In fact, Bangladesh has been receiving Rohingya refugees since 1978. However, only 210,000 Rohingya were repatriated under the repatriation agreement signed by Bangladesh with the then government of Socialist Republic of the Union of Burma.

Again in 1991-92, when Myanmar’s military intensified their crackdown, 250,000 Rohingya fled into Bangladesh to escape violence and persecution. To address the situation an agreement was signed between Bangladesh and Myanmar acknowledging the lawful residence of the Rohingya in Burma. Under it, Myanmar agreed to take all necessary measures to put an end to the outflow as well as to encourage safe and voluntary return of those who had already left Myanmar. 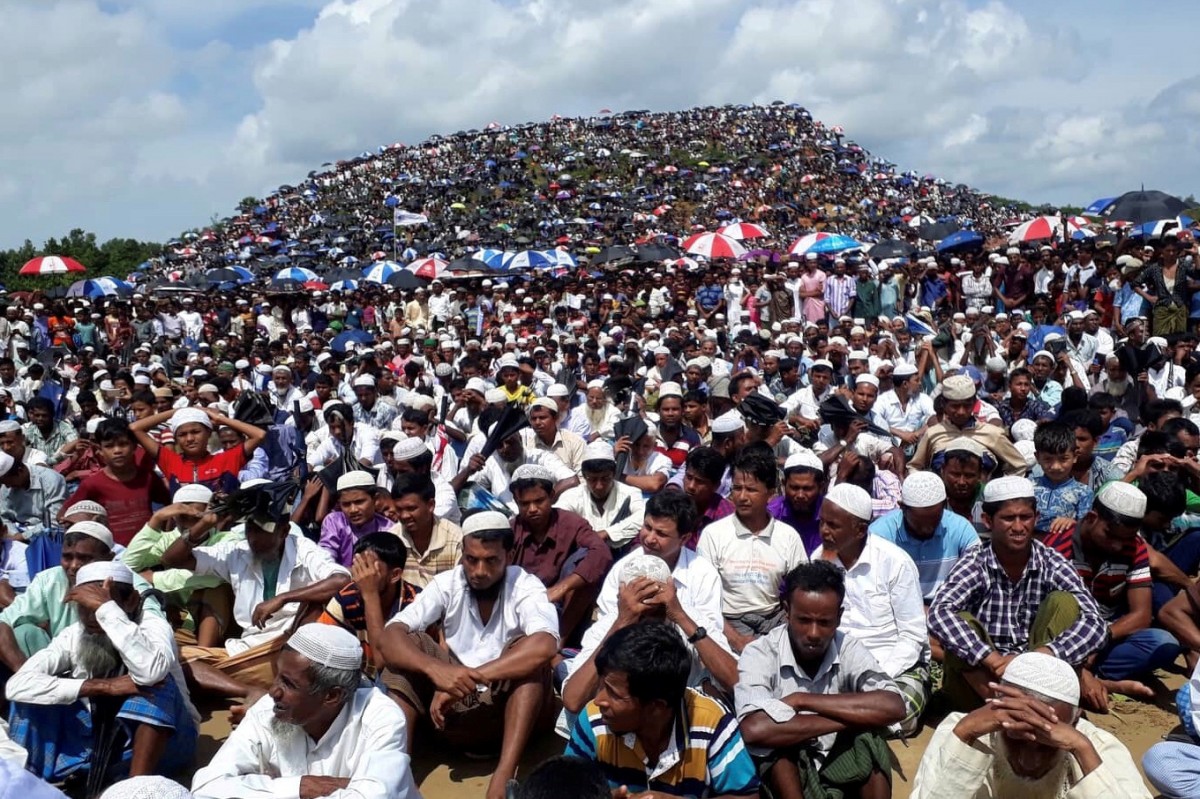 In the 34-page election manifesto of 2020, NLD coined three main election agendas: to address ethnic concerns and achieve internal peace; a constitution that ensures a genuine democratic federal union; and sustainable development. Interestingly, the NLD reiterates constitutional amendments to limit the role of military in the allocation of parliamentary seats: down to 15% after the 2020 election, 10% after 2025 and 5% after 2030. In early 2020, Suu Kyi proposed amendment for it but failed.

According to a Reuters report, there were about 200 people on the voter list in 2015, but in 2020, there was no voter list in the Rakhine state. This is because the military suggested against conducting elections in five townships including the Rakhine state due to security reasons. Whilst the Rohingyas were denied of voting, Aye Win, one of the six Rohingyas who have been permitted to contest elections, told Reuters, “There was little hope of victory unless many more Rohingyas were granted citizenship ahead of the vote”.

It is important to note here that till 2010, Rohingya with “temporary scrutiny cards” used to cast their votes. In 2010, Rohingya parties contested elections but could not win even a single seat. In 2015, they were disenfranchised.

As long as the political and military leadership of Myanmar stand firm on their stance on the Rohingya, their plight will continue. Those who are still in Myanmar may face further violence and those fled from the country will have to remain as refugees.

Amit Ranjan is a research fellow at the Institute of South Asian Studies, National University of Singapore and Kaveri is PhD scholar at Tata Institute of Social Sciences, Mumbai.