M.M.C. Ferdinando's testimony before the Sri Lankan parliament’s Committee for Public Enterprises had sparked political controversy with the opposition in both Sri Lanka and India criticising their respective governments. New Delhi: The head of Sri Lanka’s electricity authority M.M.C. Ferdinando has resigned just three days after testifying that Sri Lankan president Gotabaya Rajapaksa had spoken to him of Indian Prime Minister Narendra Modi having pushed for a power project to be handed over to the Adani group.

His testimony before the Sri Lankan parliament’s Committee for Public Enterprises (COPE) last Friday, June 10, sparked a political controversy with the opposition in both Sri Lanka and India, targeting respective governments for violating redlines.

I have accepted the letter of resignation tendered to me by the CEB Chairman Mr MMC Ferdinando. Vice Chairman Nalinda Ilangaokoon will take over as the New Chairman CEB.

While the minister cited no reason, a copy of the resignation letter, uploaded by Sri Lankan newspaper The Morning, stated that Ferdinando was leaving due to a “personal reason”.

On Thursday, June 9, the Sri Lankan parliament passed an amendment to the electricity act – amid strong opposition – that removed the requirement for competitive tendering to supply power. The principal opposition SJB had claimed that the Act had been amended specifically to favour the Indian conglomerate Adani, which had been given a contract to construct a wind power project on the northern coast.

A day later, then CEB chair, M.M.C. Ferdinando told the parliamentary committee in a public hearing that President Rajapaksa had summoned him on November 24 last year and told him that “India’s Prime Minister Modi is pressuring him to hand over the project to the Adani group”.

The CEB head also added that he, thereafter, wrote to the Finance Secretary to take appropriate steps as per instructions from President Rajapaksa. 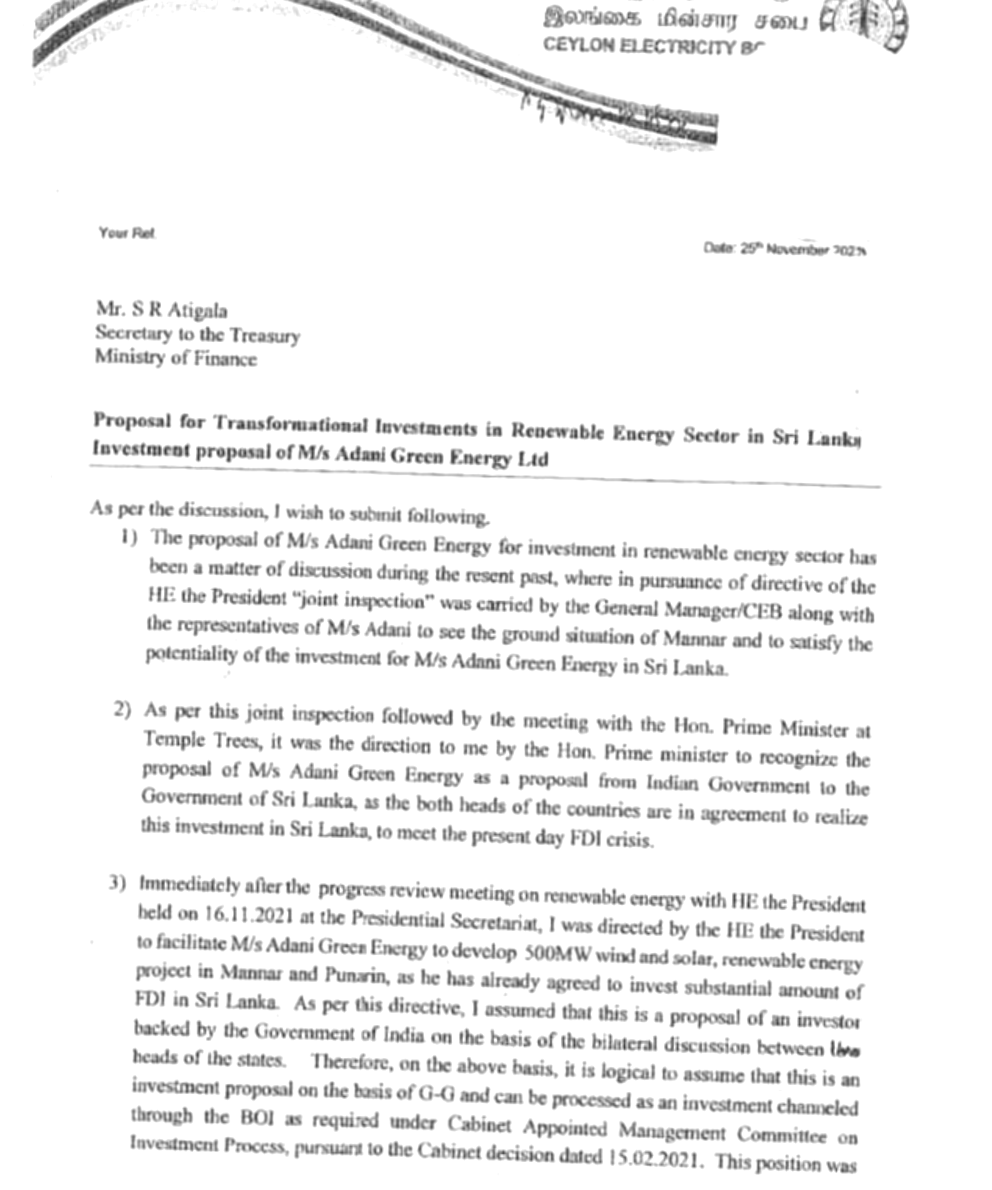 Copy of letter written by Sri Lankan Central Electricity Board Chairman to Finance secretary on November 25, 2021.

“…direction by the Prime Minister to recognize the Adani Green Energy proposal as a proposal from Indian government to the government of Sri Lanka as both heads of the countries are in agreement to realise this investment in Sri Lanka, to meet the present day FDI crisis,” the CEB head wrote to S.R. Atigala, secretary to the treasury, ministry of finance.

Responding to the claim on Saturday, Rajapaksa denied asking for the project to be given to any specific entity.

Re a statement made by the #lka CEB Chairman at a COPE committee hearing regarding the award of a Wind Power Project in Mannar, I categorically deny authorisation to award this project to any specific person or entity. I trust responsible communication in this regard will follow.

The Sri Lankan President’s office also issued a separate statement. “President Gotabaya Rajapaksa categorically stated that he had not at any time given authorisation to award a wind power project in Mannar to any person or any institution,” it said.

Late on Saturday night, Fernando also sent an apology to the chair of the parliamentary panel, saying that he had withdrawn his statement.

“During this discussion, I became so emotional due to pressures and unreasonable allegations levelled against me to issue this official letter of request. Therefore, due to unexpected pressure and emotions, I was compelled without limitation to express the word ‘India agamathi bala kara bawa kiwwa’ (stressed by the Hon Prime Minister of India), which is totally incorrect. Hence, I wish to withdraw the relevant statement and record my apology unconditionally,” Ferdinando said in his statement.

The Sri Lankan opposition had threatened to bring a privilege motion against Ferdinando for making a false statement before the parliamentary panel.

Meanwhile, the Adani group, in a statement, said it was “disappointed” by the political controversy over its contract for a power project in Sri Lanka. “Our intent in investing in Sri Lanka is to address the needs of a valued neighbour. As a responsible corporate, we see this as a necessary part of the partnership that our two nations have always shared. We are clearly disappointed by the detraction that seems to have come about. The fact is that the issue has already been addressed by and within the Sri Lankan Government,” an Adani group spokesperson told NDTV.