The opposition, led by former president Abdulla Yameen, had been spearheading the campaign, chiefly targeting President Ibrahim Solih, and claiming that Indian military officers were stationed in Maldives. 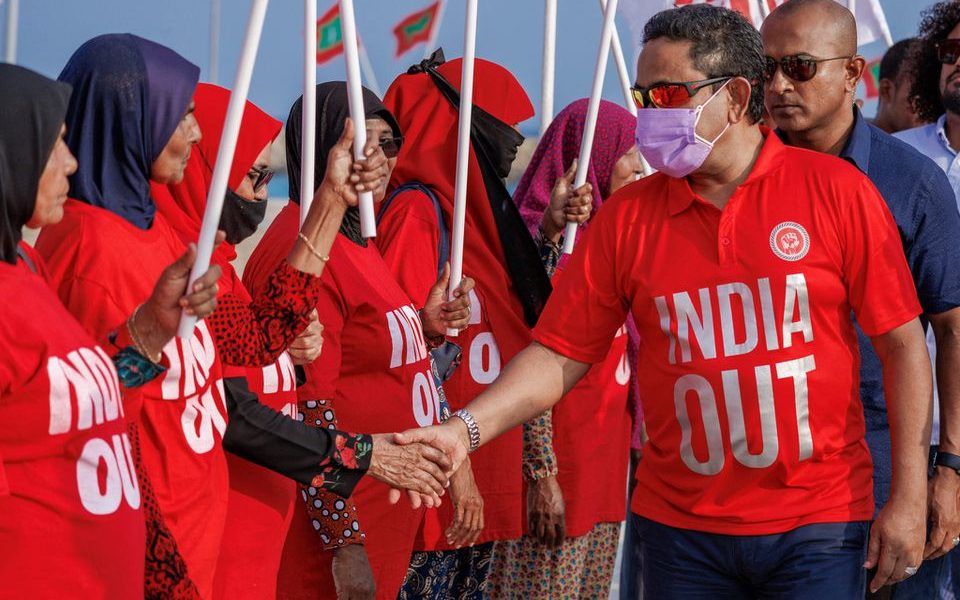 New Delhi: Maldives President Ibrahim Solih has signed a decree stating that the opposition’s ‘India Out’ campaign is a “threat to national security”. This allows security agencies to take down campaign banners and provides constitutional cover to take action against opposition parties.

The opposition, led by former president Abdulla Yameen of the Progressive Party of Maldives (PPM), has been spearheading an ‘India Out’ campaign for over the last year propagating the unproven claim that Indian military officers stationed in the Indian Ocean island nation are a violation of Maldives’ sovereignty. The Maldives foreign and defence ministries have repeatedly denied the presence of Indian military in the islands.

The campaign’s implicit target is President Solih and Maldivian Democratic Party, both perceived as close to India.

Earlier, the ruling party had circulated a draft legislation that would have criminalised campaigns that harm Maldives’ foreign relations. However, this has seemingly gone into cold storage.

The Maldives parliament’s security service committee had held public hearings in February and March of top government ministers and officials to assess the implications of the ‘India Out’ campaign. The committee has not finalised its report yet.

The notification stated that the “the campaign against India, which exploits the freedom of expression and freedom of assembly guaranteed under the Constitution, is an organised campaign that intends to disrupt the longstanding bilateral relations between Maldives and India, as well as the important efforts to maintain peace and security of this region, by threatening the peace and security of the Maldives”.

He also cited Maldives’ obligations under the Vienna Convention on Diplomatic Convention and the International Convention on the Elimination of all Forms of Racial Discrimination.

Asserting that the National Security Committee had empowered security agencies to take such campaigns, the decree concluded, “According to the powers and responsibilities vested in the President under Article 115 (c), (d) and (i) of the Constitution of the Republic of Maldives, by this Decree, I affirm my decision to stop campaigns of the aforementioned nature, and order all relevant agencies of the State to implement the decision respectively”.

Following the decree, Maldivian media reported that police had confiscated ‘India out’ banners from buildings after giving them a day’s notice. “Police officers have also confiscated a 50-foot banner from the house of former President Abdulla Yameen, the leader of the opposition Progressive Party of Maldives (PPM),” said a report of the state-run PSM News.

The opposition coalition announced on Thursday that it would mount a legal challenge. People’s National Congress leader Abdul Raheem Abdulla ‘Adhurey’ told reporters that the decree was unlawful. “We are discussing with our legal team on challenging the decree,” he said.