As Maldives Lifts Emergency, India Calls It a 'First Step' to Reinstating Rule of Law

India has called upon Maldives to implement the February 1 order of the Supreme Court which triggered the events that led to president Abdulla Yameen announcing a state of emergency 45 days ago. 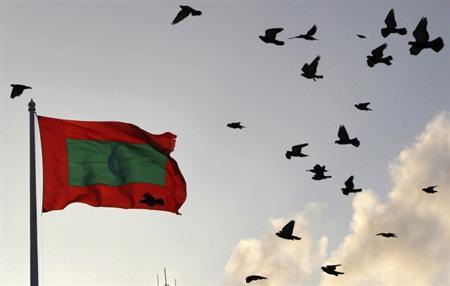 A Maldives national flag flutters as pigeons fly past during the morning in Male. Credit: Reuters/Dinuka Liyanawatte

New Delhi: India has given a muted welcome to the lifting of the state of emergency in Maldives, described it as a “first step” towards restoration of a credible political process before the presidential elections and implementing the Supreme Court’s February 1 order.

On Thursday, Maldives president Abdulla Yameen announced that the state of emergency has been lifted. The emergency would have anyway lapsed on Thursday night as the period of its validity of 45 days would have comes to an end.

“We welcome the revocation of the state of emergency in the Maldives. While this is one step towards addressing the issues related to the prevailing political situation in that country, a number of concerns expressed by the international community still remain to be addressed,” the press release issued by Ministry of External Affairs (MEA) on Thursday evening said.

Significantly, India has called upon Maldives to implement the February 1 order of the Supreme Court which triggered the events leading to president Yameen declaring a state of emergency.

We, therefore, call upon the Government of the Maldives to restore all Articles of the Constitution, to allow the Supreme Court and other branches of the judiciary to operate in full independence, to promote and support the free and proper functioning of Parliament, to implement the Supreme Court’s Full Bench order of 1 February 2018 and to support a genuine political dialogue with all opposition parties.

In a late-night order, the five judges of the Maldives’ Supreme Court had issued a ruling that called for the release of political prisoners, ordered their re-trial and reinstated 12 disqualified parliamentarians.

It is interesting to note that India has specifically pointed out that the February 1 order was passed by a “full bench” of the Supreme Court.

After the arrest of Chief Justice Abdulla Saeed and Judge Ali Hameed, the truncated Supreme Court had passed another order which had annulled the Feb 1 ruling. The Maldives government had since claimed that the arrested judges, along with other detainees including former president Maumoon Abdul Gayoom were plotting a coup to bring down the administration.

India also, for the first time, specifically referred to the scheduled president elections this year and the need to restore credibility to the process before the dates are announced. “It is important for the government of the Maldives to ensure credible restoration of the political process, as well as the rule of law, before the elections are announced this year,” said the MEA press release.

Also referring to the polarised political situation in the Indian ocean island state, the MEA communique stated, “As a neighbour whose security is closely intertwined with that of the Maldives, India wishes to see a stable, peaceful and prosperous Maldives that meets the aspiration of its citizens”.

Also, two days earlier, the prosecutor general charged the detained former chief justice, Supreme court judge, former president Gayoom and five others for orchestrating an act of terrorism. A criminal court also ordered that they will be remanded during their trial.

India has been unusually vocal about the current situation in Maldives, but has not taken direct interventionist steps like a military convoy or special envoy as requested by the Maldivian opposition.

The US ambassador to Maldives has also tweeted that the lifting of the emergency will not make much of a difference if “politically motivated prosecutions” continue.

The #Maldives #StateOfEmergency is over, but politically motivated prosecutions continue, and many citizens remain in jail for exercising their fundamental rights. For #Democracy to return, independent and impartial justice and a fully functioning #Majlis are essential.

The Maldivian opposition also stated that decision to lift the emergency will not make any practical difference in the ongoing crisis as the president no longer abides by laws or the constitution.

President Yameen lifts the SoE because he now has no need for it. He has overrun the judiciary and legislature, arrested hundreds unlawfully and introduced a “new normal” in the #Maldives – full dictatorship. We will not give up, we will fight and we will overcome.

“The Joint Opposition continues to reiterate that the declaration of the state of emergency is unlawful and was used to further deepen Yameen’s grip on power and lifting of it does not change the worrying direction of travel in the Maldives. All opposition leaders are jailed, 31 out of 45 opposition MPs, including the opposition parliamentary group leader, are facing trial or charges. The regime continues to use the parliament to rubber stamp laws to legitimise the dictatorship and the entire judiciary has been brought under Yameen’s control,” said a press release issued by the Joint Opposition.