A foreign exchange crunch in Sri Lanka has led to a shortage of essential goods and power cuts that last up to 13 hours a day. 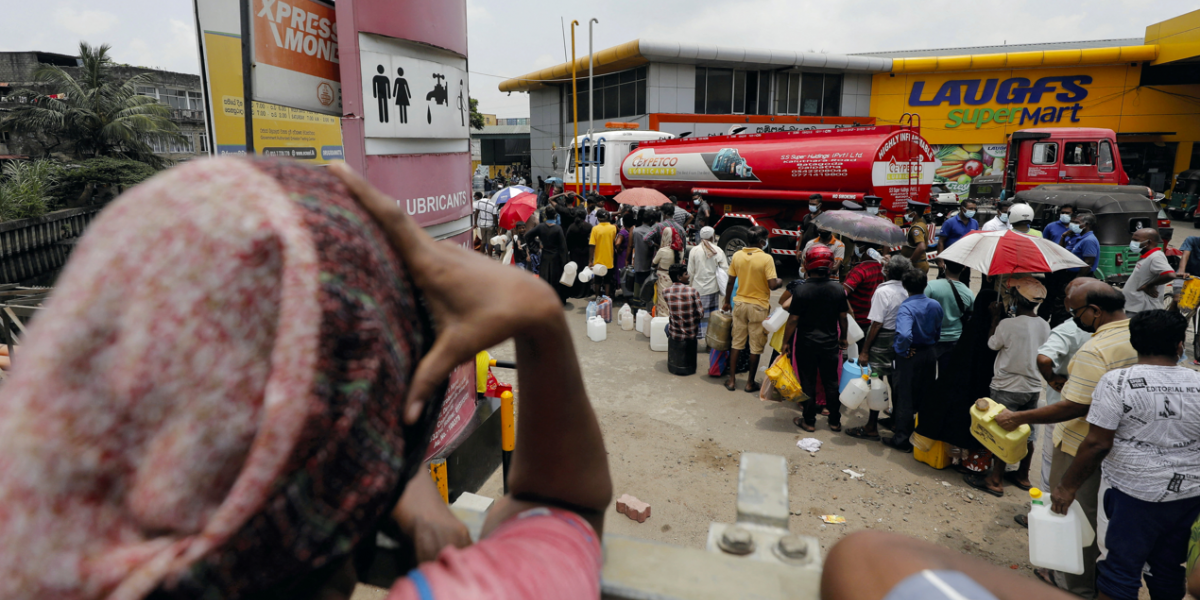 People stand in a long queue to buy kerosene oil for kerosene cookers amid a shortage of domestic gas due to country's economic crisis, at a fuel station in Colombo, Sri Lanka March 21, 2022. REUTERS/Dinuka Liyanawatte

New Delhi: Sri Lanka is grappling with the worst economic crisis in decades, which has spiked the prices of essential commodities like rice, milk powder, cooking gas and fuel.

News reports said that school exams were cancelled because Sri Lanka ran out of paper.

People have taken to the streets demanding Sri Lankan President Gotabaya Rajapaksa’s resignation for failing to address the worst economic crisis in the island nation.

With skyrocketing prices of essential goods, Sri Lankan Tamil refugees are crossing the sea and arriving in Tamil Nadu. According to news reports, an estimated 2,000 to 4,000 refugees may land in the southern state of India.

According to news reports, a foreign exchange crunch in Sri Lanka has led to a shortage of essential goods and power cuts that last up to 13 hours a day. Due to power cuts, Sri Lanka’s stock market on Friday halted trading for 30 minutes – the third suspension in two days.

But how did Sri Lanka get here?

The Wire’s Sumedha Pal had spoken to R. Ramakumar, professor at the Tata Institute of Social Sciences, who explained the roots of the Sri Lankan economic crisis.

While exports contribute around 23% of the country’s GDP, the tourism sector contributes around 12% of the GDP.

Sri Lanka is majorly dependent on the export of non-food items like rubber, tea, garments, coconut, spices etc. The exports of these commodities suffered as global commodity prices fell over the past decade, Ramakumar wrote in a Twitter thread.

2/ To begin with, Sri Lanka's economic growth rate was on a decline from around 2012 itself. Its GDP growth rate fell rather steadily after 2012. The post-war growth acceleration petered out soon, and the current account deficit widened in the absence of export growth. pic.twitter.com/oTj02gXIz8

The country imports essential items such as rice, wheat, wheat flour, pulses, sugar and medicines. It imports 100% of its petroleum needs too. And that was affected due to a decline in the country’s foreign reserves.

According to Ramakumar, Sri Lanka’s economic growth rate has been steadily declining since 2012. In the absence of export growth, the country’s current account deficit [exports – imports] widened.

A decline in exports leads to less foreign currency into the country. However, this was not the only reason why foreign reserves started to deplete.

The Easter bomb blasts of 2019, which killed about 253 people, took a severe hit on the flow of tourists in the country. This led to major strains on the foreign exchange reserves.

As per DW, there was a 70% drop in tourists after the attacks. However, towards the end of the year, it started to revive slowly.

But the COVID-19 pandemic in March 2020 made the situation worse.

Sri Lanka was faced with a triple whammy due to the pandemic: tourist inflows and tourism revenues fell further; exports of tea and rubber declined due to lower demand; and remittances, another booster to the foreign exchange reserves, also fell as Lankans across the globe lost jobs.

Therefore, the country faced an acute shortage of foreign currency or a balance of payment crisis.

Due to the pandemic, the government raised budget expenditures and cut taxes, lowering the country’s revenue. Therefore, fiscal deficit exceeded 10% in 2020 and 2021.

Meanwhile, the government on April 29, 2021 decided to ban the import of chemical fertilisers and any other agrochemicals to make the Indian Ocean nation the first in the world to practice “organic-only” agriculture. The move was aimed at reducing pressure on forex reserves.

However, this decision severely impacted tea, rubber and other non-food item exports, which accounted for a bulk of dollar earnings.

As per a report in Al-Jazeera, tea is Sri Lanka’s single biggest export, bringing in more than $1.25 billion a year, making up almost 10% of the country’s export income.

The government’s move further led to a sharp rise in prices of daily food items. Sugar, rice and onions have soared over twice, with sugar even touching record Rs 200/kg; kerosene oil and cooking gas prices are surging.

Ramakumar in his blog post has explained how the decision to ban chemical fertilisers was taken under the pressure from President Rajapaksa’s group of advisors that included a medical doctor, who reportedly convinced him that the use of chemicals in agriculture was leading to the spread of chronic kidney disease. Sri Lankan scientists have in fact argued that there are no links between the use of chemicals as farm inputs and kidney disease.

The Rajapaksa government later partially lifted off the ban; however, the damage was already done.

Sri Lanka is already knee-deep in debt, which is now running at around $51 billion. A bailout from the International Monetary Fund (IMF) seems to be the only option in such cases. However, IMF loans come with their own stringent terms and conditions.

And, these moves will likely be extremely unpopular in a country that’s already struggling to make ends meet.

Sri Lanka – which must pay about $4 billion in debt this year – will also seek World Bank assistance after it enters into an IMF programme, Reuters reported, citing two sources familiar with the matter.