Before Kartarpur Corridor Launch, Trepidation, Righteousness and the Shadow of Kashmir

While the infrastructure on both sides of the border seems to be ready to cope with the large influx of pilgrims, India and Pakistan have also been shadowboxing in the final run-up, with an eye on the Sikh community. 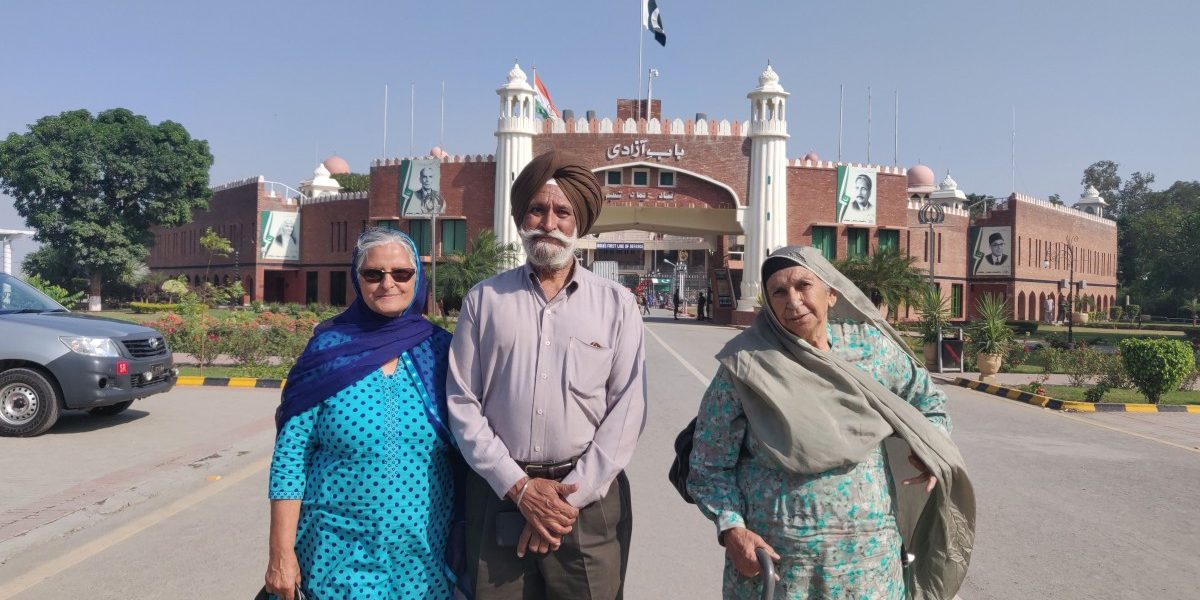 Ranjit Kaur and her husband, just minutes after crossing the land border into Pakistan for the first time to tour Sikh holy religious sites on the occasion of Guru Nanak's 550th birth anniversary. Photo: Devirupa Mitra

Lahore: English and Gurmukhi script posters greet visitors crossing into Pakistan at Wagah. They all have the same format – an iconic picture related to Guru Nanak, Sikh gurus or religious sites along with a photograph of the sponsors from the Pakistan Sikh Gurdwara Prabandhak Committee.

The only non-Sikh represented on a poster was the secretary of the Pakistan Evacuee Trust Property Board (ETPB), which administers property left behind by Hindus and Sikhs during Partition. Tariq Khan Wazir’s banner bagged the prime position at the entrance and exit of the immigration and customs building.

These banners are the often the first thing that the hordes of Sikh and Hindu devotees encounter when they enter Pakistan – after the tall Rangers, posters of Jinnah and the massive flagpole.

Sixty-nine-year-old Ranjit Kaur and her husband among those who walked past these banners, strung across walls and fences, on Friday afternoon. The setting was a far cry from her home for 33 years in the Los Angeles neighbourhood of West Hills, but it was a journey that she had been meticulously planning for over a year.

“This is my first time in Pakistan, and we plan to be here for a week,” said Kaur. She coincided her visit with the 550th birth anniversary of Guru Nanak and therefore, her first stop was his birthplace, Nankana Sahib. Her next stop will be Kartarpur – the place where Nanak lived for 18 years till his death.

She had not been completely confident that the two South Asian neighbours would get the corridor open after the ground-breaking ceremony a year ago. The booking through a tour operator, rather than waiting for the corridor to open, had a more confirmed rate of success, she felt.

“It is Babaji’s miracle,” she said about the corridor being ready despite high tensions between the countries. “Next year, maybe next to next. But yes, I want to walk from Dera Baba Nanak to Kartarpur Darbar Sahib. That will fulfil a dream for most of us,” she added. Banners welcoming Sikh pilgrims marking the way from the border crossing point to the immigrant and customs facilities in Wagah. Photo: Devirupa Mitra

The corridor will open formally with a 550-strong Indian delegation crossing over first on Saturday afternoon. It will include the former Vice-President Hamid Ansari, former Prime Minister Manmohan Singh and his wife Gursharan Kaur, Punjab chief minister Amarinder Singh and two Union ministers, Harsimrat Kaur Badal and Hardeep Puri. After they reach Kartarpur, they will likely take part in the main event to be addressed by Pakistan Prime Minister Imran Khan.

While the infrastructure on both sides of the border seems to be ready to cope with the large influx of pilgrims, India and Pakistan have also been shadowboxing in the final run-up, with an eye on the Sikh community.

Pakistan has projected the infrastructure development for Kartarpur corridor as a ‘selfless’ gift to the Sikh community, worldwide. This was also reiterated by the governor of Pakistan’s Punjab province, Chaudhary Mohammad Sarwar, to a group of Indian media at his palatial colonial-era residence on Friday evening. “We have no political motive. We only want to facilitate the Sikh community as we believe that minorities should get equal rights,” he said. “There are no deep-seated designs to fan some sort of movement on the Indian side,” added Pakistan’s foreign minister, Shah Mehmood Qureshi.

India is not convinced. In fact, New Delhi has been consistently sceptical ever since Pakistan army chief Qamar Javed Bajwa spoke to India’s Congress leader Navjot Singh Sidhu in August 2018. Indian security agencies have expressed fear that there may be an infiltration of Khalistani elements with the opening of the corridor.

While officials from both sides cooperated to get the infrastructure and logistics in place, the point-scoring instinct was transferred on to the issue of the $20 pilgrim fee.

From the start, India had asked Pakistan to waive off the pilgrim fee on grounds that it would not be affordable for poor pilgrims and goes “against the sentiments” of the Sikh community. 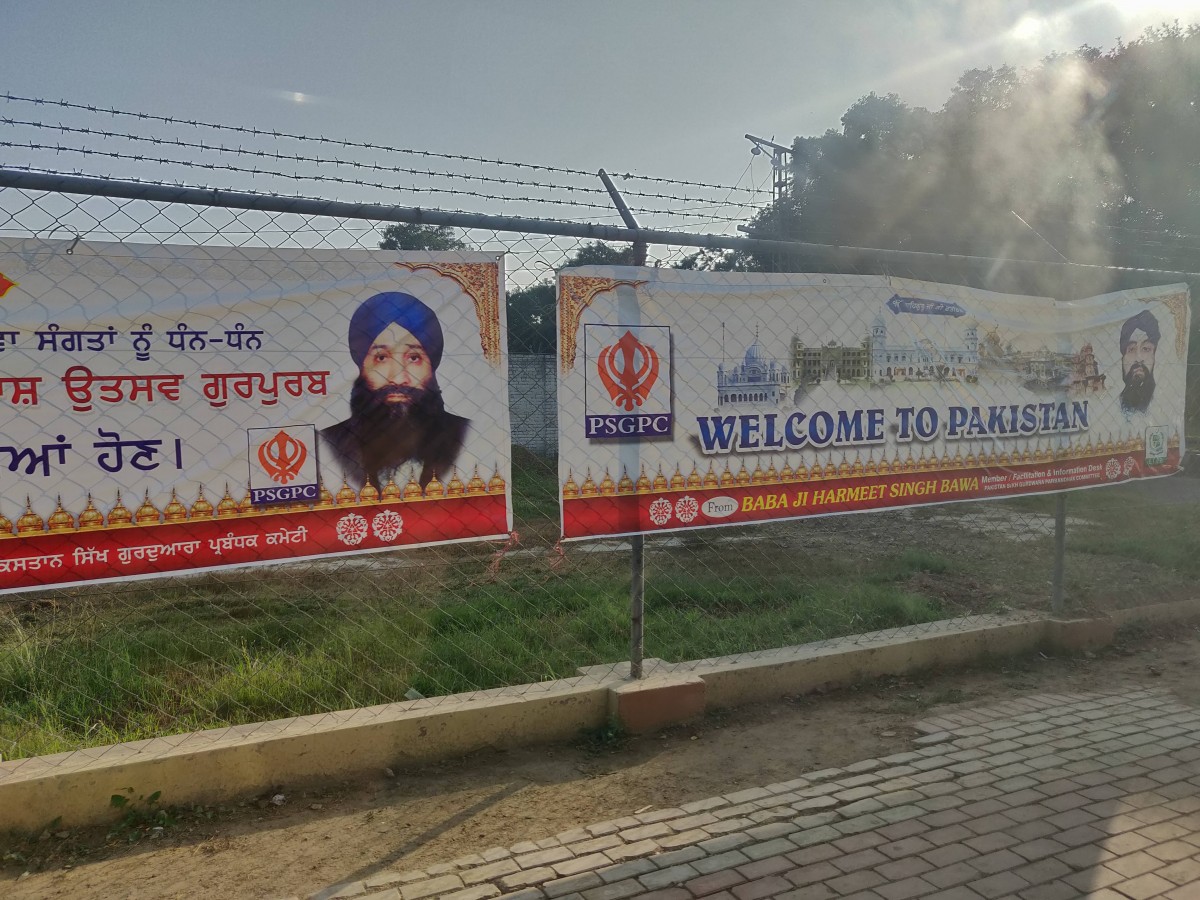 Banners welcoming Sikh pilgrims marking the way from the border crossing point to the immigrant and customs facilities in Wagah. Photo: Devirupa Mitra

Even on the eve of first jatha crossing the Kartarpur corridor, Indian and Pakistani foreign offices issued contradictory statements on Friday over the withdrawal of pilgrim fee on the first day, November 9, and the birth anniversary of November 12.

First, Indian government sources claimed on Friday that Pakistan has conveyed that the proposal for waiver of pilgrim fee on November 9 has been withdrawn.

Pakistani Prime Minister Imran Khan had tweeted earlier that as a special gesture, the provision for passport as identification proof and pilgrim fee on November 9 and 12 had been waived. This had led to indignant statements from Indian government sources that Pakistan was “creating confusion” and violating the bilateral agreement on modalities of the agreement.

A couple of hours later, Pakistani foreign office spokesperson retorted that India had “declined” the offer for removing the provision for 10 days advance registration for pilgrims. He also added that Pakistan will keep Khan’s “commitment” on the waiver of pilgrim fees on the two important dates.

PM Imran Khan had also announced waiver of service charges of US $ 20 on 9 and 12 November 2019. Abiding by the PM’s commitment, Pakistan will not receive any service charge from pilgrims on these two dates. #pakistankartarpurspirit

In the evening, Qureshi also told reporters that no pilgrim fee will be charged on Saturday. “But we cannot do anything about the passport, as it is part of the bilateral agreement.”

He also defended the pilgrim fee of $20 as “not being a huge amount”. “It is not for generating funds, but to maintain facilities properly.”

The Pakistan foreign minister also noted that the opening of the Kartarpur corridor should not be mistaken as an augury for broader India-Pakistan relations. “Kartarpur, unfortunately, means nothing (for rest of bilateral relations),” said Qureshi. “There cannot be bilateral engagement at this time.”

He claimed that Pakistan had kept the Kartarpur project isolated from the wider degradation in the India-Pakistan relationship. 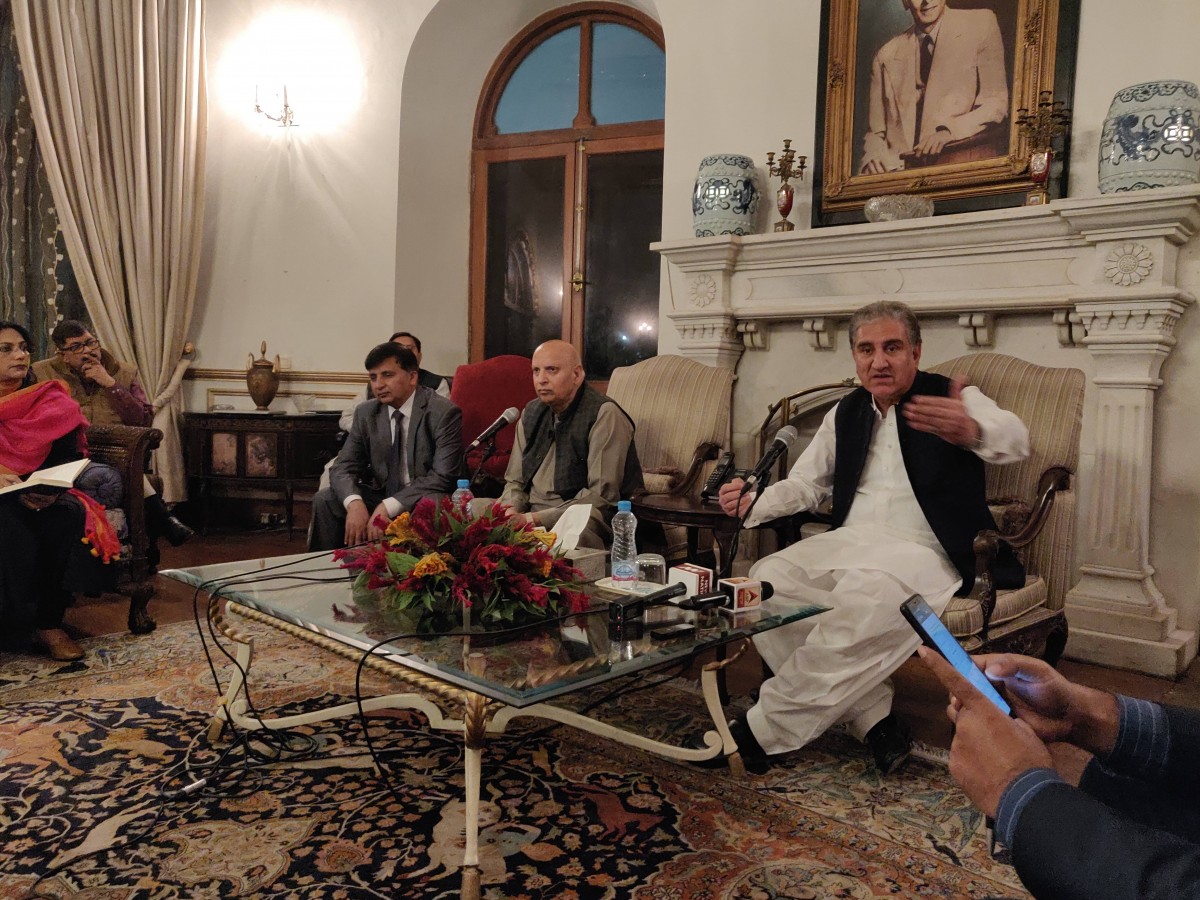 Pakistan downgraded diplomatic ties and snapped trade relations with India after Jammu and Kashmir’s constitutional autonomy was revoked by the Indian parliament on August 5.

Qureshi claimed that he did not want to dwell on the Kashmir issue as he wanted to be “positive” ahead of the inauguration of the Kartarpur project. Nevertheless, he spoke in some detail about Pakistan’s view about the happenings in Kashmir.

He asserted that “basic fundamental rights” were “non-existent” in Kashmir. Referring to the continuing political detentions, Qureshi said that there were no takers for the Indian government’s claims on human rights, not just outside, but also within the opposition parties who had not been allowed to visit Kashmir.

However, Qureshi dodged a question on whether India’s position that the changes in Article 370 are an internal affair is equivalent to Pakistan’s constitutional changes for Gilgit-Baltistan.

“The important thing here is that India has made a commitment to international community and to UN security council resolutions,” he said.

Qureshi said that India had used the Simla agreement to turn Kashmir into a bilateral issue, “which you have revoked through unilateral action of 5th of August”.

“I will not go into constitutional details,” he stated. “What Kashmiris are questions is the change of status. What we are questioning is the demographic change. Not just by the Muslims in the Valley, it is a concern to the Pandits in Jammu and the Buddhists in Kargil.”

About two hours after Qureshi’s remarks, it became clear that it was not just Kashmir that cast a shadow on the launch of Kartarpur project.

The announcement that the Indian Supreme Court will deliver its reserved verdict on the Ayodhya land dispute on Saturday meant that Kartarpur may not get the attention of the national media channels in India and will be pushed out of prime newspaper real estate. This fuelled a conspiracy theory that Pakistan’s effort to burnish its image has been deliberately targeted – with the main proponent being the army spokesperson through his personal Twitter account.