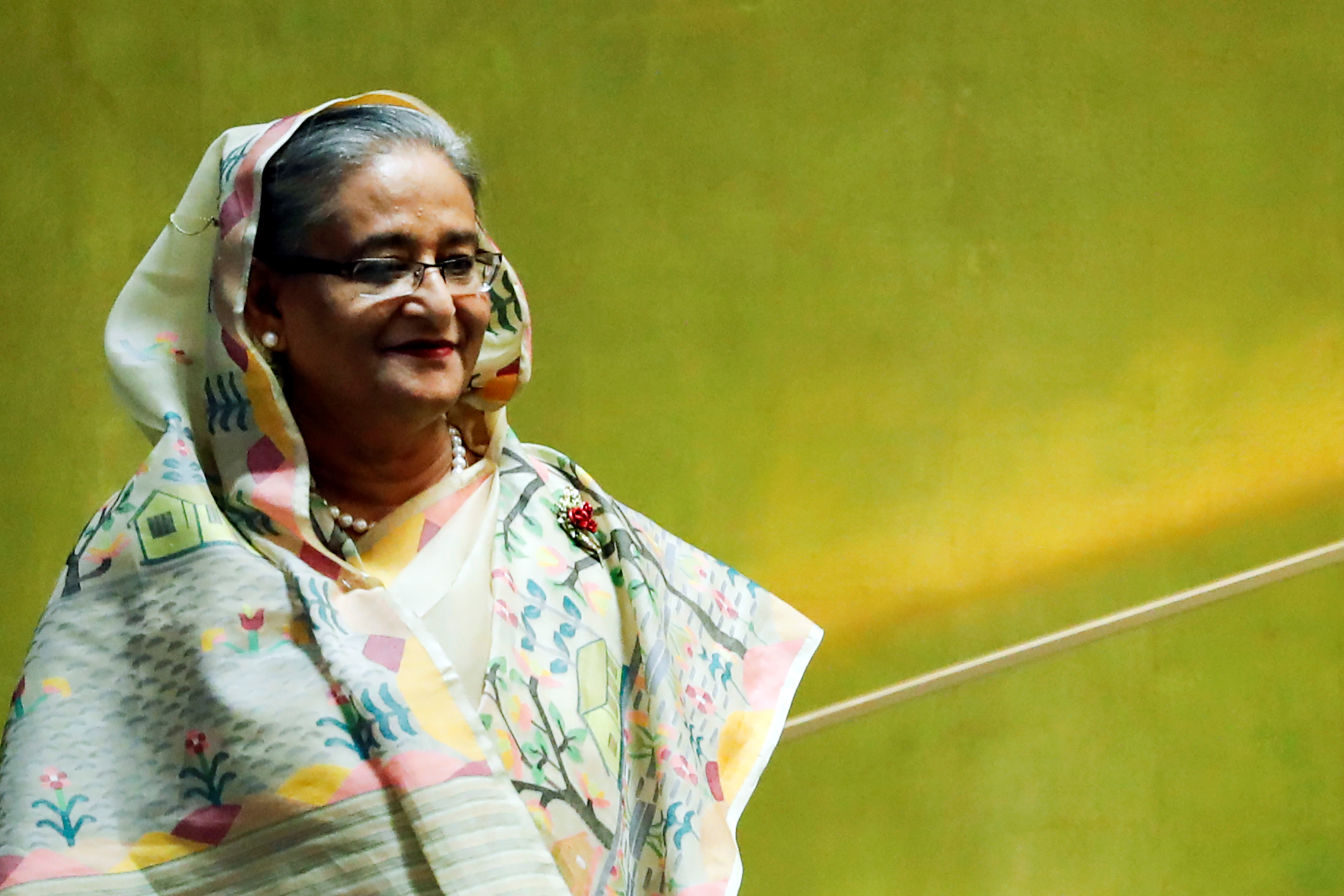 Before his death, Ekramul Haque had three brief phone conversations with his daughter. He made the first call from his phone. His daughter – keen to know when her abbu would return home – made the second and third calls from her mother Ayesha Begum’s smartphone, which has an app that records all incoming and outgoing calls. There was a fourth recorded call made by Ayesha Begum herself, trying to reach her husband.

Copies of these four recordings were given to journalists by Ayesha Begum, at a press conference in Cox’s Bazar on May 31, three days after Haque – an elected local government official in the Teknaf subdistrict in southern Bangladesh – was killed in a staged “gunfight.”

Some time after this, Haque was executed by a unit of the Rapid Action Battalion (RAB), Bangladesh’s feared elite police death squad. Ambient audio of this execution was also recorded in Ayesha Begum’s phone. It is not clear how this final (fourth) call was received on Haque’s phone — what is clear is that Haque could not have answered it himself. 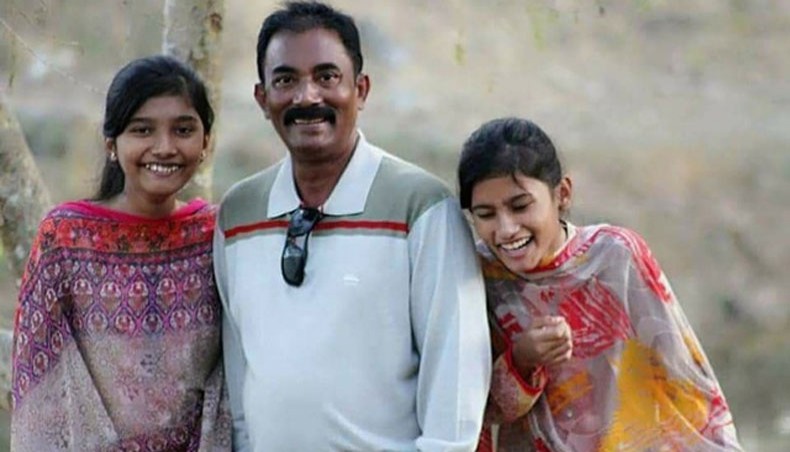 Tahiyat Haque and Nahiyan Haque with their father Akramul Haque, thrice-elected ward councillor of Teknaf Municipality and a local leader of ruling Awami League, shot dead in an alleged encounter with the Bangaldeshi security forces in May. Credit: Twitter

The fourth recording (missing its original metadata because of file conversion) is an aural nightmare, 12 minutes of very low-quality audio that documents a coldblooded murder – an unarmed man who apparently had his hands tied was shot dead point blank with a single bullet. One can hear how he cried out in pain for a second before death and then fell silent – one silence too loud.

There were police sirens and whistles. And, there were more gunshots. To make it look like an armed encounter, the killers (RAB members) kept shooting at the dead body from different angles (which presumably would be registered in a ballistic report and during postmortem). They then scattered some empty bullet shells on the crime scene and put some Yaba (methamphetamine) tablets into the dead man’s pockets. There were conversations about the basics of arranging the scene of a fake gunfight. This is how Bangladeshi security forces stage their version of “encounter killings,” like their Indian and Pakistani counterparts.

The murder of Haque was one of the 33 ‘encounters’ – or alleged extrajudicial executions – carried out by RAB units across Bangladesh between May 15 and June 1, as part of a “war against drugs” launched by Prime Minister Sheikh Hasina. 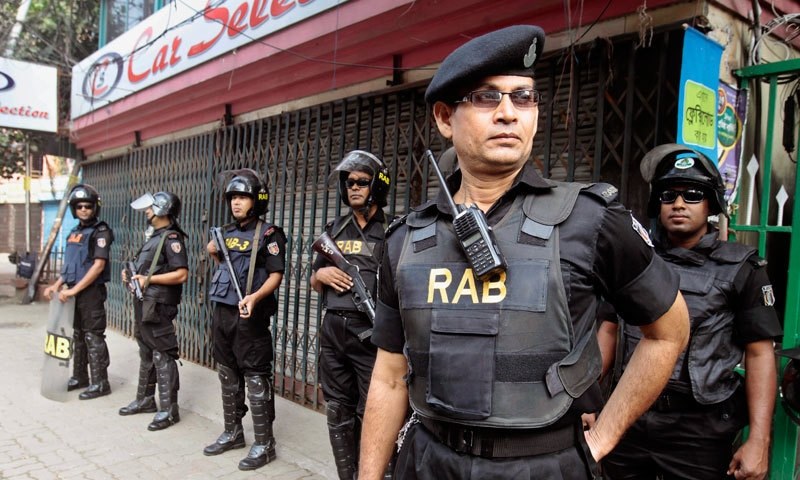 Bangladesh Police (responsible for more than a hundred executions) and Border Guards Bangladesh (BGB) are also taking part in this war, which is being coordinated behind the curtains by the Directorate General of Forces Intelligence (DGFI), the Bangladeshi military intelligence agency.

“[DGFI’s] IAB [Internal Affairs Bureau, also known as “the political wing”] is making the lists [of alleged drug lords] and RAB is taking out [the targets],” a Bangladesh Army colonel assigned to a Bangladeshi security agency told me via a secure chat app. To protect my source, I have agreed to a specific condition that I refer to him by his rank only.

The colonel also cited two public statements by Prime Minister Sheikh and home minister Asaduzzaman Khan Kamal that referred to a “special intelligence agency” and its leading role in Bangladesh’s war against drugs – both statements were widely reported in the Bangladeshi press.

That the IAB is in charge of making lists of alleged drug lords who would be targeted for extrajudicial execution was also confirmed by a civilian source associated with the DGFI. There is evidence that, in Teknaf, the murder of Haque was connected to a specific list prepared by the DGFI. I was given two-page scans of a classified document that describes Haque as a “top drug trader” and a “wholesale Yaba seller.”

None of these allegations were ever tried before a court of law, and Ayesha Begum strongly protests her husband’s innocence. Local journalists I have spoken to are also unaware of Haque’s position as a “top drug trader” in the region. As one journalist told me, “He lived hand to mouth with his family, in a single room house. That is not how [drug lords] live.”

The DGFI list of “drug lords” in Teknaf (along with four other lists: three from the Ministry of Home Affairs and one from the Department of Narcotics Control) was included in an attachment to an official “kill order” against Haque that was carried out by a special “operations team” of RAB 7.

Based on three independent sources and a classified mission report shared with me, I can reveal that the “operations team” was led by Squadron Leader Mohammad Rezaul Haque who is serving as a RAB commander on deputation from the Bangladesh Air Force (BAF). Based on publicly available information about previous RAB operations, I was also able to verify that Squadron Leader Haque indeed leads a RAB “operations team” in the Teknaf/Cox’s Bazar region. I could not, however, verify a claim that one of the voices in the fourth recording belongs to this RAB commander. 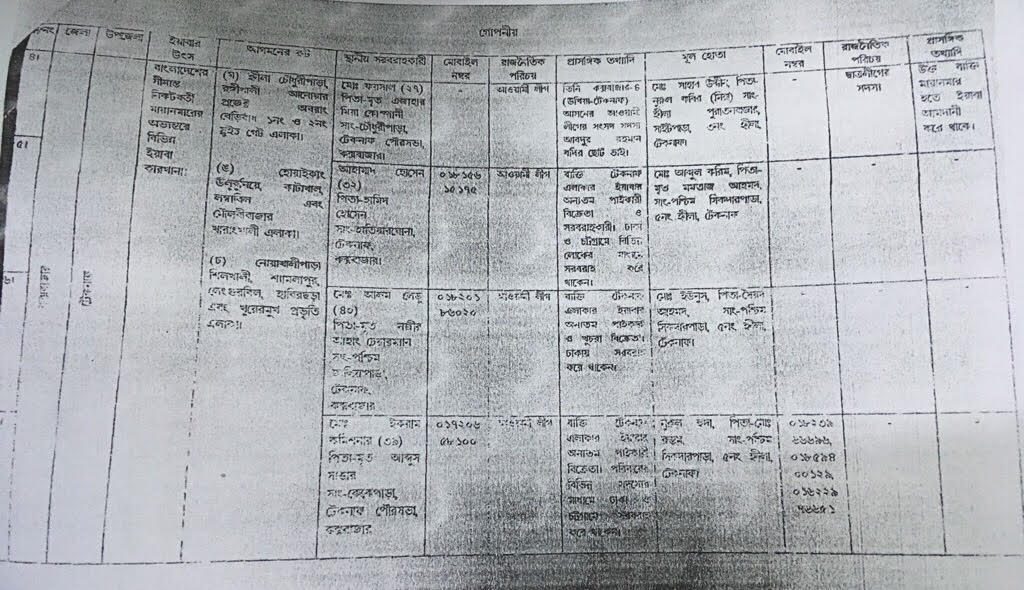 A classified DGFI list of alleged drug lords in Teknaf.

Another BAF officer implicated in this case is Squadron Leader Nazmus Sakib, who is in charge of the DGFI field office in Teknaf. He is accused of directly facilitating the murder of Haque. Despite a lack of publicly available information about Squadron Leader Sakib, his position at the agency was confirmed on record by Lieutenant Commander Amirul of DGFI’s Cox’s Bazar regional office.

One of my sources claimed that no commissioned officer of the Bangladesh Army took part in the killing of Haque, “Those two [squadron leaders] did it, no army [was part of it].” Squadron Leader is the air force rank equivalent to army major.

In the first of his last three conversations with his daughter, Haque can be heard saying that he was being summoned by a DGFI major: “DGFI’s major saheb called me in.”

When asked, Ayesha Begum confirmed that the “major” in question was “Major Sakib” of the local DGFI field office, who had been calling her husband the whole day on May 26 and prodding him to meet “a top major of RAB” who would be coming from Cox’s Bazar. According to Begum, Haque was reluctant to go out that evening as he was tired from Ramzan fasting – the DGFI officer coaxed him anyway to go out late at night.

“The DGFI major and the RAB major killed my husband together – he was an innocent man,” Begum told me over the phone. “I want justice.”

Justice will be a far cry though. It is highly unlikely that Squadron Leader Nazmus Sakib would face any scrutiny or sanction for his alleged role in the entrapment and murder of  Haque. DGFI personnel are outside the jurisdiction of civilian magistrates who are usually assigned to investigate cases of “gunfights” and “crossfires” (euphemisms for extrajudicial execution). Squadron Leader Mohammad Rezaul Haque is also unlikely to face any impartial and effective investigation for his role in the killing.

Both the squadron leaders, however, risk prosecution outside Bangladesh if another state, exercising universal jurisdiction, chooses to investigate their alleged crimes.

Moreover, they may be barred from participating in United Nations peacekeeping missions. Also, military officers who engage in human rights abuses face sanction by the US, as stipulated under the Leahy Law – BAF is a recipient of US military assistance, primarily in the form of training.

The US State Department has already issued a statement calling for “thorough and transparent investigations into all credible reports of extrajudicial killings [in Bangladesh].”

The UN High Commissioner for Human Rights has also “condemned the alleged extra-judicial killings of suspected drug offenders in Bangladesh and urged the authorities to ensure that these serious human rights violations are immediately halted and perpetrators brought to justice.”

How Hasina and her regime in Dhaka respond to these calls would determine the course of Bangladesh’s “drug war” in the coming weeks.

Tasneem Khalil is an independent Swedish-Bangladeshi journalist and the author of Jallad: Death Squads and State Terror in South Asia (Pluto Press, 2016). He tweets @tasneem.