In a wide-ranging interview to The Wire, Moeed Yusuf fielded questions on Pakistan's response to the end of Article 370, the fate of Kulbhushan Jadhav, delays in the Mumbai terror trial, Balochistan and other issues. 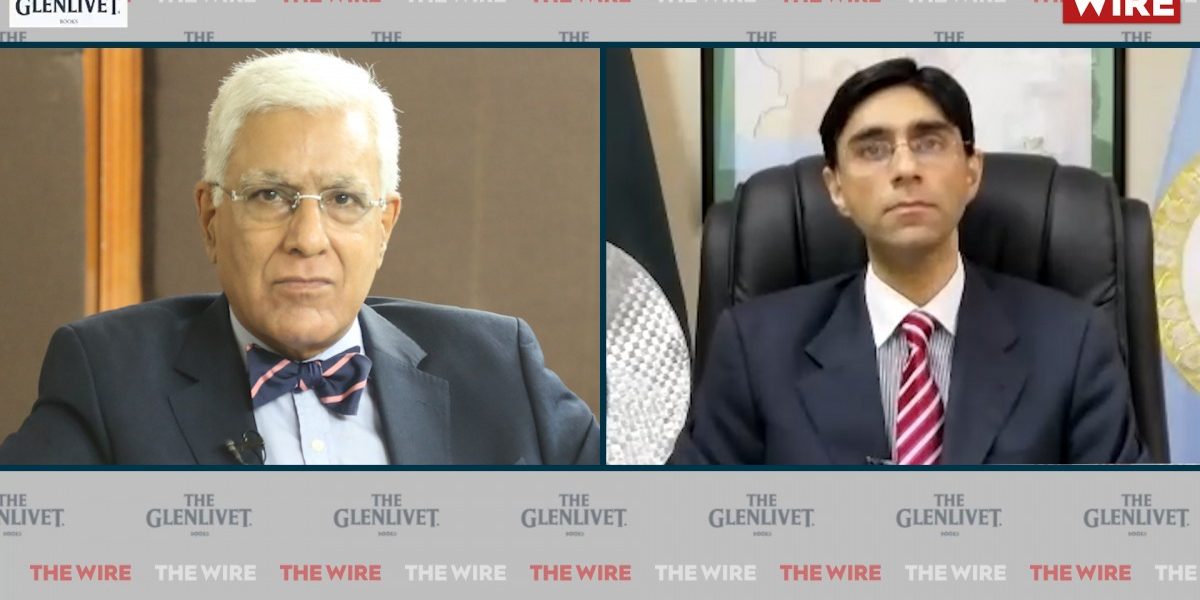 New Delhi: In the first interview to the Indian media by any Pakistani official after the constitutional changes in Jammu and Kashmir in August 2019, the advisor on national security and strategic policy planning to Prime Minister Imran Khan has revealed that India has sent a message expressing a desire for talks.

“We have got a message for a desire for conversation” said Moeed Yusuf, but refused to divulge further details. However, he insisted that Kashmiris must be a third party at these talks – a non-starter for the Indian side. He also made it clear that Pakistan is willing to discuss terror.

In a wide ranging, 75-minute interview to The Wire that was often quarrelsome and aggressive and even, at times, no holds barred, Yusuf told Karan Thapar “we must sit down like adults”. He said there are two issues, Kashmir and terror, and added “I want to talk about both”. He said Pakistan “stands for peace and we want to move forward”.

However, in the interview Yusuf repeatedly seemed to suggest that Kashmiris would have to be a third party in the talks and, second, that another two pre-conditions were that India must reverse what he called the “military siege” in Kashmir and roll back the new domicile law.

At one point in the interview, he seemed to take a swipe at Ajit Doval, India’s national security adviser, when he said, “Compare me to my counterpart in India” and added that his goal is to increase the political space for his prime minister i.e. Imran Khan.

In the interview, which will go up on The Wire’s website at 5.00 p.m. on Tuesday, a wide range of questions were raised and issues discussed. They include why Pakistan is so worked up about the recent constitutional changes in Jammu and Kashmir. Is this not contradicted by Islamabad’s intention to give full province status to Gilgit-Baltistan? How come Pakistan is demanding Article 370 be restored when earlier it considered it a sham and Pakistani high commissioners would not meet the chief minister of Jammu and Kashmir? How Pakistan’s focus on Article 370 has got little response from the world (except Malaysia and Turkey) but alienated Saudi Arabia and UAE. Prime Minister Imran Khan’s accusation of “genocide” and “a final solution” in Kashmir whilst remaining totally silent and even expressing ignorance about the plight of the Uighurs in China. 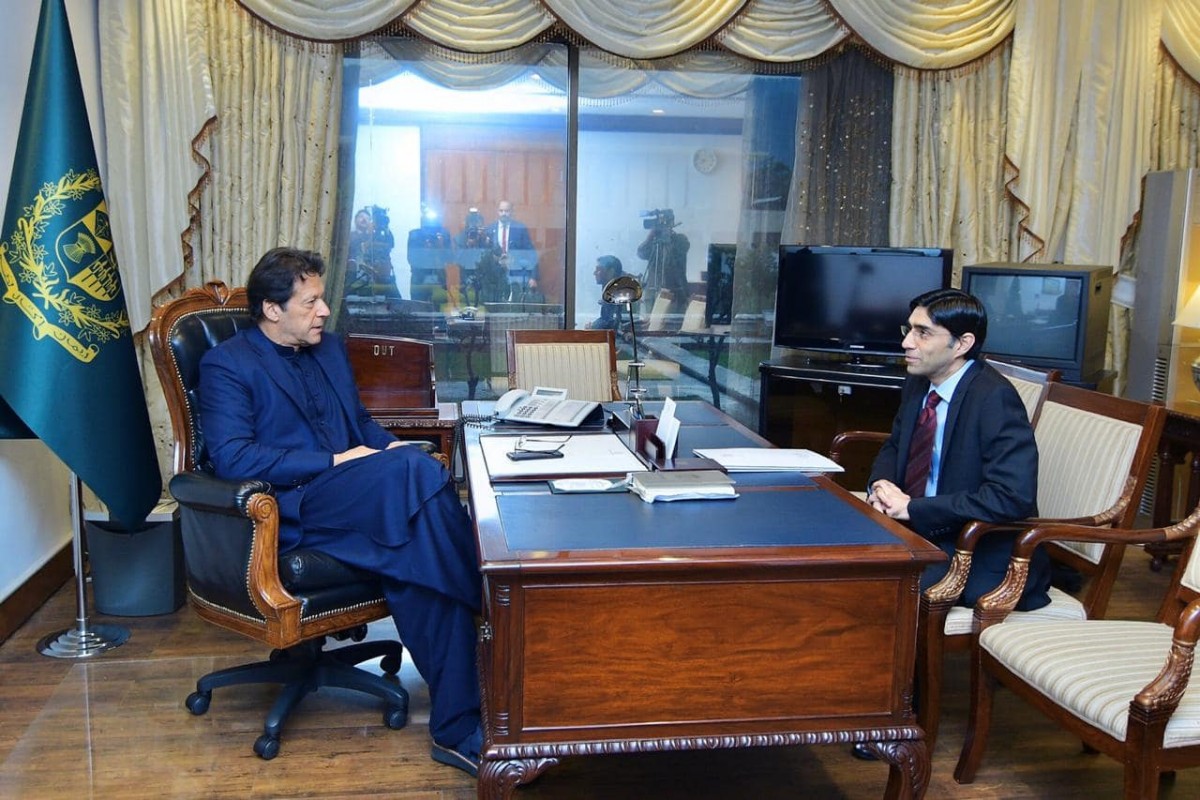 After the Kashmir issue, Karan Thapar questioned Moeed Yusuf about the former Indian naval officer, Kulbhushan Jadhav, on death row in Pakistan on espionage charges that India insists are false. Why is Pakistan refusing to give Indian diplomats unimpeded and unconditional consular access to Jadhav? Why is Pakistan refusing to give India all the documents pertaining to this case without which “an effective review and reconsideration”, as required by the International Court of Justice, cannot happen? And why is Pakistan refusing permission to appoint an Indian lawyer or a British QC when the Lahore High Court Bar Association has threatened action against any Pakistani lawyer who defends Jadhav?

Yusuf was also questioned about Pakistan’s repeated refusal to take action against terrorists who target India from Pakistani soil and, in particular, the failure to prosecute the seven accused in the 2008 Mumbai killings. These men are now out on bail and either untraceable or reportedly kept in ISI safe houses.

In response to these issues, Yusuf said “Kashmiris hate Indians”. He said the constitutional changes of August 2019 are “not an internal matter”. He said they were “a matter for the UN”.

Speaking about Prime Minister Imran Khan’s silence on the Uighurs while making accusations of genocide in Kashmir, he said this was “a false equivalence”. He said the Uighurs were a “non-issue”. He said that he had personally studied the matter in detail and was hundred percent satisfied that the Uighurs were being treated properly by the Chinese government and that there was no problem.

Speaking about Jadhav, Yusuf said India “has been caught with its pants down”. He says there is no law to allow an Indian lawyer to argue a case in a Pakistani court. He refused to accept that Pakistan has denied India unimpeded and unconditional consular access and repeatedly would not answer why a Pakistani official was always present at meetings with Jadhav and why Pakistan insisted on recording the meetings.

Speaking about the Mumbai 2008 terror attack and Pakistan’s failure to bring the accused to justice,  Yusuf squarely blamed India. He said India is “deliberately delaying sending evidence and witnesses” because it wants to keep the issue alive and use it to run down Pakistan in front of the world.

In the interview, Yusuf went out of his way to accuse India of inflicting terror on Pakistan. First, he claimed that in 2019 the Indian Embassy in Kabul had given $1 million to the Tehreek-e-Taliban Pakistan to help the TTP merge with four militant groups. Asked to be specific,  he named two of these groups but was unable to name the other two.

Yusuf also claimed that the handler of the 2014 terrorist attack on an army school in Peshawar was in touch with “an Indian consulate” (but he did not say which). He said Pakistan has the phone number of the handler’s contact. He added, “We have evidence to the T”.

Yusuf also accused the Indian Embassy in Afghanistan of using think-tanks as a front to funnel money to Baloch terrorists. He claimed the Balochistan National Army commander had been treated in a hospital in Delhi.