US court findings conflict directly with the basis of the criminal case that led to the arrest in Dhaka last Saturday of the prominent journalist Shafik Rehman. 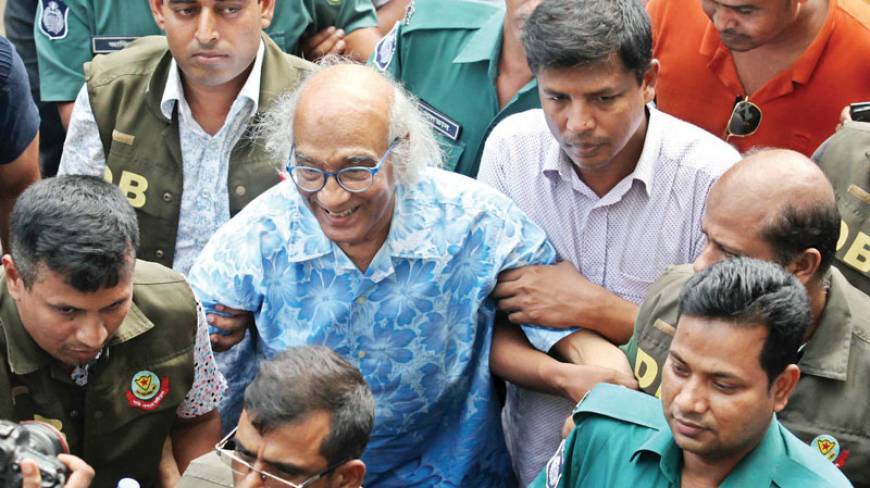 Dhaka: US court records contradict the Bangladesh government’s claims that the conviction a year ago of three men in New York for illegally obtaining confidential FBI records involved a plot to kill the son of Prime Minister Sheikh Hasina Wazed.

Indeed, the US district court judge who tried the case specifically dismissed prosecutors’ claims that the men planned to ‘physically harm’ Sajeeb Wazed Joy, the son of Sheikh Hasina.

The US court’s findings made during the sentencing in March 2015 of the three men who pleaded guilty to bribery offences, conflict directly with the basis of the criminal case that led to the arrest in Dhaka last Saturday of the prominent journalist Shafik Rehman for conspiring in the so-called plot to ‘kidnap and kill’ Wazed.

Rehman, who edits the magazine Mouchake Dhil and convenes the international affairs committee of the opposition Bangladesh Nationalist Party (BNP), was arrested on Saturday from his home after three police officers pretended to be reporters from a private television station.

Mahmadur Rahman, the former editor of the daily newspaper Amar Desh, who has been jailed since 2013 on various cases, was on Monday also ‘shown arrested’ in the same case.

The US court’s findings, published for the first time by The Wire also contradicts Wazed’s widely publicised claims that the three men convicted by the US court,  were jailed “for this plot” to kill him, and that the “evidence” behind the arrest of Rehman “comes directly from this [US] case.”

Wazed and the filing of a case in Bangladesh

The bribery case in the US first came to public attention in Bangladesh when Wazed published a Facebook post on March 9, 2013 stating that he had provided a victim statement before the New York Court sentenced Rizve Ahmed (aka Caesar), the son of the vice-president of the cultural wing of the Bangladesh Nationalist Party.

Wazed’s Facebook page is ‘liked’ by over 1.7 million people and his comments are widely covered in the media.

Ahmed, a US citizen of Bangladeshi origin, had pleaded guilty to two offences relating to bribing an FBI agent to obtain confidential financial and other records relating to the Bangladeshi prime minister’s son.

Wazed, without mentioning the nature of offences before the US court, stated that, “Caesar was promised US $40,000 per month and given the first payment of US $30,000 in cash directly from very senior BNP leaders in Bangladesh. I cannot disclose their names because the investigation is ongoing. The BNP had planned to kidnap me and kill me here in the US.”

Wazed’s Facebook post resulted in the police in May 2015 filing a General Diary entry, referring to the criminal conviction of the three men in the US as well as the allegation made by Wazed that the BNP has planned to kill him.

Three months later, the police filed a first information report with the court, which claimed that the father of Ahmed, along with other BNP leaders living in Bangladesh and abroad had conspired to “kidnap and kill Joy (Wazed) in America” and that Ahmed had already been jailed in the US “as part of this conspiracy.”

A few hours after Rehman was arrested on Saturday for his involvement in this criminal case, Wazed posted a further Facebook post. Sajeeb Wazed Joy claims the three men convicted by the US court were jailed for plotting to kill him and that evidence points to Shafik Rehman’s involvement in the plot. Credit: Facebook

It stated: “Today our Government arrested a senior “journalist” and opposition BNP leader Shafik Rehman for his involvement in a plot to kidnap and kill me in the US. A US BNP leader’s son, a former FBI agent and another American friend of both are already serving time in the US for this plot. …. The evidence against “journalist” Shafik Rehman comes directly from this case.”

And just for good measure, he tweeted much the same: Journalist #ShafikRehman arrested for BNP plot to kidnap and kill @sajeebwazed. Evidence from US DOJ case.

Later that day, in arguing that Shafiq should be remanded in custody, the police told the magistrate that the US court had jailed Ahmed for his involvement in a plot to kill the prime minister’s son and that the journalist had conspired with him in this endeavour.

The US bribery scheme

However publicly available US court documents tell a rather different story to the one narrated by Wazed and by the police.

The bribery scheme, which involved three men – Ahmed who gave the money, and FBI special agent Robert Lustyik and their mutual friend Johannes Thaler who took the money – started in September 2011.

In December, in exchange for $1000, Thaler gave Ahmed a number of confidential documents about Wazed, which Lustyik had illegally obtained from FBI databases.

Banks or financial institutions are required to file a SAR report when they identify any suspicious financial transactions. The court documents did not provide any further information about the reference to ‘$300 million’

After further discussions, Ahmed agreed in principle to pay the two other men a $40,000 retainer fee and $30,000 per month in exchange for additional information on Wazed. According to prosecutors, Ahmed represented himself to the men as someone who “was working with multiple associates who also sought the documents and information and were willing to pay for them.”

Ahmed was particularly interested in getting more information about the ‘$300 million’.  In one text, set out in the indictment, he wrote: “Just give me some idea what exactly you have on them … The last documents you gave me about $300 millions. How far that investigation went n what they found. Give me some idea and I will get u that contract!!!” (sic)

However, no contract was signed, and no new money changed hands.

After the three men were arrested, they all pleaded guilty to the commission of bribery offences. None of them were charged with any offence concerned with seeking to physically harm Wazed or anyone else.

In seeking to get a more severe sentence, the prosecution in its sentencing submission, claimed that Ahmed had admitted to them during an interview that one of his purposes in bribing the FBI agent to obtain information about Wazed was to “scare,” “kidnap,” and “hurt” him.

However, at the time of sentencing, the judge dismissed the prosecution claim that Ahmed had obtained the information with an intention to physically harm Wazed.

“The [US] government’s contention that [Rizve] Ahmed in fact sought to kidnap and physically harm an individual is a stretch,” Judge Vincent L. Briccetti said in March 2015 when he sentenced Ahmed to 44 months imprisonment for the bribery offences.

“I just don’t feel there’s enough evidence that’s been presented to me for me to make that finding,” the judge of the Southern District Court of New York said according to court transcripts. “[T]he statements [Ahmed] made about it were conflicting. At first he said he did, then he said he didn’t. I don’t know which is true.”

He added that in the exchanges between the three men, “There’s no talk … about doing physical harm to Individual 1. So I cannot find that that objective was part of the offense of conviction here.”

The judge also specifically ruled that Wazed was not a ‘victim’ in the case.

Judge Bricetti concluded that Ahmed’s sole reason for bribing the FBI agent was to embarrass Wazed for political gain. “This case is all about furthering Ahmed’s political aims, getting confidential information to expose what Ahmed apparently thought was corrupt behavior by the ruling party and otherwise embarrass [Sajeeb Wazed],” the judge stated.  According to court transcripts, Wazed was present in court when the judge made this ruling.

It should be noted that at no time did the US prosecutors ever claim in court that there was any intention to ‘kill’ the prime minister’s son, as has been widely reported in Bangladesh.

In its sentencing submission the government said that Ahmed had distributed the confidential information to three men, for which he earned $30,000. One of the men was ‘a Bangladeshi journalist’.

The police in Bangladesh are claiming that the editor Rehman is this journalist, and on Tuesday the police said that they had found some FBI documents at this house during a search.

The police are also suggesting that Rehman may have been one of the three ‘associates’ involved in the meeting in January 2012.

The US court records do not provide the identity of this journalist. However, the only claim made by the US prosecutors about the ‘journalist’ is that he or she received confidential FBI information from Ahmed. The prosecutors do not link the journalist to their claim – dismissed by the judge – that Ahmed planned to physically harm Wazed.

The prosecutors also do not claim that the meeting in January 2015 was about anything other than discussing the exchange of additional confidential law enforcement information.

In apparent response to widespread skepticism about the legitimacy of the arrest of Rahman, on Monday Wazed published a further Facebook post.

It read: “The US Department of Justice discovered Shafik Rehman’s direct involvement in the plot to kidnap and kill me. They provided this evidence to our Government. He was arrested based on this evidence. I cannot disclose more, but the evidence is direct and irrefutable.”

And he tweeted: ‘US DOJ discovered #ShafikRehman in plot to kill @sajeebwazed. Provided evidence’.

On being asked to comment on Wazed’s claim, Peter Carr from the US Department of Justice told TheWire, “We’ll decline to comment.”

David Bergman is an investigative  journalist based in Bangladesh. He also runs the Bangladesh Politico and Bangladesh War Crimes blogs.

Note: The three associates met in 2012 not 2015. The article has been edited to reflect this.