Satellite pride: Bangabandhu-1 took off from a launch pad in Florida, and Bangladeshi citizens exult at the successful launch of the nation's first satellite. Credit: Yale Global Online

Dhaka: Bangladesh joined the space age after a SpaceX rocket carrying a Bangabandhu-1 satellite streaked across Florida’s blue sky on May 11. The country, once disparaged by former secretary of state Henry Kissinger as a “basket case,” became the fourth South Asian nation with its own satellite meeting its communication needs. Named “friend of Bengal,” a moniker for the nation’s founding father Sheikh Mujibur Rahman, the satellite may open the door to a digital Bangladesh – if the government manages the challenges of sustainable technology development.

Bangabandhu offers the next stage of digitalisation for Bangladesh, similar to how cellphone towers and the Grameen Phone project, harbingers of globalisation, allowed the country to leapfrog a poor telecommunications infrastructure. The satellite launch – built by Franco-Italian Aerospace manufacturer Thales Alenia Space, launched by the US space firm owned by Elon Musk and placed in a geostationary orbital slot leased from Russia – marks another step in integrating the country’s economy with the globalised world.

The cost of Bangabandhu: $248 million – 1/190th of the country’s annual budget of $47 billion. Technological investment is a tough sell as a priority for Bangladesh, a democracy of 163 million predominantly rural people where average annual household income topped $600 in 2016. Most Bangladeshis are not well informed about the advantages or disadvantages of satellite technology and the investment fuels political divisions. The current government and its political allies tout the achievement, expressing pride in the nation’s progress, while the opposition is more critical, questioning how the investment will be recouped.

The satellite is the result of policymakers focusing on a project, taking necessary measures: increased connectivity and digitalisation of education with Bangladesh Open University providing an e-library and improved distance-learning programs. In turn, this activity increased market demand for technical and software development, reducing the unemployment rate. 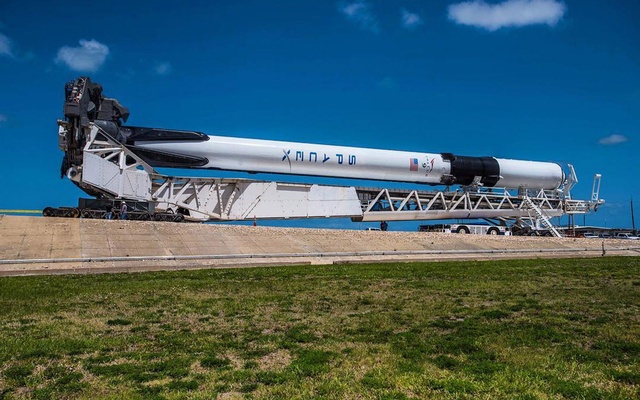 SpaceX’s first Falcon 9 Block 5 rocket rolls toward Launch Pad 39A at NASA’s Kennedy Space Center in Florida ahead of its planned May 10, 2018, liftoff. Credit: Elon Musk/Instagram

Upholding space cooperation is a must for Bangladesh. The government maintained relations with other space providers as Bangabandhu-1 covers about 40% of the globe’s land area and cannot provide service to Middle Eastern countries, where more than 3 million Bangladeshi migrants reside, without a proxy network.

The satellite presents three prospects for Bangladesh: expanding and developing telecommunications and internet services, reducing dependency on satellite services provided by other space powers while earning foreign revenues, and detecting as well as managing natural disasters and greater national security. With 80% of the Bangladeshi population living in rural areas, immense economic gains are anticipated from advanced communications with benefits dispersed among a range of sectors facilitating telemedicine, distance learning and online research, finance, agriculture, video conferencing and other communications and defence.

To distribute satellite services equally, the government is conducting a publicity campaign. The plan is for the satellite to integrate the central and local governments while merging peripheral rural communities with city-dwellers with expanded services like digitalised clinics, e-health cards, video communications with doctors both from home and abroad, tele-banking, e-payment systems and more.

Providing services to other states

Currently, Bangladesh annually spends more than $14 million on renting satellite bandwidth from foreign operators. Bangbandhu-1 is anticipated to save Bangladesh $210 million during its 15-year span while providing services to other Asian states such as Nepal, Myanmar, Bhutan, Indonesia, the Philippines, Turkmenistan, Kyrgyzstan and Tajikistan. Bangladesh could earn $1 billion by leasing out the transponders and another $1.5 billion by selling related services. The government has formed Bangladesh Communication Satellite Company Limited to operate and manage these activities. Half of the satellite’s 40 transponders will be dedicated to local television stations with the rest deployed to service channels from nearby countries. One challenge is that 26 of the transponders are Ku-band, adding to broadcast challenges. The internet frequency will also be costly – so the satellite’s frequency may not be fully utilised.

The new technology presents other challenges for Bangladesh both internal and external. The government borrowed US$205 million from HSBC Holdings for the satellite’s procurement and launch. Satellite capacity is usually sold before the launch. The Bangladeshi government expects to recoup the investment by selling satellite services at home and abroad within eight years – but specific details on public-private partnerships and market strategy have not been finalised.

Also, space sovereignty is still not a reality for the nation. The state tried to acquire its own orbital slot several times, but was denied entry and finally had to borrow a slot from Russia. Bangladesh remains hopeful of securing permission for establishing its own space sovereignty from the International Telecommunications Union.

This requires meeting global standards with improvements in technical capacity, cybersecurity and space training. For the program to achieve full potential, the government must promote technological standards in communications, policies and personnel, frame strategic policy and develop organisations specifically for the space age. The Bangladesh Space Research and Remote Sensing Organization, SPARRSO, has developed space and remote sensing technology for agriculture, forestry, fisheries, geology, cartography, water resources, land use, weather, geography, oceanography, science, education and other research areas. The centre also supports the government with development of space and remote-sensing technology from other countries and advises on national policy. But the centre is neither globally well-connected nor exclusively focused on space operations.

Such standards are a selling point for the neighbouring states targeted as markets for the satellite’s services. Most of these countries depend on China, India, Japan, Russia and US for cost-effective services and global networks with uninterrupted data flow and ever- increasing investment. Whereas Bangladesh has one satellite, India has 84, China has 244 and Pakistan has three. China provides a low-cost space service to neighbouring states with its Belt and Road Initiative and also develops space technology to expand global web connectivity. Competing with China, India has initiated the Cotton Route, with customer-friendly space services and a huge number of channels including Bollywood. China, India and other space powers target Bangladesh, the world’s eighth most populous nation, as a key player and market for their space governance.

Early and strategic decisions on balancing space operations between home and abroad and an agenda considering other space powers will shape Bangladesh’s program and are crucial for success. For example, in framing its satellite diplomacy, the government must consider that China is Bangladesh’s top trading partner in terms of value and India in terms of products, with US also a lead export destination. So, any decisions must balance accommodation for regional rivals or risk hampering the country’s socioeconomic development. This requires dual-track diplomacy that provides market- oriented, cost-effective and standard services to client states while balancing relations with other space powers to receive and provide uninterrupted data and telecommunication services.

The country’s entry into space required substantial investment, fortitude and collaboration. Space activities strengthen Bangladesh’s technological development and soft- power projection within the global space order. The country has experienced tremendous economic growth and technological development while managing many crises over the last decade. To sustain its space program, Bangladesh must establish space sovereignty, standard policies and a legal framework as well as balance partnerships with other space powers, prepare for competitive markets and train staff by establishing academic programs for space exploration. Perhaps most crucial is control of internal conflicts – managing the strategic challenges of the space program alongside economic development activities that benefit all Bangladeshis.

Abu Sufian Shamrat holds a MSS degree in political science from Dhaka University and is an independent researcher as well as a social activist based out of Bangladesh. He writes on political, social, global, as well as strategic issues in leading national and international dailies and journals including South Asia Journal, Eurasia Review, Modern Diplomacy, IndraStra Global, South Asia Monitor, Hindustan Time Syndication, Foreign Policy News and more.

This article was originally published by Yale Global Online.