Weapons, ammunition, alongside bags of crystal methamphetamine and meth-laced yaba pills seized by Myanmar police and military are seen in this undated photo near Loikan village in Shan State, between February and April 2020 in what the United Nations Office on Drugs and Crime described as Asia's biggest-ever drug bust. Photo: Myanmar Police/UNODC/Handout via Reuters

On January 22, 2020, a Rohingya man suspected to be a Yaba trader was killed during a gunfight with Border Guard Bangladesh in Bandarban, Chittagong. The 25-year-old Yaba peddler, who belonged to the Kutupalong Rohingya camp, was entering Bangladesh from a hilly area of Myanmar with a group of eight to ten people when he was apprehended by the BGB.

This was not a one-off incident – just the most recent one.

South and South-East Asia are struggling to cope with a surging drug epidemic, at the heart of which is a wildly popular methamphetamine drug known as Yaba, nicknamed ‘crazy pill’, ‘Nazi speed’ or ‘madness medicine’.

A synthetic stimulant ‘Yaba’ typically comes in the form of colourful, candy-like tablets. The main ingredient in producing Yaba is the chemical amphetamine, which is smuggled from China and Thailand to Myanmar, which hosts the largest number of clandestine Yaba laboratories.

A longstanding drug trade which continues to worsen

The United Nations Office on Drugs and Crime (UNDOC) has warned that growing demand for synthetic opioids in East Asia and Southeast is an indicator that the region will continue to grow as a source of synthetic drugs. Bangladesh is simultaneously a transit and destination country of the drug trafficking network.

Yaba has customarily entered Bangladesh from Myanmar via Teknaf. But for the past year or so, the trends have altered somewhat; in so far as the use of new routes, Rohingya refugees instead of locals as carriers, and replacing the usual brightly coloured Yaba pills with nondescript white pills to ensure a continuous inflow of the ‘crazy drug’ or as they are locally called, pepey (papaya).

In Bangladesh, each Yaba pill is sold for as less as Tk (Bangladeshi taka) 80-100 (approx. $1) in wholesale, and in retail for Tk 300-350 ($3.5-4). In Rohingya camps, they are available for as less as Tk 50 for a pill, “but you have to buy at least one box, containing around 10,000 pills, from the camps to get this rate,” according to one Yaba carrier. A massive surge in the Yaba trade pushed the Bangladesh government to passed the Narcotics Control Bill in Oct 2018 with a provision of death sentence or life-term imprisonment as punishment for drug-related crimes. An anti-narcotics crackdown followed which left nearly 519 people killed in gunfights, with over one lakh arrested for their alleged involvement with the narcotics trade, as of June 2020. Yet the inflow of the Yaba drug in Bangladesh continues.

Now, increased vigilance by Bangladeshi law enforcement authorities along the Teknaf, has led syndicates to adopt alternate routes. The bulk of the Yaba tablets are now entering Bangladesh through the Naikhyangchhari upazila of Bandarban district, while the rest come via the Indian border. 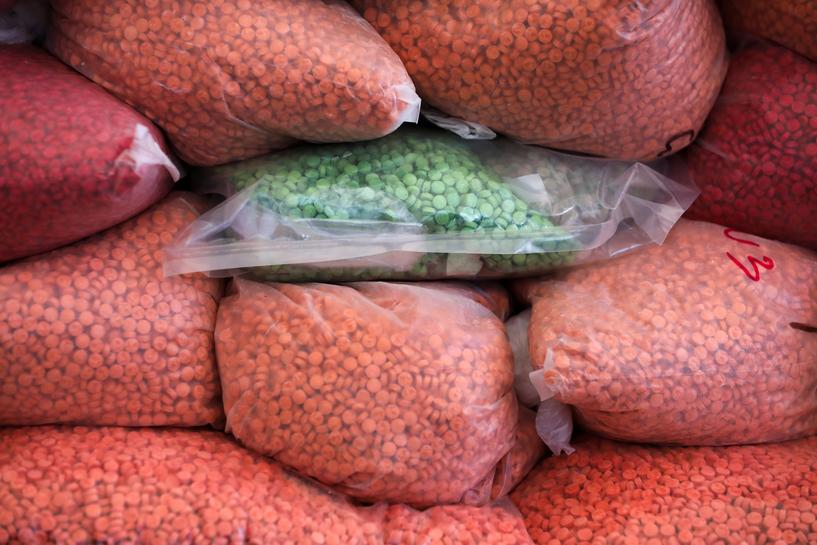 According to Md Hemayetul Islam, commanding officer of Armed Police Battalion (APBn-16), “There are thousands of small houses inside the Rohingya camps and all of them look the same. For this reason, it becomes quite difficult to recover or trace the pills unless anyone has specific information.”

A Rohingya household may get paid between Tk 20,000 to Tk 50,000, depending on the quantity of Yaba consignments kept for one night. In the Teknaf region, the Yaba drug warlords enjoy a reputation akin to Robin Hood’s, because they donate free food and financially support many families. This acts as a bulwark against police action in the area, where needy Rohingya refugee families reveal little about the Yaba smuggling, consignments to the law enforcement agencies.

Increasing use of the Indian route

Yaba is now coming in larger quantities from India, through the Kurigram District located in north Bangladesh. From the sea route, smugglers use the southern districts mostly Patuakhali to push the drugs in.

Along south western Bangladesh, the Fatehpur border point is another route the use of which has gained pace lately. The ‘cowboys of Fatehpur’, who reside near the zero point and smuggle Yaba along with cattle, also claim that the drug is being manufactured in Malda and Agartala in India. But the Bangladeshi Department of Narcotics Control is sceptical about rumours that Indian smugglers are producing Yaba pills. According to them, the peddlers call it “Indian Yaba” when it has come from India and with an Indian national.

Reining in the racket

The rate at which Yaba smuggling has increased even in the midst of a global COVID-19 pandemic is staggering. In May 2020, Myanmar police conducted ”record-breaking” seizures of liquid fentanyl and methamphetamine. The massive synthetic drug haul seizures in Shan state uncovered precursor ingredients from China, India, Thailand, and Vietnam, indicating the involvement of transnational crime syndicates.

Illicit Yaba drug trafficking is both a symptom of and a factor in, instability in the region. It undermines rule of law and can impact the prospects for peace and prosperity. It can threaten regional security because drug production and trafficking involve armed groups which may become powerful enough to take on the state through violent confrontation or simply through high-level corruption. Money gained through organised crime has been a mainstay of rebel financing for decades.

The problem in tackling the Yaba drug trade is that most efforts have been national, or, at best, bilateral. Unless regional institutional mechanisms are set in place, this transnational organised crime will continue to fester.

Vaishali Basu Sharma has worked as a consultant with the National Security Council Secretariat (NSCS) for several years, and is at present associated with the New Delhi-based think tank Policy Perspectives Foundation. She tweets at @basu_vaishali.