The new law to regulate broadcast media and news portals has come close on the heels of the much-criticised digital security law.

Dhaka: Bangladesh’s cabinet on Monday approved a law which would allow the government to send someone to jail for giving “misleading and false” information in a talk show.

According to cabinet secretary Mohammad Shafiul Alam, the draft of the Broadcast Law 2018 was approved in principle “to discipline” the broadcast media.

The law has made 24 types of works punishable, including airing false information, fabricated information regarding the Liberation War and rumours in broadcast and online media.

Anyone violating the law will be sentenced to a maximum of seven years’ imprisonment or fined up to Taka 5 crore or both. If anyone continues to broadcast or publish fabricated reports or information even after being disqualified by the court, he or she will be liable to pay Taka 1 lakh in fine per day.

The new broadcast law has come on the heels of the much-criticised digital security law which was put into effect on October 8 with the country’s president, Abdul Hamid signing the bill.

These laws, according to media activists, have squeezed down the space for exercising freedom of expression in the country.

Veteran journalist Afsan Chowdhury, who frequently participates in talk shows, told The Wire that there are certain parts and provisions of the law which “people like him” are not comfortable with.

He said the law talks about taking punitive measures against “false and misleading information” in talk shows – the “misleading” bit is what Chowdhury finds problematic.

“My question is, who will decide what is ‘misleading’? It is a very vague term and has the scope of being interpreted in many ways – sometimes to someone’s benefit, be it political or personal.” 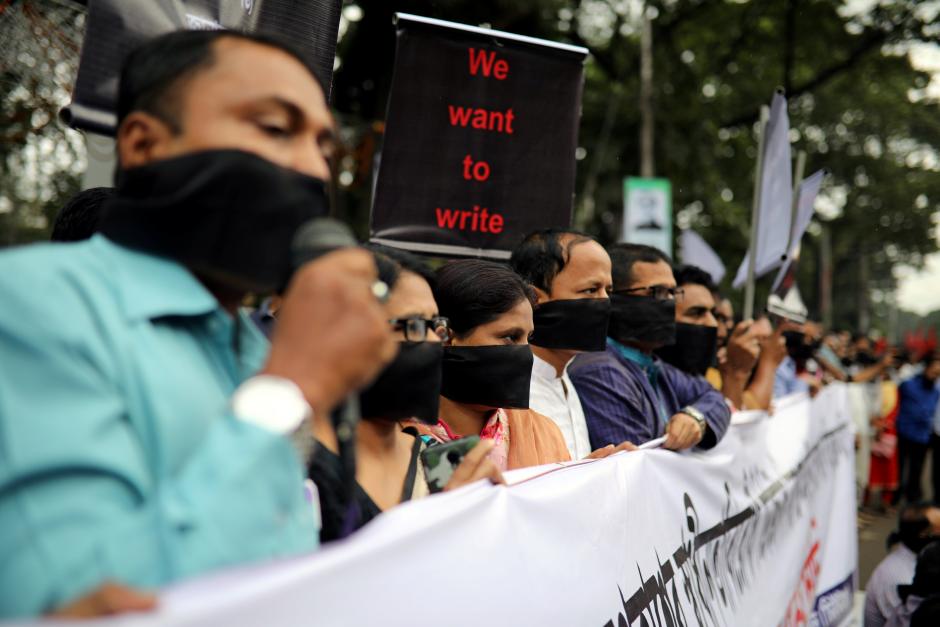 Journalists hold banners and placards as they protest against the newly passed Digital Security Act in front of the Press Club in Dhaka, Bangladesh, October 11, 2018. Credit: Reuters/Mohammad Ponir Hossain

“I am skeptical,” Chowdhury added, “Because there are a number of examples of abusing parts of laws for personal or political gain in Bangladesh.”

Giving the example of Section 57 of the Information and Communication Technology Act, Chowdhury said, many have abused that particular provision of the Act for their own gain.

“There should have been some sort of filtering in allowing someone to file a case. But unfortunately, in Bangladesh, I don’t see that practice in the judiciary,” he said.

A talk show participant who preferred to remain unnamed told The Wire that prime-time and late night talk shows play a large part in shaping mass opinions. “Such provisions of giving punishments for saying something in talk shows will create a chilling effect. People will exercise self-censorship.”

Journalist Khaled Mohiuddin, host of one of the most popular talk shows in Bangladesh, however, said people should not be given the freedom to “talk whatever they like” in talk shows.

“It’s live TV and there should be some sort of unwritten code while you speak. After hosting many shows, I can tell that at times the participants cross the limit of decency,” he said.

Days before the draft of the Broadcast Law was approved by the cabinet, Dr Zafrullah Chowdhury, an internationally-acclaimed doctor who founded Gonoshasthaya Kendra in Bangladesh, apologised to the country’s army chief General Aziz Ahmed for giving false information about him in a talk show.

Zafrullah, a close ally of the Bangladesh Nationalist Party, took part in a show on the night after a tribunal delivered the verdict in the August 21 grenade attack case last Wednesday.

There he claimed that General Aziz was “court-martialed after arms and ammunition had been stolen from Chattogram when the army chief was the general officer commanding there”.

A day after, the army headquarters issued a rejoinder, stating, “The untrue and irresponsible comment by a renowned person like Dr Zafrullah Chowdhury regarding a serving army chief appears to be completely motivated to belittle a state organisation like the army before the people.”

The army statement said, “No incident of theft or going missing took place in Chattogram during that period. It is especially mentionable that chief of army staff Aziz Ahmed did never face any court-martial during his long colourful army career.”

Later, a general diary was filed on Thursday against Dr Zafrullah for making “false, fabricated, motivated and treasonous” remarks against the army chief in a television talk show. Detective Branch of police was given the task of conducting an investigation into treason charges against him.

Meenakshi Ganguly, South Asia director of US-based Human Rights Watch told The Wire that any law depends on how the state chooses to enforce it.

“In Bangladesh, we have seen an overt attempt to curb free speech and dissent, prosecute people for criticism of the government or ruling Awami League leaders.”

She said that an active civil society plays a key role in protecting rights. “A government that wants to fulfil its responsibilities should welcome diverse opinions, not throw people in jail.”