Over a hundred students, demanding reduction in 30% reservation for children of freedom fighters, were injured in clashes with the police. 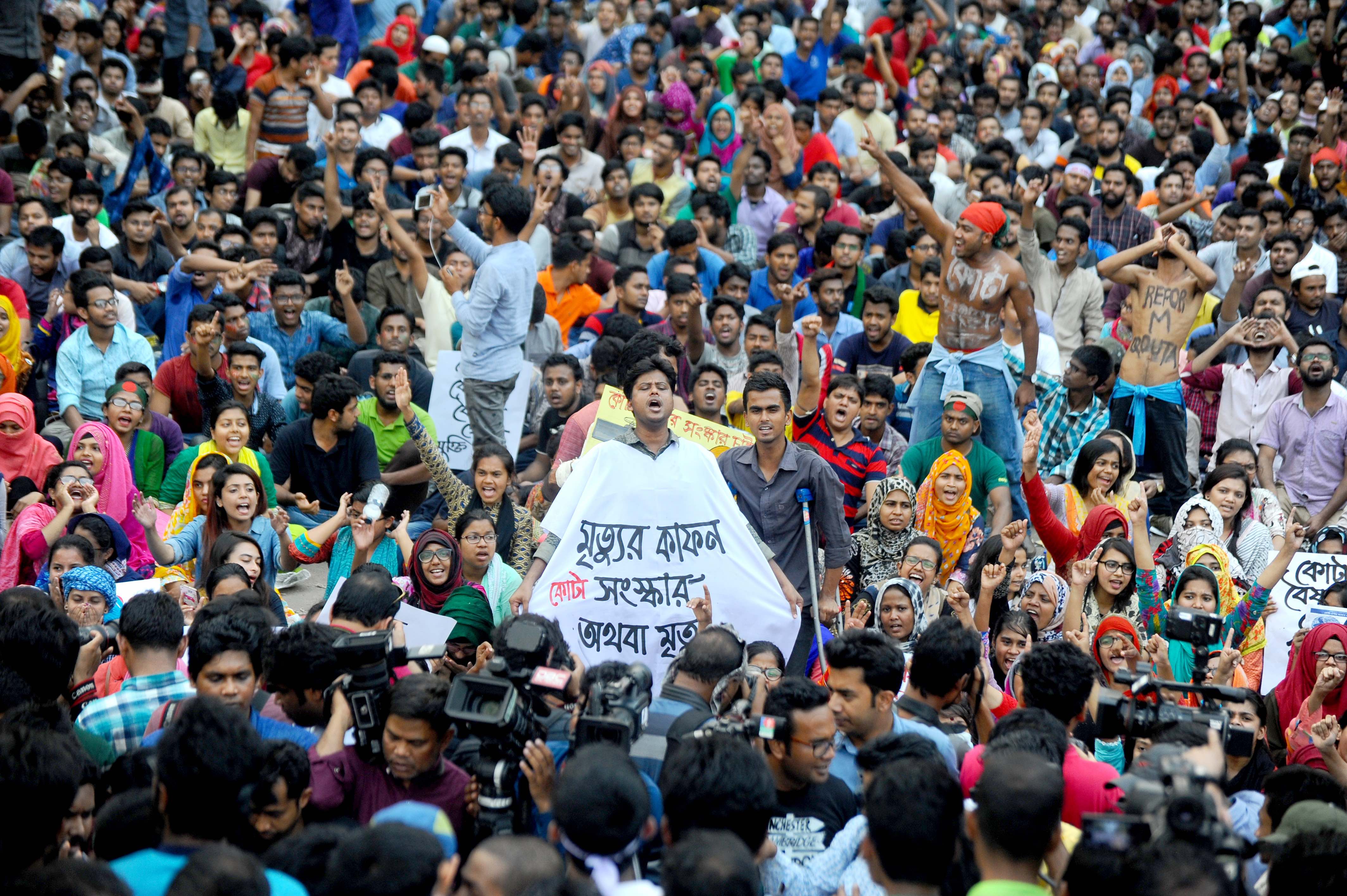 DHAKA: In the face of nation-wide protests by thousands of students, Bangladesh Prime Minister Sheikh Hasina on Wednesday announced abolishment of the decades-old quota system for recruiting government officials through an annual civil service exam.

Hasina declared in Parliament that “there is no need for quota system in the public service” asking the protesters to “Go back home”  as the “quota system will be scrapped as the students do not want it”.

The protesting students, meanwhile, postponed their agitation “for now” and said they would scrutinise Hasina’s announcement of “abolishing the quota completely.”

At present, 56% posts in the annual civil service examination are reserved under various quotas. Among those, the largest chunk—30%—is reserved for children of freedom fighters, which the protestors are opposing as they believe it destroys the level playing field in exams.

In 2010, the government in a circular had said if able candidates were not found under the freedom fighters’ quota, the posts would lie vacant.

According to data of the Bangladesh Public Service Commissions (BPSC) – which conducts the Bangladesh Civil Service (BCS) Exam—in the 31st and the 35th exam, the last completed civil service examination, out of 648 positions under the freedom fighters quota, 521 remained vacant.

This has been going on for decades. Ten years ago, in the 25th BCS exam, out of 709 positions reserved under the freedom fighters’ quota, 637 remained vacant.

In January this year, Syed Ashraful Islam, the public administration minister told the national Parliament that over 3.59 lakh government posts were lying vacant in different ministries and divisions. 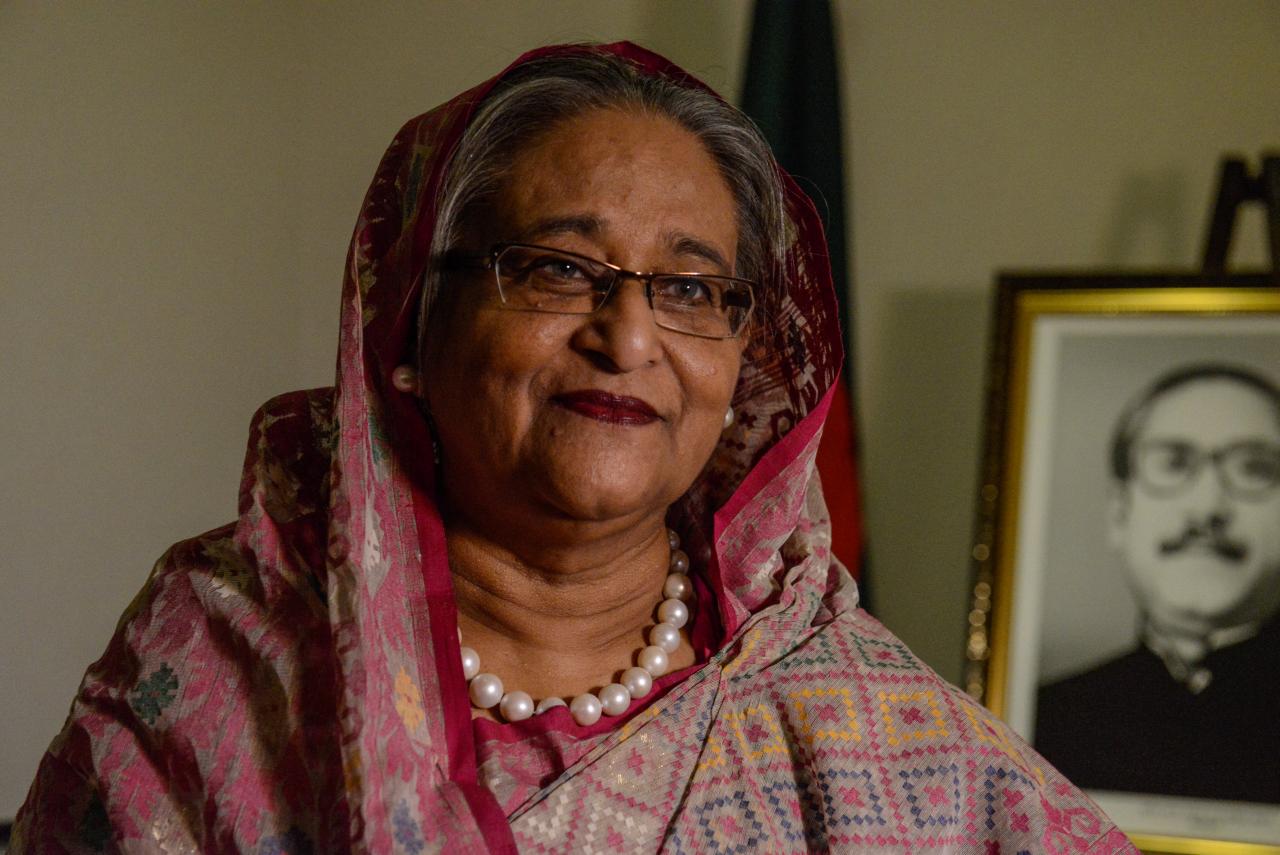 “We want a change in that. The government should give more emphasis to merit-based exams and reduce the reserved quota to under 10%,” said Sajedul Karim, a protest0r.

How the protest got bigger?

With a five-point demand, the joint students’ platform has been demonstrating since mid-February near Dhaka University and the Shahbagh area which in 2013 was in the limelight for protests against the verdict of the Bangladesh’s War Crime Tribunal.

The students’ demands include bringing down the reserved seats from 56% to 10%, filling vacant posts under quotas from the merit list, stopping special recruitment under  certain quotas, introducing a uniform age limit in government jobs and transfer of jobs under quotas to a different candidate only on the basis of merit.

Over the last one-and-a-half months, the protestors got more organised and conducted campaigns over social media. Last Sunday, they occupied the Shahbagh intersection,  the nerve centre of the capital, Dhaka, disrupting traffic in the city.

After the police action. the protests spread and things soon got out of control for the respective authorities.

“I saw photos and videos of the police attack on Sunday night and I have decided to join the protest as I believe it is taking place for the right cause,” Ataual Ehsan, a student of Jagannath University in the capital, told The Wire.

By noon on Monday, almost all the public universities across Bangladesh had expressed their solidarity with the protestors. Students at state-run universities in Chittagong, Khulna, Rajshahi, Barisal, Rangpur, Sylhet and Savar boycotted classes and took out processions.

As sporadic clashes between students and law enforcers were reported throughout Monday, the government sent its senior minister and secretary general of the ruling Awami League, Obaidul Quader, to talk to the agitating students.

On Monday evening, Quader, while talking to the students, said, “The government is not rigid on this. We will positively consider the rationale of your demands.” He also promised them “reasonable reforms” by the first week of May.

The student delegation, led by Hasan Al Mamun, joint convener of the group, conveyed this development to his fellow agitators after which they announced postponement of the protests until May 8, when the government would let them know about its decision on quota reform.

Meanwhile, remarks made by two senior Awami League leaders and two senior ministers re-ignited the fire and brought the students out on the streets again on Tuesday.

Matia Chowdhury, the incumbent minister of agriculture, in an unscheduled discussion in Parliament on Monday, said “Will the children and successors of those who risked their lives to fight for independence not get an opportunity? Will the children of Razakars get the chance? Will the quota for the freedom fighters be shrunk for them?” 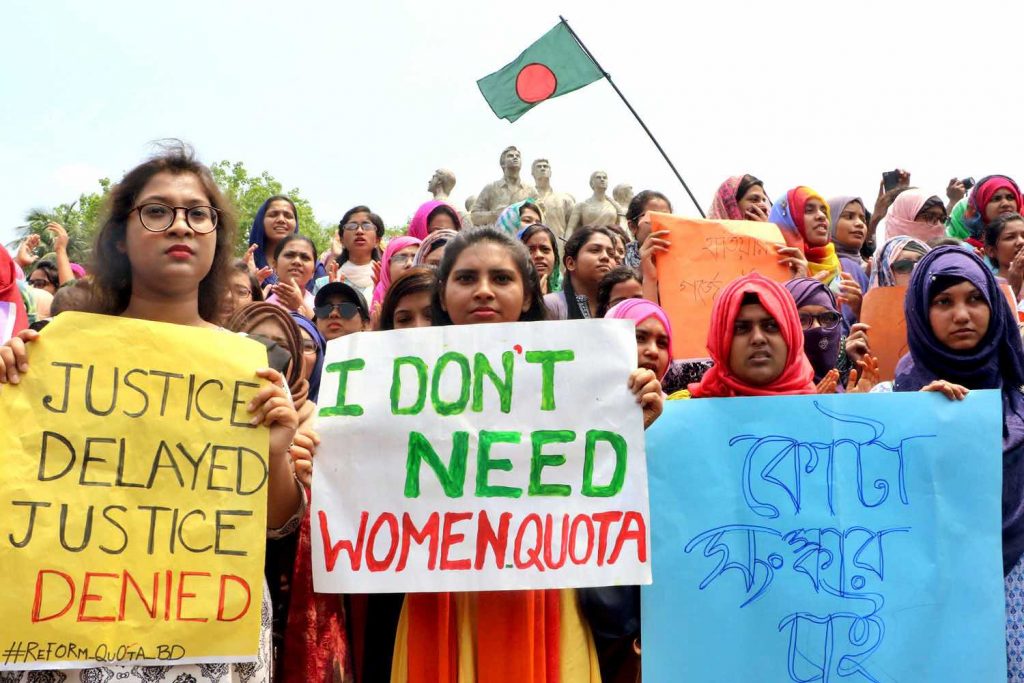 The protestors claim that freedom fighters’ quota in exams and all other government recruitment tests had resulted in many forms of corruption. Credit: Nabiullah Nabi

Chowdhury supposedly used the term Razakar— a force of volunteers who collaborated with Pakistani occupation forces during the War of Independence—as the protestors specifically targeted 30% quota in government jobs for children and grandchildren of freedom fighters.

The protestors reacted strongly to the minister’s remark. Adnan Rajib, a Dhaka University student, told The Wire that they came back on the streets to fight for what they think “is a right cause.”

“Calling us Razakar is insensitive and nothing short of foul talk. We strongly protest such an offensive remark,” he said.

The protestors said the freedom fighters’ quota in BCS and all other government recruitment tests had resulted in many forms of corruption.

Since Bangladesh’s Liberation War in 1971, the freedom fighter list has been changed six times by subsequent governments. The process of listing freedom fighters is not transparent enough, thus it has become “questionable”, he said.

There were instances when freedom fighter certificates of high government officials were proven to be false after investigations.

Rashed Khan, a joint convener of the protestors group, objected to Chowdhury’s remark and said, “Matia Chowdhury should issue a written apology for making such a remark.”

Meanwhile, finance minister A.M.A Muhit told reporters on Tuesday that the government would re-examine the quota system of public service recruitment after the national budget in June.

This remark, too, re-kindled the protest as it contradicted the government’s Monday’s promise of a decision on “quota reform within a month.”

Nurul Haque, another joint convener of the group, said the finance minister’s remark reflected “a false promise made earlier.” “We will not leave the streets unless our demand is met,” he added.

Is the quota system bad?

The quota system in Bangladesh’s civil service was introduced in 1972 after independence on December 16, 1971.

On September 5, 1972, the ministry of cabinet affairs issued an interim recruitment policy through an order. As per the policy, 20% positions were to be filled by merit, 30% by freedom fighters, 10% for war-affected women and 40% for district quotas.

In 1986, there was another reform wherein the merit quota was increased to 45%, 30% for freedom fighters, the quota for war-affected women was abolished, 10 per cent quota for women remained and 5% for ethnic communities.

In 1997, the quota system was expanded– offsprings of freedom fighters were included, and it was mentioned that if suitable candidates were not found, the posts designated for them would be kept vacant.

Kamal Uddin Ahmed, former professor of political science, Dhaka University, said, “The biggest flaw in the quota system is that the merit quota (44% only) has been knowingly ignored to provide 56% quota for others, making the system irrational, unsound, flawed, and non-transparent.”

Ahmed told The Wire that intense politicisation of the Public Service Commission during the past three decades had “corrupted, tarnished and distorted” the recruitment process.

“The chairman and most of the members were individually honest, but they had to surrender to the pressure/telephone calls from the governing leaders of the country. Thus, the quota system was misused, and equality, justice, fairness and transparency could not be maintained,” he said.

Former cabinet secretary Akbar Ali Khan told The Wire that it’s not rational to have a quota system for an indefinite period. “If we don’t reform the old quota-based system and give more priority to merit-based cadre, then we will have a brain drain in the civil service,” he said.

Faisal Mahmud is a journalist from Bangladesh