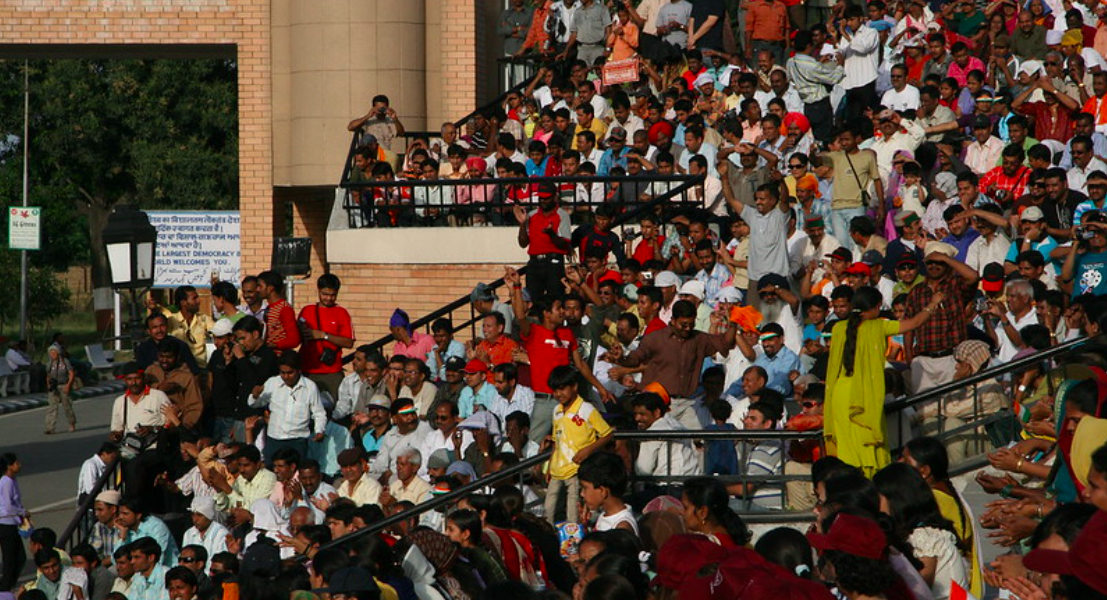 Differentials in Hindu-Muslim population growth is a much debated subject in India.

In particular, the differentials in Hindu-Muslim total fertility rate (i.e. average number of children per woman) has led to political debates.

Although several scholarly works have attempted to demystify myths around Hindu-Muslim population growth differentials, but the half-truths continue to spread.

It will be worthwhile for readers to look at how many children a Hindu or Muslim woman desire to have rather than the average number of children a woman has. This is because an individual’s preferences to have children have more significant implications for future policy and planning for promoting optimum or sustainable population size.

A country suffers from both too high and too low population sizes.

Hindu-Muslim convergence in the number of children per women

The latest evidence from National Family Health Survey (2019-21) effectively puts an end to the long-debated ‘differential in Hindu-Muslims fertility rates.’

The NFHS-5 report reveals that the difference between Hindu (1.94 children per woman) and Muslim (2.36 children per woman) fertility is only 0.42 children per woman. Muslim women were estimated to have an average of 1.1 more children than Hindu women in 1992, and the gap had shortened to 0.42 by 2021. However, the story is different when we look at the trend rather than point estimates. In the last 20 years, Hindu fertility has dropped by 30% against 35% in Muslims (Figure 1).

During the same period, the rate of decline in population growth in Muslims is greater than that in Hindus. This suggests that the trends in Hindu-Muslim fertility rates are on track to absolute convergence, possibly by 2030. 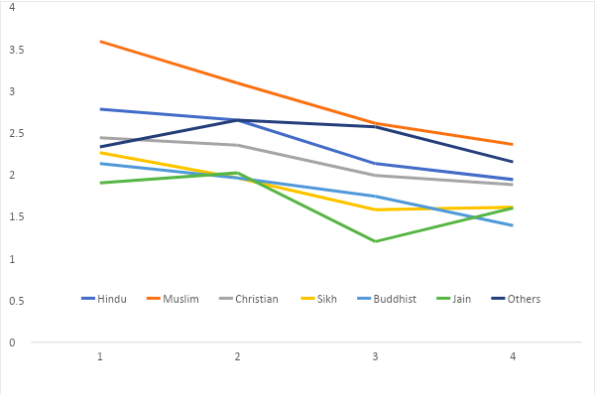 Hindus and Muslims want the same number of, and fewer, children

The difference in these two indicators suggests the existence of unwanted or unintended births among women. Unwanted and unintended births are a situation where women do not desire to go for additional births; still, the absence of access to family planning services and contraceptive failures leads to unsolicited births.

In Figure 2, we can observe that the wanted number of births per woman across the religious groups is way below the replacement level of fertility. 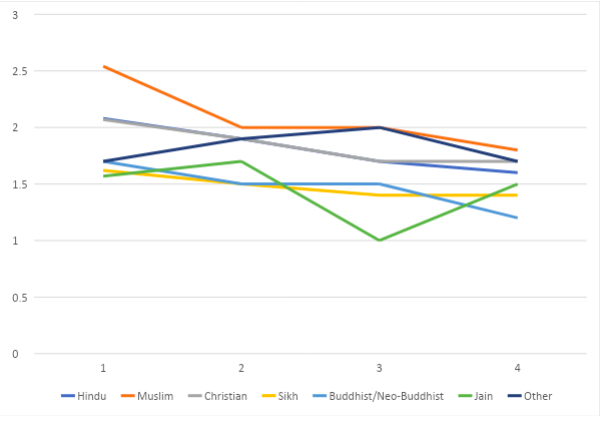 Currently, across the religions in India, women do not want more than one or two children, and such cases are slightly more among Muslims than Hindus.

Unwanted births happen when women’s desire to have a specific number of children is not honoured.

Because unwanted births are unplanned and often mistimed, they can be understood to add to a woman’s desired number of children. Women find it difficult to adhere to their ideal number of children because of lack of access to family planning services, and also due to failure of contraceptives and lack of decision-making power within the household.

Thus, it is sensible to say that lack of access to quality family planning services is the major reason for unwanted or unintended births across religions. 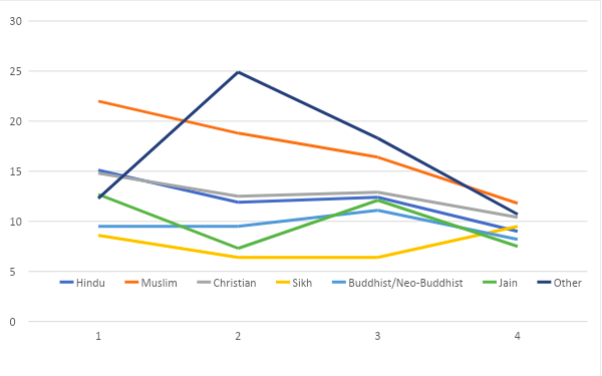 Today Hindus and Muslims want not only the same but also fewer children. In the contemporary scenario, there is a lack of convincing evidence to prove that the religious norm independently determines the fertility levels of population growth.

For instance, Muslim women in Jammu and Kashmir and Kerala have fewer births than Hindu women in Uttar Pradesh and Bihar.

Thus, the population policies need to give more attention to meeting the unmet need for family planning and means to ensure child survival for population stabilisation, especially in demographically laggard states. Women’s education and employment status are also key distal factors that significantly influence childbearing in a population.

The latest United Population Prospects (2022) reported that more and more countries have begun to experience population decline. Declining birth rates around the globe are causing a serious panic among the political class and policymakers. A shrinking population can be the next biggest threat to geopolitics and sustainable development. Thus, no country in the world welcomes the low or lowest-low fertility rates of the human species. Currently, around 114 out of 197 countries around the globe either want to raise or maintain their population growth.

Hence, considering the declining fertility levels across the socio-religious groups, India must move away from state-induced targeted population control programmes and focus on the health and wellbeing of its populations, ensuring population stabilisation.

Srinivas Goli is Associate Professor at the Department of Fertility and Social Demography of the International Institute for Population Sciences (IIPS).