Women Are At the Centre of DUSU Elections This Year

How committed to women's issues are the parties contesting in Delhi University? 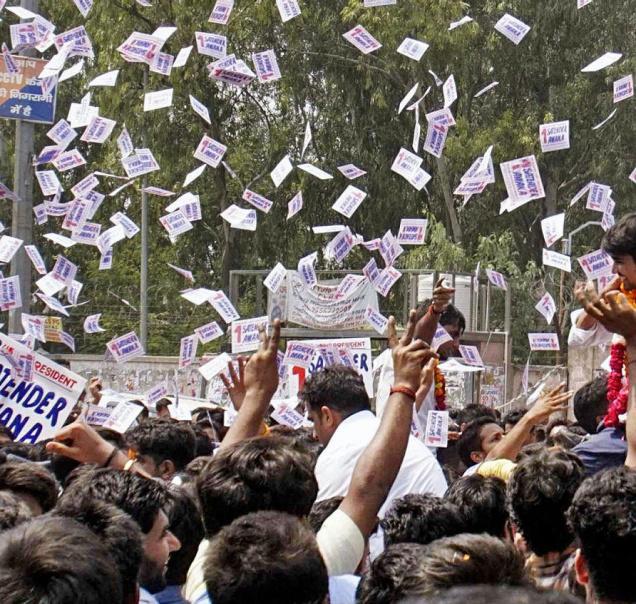 New Delhi: Delhi University is all set for its students’ union polls this year, with the walls of North Campus plastered with posters, and the streets littered with pamphlets. With elections for the Delhi University Students Union (DUSU) on September 9, the focus this year has been women’s issues. Across party lines, a plethora of promises has been made. The most important issue featuring on the manifestos of all three of the leading parties – ABVP, NSUI and AISA – is accommodation, especially for women. The emphasis on women comes after DU witnessed a spontaneous women’s’ movement that eventually organised itself under the name Pinjra Tod, in the course of the past couple of years.

In a first in DU, AISA’s panel for this year consists of three women: Kawalpreet Kaur for president, Amrita Nirmal for vice president and Ankita Queen for joint secretary. NSUI and ABVP have just the one female candidate on the central panel: Vinita Dhaka from NSUI for secretary and Priyanka Chhawri from ABVP as vice president. Speaking to The Wire, Kawalpreet finds it strange that she is persistently being asked about the fact that there are three women on the AISA panel.

“Nobody asks these questions about men on the panel. I think we have people on our panel, who are capable leaders, and it will help more women in DU engage in politics. Especially since there are so many women’s colleges in DU, which do not directly engage in the election, I think there is a tendency to alienate women from politics in DU.”

With regard to AISA’s manifesto, she said that the main emphasis was the issue of accommodation. Elaborating on the issue, she said that AISA has been running a campaign called ‘Room of My Own’, which had even placed three concrete demands with the vice chancellor. They did not receive an adequate response, however, and generally, the administration has been stubborn in instituting changes with regard to the issue of accommodation.

In addition, they would like to introduce special buses for women and ensure that DU students have metro passes and similar infrastructural changes that ought to make the everyday lives of students easier.

Other than that, AISA’s agenda pushes for a gender sensitisation committee that covers all of DU, and is not restricted to specific colleges. Furthermore, they want this committee to have representatives from students. The objective is to make the atmosphere on campus more women-friendly, insists Kawalpreet.

She said that AISA has supported the extremely popular Pinjra Tod movement in the past and that she endorses the movement’s demands. Surveillance via CCTVs and protectionism that seek to keep women under control are not the way to make the campus safer, she argued.

NSUI too, has been talking about women’s safety. In fact, its manifesto this year, titled ‘Priyadarshini’ aims to specifically promote women’s safety on campus. The Wire spoke to Nikhil Yadav, NSUI’s presidential candidate, who said that the party has focused on women’s issues because for the past two years, women’s safety has been a major issue in the Delhi NCR region. Among the promises that the manifesto makes, is the installation of CCTVs and placing female constables at bus stops and outside evening colleges. When asked about his opinion on Pinjra Tod, he said that he does not support the restrictions placed on women by hostels. Sameera Mehta, who is currently pursuing an MPhil in English literature, was not convinced by NSUI’s manifesto, and said that it leaves her sceptical about the entire enterprise.

“Womens’ rights mentions are almost always through the expected platitudes of “women’s safety,” she explained. “The NSUI, having released an exclusive women’s manifesto, seemed heartening but after having read it, I feel that they haven’t managed the leap from theory to a practical understanding of the issues. Surveillance and safety seem to go hand in hand for [them].”

The ABVP manifesto for this year has also been pitched around women’s safety and talks about measures such as getting police control room vans to patrol areas around women’s hostels. They are also advocating fair treatment of the various communities that make up DU’s student body, especially students from the North East.

Saket Bahuguna, a spokesperson for the ABVP, said that women’s safety has been an issue on the ABVP’s manifesto for some time now.

“The problem of not giving respect to women is a long-term one,” he said, “and the only way to solve it is by raising awareness. India is a country where women have always been respected, as mothers, sisters, daughters, friends, teachers and in whatever capacity they may hold.”

When asked by The Wire about ABVP’s participation in women’s movements in the city and on campus, especially Pinjra Tod, Bahuguna said that Pinjra Tod has a “one point agenda run by people influenced by communist thought.” He accused  Pinjra Tod of propagating lies about the ABVP, an organisation, he said, goes back to 1949 and is present in all parts of India, “…from Kashmir to Kanyakumari, Imphal to Kutch, including the Andaman Islands.” Besides, he added,, “We do not need certification from Pinjra Tod, especially when they failed to comment about the Anmol Ratan case.”

Ratan, an AISA leader from Jawaharlal Nehru University, was recently arrested for allegedly raping a student on the JNU campus. AISA has expelled him but the ABVP has cited his case both in DUSU and the JNU Students Union election to attack all leftist candidates.

Asked what ABVP thought about several questionable comments BJP leaders had made about women – including, most recently, Union culture minister Mahesh Sharma’s comment about women wearing skirts in India – Bahuguna said, “Making a comment and actually doing something are two different things. The BJP gives representation to women. We have so many qualified ministers who are women, such as Sushma Swaraj and Smriti Irani. Do the communist parties have women in their politburos?”

Urvi Sirkek, a third-year undergraduate student at DU said that the ABVP’s manifesto was hypocritical with its rhetoric of women’s safety, even though they have in the past threatened women from Pinjra Tod.

“There is no space for dialogue [with the ABVP],” she said.