What Rotis on a Railway Track Will Tell a Future Historian

A Brief History of Special Trains, as a PhD student may record, in 2120. 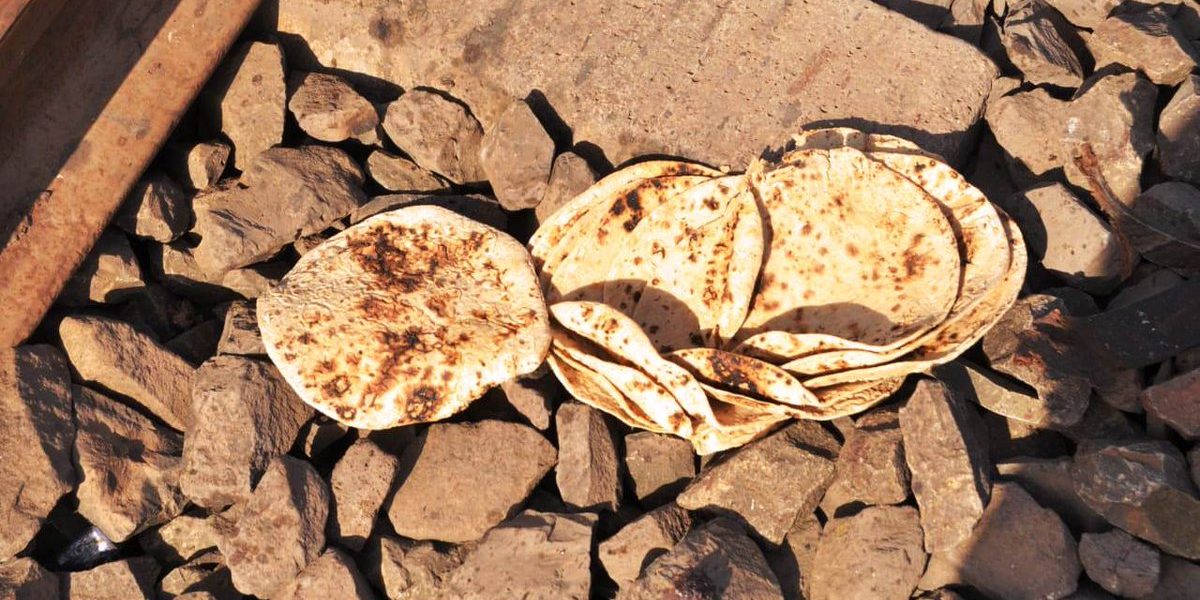 These rotis, which a group of migrant workers had packed for their long journey home, were found on the railway track after 16 of them were killed by a goods train near Bhopal on May 8, 2020. Photo: Twitter

The year is 2120. A historian is writing her PhD thesis on ‘special trains’ of the past.

From the rut ways of ancient Greece in the 1st millennia BCE, to James Watt’s steam engine (1774), to bullet trains approaching 500 km/hour; from transporting a few kilos of coal for a few metres to more than 4 trillion passenger-kilometres travelled and 10,000 billion freight tonne-kilometres transported all over the planet, railways history is nothing if not fascinating. And if you include ‘special trains’, it is possible to glean from them great insights into human society and psychology.

Our historian will find that in some countries, the most important special trains were those that took people to holy pilgrimage destinations and temples; for instance, the Buddhist train, the Ramayana Express and Sri Ramayana Yatra. She would be pleasantly surprised how religious, and by extension, moral, we must have been.

But she will also find evidence of avarice and aggression as she learns about special trains carrying treasure. She will document the Kakori train of the Indian independence struggle – the money of Indians being transported to the British treasury, liberated by Ram Prasad Bismil, Ashfaqullah Khan and their comrades from the Hindustan Republican Association.

She will be amused to find the Nazi gold train from World War II, supposedly buried in some tunnel in Poland, but which may not exist. And that thousands of Kashmiris in 2019 made the return journey from the valley to Banihal by train just to be able to access the internet and enjoy rights they were told they now had but which may not exist.

Her early impressions of the religiosity of humans will suffer a setback as she reads about prisoners of war being transported by special trains, like the Chiricahua Apaches in the late 19th century. She will find awful details of their journey with locked doors and windows, rail coaches full of stench. It will be impossible for her to imagine what they went through.

She might anticipate improvement in the 20th century until she finds stories about the Nazi concentration camps like Auschwitz-Birkenau, in which prisoners were brought by special trains from across Europe to meet a horrific end. In fact, Hitler’s expansive railway network played a large role in the Nazi conquest of country after country.

Our historian will be amused to note that Hitler had a personal luxury train-cum-headquarters, with marching-ahead soldiers and decoy trains serving as security measures, and that he named it ‘Amerika’ after the slaughter of Native Americans.

She would learn that luxury trains became common after Hitler – exorbitantly expensive special trains that few could afford. And that there is a website proclaiming, “…… private rail cars give you one thing above all: the luxury of time alone with the people who matter the most.”

On the other extreme, she would find evidence of so-called “cancer trains”, transporting cancer patients from one city to another. And she would find special trains from Pandemic 2020, used for transporting, by that time it will be known, 1 million or 10 million migrant labourers to their native places.

The historian will wonder what caused them to migrate in the first place, hundreds, thousands of kilometres away, leaving their families behind. She will learn about their working and living conditions, wondering why they could not stay back for a month or two for the duration of what was obviously meant to be a temporary lockdown.

She will be curious to know what kind of a socio-political order first brought millions of people from small towns and villages to its big cities, then abandoned them when they were the most vulnerable, what were those companies who could not provide them shelter, food and a basic income while there was no work. Tears will fill her eyes as she reads about the 16 workers killed in their sleep by a train on the tracks they were following to reach home.

She will document how one of the world’s largest rail networks – that has the capacity to move 23 million passengers in a single day – was left idle by India’s rulers for 50 days as millions of poor workers were forced to walk home. And that when the government relented and allowed the migrants and their families to travel by train, so much red tape and confusion were created that the public health gains from 50 days of social distancing were extinguished in a few hours of chaotic crowding.

How could society tolerate this, she will ask. It would be quite similar to the feeling we get when discussing slavery. In fact, she would be able to make comparisons with greater hindsight. Human society at the time of slavery was not that advanced – technically, socially, economically, morally.  There were people and priests, politicians and Supreme Court judges who justified slavery as an established world order. On the other hand, human society in the 21st century is not only better developed in all spheres but is the  wealthiest and technically the most advanced it has ever been in human history. Yet, it thinks nothing about treating a large section of the population as sub-human. It still has priests, politicians and judges who are prepared to justify suffering on such a massive scale. Indians during the Emergency were told to ignore the violation of democratic rights because ‘the trains run on time’. In 2020, they were told to see great virtue in the fact that trains are not running at all.

Our future historian of special trains will record all of this and more. Her archival research notes will be full of the absence of passenger manifests and reservation charts. And she will wonder if there is a museum somewhere in India which has preserved fragments of the dry rotis the missing passengers of the missing special train never got to eat.

If someone like me were her PhD supervisor, they would advise her to end with words from Frank Snowden, epidemiologist and medical historian: “Epidemic diseases are not random events that afflict societies capriciously and without warning. On the contrary, every society produces its own specific vulnerabilities. To study them is to understand that society’s structure, its standard of living, and its political priorities.”

Samir Malhotra is a doctor at the Postgraduate Institute of Medical Education and Research [PGIMER], Chandigarh City