This Year, the Durga Puja Returned to Its Core Group – Those Who Can't Celebrate It

Even though it is by far the happiest point of the Bengali calendar, the Durga Puja has always been as much about celebrating as it has been about not celebrating. 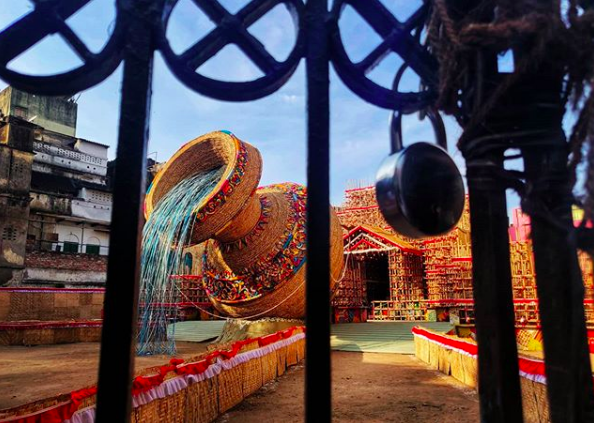 Locked gates keep the pandal at Kashi Bose Lane in Kolkata out of bounds for visitors. Photo: Chandrani Datta

Kolkata: It is not as if the Durga Puja was ever entirely bright.

Anyone who has spent the duration of the pujo season in Kolkata knows that at the heart of the celebrations, there is a heavy ounce of sadness –  of sorrow, or mourning or even an unscientific strangeness in one’s mind.

Even though it is by far the happiest moment in the Bengali calendar, Durga Puja is as much about celebrating as it has been about not celebrating. Every ritual, every swell in the clouds that heralds this time and even the depth of the songs of the Mahalaya is a reminder that there is much that has passed, that will not come again and that the only paradise is a paradise lost. In the coming and leaving of a goddess, there is an implicit understanding among all revellers that the sound of the dhak may be a merry one, but it is not merry for every one.

If you have visited any pandal, you have seen the ecosystem of inequality around it. The bigger the puja, the more the stalls of fast food sellers, and the deeper the furrows in their brows over business done and undone. In the cheap watered down cold drinks sold in glasses, in the vomit that trickles down the ferris wheel at Park Circus,  in the children who are begging at your elbow for the soggy bhelpuri being sold and the unending distance between the parking area and the pandal, there is a wretchedness. This is the delight.

That foreshadowing of doom that repeat watchers of that great Bengali institution, Pather Panchali, have come to associate with kash flowers is the very essence of the sorrow in the Durga Puja. Apu and Durga at once bring in puja and run to their sorry ends. This is the demon in the eudaimonia. 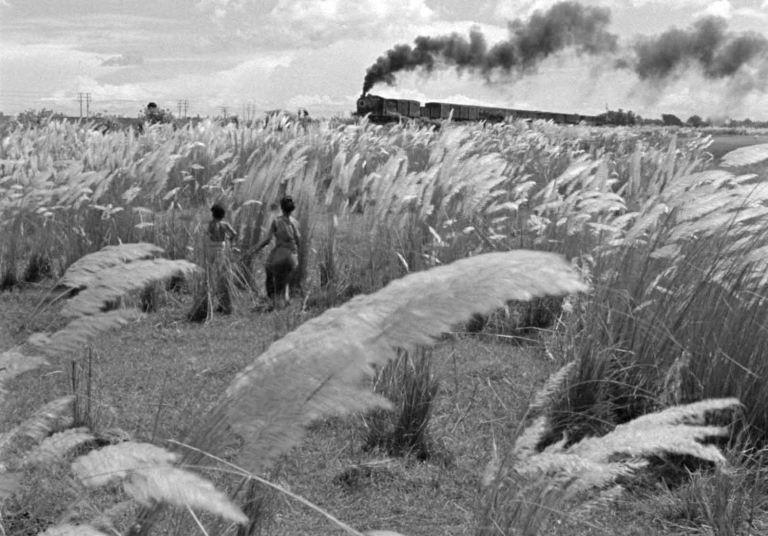 A still from Satyajit Ray’s ‘Pather Panchali’. The kash flowers are a symbol of impending autumn and Durga Puja festivities.

Which is why this year, the Durga Puja appeared to return to the very people at its core — those who cannot celebrate it. There were always people who could not be joyous during the puja, and this year, this group comprised nearly everyone. The puja had come home to those who never had it.

Yet to sweep the small complexities and the big joys of a beloved festival with a single brush is wrong. The puja committees of Bengal, their self-important secretaries and their appointed personnel at the microphones rose in unison to attempt an effort at maintaining rules. “I beg of you all, please do not come into the pandal without a mask, if a policeman sees us, they will close us down,” the voice in the loudspeaker, usually given to announcing the evening’s special function, pleaded.

Dhak players in masks sweated. Volunteers in masks also sweated. With pandals declaring themselves ‘no-entry zones’ following the Calcutta high court order, the small crowd at the 10-metre barricade in front of every pandal zoomed into the idol with their phone cameras. 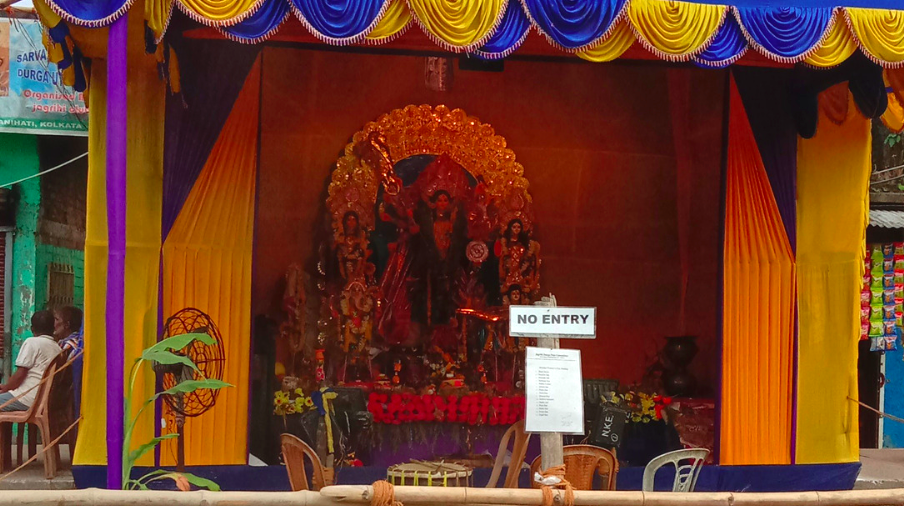 A ‘no entry’ board in front of a community puja on north Kolkata’s B.T. Road. Photo: Soumashree Sarkar/The Wire

Cultural activist Sundeep Bhutoria, who organises the Manicktala Chaltabagan Lohapatty puja, one of the glitziest community festivities in Kolkata and one with an unerring ability to unite personalities across the political spectrum (‘the chief minister and the governor were both at the festivities last year,’ mentions Bhutoria) spent a rare puja with a “near negligible” visitor count. “We began the pandal making process almost two months late. Two of our defining activities, the sindoor khela [where women sprinkle each other with vermillion] and the dhak utsav were both done away with. Instead, we made a film to be circulated and screened,” he said.

Like Chaltabagan, another crowd puller of a puja, the Bosepukur Sitala Mandir opened itself up so that visitors could see inside the pandal while walking or riding by. For the latter, this must have taken some humility considering that until last year, the Sitala Mandir would erect tall tin sheets on the road divider so that stragglers would not be able to catch a casual glimpse into the pandal. 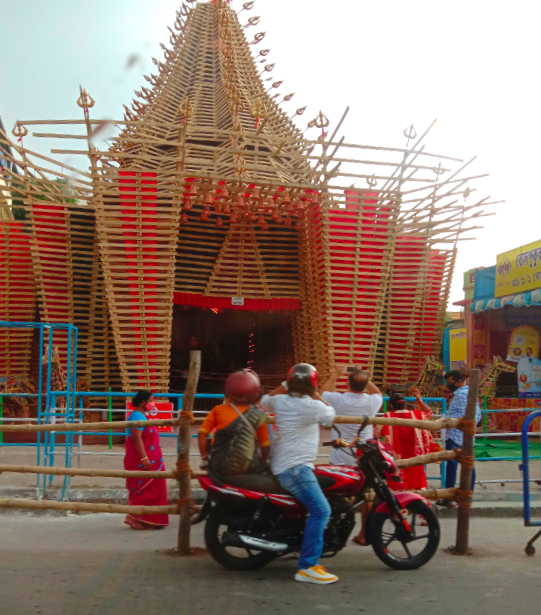 People take photos of a Durga Puja pandal in south Kolkata from the sidewalk and road. Photo: Soumashree Sarkar/The Wire

At Sinthee More, in the north Kolkata suburbs, a large field which would transform itself to a month-long carnival spot with at least three dangerous rides, 20 food stalls, three game stalls and a towering pandal, was empty except for a small pandal. The latter, in recognition of the times that are, was a likeness of the Calcutta Medical College.

There is no doubt that Bengal tried. To maintain restrictions, traditions that had evolved through three centuries were dispensed with. “I don’t remember a puja in the last few years where the house was closed to visitors. Even the traditional method of immersing the idols by first placing them between two boats and then hacking away at the three planks of wood on which the idol stood was done away with. Our idols are usually aekchala or one unit, but this year, we individually placed the five idols because people carrying the enormous structure shoulder to shoulder was not an option,” says Raina Ghosh. Raina’s mother Rasna belongs to the Shobhabazar royal family. 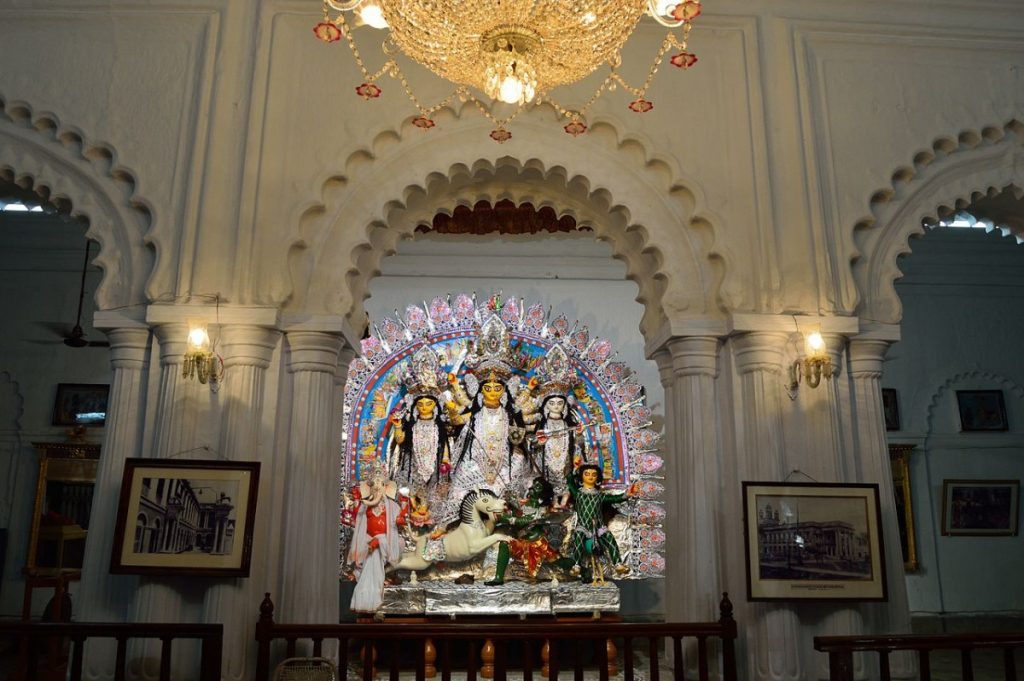 In 1757, the family’s founder, Raja Nabakrishna Deb, set the standard for what was to become the traditional Durga Puja. What was once a celebration attended by Robert Clive, is now two pujas on either side of a road in north Kolkata. The bigger is by the part of the family coming from Nabakrishna’s adopted son and the smaller, to which Rasna belongs, is descended from his biological son. While the bigger Shobhabazar puja opened itself to a trickle of visitors this year, the smaller one did not. Nor did the dhakis arrive, or the century old chefs who made the puja meal called bhog.

“We paid our ancestral dhakis, the chefs, the shehnai players who performed in the evenings, but asked them all not to come this year. Members of the family played the dhak when needed,” Raina says.

Sambit Chatterjee, whose ancestral home in Southern Avenue has been organising the puja for the last 83 years, has a similar story to tell. “When my grandmother passed away, we had the puja that year as well. She made us promise we won’t stop. But this year, we took the tough decision and paid our dhakis, chefs, the pandal workers and the priest, and asked them to stay in their homes. We put up a poster of the idol from 2019, lit a candle and played the dhak on a Bluetooth speaker. That was our puja,” says Chatterjee. 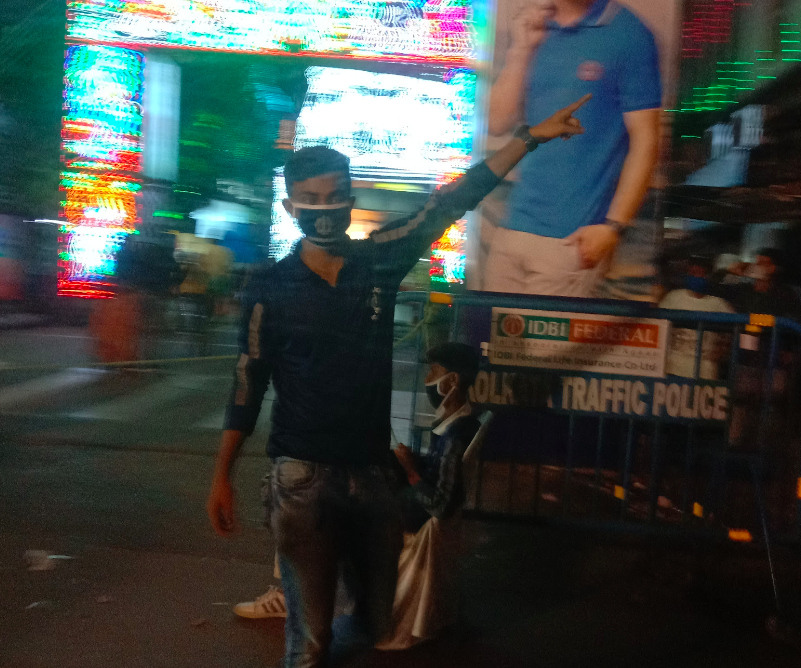 A Kolkata Traffic Police volunteer directs cars away from a lit gateway of a pandal in south Kolkata. Photo: Soumashree Sarkar/The Wire

The economy of the Durga Puja — a festival that artisans, musicians, performers, labourers, eateries and just about everyone in Bengal depends on for an influx of cash — has noticeably grappled with the new normal.

“The amount of donations we got was remarkably and understandably low. And comparatively, the money we found ourselves paying the dhak players and the priest was higher. Our dhaki took Rs 7,000 instead of the usual Rs 5,000 because in the absence of trains, he had to pay Rs 1,400 for each journey to and from his village to our building. Our priest had to take an Uber to and from his house to the puja venue,” says Kalapi Joardar, who organises the puja at the Parijat Building in south Kolkata. The puja which began in 1977 usually ensures a packed six days for the residents of the flats in the building, complete with meals, evening chat sessions and revelry that goes into the night. None of that happened this year.

“At one point, it was so quiet, I felt for the first time that it was truly a puja and not a festival,” notes Joardar. “Barring the police personnel who visited every evening to keep tabs on whether we were maintaining rules, we did not get a single visitor.”

In the rest of the city, what was a quiet Shashti (the sixth day of the time of the goddess), rose into a murmur at Saptami, and a buzz at Ashtami before erupting into a full scale cacophony at Nabami. The ninth day saw enormous crowds.

But even they were no match for the usual. By a wicked twist of fate, the late puja meant a chill in the air that was unfairly conducive to long hours of pandal hopping through the streets. Even crueler was the fact that thanks to the very pandemic which drastically streamlined the festivities, much of Bengal’s significant young population which usually has to stay away to work in other cities, was in the state this time. 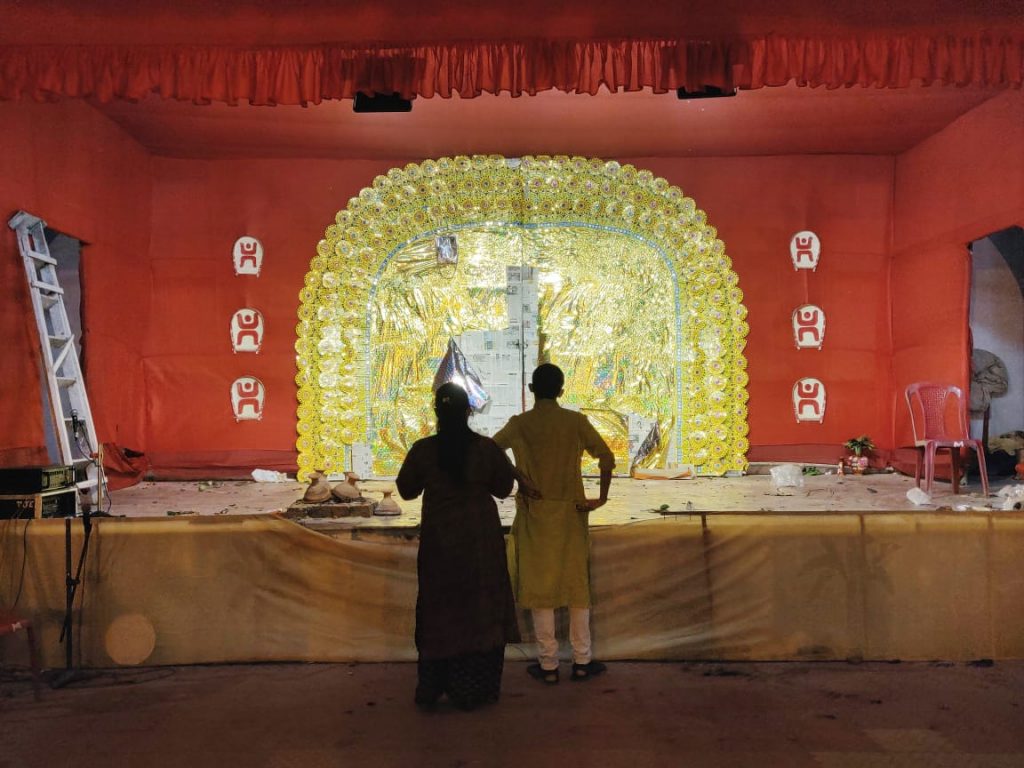 A man and a woman stare at an empty dais after the Durga idol has been carried away for immersion, in south Kolkata’s Golf Club. Photo: Ananya Chatterjee

In the absence of almost every other form of celebration familiar to this season, small solace can perhaps be found in the knowledge that when the idols move towards the Ganga for immersion in processions vastly smaller than the usual, people can still stand at their balconies, waving.