The Sachar Saheb I Knew

The Sachar committee completed the mammoth exercise of preparing a report in record time, busting the mistaken belief of Muslim appeasement. 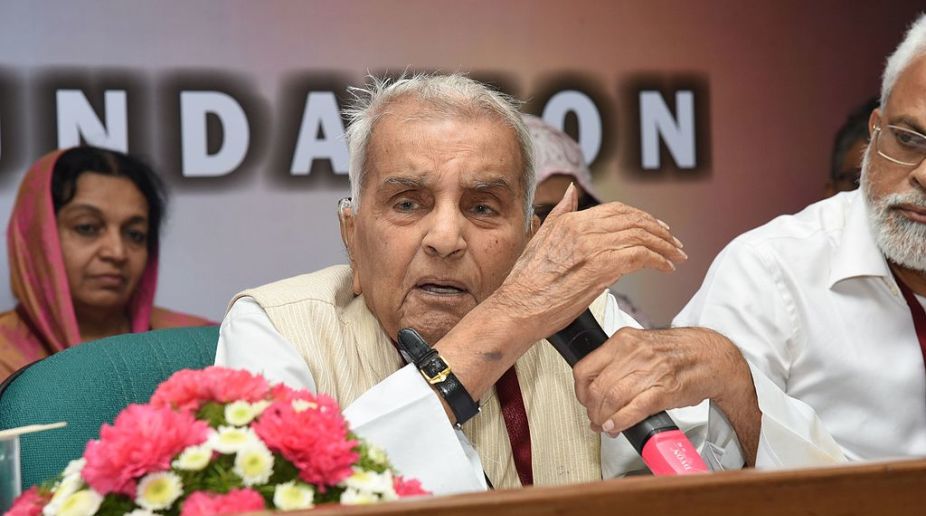 Justice Rajindar Sachar passed away on Friday. He was 94, so one could say that it was a life well lived, and that everything is eventually perishable in this world. What could be better than to be able to live by your ideals, and when you die, to have a ring of admirers to remember you. These words of consolation, of solace do provide succor to the bereaved. Yet, there is a void that Sachar saheb leaves. This sense of emptiness is compounded by the times we live in, when the values of trust and conviction are plummeting, both in public and in private spheres. Sachar saheb in his small frame, was far more towering when it came to living by the principles he cherished. And yet, he would rarely impose them on others.

Obituaries are difficult to write, especially of those who have moved you, influenced you, perhaps which is why you try to run away from attributing mortality to them. Obituaries are also a closure, an acceptance that ultimately the swan has flown away, alone. I have attempted to write tributes earlier, too, when one of the tallest communist leaders of the Naxalite movement passed away; when our leader at Jawaharlal Nehru University was killed by Shahabuddin’s (an RJD leader) gunmen in Siwan in Bihar; when a friend much younger than me died of heart failure. Never could I proceed beyond a few sentences. Similarly, it is difficult to write about Sachar saheb too. But,  perhaps I have matured now.

My close association with Sachar saheb began in the Prime Minister’s High Level Committee (set up in 2005 to prepare a report on the social, economic, and educational conditions of the Muslim community of India), where I was a researcher, and he, the chairperson. Whether it was the politics that we shared or his interest in the subject that I was researching for the committee or a combination of both, I was summoned far more frequently than my colleagues to his chamber. He would seek my opinion on the interpretation of tables that were furnished to him by the research team, but more than that, our discussion would be about a range of issues: history, the horrors of Partition, state of politics and also religion. As it turned out, most often I chose to be an avid listener, given the depth of his knowledge on these subjects. Those concerns were so close to his heart, and he spoke with such passion that he would often lapse into Punjabi, forgetting that a Bihari was sitting in front of him.

The committee toured the length and breadth of the country, and on his direction, closed door meetings with bureaucrats, police officers, ministers and chief ministers would invariably be complemented with public hearings. People travelled from remote towns and districts to share their grievances with the committee. There were special sessions with women representatives, NGO workers, and community leaders. These were learning occasions for all of us, when official truths, carefully calibrated data and the ‘glories’ of governments would be confronted by the reality and its perception on the ground. Sachar saheb ensured that the dignity of the ordinary person never diminished in the meetings in which high officials of the government were also present.

For me, there was a lesson to be learnt as to how one should conduct oneself while holding a responsible position and a high public office. Despite the insistence of the host governments, Sachar saheb never agreed to have a red beacon on his vehicle, a status pronouncement that very few would decline. A standing instruction from the committee was that the chairperson would stay only in state guest houses, no matter how shabby they were in comparison to seven-star hotels. This was the code of ethics that he had set for himself – never were these forced on others, the members, the researchers or the subordinate staff.

He was perhaps conscious that the report was being awaited by the people, and the task at hand had to be completed in time. Usually in government-appointed committees and commissions, given the perks, status and importance that come attached to it, there is a tendency to prolong its tenure. This very often suits both the governments of the day as well as those in these bodies. If truth is uncomfortable, better leave it buried. But Sachar saheb, from the very beginning, had made it clear that no extension would be sought. Ultimately, the committee completed the mammoth exercise in record time, with only one four-month extension to incorporate the information from the 2004-05 round of National Sample Survey.

Though not a specialist, Sachar saheb brought immense wisdom, a sense of uprightness and fortitude to the exercise. This helped the committee stay together and focused even in difficult times. The committee was accused of communalising the armed forces by seeking religiously disaggregated data of employment. The huge controversy that followed helped the chief opposition, the BJP, go hammer and tongs against it, but Sachar saheb remained undaunted. He defended the decision to seek the headcount of the defence forces on grounds that as it drew from public exchequer, it was accountable. 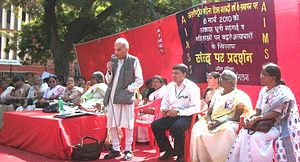 Sachar saheb founded the Socialist Party and was devoted to it till the end. Credit: Wikimedia Commons

It was not that indignities were not thrown at him. For accepting to head a government-appointed committee, many thought that he had fallen for sarkari lure. During a meeting, one chief minister (no prizes for guessing who), on being probed over the skewed figures of minority development from his state, chose to give it back to Sachar saheb: ‘Agli baar phir jab kisi committee mein aapka number lag jayega, phir aayiega’. (Come next time, when you are once again made a head of another committee). The bureaucrats laughed with their chief minister, adding insult to injury. For a person who was himself the son of a governor and chief minister, who had been the chief justice of a high court, served on national and international tribunals and panels, and one who had chosen not to run after positions, to be mocked at like this was hitting a little too low. It angered the committee, but Sachar saheb kept his calm – he simply repeated the question, conveying to the CM that nothing would deter him. A couple of years later, when the central government conferred on him the Padma Vibhushan, the country’s second-highest civilian award, he politely declined.

Sachar saheb’s optimism knew no bounds. In politics, he had immense confidence. He looked with dismay as the Anna Hazare anti-corruption movement swayed his colleagues of the socialist stream, one after the other. As one of them announced the coming of ‘new politics’ and predicted the end of ideology, Sachar saheb could foresee the onset of fascism. In spite of his advancing age, he founded the Socialist Party, and devotedly campaigned for it. Like a young party enthusiast, he was constantly on the lookout to rope in new people. I have a feeling, he had set his eyes on me as well. He would personally call me to ensure participation in the party programmes. His politics was,s however, not inanimate and mechanical but fashioned out of humane and life-affirming values. Every Eid and Baqr Eid, he would make it a point to greet all of us, a practice that he continued till his end. Farewell Sachar saheb. This Eid, you will be missed.

Tanweer Fazal teaches sociology at Jawaharlal Nehru University. He was a research consultant with the Sachar Committee.