Teresa Albuquerque, Historian of Colonial Bombay and the Goan Diaspora, is No More

She wrote on colonial Bombay and Goa with special emphasis on the 'Portuguese Impress.' 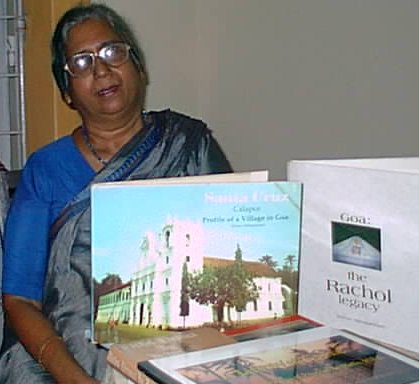 My first memories of Teresa Albuquerque were those of a fresher journalist encountering a seasoned historian. But that hardly mattered; she was genial and hardly bothered with issues like age or seniority. Albuquerque, who passed away in Mumbai on Monday at the age of 87, remained, till the end, accessible to all those who wanted to talk to her about her work as one of the premier historians of Mumbai and of Goans, especially the diaspora.

Hailing from a prominent Goan family – her brother was the famous journalist Frank Moraes and nephew was the poet Dom Moraes – Albquerque was born in Poona in 1930. The city was one of the more significant centres of Goan migration, though not on the same scale as Bombay. She graduated from the University of Bombay with Honours in English and French, and then did her Masters and a PhD in history.

It was her book Urbs Prima in Indis: An epoch in the history of Bombay 1840-1 865 that brought her recognition to the small but dedicated band of Bombay history lovers. It is still an important reference book for facts about colonial Bombay and its many facets, including subjects as different as media, the law and even the social life of the colonialists.

Subsequently, she wrote many other books including The Catholics of Bombay, Anjuna — Profile of a Village in Goa, Bassein — The Portuguese Interlude, Goans of Kenya and Goan Pioneers of Bombay. Her book Goa-The Rachol Legacy was about the 400 year old Rachol seminary of the Jesuits. These books collectively helped paint a picture of a community spread all over the world but rooted to its culture and traditions. Her writing style was accessible and easy for the layperson, but each book contained a wealth of information and insight about its subject and her books were in great demand by Goans around the world.

In recent years, she and her husband Matthew often shuttled between his village Anjuna in Goa and the suburb of Santa Cruz in Bombay. Though the former is now known more as one of the global hippie capitals, her family home, with its traditional architecture harked back to another time.

Albuquerque was awarded a scholarship by Heras Institute at St Xavier’s College, Mumbai to undertake research on the Goans of Kenya. This was one of the early books on the Goans who went to East Africa, another important centre of migration till the 1960s, and is often cited in studies that followed it. In her micro-historical studies, she delved into the colonial past of Bombay and Goa with special emphasis on the ‘Portuguese impress’.

My own equation with her finally matured into one of author-publisher and the one book by her I published was widely appreciated. Goan Pioneers of Bombay recorded the lives of 19th century migrants, both Hindu and Catholic, who moved to British-ruled Bombay from Portuguese-ruled Goa and, through hard work, made a place for themselves. She described her book as “the culmination of my interest in tracing from roots erstwhile Goan professionals who eked out an existence, bequeathing a rich and colourful legacy to the many migrants who followed.”