Street vending is the natural outcome of the urban process, almost never the result of urban planning or the absence of it. 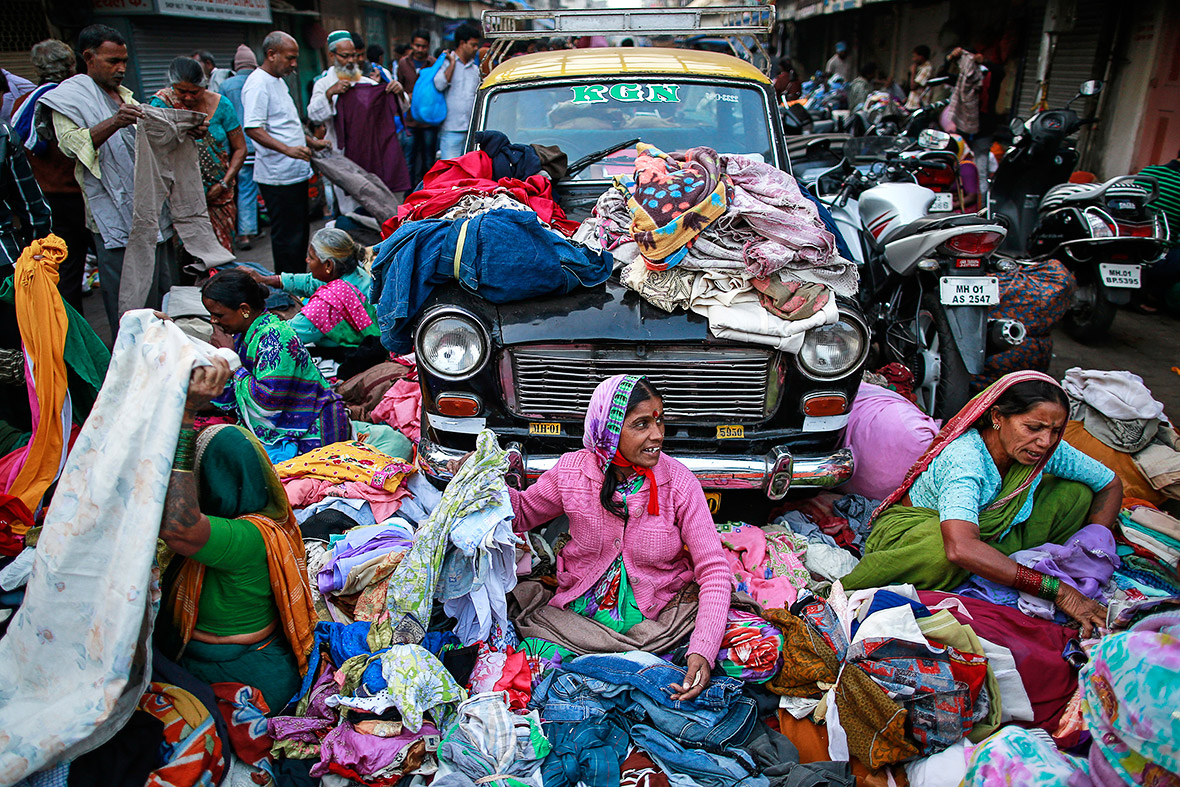 On October 11, a panel headed by the chief security officer of Western Railways submitted its inquiry report on the stampede at Mumbai’s Elphinstone Road station on September 29 to the general manager. The panel found that heavy rain was the cause of the accident. It claims that when passengers rushed to the covered staircase to avoid the rain, and ones carrying luggage lost their balance, it resulted in a stampede.

Therefore, says the report, there should be restriction on heavy luggage carried by passengers, and vendors should be restricted from carrying their goods during peak hours. The existing staircase should be widened, and one more must be added to facilitate passenger movement.

Thus, according to the Western Railways, the death of 23 people was part natural calamity and part a disaster of their own making.

Two days after the incident, the Western Railways initiated a ‘drive’ to evict ‘illegal hawkers’ from entry and exit points of stations and foot over bridges. On October 6, the authorities of the other line, Central Railways, issued a circular to all its station masters to document and report all ‘unauthorised hawkers/vendors, beggars or any unlawful activity’ that ‘obstruct free movement of passengers’ within station premises.

A PIL filed in the Bombay high court demanded that action be taken against ‘illegal hawkers and encroachers on foot over-bridges.’ The Maharashtra Navnirman Sena (MNS) chief Raj Thackeray urged the Municipal Corporation to meet the railways and initiate a ‘coordinated action’ against hawkers. In keeping with his party’s threat to take matters in its own hands, MNS activists beat up hawkers, wrecked their makeshift stalls and threw away their goods.

Eviction of street vendors and squatters often is the first (and sometimes the only) response to almost every urban problem. As ritual bloodletting, it is meant to signal that the machinery is working, and that “something is being done.” Common terms used to describe informal vendors suggest lawlessness (‘encroachments’), filth (‘eyesores’) and danger (‘menace’). But these terms say much more about our own conception of public space, our understanding of the nature and economic function of informal vending and our comprehension of the relationship between vendors and public space.

As old as the city itself

Street sellers are the informal supply lines of modern urban life. But they are as old as the city itself. As free-born citizens assembled in the Agora of ancient Athens, street vendors sold fabrics, pastries, fish, slaves, jewelry. The Spanish conqueror Hernando Cortes was awestruck as he described the massive squares of Tenochtitlan in the Valley of Mexico of the 16th century, where each day more than sixty thousand people bought and sold food, jewels, birds, timber, feathers and more. Hawkers were a common feature in the cities of medieval Europe, where anything that could be sold was carried through its streets on backs and in baskets. Their lyrical street cries have been immortalised in literature and art; a few of these are even today mechanically memorised and recited in our play schools (‘hot cross buns’).

The 19th century urban biographer Govind Narayan evoked the early morning sounds of Bombay city, where the rhythmic cries of street sellers, each with a ‘distinctive roll of the tongue,’ called attention to their sweet and salted neera, even before the ringing of the church bells and prayer chants of dawn began. The film industry would produce its own memorable tunes rendering hawkers and vendors of all kinds; Johnny Walker as a nasal street crier selling ‘tel maalish’ is perhaps the most unforgettable. 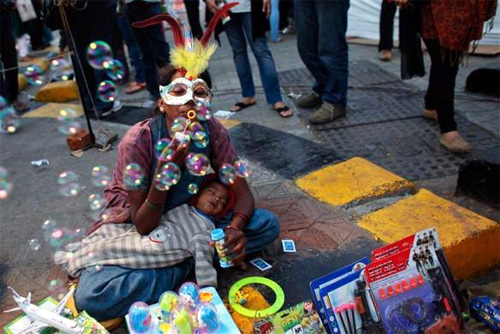 So common have vendors been to the urban experience that there is a wealth of descriptive terms associated with them. Just in the English language they have been known as street sellers, hawkers, traveling merchants, street vendors, peddlers, itinerant traders, vagrants, street criers, higlers, the trading proletariat, ambulant traders, costermongers, petty chapmen, packmen, pack carriers, hucksters. The range of terms suggest the richness of meaning, activity and experience, and a combination of different trades and specialisations that refuse to fall within any general category. Often they have been pioneers of expansion, opening up markets in unknown goods and services, in poorly serviced areas.

In our own cities, street selling is an extraordinarily diverse activity. Vendors sell a variety of different goods and services, carefully choose their locations and time, are equipped with different kinds of retail infrastructure and are often specialised in particular trades based on kinship and community networks. In Mumbai, street selling provides goods and services to most citizens, and direct employment to more than three hundred thousand people.

Also read: Property is Expensive And Life is Cheap on Elphinstone Road

Yet, this highly variegated activity and occupation of thousands who depend on them are characterised pejoratively as ‘encroachments’, a term that indicates that it is the primacy of property, not the bonds of solidarity or mutual dependence, that determines how we relate to one another in our cities. The poverty of our language indicates how little we understand, and how brutally we exclude.

For almost two decades, Mumbai’s city managers have been obsessed with constructing a ‘world-class’ city. Inherent in this project is an aesthetic normativity that produces both expectations about what the city must look like, and categories that legitimise erasure of the habitats of its working poor. As the American urbanist Asher Ghertner points out, this is a project where political decisions about who belongs in the city, and what ought to be built or erased, takes place through standards of order and appearance, rather than through social or rational processes of planning. ‘World-classness’ is recognised in the panoramic view of a new Sea-link, not in the opportunities the city creates for its street vendors. A ‘world-class’ experience is realised in the rush of high speed motoring, not in the simple convenience of a bus user.

The consequence of this imaginary has been that the entire network of occupations that constitutes informal street life, and offers a ‘precarious commons’ to the working poor, is now increasingly viewed as creating problems for ‘normal’ traffic flows and pedestrian movement. The problem of unregulated parking of privately owned cars – arguably the most serious encroachers of public space and obstructions for movement – is gingerly bypassed. Also ignored are the unauthorised extensions of shops on pavements, particularly around stations. Hawkers cannot be legal, because they look illegal. Problematised and stigmatised in terms that suggest deviance from both legal and aesthetic norms, street sellers have been routinely evicted and occasionally ‘rehabilitated’: tucked under flyovers, stacked into multistory buildings or relocated and confined within designated ‘zones.’ Where evictions take place, ‘beautification’ devices like ornamental plants and artificial lawns are deployed to prevent their return. 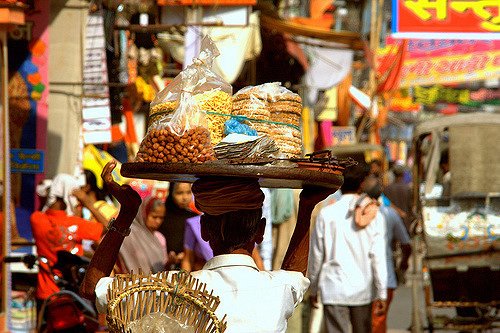 But contrary to the dominant view, street vending emerges around and facilitates pedestrian activity, provides affordable goods and services, promotes sustainable mobility and improves neighborhood safety. Street vending is an expression of economic opportunities inherent in urban street use. It is the natural outcome of the urban process, almost never the result of urban planning or the absence of it. It encourages close-grained diversity of economic and social uses that constitute the typical street scene in our cities.

When activity on streets increase, people watch over each other, streets become safer as public spaces. In contrast, some of the more desolate and unsafe streets tend to be the ones where vendor stalls have been removed or prohibited, a common sight in new middle and upper income residential neighborhoods. There, as social activity makes way for high walls and gated compounds, the ‘eyes on the street’ of users get replaced by ‘eyes in the sky’ of surveillance cameras and private security.

After violent evictions in the late 1970s and 1980s, vendor unions in India fought long legal battles to challenge nuisance laws and social stigmatisation. Early breakthroughs came in 1985 in the case of Bombay Hawkers’ Union and Others vs BMC, and then in 1989 when the Supreme Court ruled in Sodan Singh and Others vs NDMC that “the right to carry on trade or business mentioned in Article 19(1)(g) of the constitution, on street pavements, if properly regulated cannot be denied on the ground that the streets are meant exclusively for passing or re-passing and for no other use.”

Setbacks for vendors soon followed, first in 1998 when the Bombay high court stopped the paauti system that provided de facto recognition to unlicensed vendors who paid a small fine to the Municipal Corporation, and then in 2003 when the high court ruled in favor of the NGO CitiSpace and banned cooking on streets, vending within 150 meters around train stations and called for surveys to establish vending and no-vending zones in the city.

Then, after a decade of struggle by the National Association of Street Vendors of India and the Self Employed Women’s Association, the Protection of Livelihoods and Regulation of Street Vending (PLRSV) Bill was signed into a law in 2014. Despite its obvious limitations, this was a major victory for street vendors. The Act identified street vending as a legitimate vocation that needs to be protected and promoted, as opposed to being restricted and prevented. Vending permits could now be provided to up to 2.5% of the population of a city. Unions will find broad representation in vending committees. Places where sellers and buyers tend to congregate, also known as ‘natural markets’, are protected against eviction. No vendor can be evicted without comprehensive survey, and before vending certificates have been issued to all street vendors. 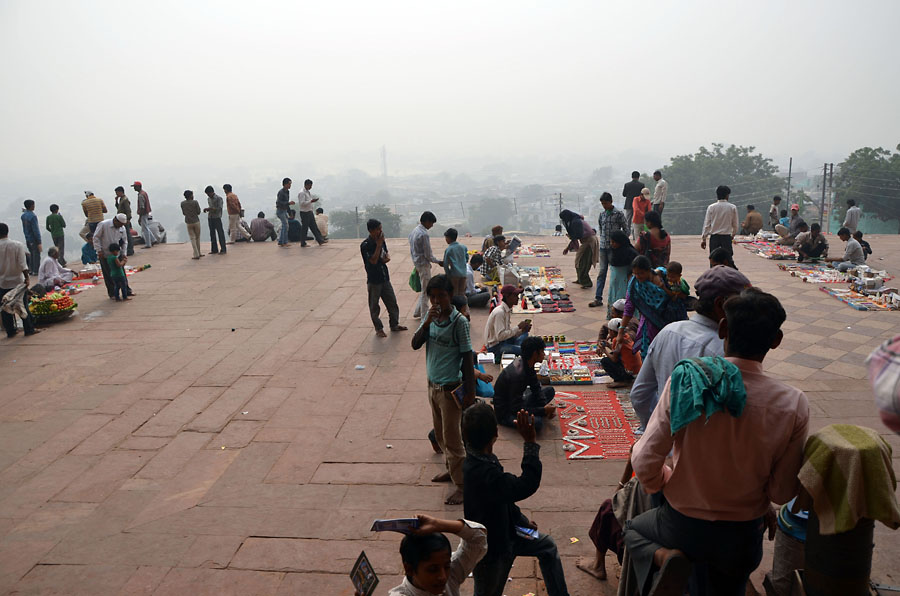 However, three years after its passage, there has been little progress in its implementation and none whatsoever in Maharashtra. Evictions, unlawful seizure and destruction of goods continues. Almost every Municipal Corporation here has been taken to court by vendors for violating the PLRSV Act. The law protects the rights of vendors on paper. On the streets, however, vendors still battle municipal eviction squads, residents’ associations and political party goons. Mumbai’s municipal commissioner now intends to remove vendors within 150 meters of all suburban railway stations – which actually would be illegal. For decades, Mumbai’s elite NGOs and residents’ associations have referred to themselves proudly as ‘law abiding citizens’ to distinguish themselves from the ‘lawless’ hawkers. But today, as they campaign for hawker-free zones, the law is firmly on the side of the vendors.

As automobiles demand additional lanes and parking space, sidewalks are being eroded, vendors and pedestrians are being squeezed out of our streets. Bureaucrats, policymakers and planners seem to struggle to come to terms with the dense and visually confusing streetscapes of Indian cities. The solutions they churn out are based on prioritising automobiles, separating functions and designating uses. Everything in its ‘rightful’ place. But is this how our streets work?

Undoubtedly, if streets and transit nodes are to work well, regulation is a must. But can a regulatory regime be built on the basis of ignorance, fear and suspicion? Adequately serviced, generously allocated and well-shaded pavements equipped for pedestrians and vendors are easy to design and build. Similarly, it is easy to to provide more pedestrian bridges and upgrade the capacity of ones that already exist. What is more resistant to change, is something more fundamental: our conception of what public spaces are, how they work, and who we imagine in them.