As Moose Wala was cremated amidst hundreds of his fans in his hometown of Moosa, up came the memories of Chamkila, another famous Punjabi singer who was gone too soon. Jalandhar: Sidhu Moose Wala aka Shubhdeep Singh Sidhu (28) was cremated amidst a sea of his fans on Tuesday, May 31 at his native Moosa village in Punjab’s Mansa district.

Before his funeral, Moose Wala’s body was taken to his agricultural land on his favourite tractor 5911, which he used to plough fondly. He proudly equated his image with that of the 5911 Tractor and even went by the name ‘5911’.

The singer’s fans, which included youth, children and even the elderly, came to Moosa village not just from Punjab, but from Haryana, Uttarakhand, Himachal Pradesh, Rajasthan and Uttar Pradesh too. Moose Wala’s parents were left inconsolable by the death of their only child. 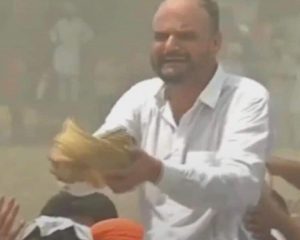 Moose Wala’s father, Balkaur Singh, removed his turban in a symbolic gesture, asking for the life of his son back. Photo: Special arrangement.

Right from the word go, Moose Wala was a crossover star. He caught everybody’s attention with his unique mix of Punjabi pop and rap.

It was this unique style which put him on the radar of stars from across the globe. Canadian rapper Drake was one of the many people who paid homage to Moose Wala after his demise, uploading a picture of him on his Instagram story. Similarly, Canadian YouTuber Lilly Singh urged her audiences to play Moose Wala’s songs as a tribute to him.

Even Bollywood stars like Anil Kapoor, Sanjay Dutt, Ranveer Singh, Ajay Devgn, Vicky Kaushal and many others expressed shock and grief over his tragic killing.

Unlike other singers, Moose Wala branded himself a rebel; a robust village boy who would proudly wear Kurta-Pajama, don a turban and spend time farming when he wasn’t singing. Moose Wala had gone to Canada for further studies but after making it big in the music world within a few years, came back to his village.

Back in Toronto, where Moose Wala went for studies, his friends were in disbelief at his passing. “While we got jobs and settled in Canada after completing our studies, Sidhu Moose Wala went back to his village to pursue singing. He became a huge success and we used to love his songs. Moose Wala was not how he presented himself in his videos, rather, he was a simple boy with ambitions to rise in life. We wish he, too, had settled in Canada…”, said Jaskirat Singh and Mandeep Singh, two of his friends from Toronto.

Though some found Moose Wala’s references to guns and violence in his songs objectionable, among others, they made his songs all the more popular.

His ‘macho image’, his style of speaking truth to power, his blending of English and Punjabi to write catchy lyrics which, at the same time, commented on society are all things which made him an icon among his fanbase, which runs into the millions across the globe. His far-reaching network of fans gives truth to his lyric, “Thode sheharan wale a fan mere…” (The youth of your city are fans of mine).

Moose Wala and Chamkila both gone too soon

The singer-rapper’s killing brought back the memories of yet another legendary Punjabi singer, Amar Singh Chamkila, known for his foot-tapping, catchy, rustic and mischievous songs.

Both Moose Wala and Chamkila died at the age of 28; both were at the peaks of their careers, when they were shot dead, which they both were.

Chamkila was, however, killed when militancy was at its peak in Punjab. The case of his death remains unsolved till date.

Sandeep Singh (50), a businessman from the Birring village in Jalandhar, said that not many people know the exact circumstances under which Chamkila was killed. Sandeep said that Chamkila had come to Mehsampur village to perform at a pre-wedding function of a man who had returned from Canada.

“We were eagerly waiting for Chamkila to come to our village, Birring, to perform at our family wedding on March 9,” Sandeep said. “But he was killed in Mehsampur on March 8. Chamkila was coming out of his car when he was shot dead along with Amarjot and two other members of his troupe.”

The similarities don’t end there. Both Moose Wala and Chamkila managed to rile up the conservative classes of society with their content while still maintaining their own distinct styles of singing. While Moose Wala was blamed for promoting gun culture, Chamkila was targeted for singing songs filled with double-entendres; primarily those based on extra-marital relationships.

While Chamkila’s songs reflected rural life in Punjab, he went on to woo audiences across the globe too.

Chamkila’s experiment of singing duets with his female counterpart, Amarjot Kaur, on stage was another big reason behind the success of his live shows in Punjab. The duo of Chamkila and Amarjot never disappointed.

But Chamkila didn’t only make music designed for parties, he also sang religious songs, after he received threats during the militancy period in Punjab, warning him to stop singing songs with ‘lewd’ or ‘indecent’ content.

These included songs like ‘Dhai din di prauni ethey tu, aiwi na jinde maan kari’ (You are here in this world for a short period, don’t be proud); ‘Naam japp lai nimani jinde meriye, aukhi vele kam ayuga’ (Pray before the almighty, it will help you in your tough time) and ‘Baba tera Nankana’ on Nankana Sahib in Pakistan.

Talking to The Wire, Usha Kiran, a Ludhiana-based Punjabi singer who sang with Chamkila, said, “We are in utter shock after the killing of Sidhu Moose Wala. His gruesome killing is a grim reminder of Chamkila’s tragic end. Moose Wala’s killing is a huge setback to the music industry and his fans across the world. He was a self-made singer and a global star.”

About Chamkila’s musical journey, she said, “He was one such singer whose songs were listened to by one and all. The only difference is that men would listen to him openly in ‘akharas’ in the 1980s, and women secretly.”

“Things might have changed now but people simply loved his songs. People largely blame him for singing ‘double-meaning’ songs, but then there are many other Punjabi singers who have sung such songs too,” Kiran said. “Chamkila was targeted because he became a star overnight. He was a rage and literally overpowered the Punjabi music industry, leaving no scope for any other singer to perform or rise.”

Recalling her duet-singing days with Chamkila, Kiran said, “One can gauge his fan following from the fact that whether it was sweltering heat, bone-chilling cold, rain or shine, his fans never left his akhara mid-way. Such was his charm that whenever he would come on the stage with Amarjot, people would jostle to have their glimpse.”

“There were instances when people standing atop mud houses to listen to Chamkila’s live performances would either fall down from the terrace or the old structure would come crumbling down,” Kiran recalled. “Many people also planned their weddings as per the availability of Chamkila’s dates.”

Kiran’s husband, Ramjit Mauji, who spent a long time with Chamkila, also lamented Moose Wala’s killing. “Everybody is in shock after. We faced a similar setback when Chamkila was killed,” Mauji said. “Even Chamkila was getting threats for his songs through anonymous letters, when finally he was gunned down.”

US-based writer Ashok Bhaura, who has penned over a dozen books on the history of Punjabi music and had spent a considerable time with Chamkila, said, “Sidhu Moose Wala’s broad daylight killing is a blot on the Punjabi Music Industry. Earlier, Amar Singh Chamkila and another Punjabi singer, Dilshad Akhtar, were also shot dead for one reason or the other. The kind of popularity Michael Jackson enjoyed in his album ‘Off the Wall’ was what Sidhu Moose Wala enjoyed in his first song. Moose Wala was a youth icon and he struck a chord with people across the globe, be it in the US, UK, Canada, Middle East, Europe or Pakistan.”

Bhaura said that it is highly unfortunate that Sidhu Moose Wala became a victim of an alleged gang war; Chamkila, that of militancy; and Dilshad Akhtar, gunned down by a cop during his concert just because he refused to sing one of his favourite songs.

The writer mentioned that in the case of Chamkila’s success, Amarjot also had a big role to play. “The duo just complemented each other. Amarjot was a wonderful singer and very beautiful too. Both Chamkila and Amarjot’s pronunciation and style of Punjabi words, diction and delivery was such that people would end up asking for more. It would become difficult for them to wind up their shows. In Sidhu Moose Wala and Chamkila, Punjab has lost rare gems,” Bhaura said.