Muslims and Pandits Work Together to Restore a Temple in Kashmir

This is only the latest event in the tradition of upholding communal harmony in Acchan village of Pulwama. 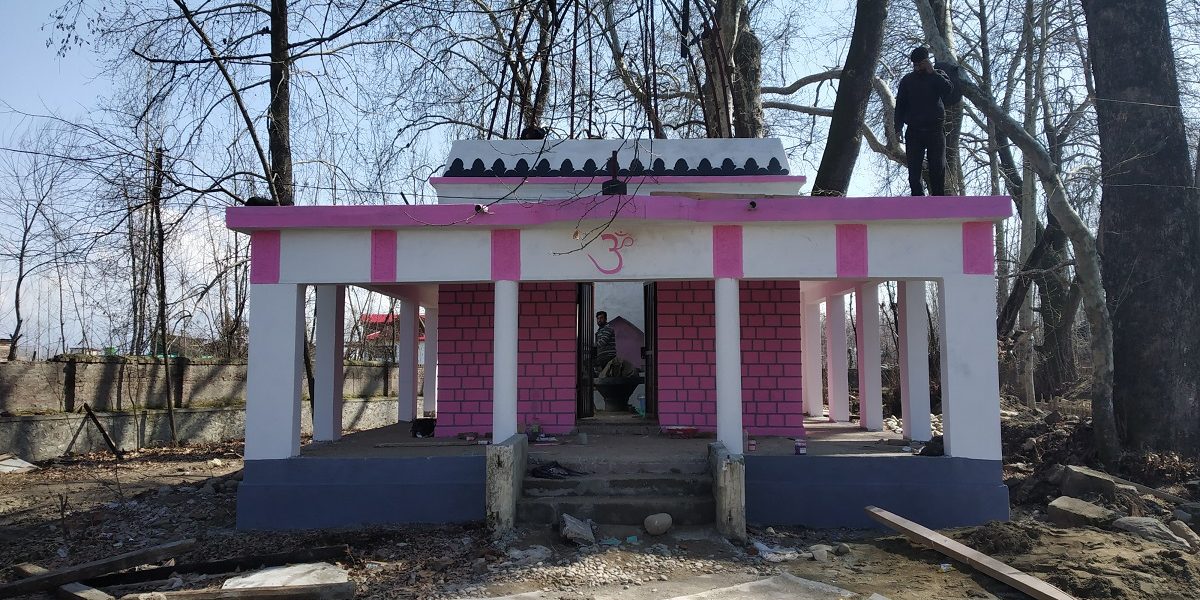 Acchan, Pulwama: Setting an inspiring example of communal harmony, neighbours from Muslim and Hindu communities have started restoring a temple in Acchan, a village in the militancy-stronghold district of Pulwama in South Kashmir.

Known as Swami Jaggarnath Asthapan, the Hindu temple will probably be opened for prayers and worship in the coming week.

The 80-year-old temple’s structure would remain the same – dome-like rooftop, a bell hanging from the ceiling and colourful walls surrounding the sacred Shiva Ling.

The restoration came to a halt after the Pulwama terror attack and subsequent harassment of Kashmiri students, traders and businessmen outside the state. The work resumed a week ago.

Besides serving tea to labourers who are working at the temple, Muslim neighbours everyday pay visits to the site to supervise the work at the temple.

Before the 1990s, Acchan was home to around 60 Pandit families. Like other villages and towns of Kashmir then, the local Pandits of this village migrated after the armed insurgency began. Only Bhushan Lal’s family preferred to stay back. 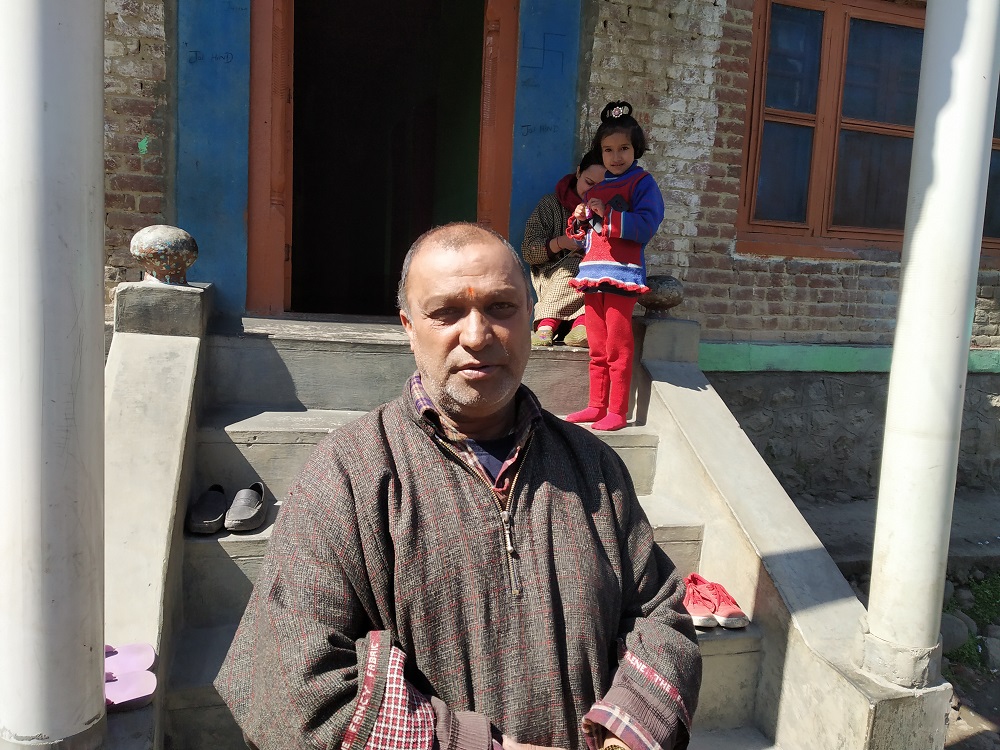 Bhushan’s house is located just a few yards away from the temple. He is living with his three brothers Sanjay Kumar, Deep Kumar and Ashok Kumar.

“I decided to stay back. Why would I leave my native village?” Bhushan told The Wire. “Even during the 1990s, I used to go to the temple for prayers every day. But its condition was deteriorating with each day.”

Last year, Bhushan approached the Mosque Auqaf committee to inform them about the dilapidated condition of the temple. “Like always, this time also, I received a positive response from my Muslim brothers,” said Bhushan. “We together raised the issue of the temple with a concerned government official. Muslim neighbours helped me at every step.”

Despite only one Pandit family living in Acchan, the villagers pressed hard for the restoration of the temple.

When the government released the funds last month, Bhushan with the help from his Muslim neighbours started the reconstruction.

Shabir Ahmad Mir, a painter by profession, is currently working at the temple. “When Bhushan Lal told me about the restoration of the temple I cancelled all my deals. I wanted to work at the temple first,” said Shabir. “I didn’t want Bhushan Lal to feel alone. Like we respect our mosque, it is our responsibility to also respect the temple. While working here, we take care of everything.” 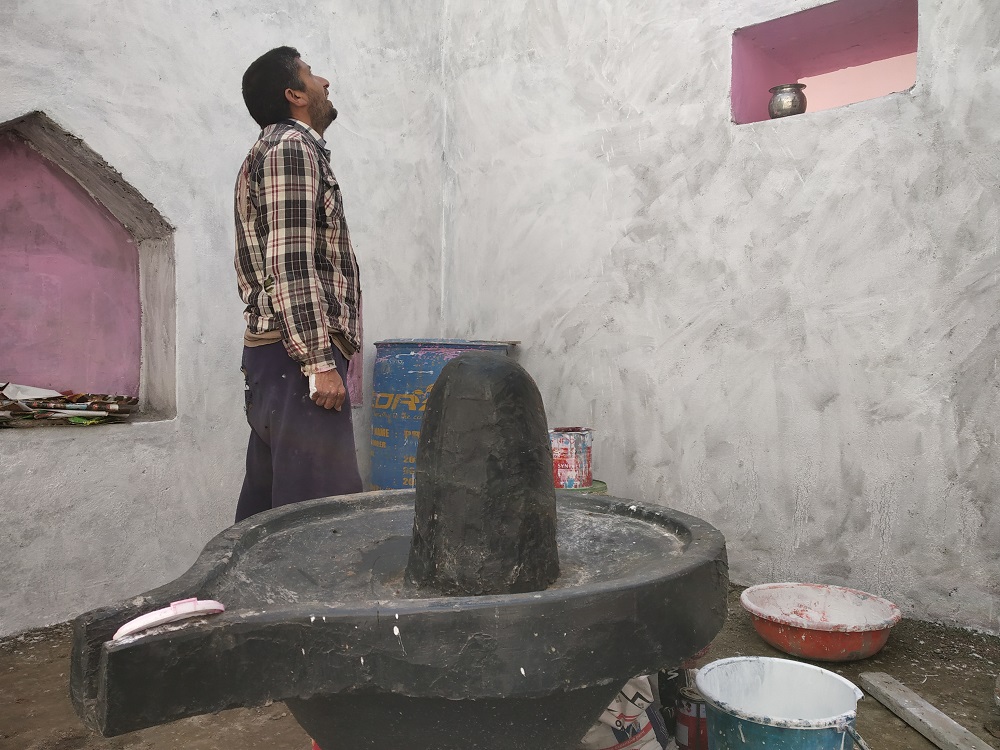 Among the other labourers who are working at the temple are Ghulam Nabi Sheikh, Mushtaq Ahmad Malik, Tanveer Ahmad Malik and Bhushan’s youngest brother Ashok Kumar.

The temple was one of the most revered temples in South Kashmir, said Bhushan, with thousands of Pandits from other villages visiting tit before the 1990s.

Adjacent to the temple lies a mosque, making the village’s religious landscape unique. Both mosque and temple share the same path.

“Before the 1990s Muslims and Hindus used to walk through the same path, gossiping with each other, before entering their respective holy places,” said Ghulam Nabi, a villager. “We want those days to return.”

Like his father Kashi Nath, Bhushan is a Hindu priest. When Kashi died five years ago, hundreds of Muslims mourned him. They performed his last rites.

“I never felt alone in this village. I even don’t know how the cremation of my father was arranged. Who took his body to the crematorium?” said Bhushan.

Most of the Pandits in Acchan were highly educated. One among them was Chaman Lal. Chaman, who was once a deputy commissioner, migrated from the village in the 1990s. Villagers still remember him for his good deeds. 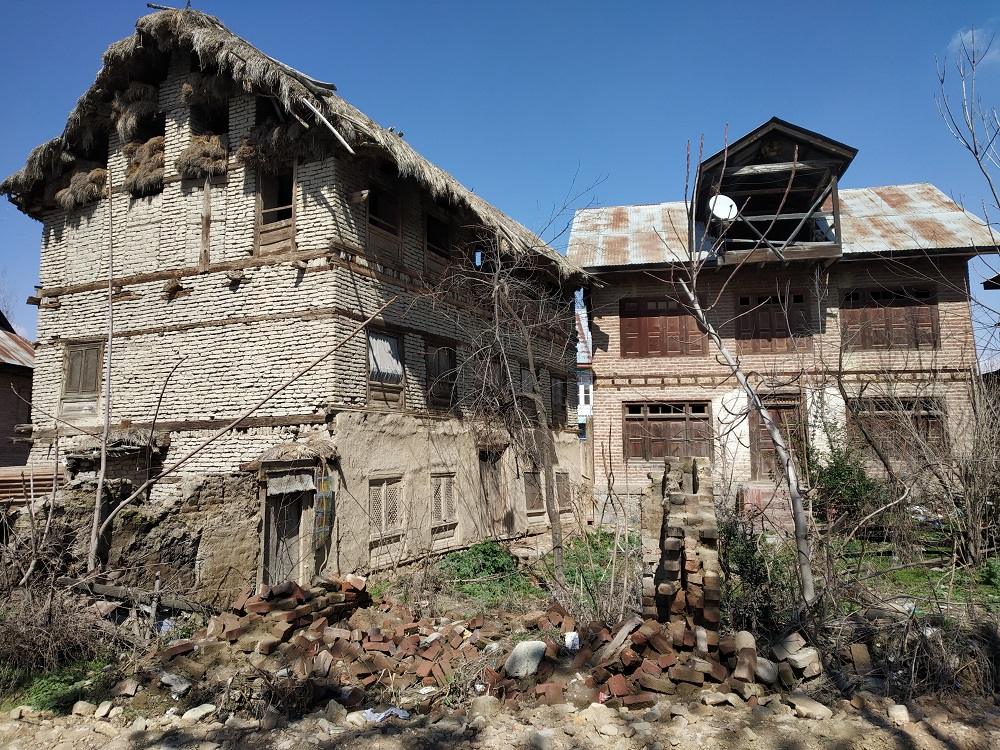 Shabir, the painter, said, “Chamanji was an honest man. He made sure roads were constructed and brought government schools and other essential facilities to our village.”

Sitting next to Shabir, another villager Javaid Ahmad chipped in and talked about his own Pandit teacher. “I will never forget my teacher and mentor Ashok sir. He was the best teacher in our village. He was caring and kind.”

Villagers are waiting for the restoration to be completed. They hope that once the temple is restored, thousands of Pandits will again throng this holy place.

“Religion doesn’t teach us hatred. It comes from our dirty mindset,” said Shabir. “Our village is incomplete without our Pandit brothers. We would be delighted if they return and live with us.”