The Unrevealing Nakedness of Milind Soman

Keeping the spurious nature of what constitutes obscenity aside, the actor-model's unclothedness demonstrates the ongoing consumptive relationship between India and Goa, liberalisation and naked pleasures entwined. 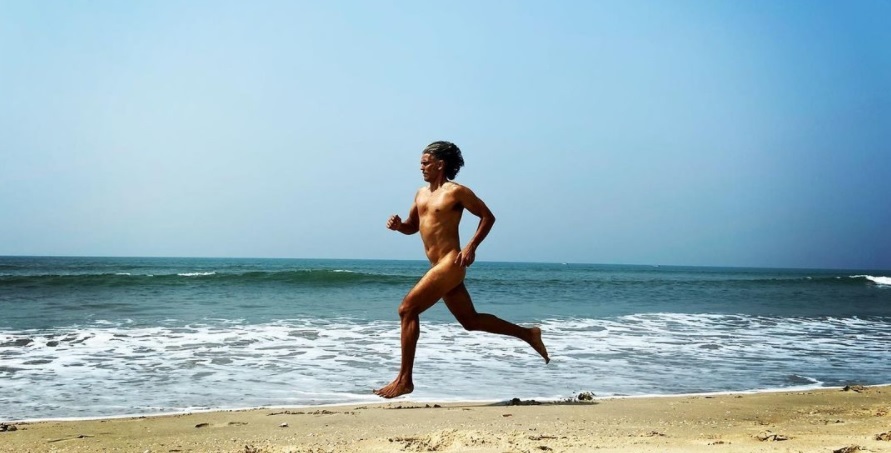 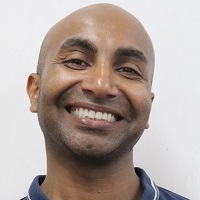 True, it was not the first time that the world had seen Milind Soman naked. And, yet, for all the reactions it has generated, Soman’s history of public nudity is a small one. Two events in total – 25 years apart – in the chronicle of Soman’s unclothedness have sparked much controversy, the most recent occurring on his 55th birthday.

“Happy Birthday to me!” Milind Soman’s Instagram post reads on November 4, 2020. In it, the model and actor is seen running on a beach in Goa, undressed. While it is apparent in the photograph that Soman is indeed naked, the camera catches him mid-stride, genitalia obscured.

The non-event resulted in charges of obscenity being brought against him. But the spurious nature of what constitutes obscenity in the eyes of the law is itself debatable. The episodes involving Soman’s déshabille, which I reference are hardly notable for their claimed impropriety; rather, more attention should be paid to what these occurrences conceal.

Soman would not be the first to have pranced upon Goa’s beaches as bare as the day he was born. In comparison to his provocative but short record of being seen unclad, nudism on Goan sands has occupied the Indian imagination since the 1960s. This, shortly after the annexation of the formerly Portuguese region by India in 1961 and during the era that saw European and American “hippies” make their way to the subcontinent.

Not a novel idea

Drawn to the Konkan coast by Indian spirituality, the counter-cultural movement saw white youth shirk off their ties to the middle-class values of their parents and homelands by seeking to be one with nature, drugs and nakedness part of the formula they concocted in the purportedly lax atmosphere of Goa. Truth be told, the Church disapproved of the naturist ways of these rebels as did locals, though their presence became a source of income on Goa’s beach belt. As Raghuraman Trichur posits in Refiguring Goa: From Trading Post to Tourism Destination (2013), the arrival of the west’s disenfranchised youth triggered the beginnings of tourism in Goa, in turn entrenching the then-Union Territory within the Indian political economy.

If Soman chose to celebrate his birthday in the buff in Goa, his idea was not a novel one, taking cue as it did from the rebellious Western youth of yesteryear in the same locale. And while the obscenity charge levelled against Soman for this latest incident of being in the altogether is dubious, one would be hard-pressed to read the celebrity’s actions as being radical or even revealing.

When the hippies bared their bums on Goa’s beaches in the 60s and 70s, the shirking of their garb was a symbolic act of rebellion against establishment norms, the Vietnam War, and respectability politics. It was an attitude that was not localised to Goa but had global ramifications. 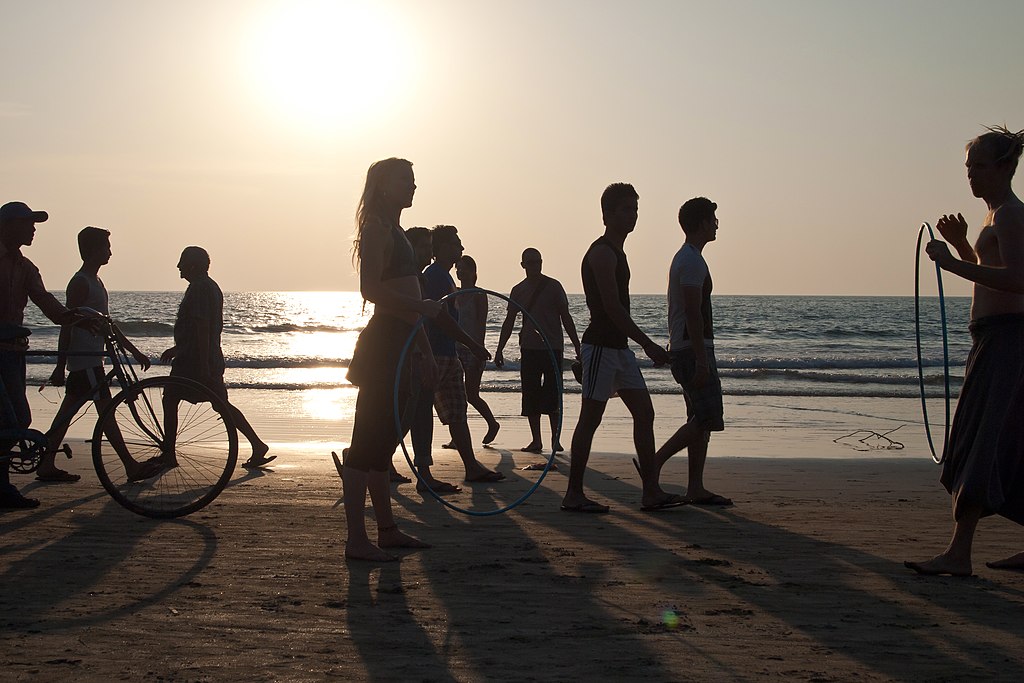 Representative image of hippies on a beach in Goa. Photo: Vyacheslav Argenberg/ Wikimedia Commons CC BY 4.0

In comparison, Soman’s nakedness reads as an act of self-indulgence, not least while the coronavirus pandemic continues to rage on. It would be difficult to imagine the same person – an avid and regular runner – taking a jog down one of the crowded streets of his native Mumbai unmasked and without a stitch of clothing on. Indeed, it is Goa, or some skewed notion of it, that apparently makes it possible for visitors to act differently here than they would elsewhere. As a pleasure periphery to India, seemingly, anything goes in Goa.

Ironically, Goa’s former status as a refuge for the anti-establishment hippies led to the advent of commercialised tourism which, since the liberalisation of the country’s economy in the 1990s, brings in hordes of tourists from India. And from the same genesis, legends of once rife nudity also function as enticement. Consider that the number of rumours of nude parties in Goa is only rivalled by regular official claims to the contrary.

Also Read: We Shouldn’t Be Blaming the Indian Tourist Alone for Goa’s Troubles

25 years ago, another symbolism

Just as one can trace the liberalisation of India’s economy to the growth of Indian tourism in Goa, a similar link is to be made between the country’s recent fiscal history and the little sagas of Soman’s public nakedness. Pre-empting the newest episode of being publicly bare on the beach, in May, Soman mused on social media about how his infamous 1995 footwear advertisement with Madhu Sapre would be received now. The black-and-white photograph depicts Soman and Sapre cleaved to one another, a snake clinging to and concealing their chiselled nudity. Completing the Adam and Eve allusion, instead of fig leaves, the two are seen wearing only the sports shoes that the advertisement is for.

Deemed highly controversial at the time of its publication, it would take fourteen years for the two models to be acquitted of obscenity charges. Nonetheless, the spectacle of Soman and Sapre’s fit bodies spoke to its moment, symbolizing the confidence of an emerging Indian middle class with a disposable income that marked the difference between them and a prior generation. The rise of opportunities borne out of India’s new fiscal path in the nineties, Michiel Baas suggests in his book Muscular India: Masculinity, Mobility & the New Middle Class (2020), also translated into a focus on fitness.

As can be implied from its title, Baas’ book is centred on the equation between post-liberalisation opportunities for men and the kind of muscularity they develop or aspire to as markers of middle-classness. If there is a footnote to what becomes of women who flaunt their bodies as evidence of their own self-making, then perhaps it is to be found in the 1995 picture of Sapre and Soman. Then a couple, while Soman continued to make a name for himself – despite the controversy – going from being a model to an actor, Sapre’s star faded until she fell out of the Indian entertainment industry entirely.

If 25 years ago, Soman’s nudity and its outcome was a case study of gendered difference as India entered a new economic landscape, then the most recent episode of his unclothedness demonstrates the ongoing consumptive relationship between India and Goa, liberalisation and naked pleasures entwined. But in the midst of all seemingly laid bare, what goes unseen?

What the Indian tourist does not witness are the struggles of Goan people trying to save their beloved homeland from the ravages of untrammelled development that threatens the natural landscape the region is famed for and is often seen advertised in tourism brochures. In Chandor, protests continue against the laying of tracks of the South Western Railway which could lead to an increase in coal imports and related pollution. And as if a worldwide pandemic were not underway, the state has been reopened to tourists while its healthcare system remains unable to deal with the rising number of coronavirus infections. To date, Goa, despite its tiny size, records the highest number of virus-related deaths in the country per million.

Nakedness may imply being one with nature, but the myth of Goa as a free-for-all state is unnaturally perpetuated, nudity and discussions of propriety obscuring the struggles of the local populace. Much remains hidden in plain sight.

R. Benedito Ferrão teaches at William and Mary in Virginia, USA and is currently a fellow at Bayreuth University, Germany.