As many as 66 children in the state have died by suicide during the lockdown. 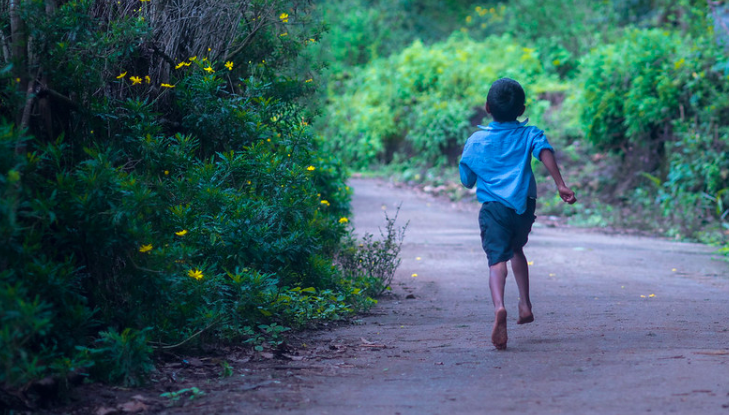 Representative image of a boy running in Munnar. Photo: Navaneeth Kishor/Flickr (CC BY 2.0)

Kottayam: The Kerala model of development has been much acclaimed but its efficacy has come under the radar with the number of suicides among children in the state, especially during the lockdown period.

The State Crime Records Bureau (SCRB) figures have it that the number of children who died by suicide from March 25 to July 10 is 66. The number in the corresponding period of the previous year is 83. Though the figure is smaller in comparison to the previous year, the fact that so many children died by suicide while remaining at home during the lockdown demanded that the situation get a closer look.

Kerala is celebrated for its education, healthcare, life expectancy, and low infant mortality, and yet the state has yet struggled to formulate a strategy to stem suicide among children. According to the SCRB statistics in 2014, 330 children died by suicide in the state of Kerala. In 2015 the number was 297, and in 2016 it was 242.

“Kerala’s suicide rates are higher than the national average. The lockdown is anxiety-inducing, but it cannot account for these suicides entirely. Both the government and individuals have begun conducting research in this area,” said Dr Anju Mathew, assistant professor of psychiatry, Government MCH, Thiruvananthapuram.

Kerala chief minister Pinarayi Vijayan, while speaking to media persons, and mentioning the number of children who died by suicide during the lockdown, said that a team led by Fire and Rescue Services DGP R. Sreelekha will study them in depth.

According to the statistics of the SCRB, among the 66 children who died by suicide, 64 are in the age group of 12 to 18, whereas two are below 12 years. Malappuram district recorded the maximum number of nine child suicides, whereas Thiruvananthapuram Rural recorded the second highest number of eight child suicides.

The news of 15-year-old student in Malappuram district dying by suicide over not being able to attend classes telecast through the Victers channel had created ripples.

The incident happened on June 1, just after 4 pm. The class was scheduled at 4.30 pm.

The child’s parents said in the aftermath that they had tried to console her by saying that she could follow her lessons later. “The television and smart phone we had were faulty and due to financial troubles we were not able to repair them,” her father said.

Belonging to the Scheduled Caste community at Valanchery, the child’s father had been engaged in contract work for the Kerala State Electricity Board. The health crisis had brought about a host of financial problems.

Yet the child was a brilliant student who scored high marks and was class leader. The father added that it was a cause of particular grief for him that his daughter died by suicide 200 metres from the house at a time when she was largely spending her days with family. “Had it been at any other time, I would have thought that she had had some problems in school,” he said.

Also read: Abused, Married Off and in an Emotional Crisis: Children Bear the Brunt of the Lockdown

Dr P. N. Suresh Kumar, professor of psychiatry at the KMCT Medical College in Calicut told this reporter that though general academic pressure, relationship issues and substance or alcohol consumption are perceived to be factors that go into increasing helplessness among children, the act of suicide itself a cry for help.

Dr Suresh said that knowledge of how to die by suicide is, worryingly, also growing among children. Among the 66 suicides during the lockdown period, 61 were by hanging, three by poisoning, one jumped from a height and one set herself on fire.

The World Health Organization, in a circular on March 18 this year, titled ‘Mental health and psychological considerations during the COVID-19 outbreak,’ asked for utmost care to children during the pandemic.

Noted psychiatrist Dr C.J. John says that it is a matter of grave worry as to why the children of the state die by suicides when they are with their families in the lockdown period, considering that the presence of loved ones is held as reassuring.

“A comprehensive study into the issues has to be conducted and the government should entrust some eminent health professionals to undertake the study,” he said.

Among the seven main goals of the Ardram mission of the government is suicide prevention among the general population, along with the reduction of depression.

Though the state mental health programme’s counselling outreach, Ottakkalla Oppamundu (‘not alone with you’), has reached out to 64,000 students in the past two weeks, officials were able to identify only seven children with suicidal tendencies. A total of 10,299 children were given counselling till July 10 in which 3,084 students were identified as suffering from stress and 2,905 students were identified as suffering from anxiety.

As many as 311 children were identified as having “behavioural issues” and 38 are suffering from depression.

Also read: Where Have the Children on the Streets Gone?

Dr Kiran P.S., State Nodal Officer of the State Mental Health Programme, said that the counsellors of the department and the health workers are actively engaging with children. “There was no exclusive programme intended to reduce suicides in children previously. After the statistics of the children who died by suicide was discussed the Department of Women and Child Development, the State Mental health Authority is planning to conduct a detailed study on suicides among children,” Dr Kiran said.

According to Dr Boban Eranimos, a clinical psychologist, the main hurdle faced by children is the inability to properly communicate their emotional issues.

“In minority communities, financial burdens and the difficulty of accessing technology have added to their education-related stress in this lockdown period,” he said, adding that often parents are unable to catch differing personality traits in two siblings, thus increasing the chances of alienating one.

Substance abuse among parents and discord in family relationships also affect children. Now, Dr Boban said, the relief of going to school and sharing their problems with teachers and friends is also gone.