Despite Opposition, Hall of Nations at Pragati Maidan Demolished

Architects and museums from across the world had written to the government asking that the buildings be preserved for their architectural importance. 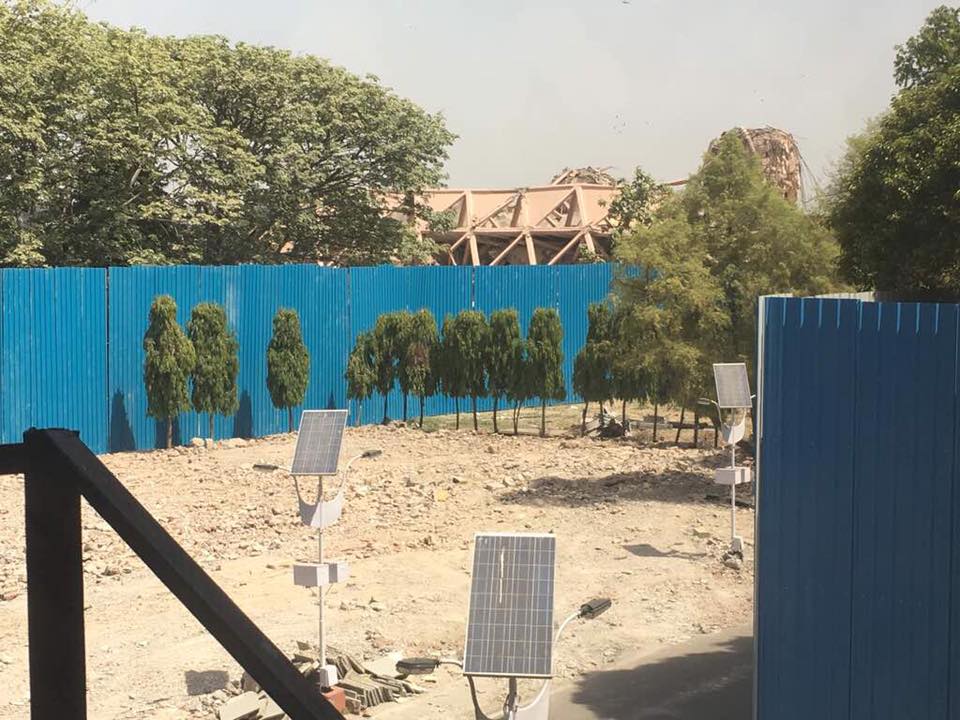 The demolished grounds where the Hall of Nations were. Courtesy: Facebook/Ram Rahman

New Delhi: The Hall of Industries and Hall of Nations buildings at Pragati Maidan, designed by architect Raj Rewal and engineer Mahendra Raj, were demolished on Sunday night.

The government had first announced its plans to redo the entire Pragati Maidan complex in November 2015, to replace is with a “state-of-the-art” exhibition ground. The first step of this process was the demolition of all non air-conditioned buildings.

Ever since the was plan was made public, architectural associations and museums from across the world, including the Centre Pompidou in Paris and the Museum of Modern Art in New York, have written to the government and Union commerce minister Nirmala Sitharaman asking that the buildings be preserved because of their architectural importance. INTACH included these buildings in their list of ‘modern heritage’ sites that should be conserved, but the government’s Heritage Committee ruled in February this year that modern heritage sites must be at least 60 years old (whereas these building were built in 1972 – falling 15 years short).

Rewal, along with others, filed a petition in the Delhi high court asking that a stay be put on the demolitions. Although the stay order was in place while the Heritage Committee deliberated, it was lifted once the committee submitted its definition of ‘modern heritage’. Just last week, on April 20, the court dismissed Rewal’s plea against the demolition.

In a statement issued on Monday, Rewal said he considered the demolition an “outrage”.

“The case was being considered in the Delhi high court and the hearings were scheduled on 27th April 2017 and 1st May 2017,” the statement says. “It may not be out of place to mention that the independent body of the Indian Institute of Architects and the Institute of Engineers had requested the authorities to preserve these buildings for posterity for their unique achievements. INTACH had pleaded in in their court case to do the same.”

“The Prime Minister of India, in a recent interview has said that he would like to rule India with “Niti” and “Nyaya”, roughly translated from Hindi means with values and justice. The Asian Institute of Architects, ARCASIA and the Union of International Architects, UIA had appealed to him for the preservation of these buildings. The curators of Museum of Modern Art in New York and Pompidou Centre, Paris have appraised him about the significance of these modern buildings. Thousands of architects both in India and abroad have pleaded the Prime Minister to save the building,” it continues. “In fact as an answer to our letter to the Prime Minister, the Ministry of Commerce indicated to us to find an amicable resolution with the Trade Fair Authority. But obviously somebody in the ITPO had other motives!”