Is it the End of the Road for London's Historic India Club?

The India Club has connections to many anti-colonial activists and was established by V.K. Krishna Menon, India’s first high commissioner to Britain. 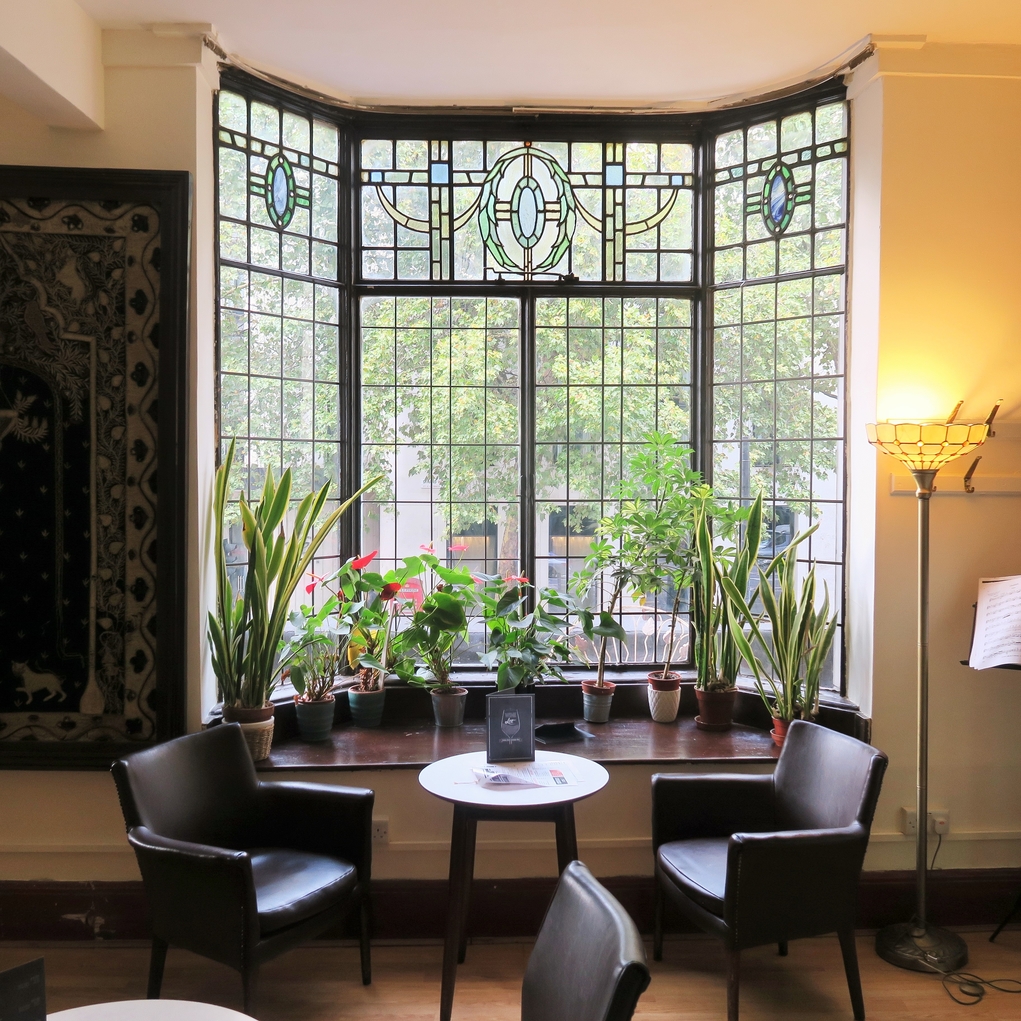 My introduction to Indian food came not by way of the luminous chicken tikka masala and ubiquitous lamb balti, loved across Britain despite (or perhaps because of) its lack of authenticity. Instead, after moving to live in central London as a child, I was regularly taken by my father to the curious and other-worldly India Club. The menu, a relic in the early-1990s and little changed today, introduced me to paper thin masala dosas, rasam in stainless steel katoris, peppery kheema mutter, and glasses of lassi and masala chai.

Little did I know at the time that this somewhat shabby restaurant was in fact a veritable institution – a place where the history ran far deeper than the archaic menu and ageing furniture. The faded portraits on the walls were intriguing and evocative. As a young boy, though, I was unaware how many of these key figures in the Indian independence movement had connections to the room in which I sat.

“The property was home to the single most important organization campaigning for India’s independence in the 1940s,” William Gould, professor of Indian History at the University of Leeds, explains: “It was a meeting place for some of the country’s leading Indian intellectuals, publicists, writers, and politicians. It is therefore of huge significance and importance to both the South Asian communities in the UK and to some of the key moments of British decolonization in the mid 20th century.”

But despite this importance, and the timeless feel to the India Club – with its Formica tables and faded décor – it is under a very urgent threat. Plans are afoot by the freeholder to substantially renovate the six-storey Edwardian building, which occupies an enviably central location, a short walk from Covent Garden, Trafalgar Square and the Houses of Parliament. 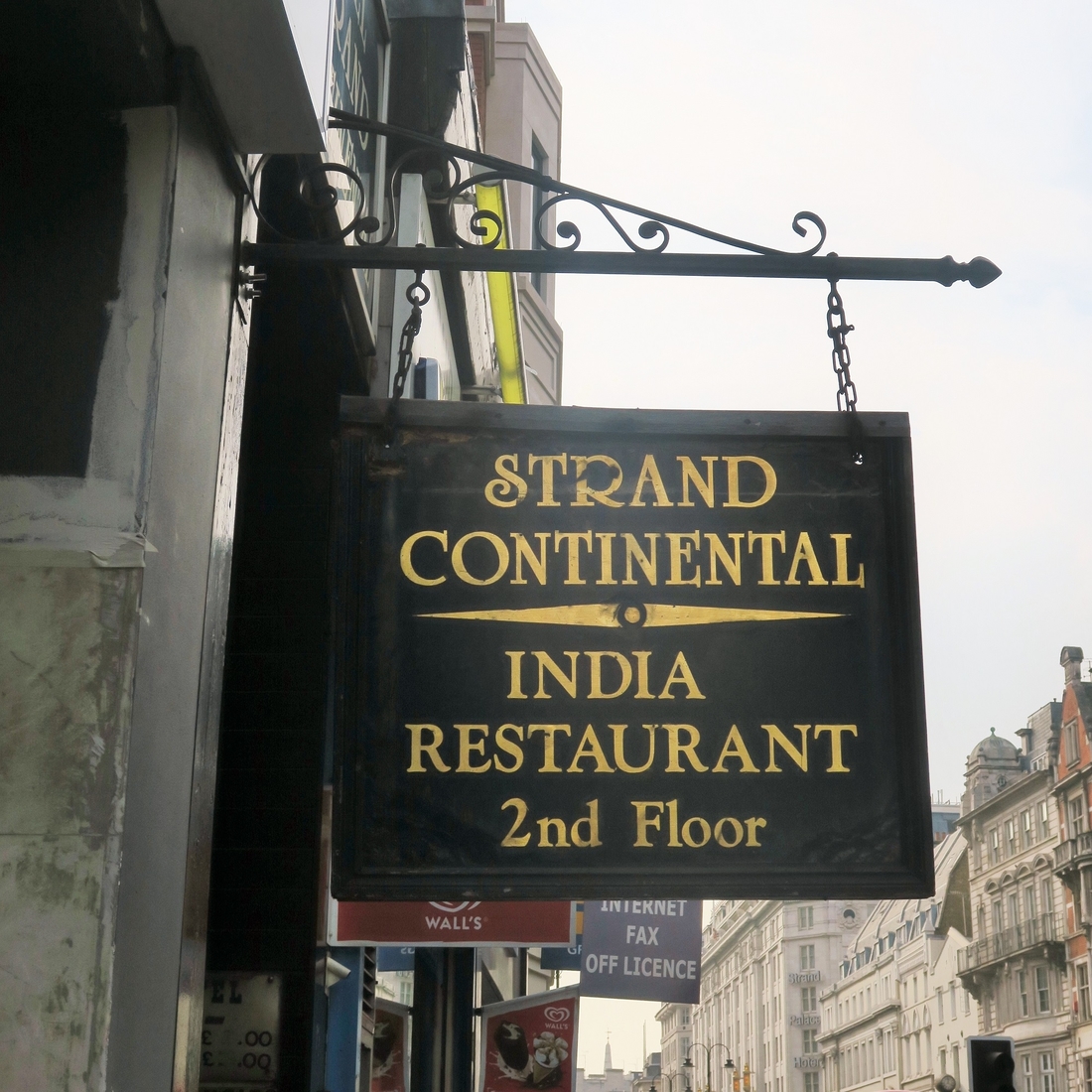 The Strand Continental Hotel, where the India Club is located, offers uncharacteristically frugal accommodation for its postcode. In anticipation of the lease expiring in 2019, Marston Properties, the owners of the building, submitted a planning application on September 8 for a total overhaul of its interiors. If it goes ahead, this would likely spell the end of the India Club.

A Parsi couple, Yadgar and Freny Marker, have been running the establishment since 1997. They ‘rescued’ it after, under the previous owners, it had started to go into liquidation. Explaining its current predicament, Yadgar told me: “I am very saddened. It is a crucial part of the joint heritage of the UK and India”. Safeguarding the material culture of the past requires, of course, much more than just inactivity. “We tried to preserve the internal features as they have been,” the proprietor added, “It still stands very much as it did in the days of the post-independence movement.” His petition to save the India Club, and reject the planning application, has garnered more than 6,000 signatures and myriad impassioned comments.

The efforts to rescue it from this fate are also centred around a campaign to grant the 19th century structure ‘listed building’ status. This is a designation conferred by Historic England, the public body charged with the protection of the country’s historic environment. It makes it considerably harder to make substantial alterations to the half-a-million buildings on the National Heritage List for England, which applies not only to edifices of intrinsic architectural importance, but also those of historic interest. Listing can safeguard both the interiors of buildings and the exterior structure itself. The application, prepared by Gould and the Markers, was submitted on September 29 and is now being considered by Historic England.

The Club, and the building in which it is located, were a site of pronounced importance in the period leading up to, and following, the transfer of power. The club was formed by one of newly independent India’s most substantial figures: the first high commissioner to the UK, V.K. Krishna Menon. Since the late-1920s he had been a driving force behind the India League, campaigning for independence and self-governance from numerous bases across Britain. The League – which often met in the building now home to the India Club – brought together prominent British anti-imperialists, including Annie Besant, Julius Silverman and Bertrand Russell, with Indian activists Jawaharlal Nehru, Aubrey Menen, P.N. Haksar, Rajani Palme-Dutt and numerous others. With a dual focus on influencing public opinion against colonialism and lobbying British parliament, their contribution to India’s eventual freedom was perhaps greater than that of any other group in Britain.

Menon, with the support of prominent journalist Chandran Tharoor, father of the politician Shashi Tharoor, formally established the India Club in 1951. Nehru and Edwina Mountbatten were among the first names on the list of members, and its lounge, bar and restaurant became a meeting place for Indian intellectuals, public figures, journalists, writers and civil servants. Its proximity to the Indian high commission – the grand Herbert Baker-designed building in the middle of Aldwych – also ensured a stream of patrons looking for a taste of home.

Shashi told me that the India Club “was something which in many ways I had grown up with – the lore of how my father, as a young student, had become close to the legendary Krishna Menon because of the involvement in this club.” The context from which it emerged was important: “It was founded at a time when Indians in England were quite unusual,” he notes, “When you saw another Indian in the street you would normally say ‘hello’ because there were so few of them. Which of course is not the case today!”

While the list of regulars these days may not be quite as star-studded, it remains a popular, almost ‘cult’, hangout. Its central location, in the immediate vicinity of King’s College London and the London School of Economics – amongst numerous other educational and cultural institutions – provides a steady flow of ‘members’. It is home also to the UK-based Indian Journalists’ Association, and a firm favourite of countless academics, writers and food critics. 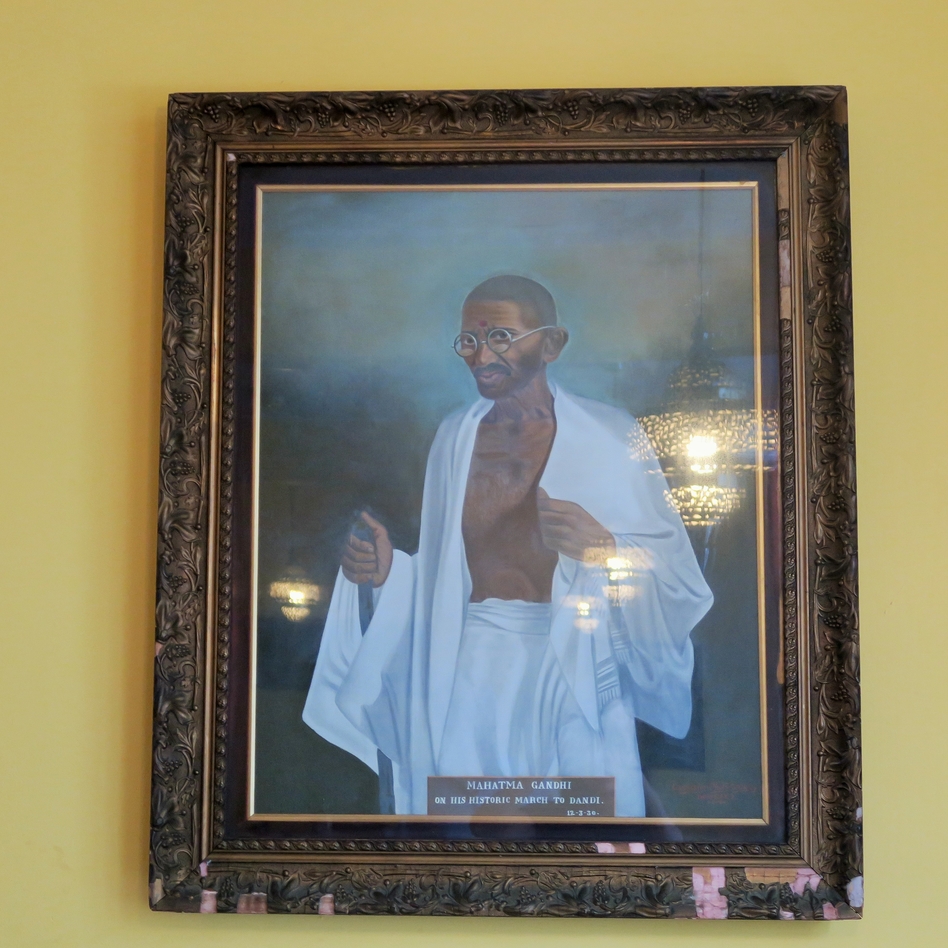 Raghu Karnad, author of the critically acclaimed Farthest Field: An Indian Story of the Second World War, remembers holding a post-book launch party there in 2015. When the India Club was suggested as a location, Karnad recalls Adnan Naseemullah, a political scientist at King’s India Institute, joking: “It might require a request in writing to the club president, in triplicate, with a covering recommendation from a joint secretary, External Affairs and from the ghost of Krishna Menon”. Fortunately, the red tape was circumvented. “The India Club was perfect,” Karnad told me, “the ambience could nearly have been WW2.”

The India Club is an anachronism in central London – not preserved as a museum piece for curious spectators, but a living and breathing place, albeit caught in a time-warp with legion admirers. The loyalty of its clientele is all the more striking in light of a ‘new wave’ of Indian restaurants across the capital: the hugely popular (but pastiche) faux-Irani chain Dishoom, the dhaba-style delights of Roti Chai, or the fine dining extravagance of Tamarind and Benaras. Perhaps, though, the India Club faithful are looking for something not on offer elsewhere: a place steeped in history, that nebulous notion of ‘authenticity’, simpler times.

London is brimming with sites of significance in the history of modern India. In Highgate’s India House, Shyamji Krishnavarma and V.D. Savarkar developed an overseas hub for radical, anti-colonial activism, and Lokmanya Tilak led a dynamic campaign for home rule from a house near Regent’s Park. Madan Lal Dhingra and Udham Singh were executed in Pentonville Prison for their assassinations of Curzon Wyllie and Michael O’Dwyer, and in the House of Commons, in 1892, Dadabhai Naoroji became the first Asian MP. Other historically important parts of London are within a stone’s throw of the India Club itself: B.R. Ambedkar studied at the London School of Economics in the early-1920s, and nearby, at the Inns of Court, Mahatma Gandhi, Nehru, Mohammed Ali Jinnah and Vallabhbhai Patel all undertook their legal training.

Although many people have some basic awareness of these overseas dimensions to modern Indian history, little is considered with much detail or nuance. On his recent tour of the US, Rahul Gandhi was mocked for referring to the Mahatma (who lived overseas for 24 years) and other Congress trailblazers as ‘NRIs’. The squabble underlined the complicated, contested, and often ill-informed relationship that many still have with India’s transnational or diasporic heritage.

But in recent years, there have also been some more concerted efforts to recognise and preserve – perhaps even stake a claim to – the historical, international connections of Indian leaders. Since 2015, a statue of Gandhi has stood in Parliament Square facing Winston Churchill – a man who infamously called Gandhi ‘a seditious Middle Temple lawyer, now posing as a fakir’. The same year Gandhi’s statue was erected, the Maharashtra government acquired the Camden house in which Ambedkar had lived as a student. Plans are now underway to preserve the property for visitors and scholars. 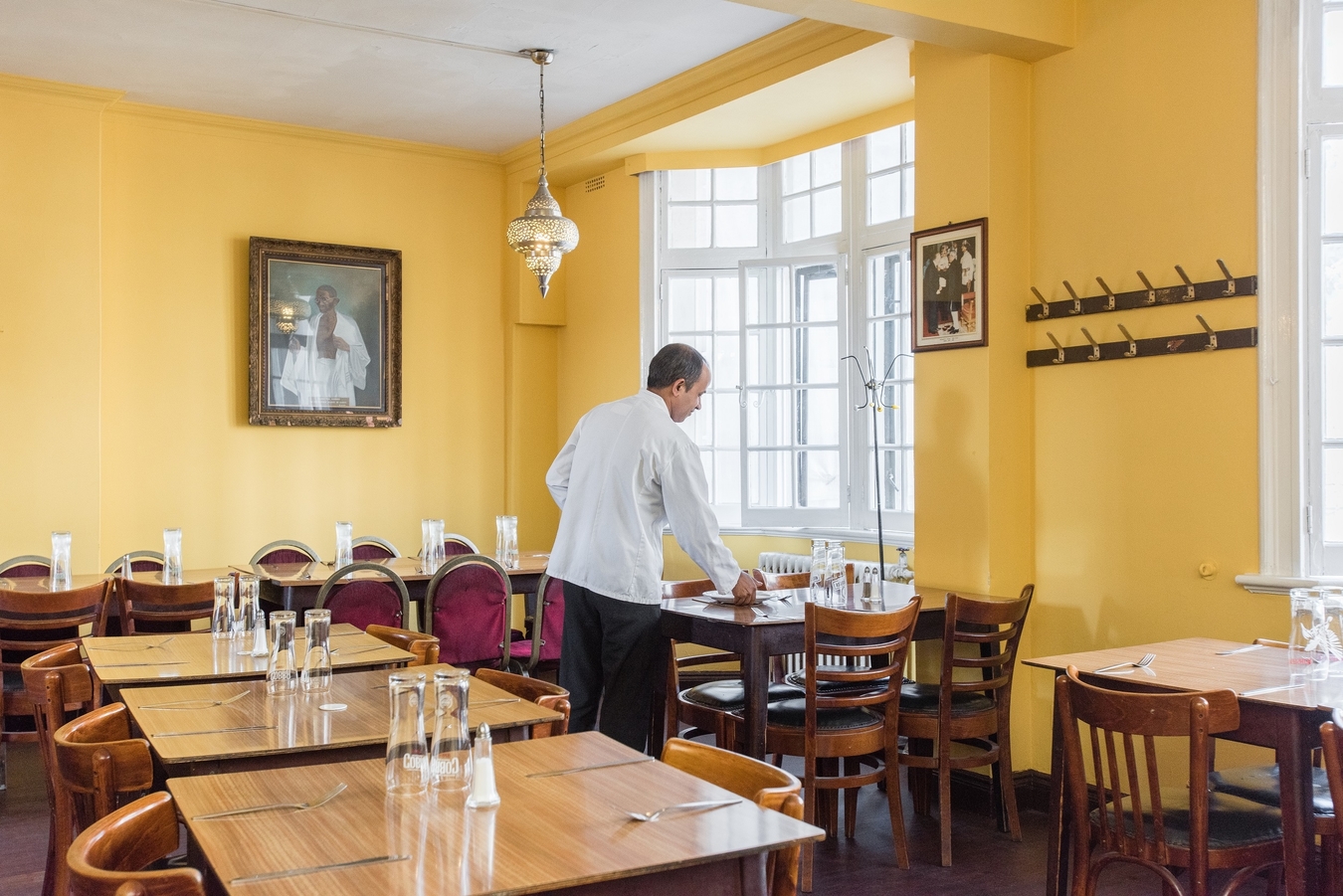 A waiter at the India restaurant at India Club. Courtesy: India Club

The India Club is of special importance for Indians in Britain, who number around 1.5 million. Shashi argues that Indians overseas are “disconnected” and lacking “a sufficient consciousness of the pioneers who have gone before in the lands of diaspora”, although “younger generations are beginning to feel the need to know more than just their lives or those of their ancestors in India.”

The Club, although first and foremost an operational canteen and bar, shares a feature in common with museums and monuments: it serves as physical reminder of the past, a bridge between cultures. Restaurants are frequently overlooked for their significance as meeting places – sites of social, professional, cultural, and political encounter. Far beyond their manifest purpose, to provide things to eat and drink, they must be understood and commemorated for the myriad human interactions that they are host to, quotidian and historic.

With the India Club facing closure, a material connection to the freedom struggle is under threat. It would be a great tragedy if the 70th year of Indian independence was marked by the disappearance of an institution of such historic bilateral significance. And the dosas would definitely be sorely missed by all!

Edward Anderson is the Smuts Research Fellow in Commonwealth Studies at the Centre of South Asian Studies, University of Cambridge. His Twitter handle is @edanderson101