Many attempts have been made to modernise the Mahalaya, but Bengalis still retain their love for the first one recorded for Akashvani in 1932. 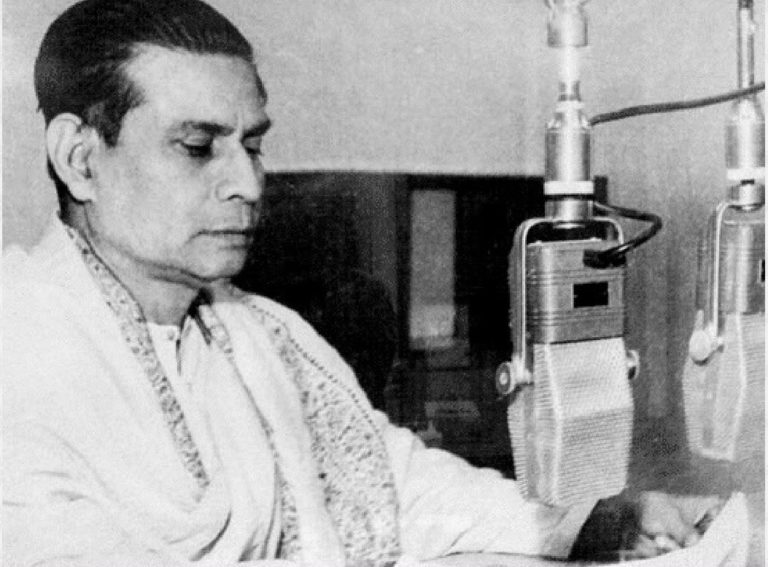 Birendra Krishna Bhadra at the All India Radio studio in Calcutta. Credit: Wikimedia

It is the rarest of the rare; a radio programme on an operatic scale to usher in the staging of the world’s largest installation art show on streets, in parks, in community halls and in homes that began in 1932 and after 83 years remains the defining sound scape to declare the start of Devi Paksha and the Durga Puja for all Bengalis everywhere. The Akashvani (All India Radio) version of the Devi Mahatmya or Chandi Path, verses to the Glory of the Goddess, that wafts out of homes across West Bengal before day break every year is a serendipitous combination of the ancient and the modern, of orchestra, chorus and Sanskrit chants, declamation in easy to follow Bengali and of course Rabindrasangeet is probably the longest running such programme for radio anywhere in the world.

Remakes of the story of Mahishasura Mardini, or the “Mahalaya” programme as it is popularly and universally known to all Bengalis, have bombed with the audience and the Bengali remains hungry for the original opera on radio, for age cannot wither nor custom stale its infinite appeal. The men who made it – Birendra Krishna Bhadra, Bani Kumar, Pankaj Mallick, Jogesh Basu, Raichand Boral – were all radio artistes, some more famous than others. In combination, they have become legendary.

The two hour and 15 minutes long Mahalaya programme is now and perhaps forever associated with the voice of Birendra Krishna Bhadra, whose ‘Ya Devi’ enters the soul and releases the spirit of frenetic celebration engulfing every inhabitant of Kolkata which is transformed for the period of the Pujas into a vast carnival space. Programme Director Nripendranath Majumdar, now almost forgotten, was the man who made it all happen.

When television tried to recreate the magic with the evergreen showman of Bengali cinema, Uttam Kumar, trying his best to outdo Birendra Krishna Bhadra, the programme failed. Out of curiosity people watched, but most turned on the radio to imbibe the ineffable that was captured by Bhadra and his partners in creation. As they do now, eight decades later, listening to it while they contemplate the day to come.

The original programme was “the outcome of the most productive adda” according to Jawhar Sircar, a Bengali and CEO of Prasar Bharati; it was meant to boost the popularity of radio and of course rake in the cash, as every radio came with a licence and a steep fee.

As always, there was controversy around the programme. The time of the programme – at 4 a.m. — was hotly debated as conservatives felt the broadcast should begin only after Devi Paksha began in the morning, rather than before Pitri Paksha formally ended with the annual obeisance to the spirit of the ancestors (all men) at dawn. Today, the programme continues to be broadcast from four in the morning, for which millions of Bengalis set their alarms and wake up to re-invent the spirit of Durga Puja celebrations. For several years after it began in 1932, the programme was broadcast on the sixth day of the Devi Paksha, rather than on first. The orthodox disapproved the chanting of the Chandi Path by the non Brahmin Birendra Krishna Bhadra. Their disapproval was dumped by popular approval.

The story of the music that accompanies the chants, the songs and the declamations ought to figure in secular folklore. The musicians were of all faiths. While the Hindus guessed more or less accurately when to blow the conch shells and bang the cymbals to add an authentic touch, the up country violinists were apparently unable to tell the difference between Sanskrit and Bengali and so played on, deviating from the score. As the programme settled into place as the harbinger of the Durga Puja season, the minor glitches were ironed out.

The Mahalaya programme was a live performance till 1966 and those who participated and those who helped to produce it retain the fondest memories of waking up soon after midnight, getting dressed in dhotis and white saris with red borders, being picked up and then plunging into a performance that stirred them and the soul of Bengal. There was enough incense and flowers to make the occasion believably real. There was only one year when it was not broadcast live during the first three decades; that was in 1946, when Kolkata was made unsafe by the unprecedented scale of communal violence. After 1966, it is a recorded programme that goes on air and galvanises the Bengali into celebration.

It is astonishing that repetition has not staled its infinite appeal. After Akashvani inexplicably sold the copyright, Mahishasura Mardini has been released on tape, on CD and is now available on YouTube and other websites. It was on the approved list of music that was played at traffic signals in 2011, when Mamata Banerjee swept into power in West Bengal. It acquired political significance that it has succeeded in casting off, because the victory of Mamata Banerjee was, in the overactive imagination of many, the triumph of Shakti or the feminine spirit over the ungodliness of the Marxists.

It is the most commonly heard music blaring from crackling loudspeakers at the thousands of puja pandals at appropriate and inappropriate times. It is at once street music and transcendental sound, because every Bengali ear tunes in every time it is played. It has figured in political theatre with Mamata Banerjee inaugurating Pujas in Kolkata with her incorrect chants, only because it is so popular. And, of course, it has figured in cinema and serial, in mostly symbolic ways as the triumph of hope over despair, good over evil. Devi Mahatmya as rendered by Birendra Krishna and his associates has endured intact over time. Akashvani has changed its signature tune, other programmes like Vividh Bharati have dropped off the list, but not the Mahalaya programme. This is what makes it so special. It is both fresh and familiar, a combination that makes it timeless.