In Bengaluru, Dry Waste Is a Source of Both Livelihood and Civic Woes

Over the years, waste management is a civic issue that has taken on an increasing sense of urgency in the city. 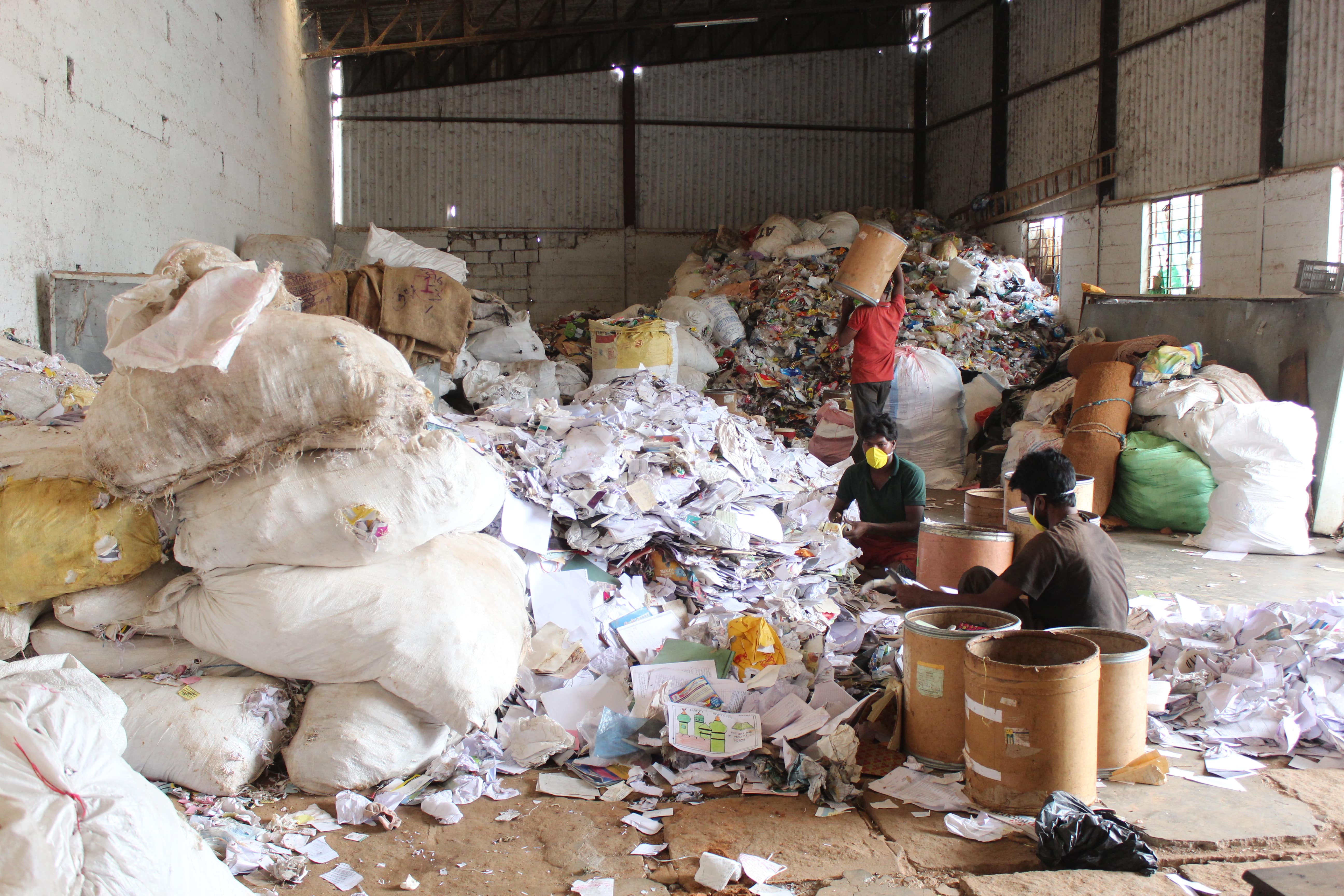 The interior of the dry waste collection centre in Shettihalli, Bengaluru. 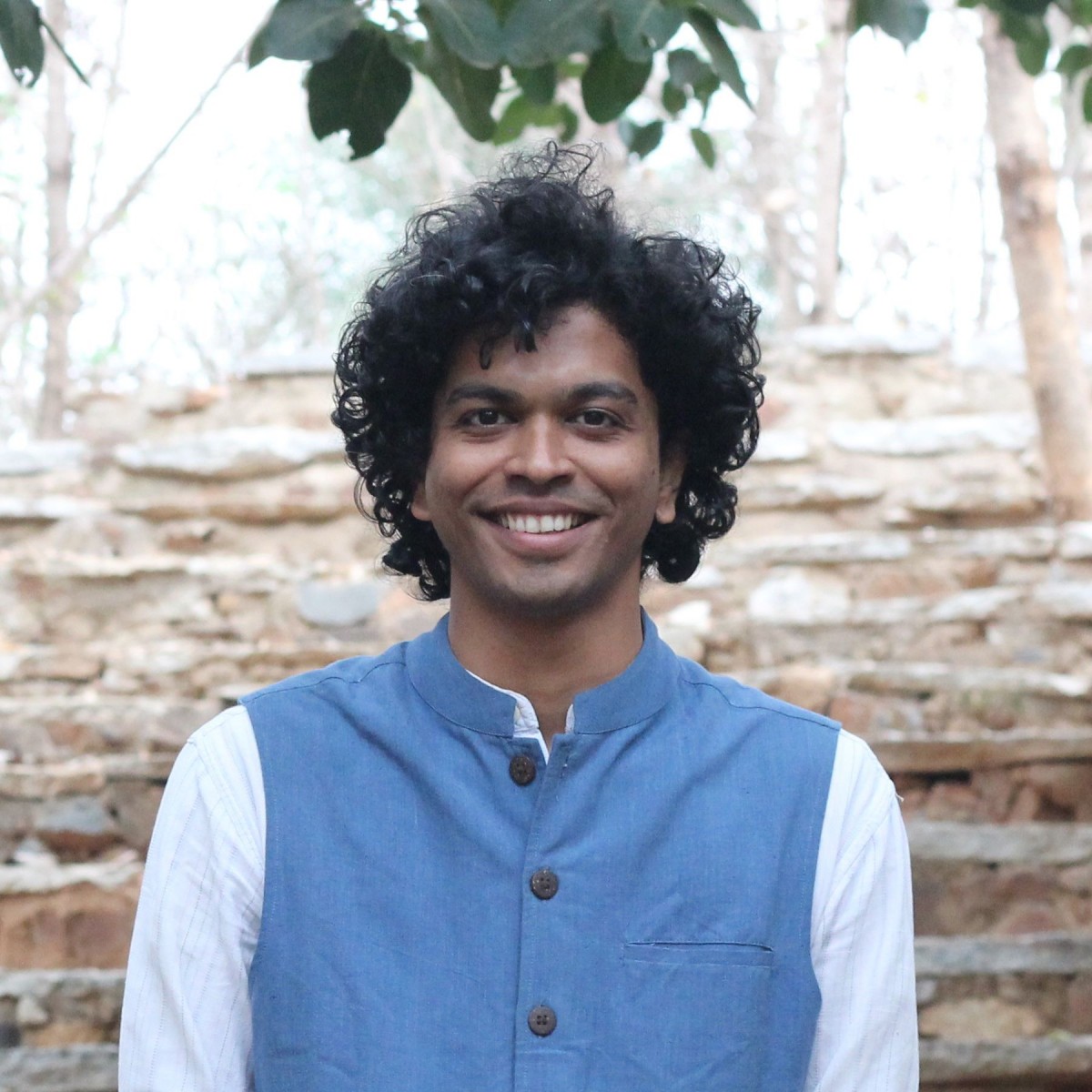 Prajwal Suvarna
Environment
Society
Urban
05/May/2018
Amjad Pasha doesn’t fit the conventional image of a waste worker. Slightly built, dressed in a shiny brown shirt with longish hair that falls into his eyes when he speaks, Pasha looks the part of the bashful entrepreneur and small businessman that he is. Today, Pasha runs a Dry Waste Collection Centre (DWCC) in Ward No 167 of Jayanagar in Bengaluru, but it wasn’t so long ago that he worked odd jobs and gigs, hustling a living on the streets. 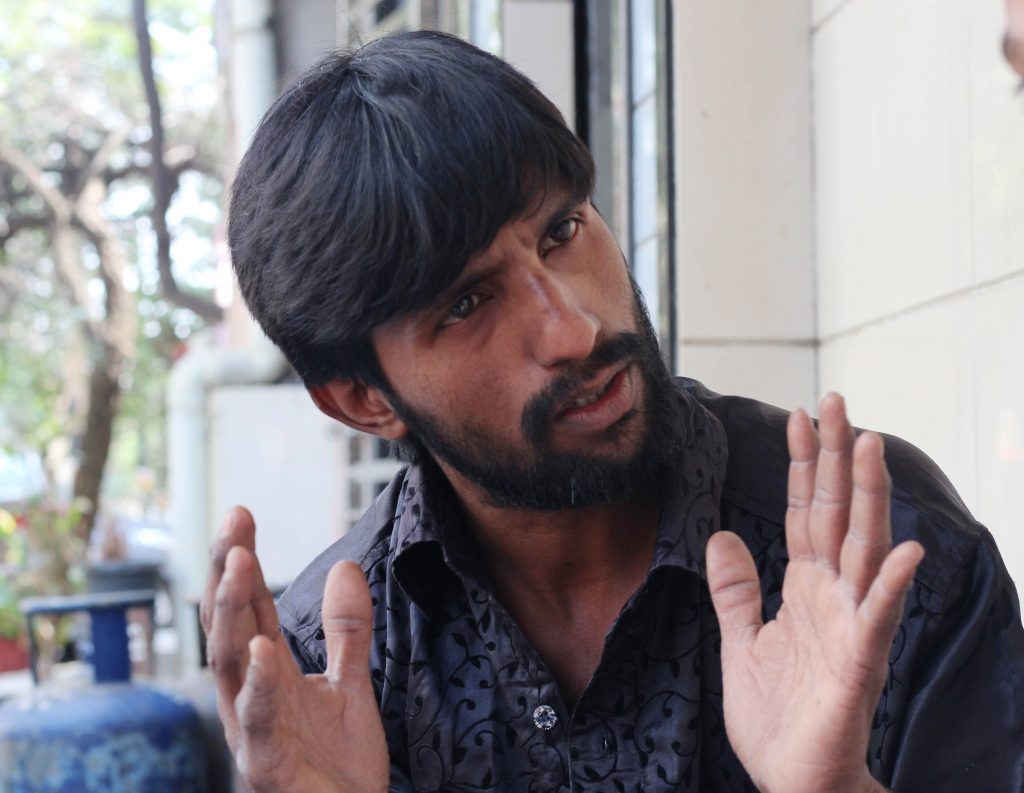 Thirty-six-year old Pasha is just one of a 35,000 strong force of waste workers in Bengaluru, an informal network that works to recycle dry waste – solid materials like paper, plastic and glass that don’t decay – and prevent the city from drowning in the vast amount of garbage, close to 5,000 tonnes, that it generates on a daily basis.

The DWCC he runs in Jayanagar provides employment to five other people, who are paid an average of Rs 500 to 600 per day, along with two meals and tea. “The money they earn, they take home,” Pasha says.

The centre itself – two rooms with barely enough space to stand when filled with trash – is neat and well-run; sacks filled with ‘chip’: industry parlance for dry coconut shells, points to a predominantly South Indian neighbourhood as well an efficient government waste segregation programme. The same can’t be said of the newer suburbs of the city, which the local government, whether in the form of a well-run DWCC or segregation programme, often fails to reach homes.

It isn’t news that Bengaluru has a garbage problem. Over the past few years, in a city that has witnessed near-apocalyptic scenes of a lake on fire and fish washing up dead on the shores of other water bodies, managing trash has taken on an increasing sense of urgency. There have been a number of awareness programmes stressing on segregating waste. Most citizen action and media attention, however, tends to focus on the disposal of ‘wet waste’ – organic refuse that can be degraded by microorganisms.

This is understandable given the high organic component of the waste – an article published by the Indian Institute of Science (IISc) pegs it at 60%. An equally crucial problem, though, is the 25% of this garbage that is recyclable, but makes its way to landfills on the outskirts of the city, where it rapidly loses value. The difficult task of extracting it is left to the waste worker. 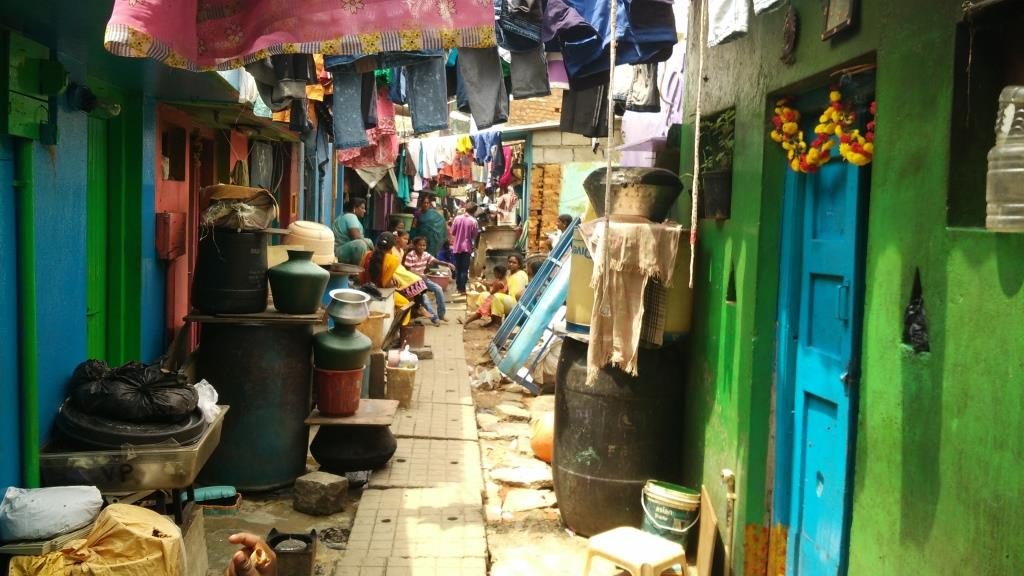 The narrow lanes of Jolly Mohalla in Bengaluru, where Pasha sends most of the plastic waste after sorting.

The problem is not unique to Bengaluru. Every major Indian city, including metropolises like New Delhi, Chennai and Mumbai currently depend on landfills to dispose their waste. It is estimated that only 12% of the waste generated in Indian cities is scientifically disposed.

In November last year, the Bruhat Bengaluru Mahanagara Palike (BBMP) released a ‘Solid Waste Management Manual’, a comprehensive document on its efforts to tackle this crisis. On paper, a well-thought out plan exists to manage waste in Bengaluru. In practice, however, things tend to be a little different, with the BBMP notching up an erratic record when it comes to dealing with the various stakeholders of the waste management system in the city.

For instance, the local government body has an embarrassing history of irregular payments to the pourakarmikas or municipal workers, who are responsible for lifting litter and keeping streets clean. It was only in February this year, after a directive by the Karnataka high court, that the BBMP gave an assurance of paying arrears and transferring the salaries, both on its rolls and under contract, directly to their bank accounts.

Of all the people who are part of the system, perhaps the worst off were the waste workers. With no official employment, absent from any sort of payroll, they were largely left to fend for themselves. Despite the stigma attached to their work in India, waste workers are estimated to save 14% of the annual municipal budget and reduce the carbon footprint of our cities, by salvaging and recycling materials from unsegregated trash 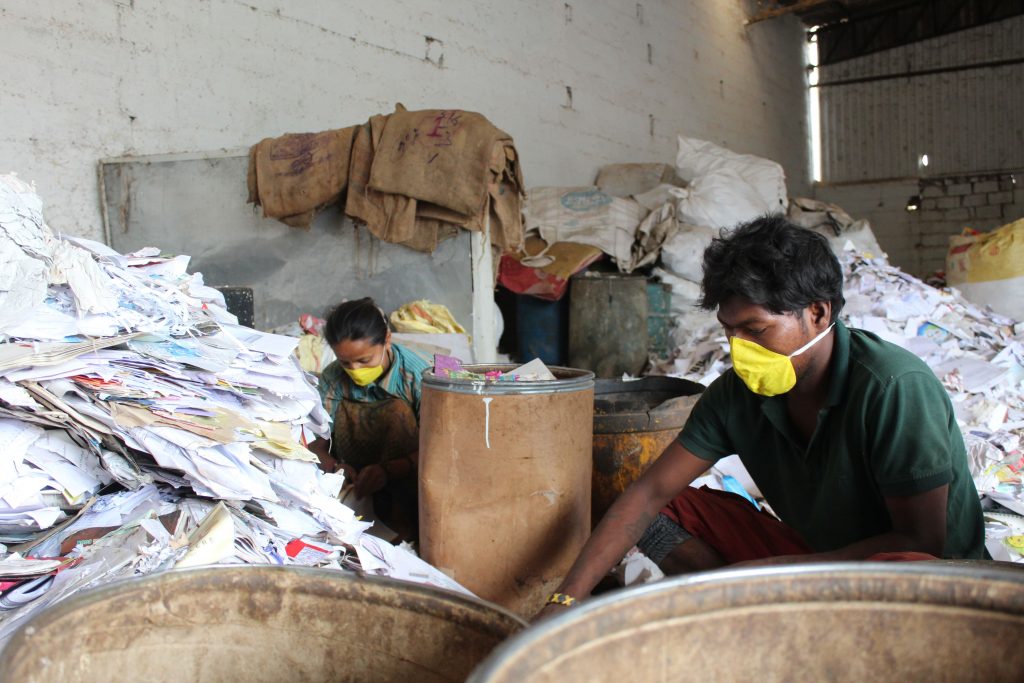 Dry waste segregation underway at a DWCC in Ward No 12, Shettihalli, Bengaluru.

The concerted efforts of citizens like Nalini Shekar, the founder of Hasirudala, an organisation that advocates the rights of Bengaluru’s waste workers, has slowly led things to change. Hasirudala’s lobbying led the BBMP to provide them with identity cards, a process that began in 2011, granting them a modicum of official recognition. The efforts of activists around the country had also led the Ministry of Environment and Forests, through the Solid Waste Management Rules of 2016, to direct local government bodies to absorb waste workers from the informal sector.

In June 2017, the BBMP became the first local government body in India to take steps in this regard, when it signed a MoU with 40 waste workers, authorising them to run the DWCCs in the city. Earlier, they ran the DWCCs with the help of organisations like Hasirudala, which filled in the vacuum of government action. These organisations have now taken on a role of mentorship and act as intermediaries between the workers and the government officials. 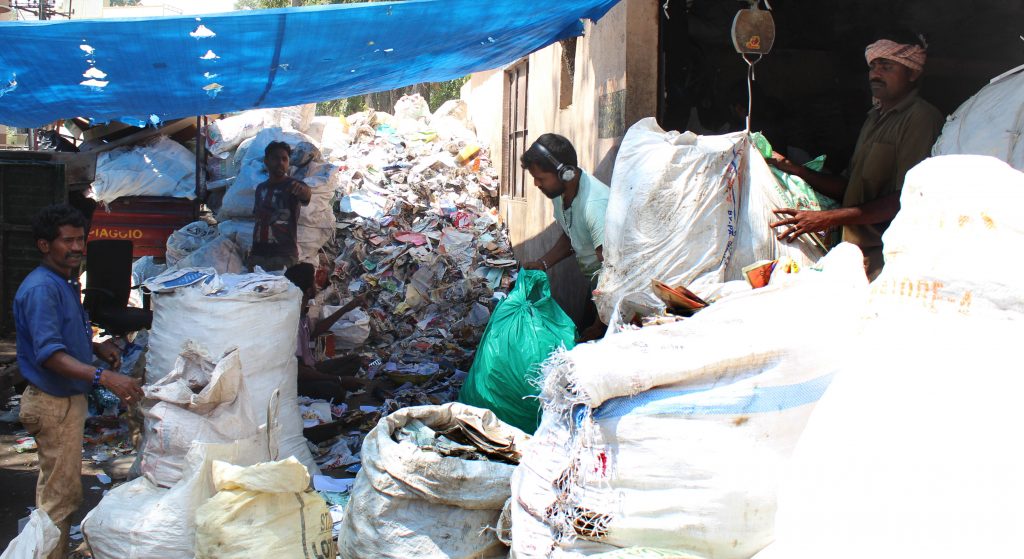 Under a decentralised system, the BBMP envisions a DWCC for each of the 198 wards in Bengaluru, to deal exclusively with dry waste. It claims that 166 of these centres are operational already, contributing to the segregation of trash that does take place in the city. Even so, the system is far from perfect.

The waste workers running the DWCCs receive no financial assistance from the government, and are offered minimum institutional support. The smooth running of the centres also depends on the cooperation of the pourakarmikas and the efficacy of the mandatory waste segregation programme, not to mention the exigencies that come with running any small business in the city: shortage of labour, managing overhead costs and dealing with government red tape.

In the absence of social security benefits for waste workers in the public sector, Hasirudala’s continuing efforts to empower them by linking up with the government and other social organisations has benefitted hundreds of people like Pasha.

The going is good for Pasha, but there is occasional trouble: Murmurs from the BBMP about “outsourcing” the management of its trash, including dry waste recycling; there is also some resentment from the pourakarmikas, who every DWCC operator perforce has to work with. 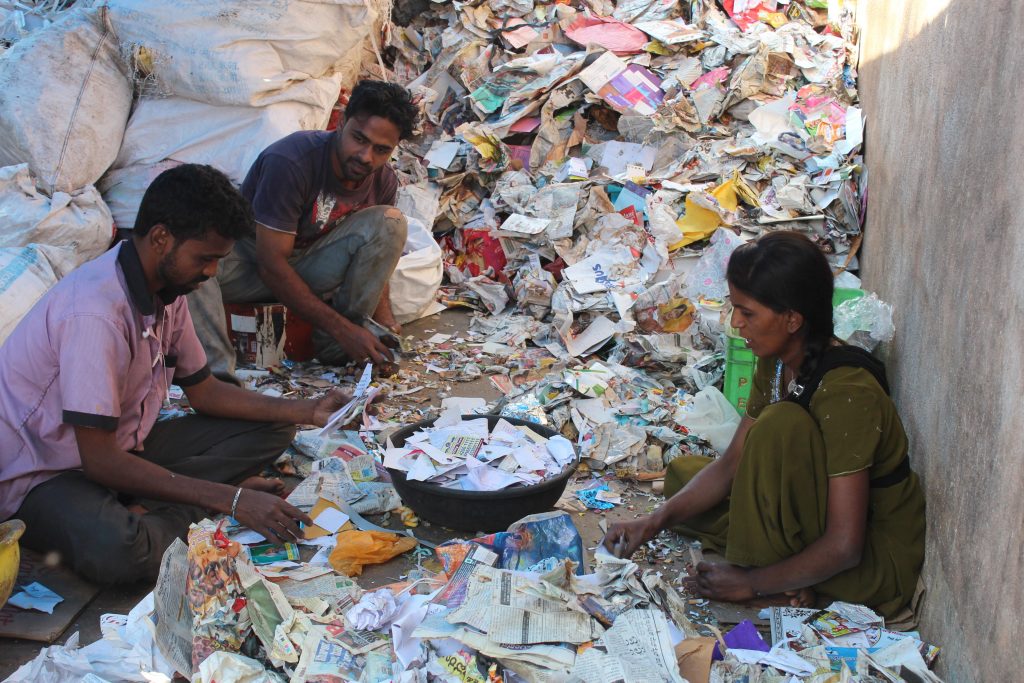 Waste segregation underway at the DWCC in Jayanagar.

In the absence of regular payments by the BBMP, many municipal workers see recycling as a lucrative gig and pick up the dry waste destined for the DWCC, earning a little money on the side. This creates a problem, as the expenses of running a centre – paying for the workers and vehicles out on the collection run – can only be met if the trash is brought back and it has some value. “We tell the pourakarmikas, “‘Don’t pick the dry waste. If you want to pick the waste and are willing to do it cleanly, you can run the centre’”  Pasha says unperturbedly.

His story proves that, done right, a well-established system of waste segregation not only helps the city, it also gives men and women like Pasha a decent livelihood and dignity.

Prajwal Suvarna is a communications professional working in the development sector. He works for Rang De, a not-for-profit based out of Bengaluru.