Drug cartels succeed in slipping through a much larger amount than what is seized. This indicates India has transitioned into a key narcotics destination. 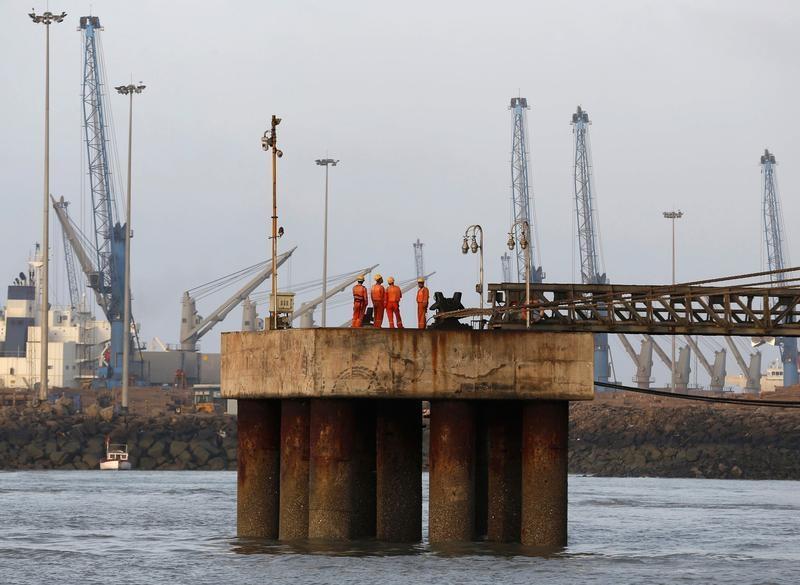 Workers wait for a cargo ship to beach at Mundra Port in Gujarat April 2, 2014. The rising volume in drug trafficking implies that our coasts remain vulnerable to the possibility of narco-terrorism attacks. Credit: Reuters/Amit Dave

On September 14, along the coast of Gujarat in Indian waters, law enforcement authorities – the anti-terrorist squad (ATS) and the Indian Coast Guard (ICG) – apprehended a fishing boat carrying 40 kilograms of heroin worth Rs 200 crore. The crew consisted of six Pakistani nationals.

The boat was seized in the waters near Jakhau harbour in the Kutch district. Sandwiched between the major drug production regions and located in one of the busiest maritime traffic regions of the world with perhaps the highest density of fishing vessels in its territorial waters, India is most vulnerable to the menace of narcotics trafficking. Expedited by a change from using individual air couriers to smuggling by sea, narcotics trafficking has increased substantially since 2019.

Even without including the narcotics smuggled from the other border routes, the extensive Gujarat coastline along the Arabian Sea singly appears to have become the preferred route of traffickers. Just this year, law enforcement authorities seized more than 1,300 kg of heroin worth Rs 6,800 crore in various operations carried out in Gujarat, Delhi and Kolkata. The number of similar seizures by authorities in recent times is staggering.

With a street value of almost Rs 5 crore for a kilogram, even a few smuggled packets hold tremendous value for drug runners.

On July 12, in a joint operation, the Punjab Police and the Gujarat ATS seized nearly 75 kg of ‘high quality’ heroin from a container at the Mundra port in the Kutch district. Billed as carrying textiles, the container, which originated from Dubai, was ‘only one-third filled’ and was kept near a container freight station of the Mundra port complex.

The largest consignment of drugs in the country was also intercepted in Mundra in September 2021. Law enforcement authorities were astonished at the size of the contraband in the three containers shipped from Bandar Abbas port in Iran to Mundra. Aside from the billed semi-processed talc stones, nearly three metric tonnes of heroin or 2,988.21 kg worth more than Rs 21,000 crore in the international market were seized from the containers.

It is disquieting that only a year after that massive drug consignment, another shipment has been seized at Mundra.

Earlier in April this year, the ATS, in a joint operation with the Directorate of Revenue Intelligence (DRI), had seized 260 kg of heroin at Kandla port.

Even a cursory glance at the list of interceptions in the past few years indicates that India’s northwest coast along the Gulf of Kutch has become particularly vulnerable to the drug cartels using the Arabian Sea route for narcotics smuggling. Encompassing over a 1,000-km long shoreline, the Gulf of Kutch is a shallow water body with a depth extending from 60 metres at the mouth to less than 20 metres at the head. Replete with a complex of islands, fringing reefs backed by mudflats, coral islands and coastal mangrove forests, the Kutch coastline provides uncongested shallow banks for disturbance-free, illicit narcotics trafficking.

Facilitated by the easy smuggling route, small manufacturing units processing heroin are mushrooming across the state. Last month in an operation led by the Mumbai Police, 513 kg of mephedrone worth Rs 1,026 crore was seized from a manufacturing unit in Gujarat’s Ankleshwar.

In 2020, when one of the biggest Indian drugs Mafiosi, Simranjit Singh Sandhu, was arrested, it was revealed that his gang was using the sea route, landing the contraband on the Mandvi coast and transporting the consignment by road. Mandvi is a centuries-old trade port and capital of the Kutch region. The Sandhu gang had also been using Asia’s largest market in spices, Unjha, located in north Gujarat, to camouflage the drug packages hidden under bags of spices. They set up illicit drug manufacturing factories in the outskirts of Amritsar, Punjab, where crude heroin, bought at low rates, was processed into high-grade white powder for European and Indian markets. Like the recent one on September 14, most of the seizures involve Pakistani nationals, believed to be enjoying the patronage of security agencies, who bring consignments up to a point about 150 nautical miles from Mandvi, from where it is picked up by locals and brought up to the coast in small boats.

Last year in April, the ICG and ATS had arrested eight Pakistani nationals on board a fishing boat with heroin worth about Rs 150 crore off Jakhau in Indian waters.

In March 2021, the ICG seized a boat in the Arabian Sea which was carrying a cache of 301 kg of heroin, five AK-47s and 1,000 rounds of ammunition. The National Investigation Agency was roped in by the Union government to conduct preliminary investigation into the seizure which revealed that the international drug syndicate involved in the smuggling was based out of Pakistan.

This year alone, the Gujarat ATS has seized 717.3 kg of drugs with a market value of approximately Rs 3,586 crore in total. Along with the contraband, 16 Pakistani nationals and three Afghan nationals were also apprehended.

Also read: Five Drugs That Changed the World (And What Went Wrong)

These frequent, large narcotics seizures are indicative of a substantial increase in sea-based drug trafficking from the northwest coast of India. This is problematic for India on several fronts. First, in all likelihood, drug cartels succeed in slipping through a much larger amount than what is seized by the authorities. Second, while traditionally infamous for being a transit nation, the increasingly massive amounts of drugs entering the country indicate that India has transitioned into a key narcotics destination.

The UN Office on Drugs and Crime’s World Drug Report 2022 released in June has said, “India is one of the world’s single largest opiate markets in terms of users and would likely be vulnerable to increased supply, as there are already signs that an intensification of trafficking in opiates originating in Afghanistan may be taking place eastwards.” While Punjab and Himachal Pradesh are leading in India’s epidemic of opioid users, Gujarat is now the third worst state in terms of drug overdose deaths.

Addressing the National Conference on Drug Trafficking and National Security on July 30, home minister Amit Shah acknowledged that drug smuggling is a big challenge for national security and announced that the Union government was effectively pursuing a decisive “war against drugs”, especially plaguing the northern states.

The rising volume of drug trafficking implies that Indian coasts remain vulnerable to the possibility of narco-terrorism attacks. India’s seaborne trade constitutes 95% of its external trade by volume and 70% by value, and the country’s energy security depends upon these maritime lifelines. Only alert coordinated preparedness of law enforcement and a push for intensified international cooperation by intelligence agencies will be able to check the flow of narcotics into the country.