Award-winning photojournalist Sudharak Olwe travelled in Maharashtra to document the life and struggles of the Pardhis – once considered a 'criminal' tribe – and found they were still trying to shed the tag off.

Young Pardhis can be seen riding down dusty landscape on their cows. For them these cows are sacred and help them earn their livelihood through hunting small birds. Credit: Sudharak Olwe 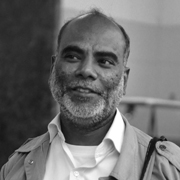 Maharashtra: Dust rises as the hooves of an approaching cow make a clip-clop, clip-clop sound on the dry ground in rural Maharashtra. Riding on the cow’s back down this dusty landscape is Chingya Bhonsale, 70, followed by his sons and nephews on the backs of their respective cows.

Cows are sacred animals for these men who are out on a hunting trip. They are after a species of bird named chittar. The men whistle, emulating the call of the chittar. The unsuspecting birds flock around the men, and the men in turn entrap the birds in a locally designed trap.

They sell these birds in the local market.

These men belong to the Pardhi tribe, literally meaning ‘hunters’. The Pardhis claim their roots to the hinterlands of the central Indian jungles that date back hundreds of years. They were once considered the children of the forests, but their identity took a beating  when they, along with around 150 other tribes, were branded as a ‘criminal tribe’ by the British colonial government in 1871 for rebelling against the regime. For eighty years thereafter, they were were booked under the Criminal Tribes Act and were and segregated and forced to live in camps outside the village limits, facing extreme poverty, displacement and discrimination. Aher Vahegao was the home to 14 Pardhi families, surrounded by lush green fields. In an attempt to oust the Pardhis, the villagers burnt their houses down to ashes. Now they live in open farmlands. Credit: Sudharak Olwe

The Act was finally repealed in 1952, and they were denotified; while the rest of India celebrates its independence on August 15, these denotified tribes consider August 31 as their day of independence. But living as they are on the margins of society, the denotification has meant little for these communities. The ‘criminal’ tag refuses to go away, making their integration in the society quite precarious.

They continue to face socio-economic deprivation, and there has been little systematic or political will to address the their concerns. There have been talks about setting up a permanent constitutional commission to carry out focused work for the welfare of the community, but no concrete policy to address their issues is in sight yet. The Pardhis are often deprived of basic amenities such as water and electricity. Credit: Sudharak Olwe

Their plight has exacerbated thanks to the government’s ban on hunting as part of its conservation plans. A direct casualty of the ban is the Pardhis – the hunting tribe – for whom forest is home and means of livelihood. Driven out of forests, where for centuries they lived in peace with the wild, they are compelled to adjust in a new environment. With the ever-increasing divide of man and jungle, their ancient model of sustainability has been trumped by exploitation of India’s forests and resources.

Away from the forests, and without proper transition or rehabilitation, the Pardhis have had to give up their life as nomads and settle down in locations that are strange to them. But that is not easy either, given their identity as a former ‘criminal’ tribe. They are driven away from villages, often violently. The violence is usually rationalised by false allegations ranging from minor theft to premeditated murder. 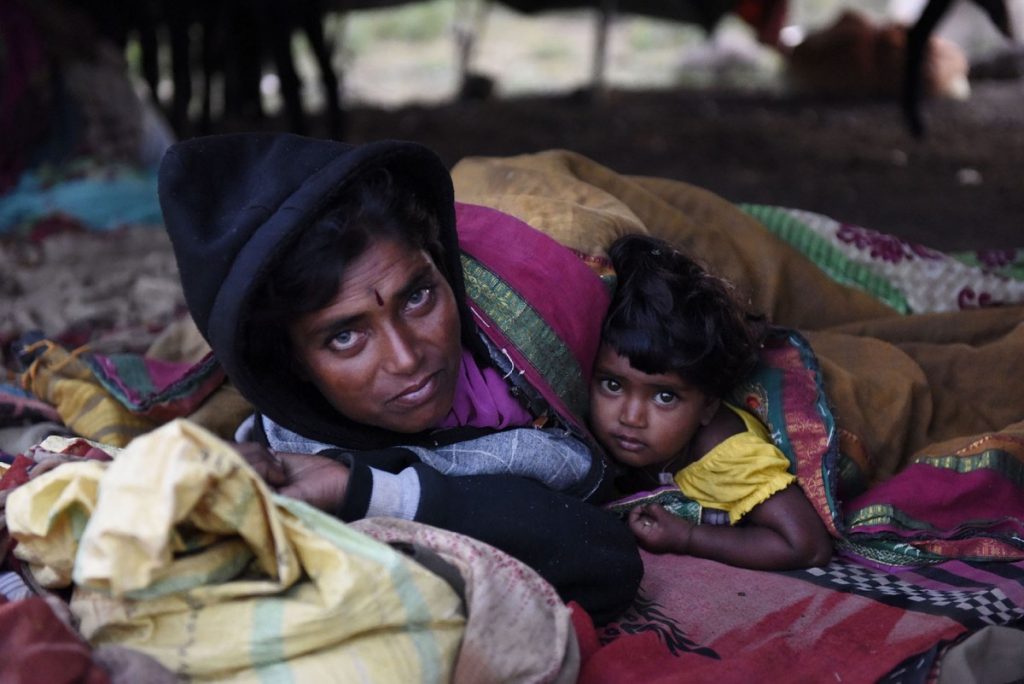 Forced to live under temporary bamboo and tin huts or even under open sky, many Pardhis lack even proper blankets to cover themselves during cold nights. Credit: Sudharak Olwe

Sukanya Pawar, a resident of the Georai tehsil in Beed district, became homeless when her house was captured and burned down by the villagers alleging that she or her family members had committed a robbery. Her husband was eventually arrested, and she and her family now live at a bus stand.

Sukanya’s story is not unique; there are hundreds of Pardhis like her who have been falsely accused of a crime and are facing the consequences. They travel in small- to mid-sized groups carrying with them essential items of daily needs – cattle, goats, hens and plastic sheets on bamboo poles to make their temporary homes. With almost no access to food security, water, and healthcare, the tribe is in a precarious situation, risking malnutrition and disease. 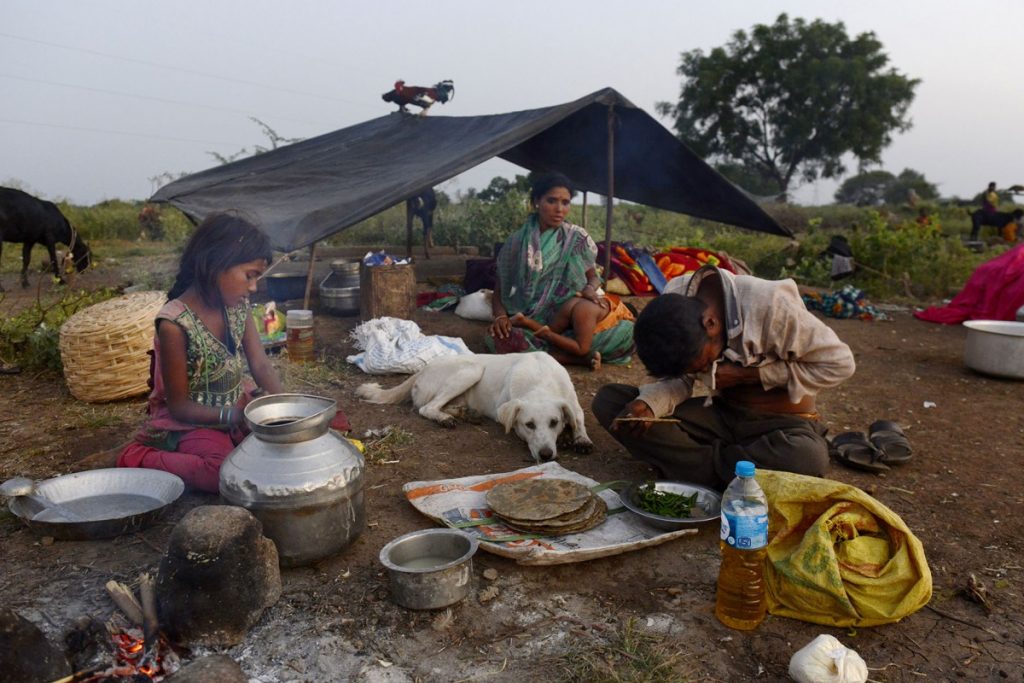 The economic conditions of the Pardhis is so miserable that they often have to skip meals. Credit: Sudharak Olwe

Savita Dibiya Bhonsale and her husband, residents of Shelgaon village, had just finished building their new house on a loan when their entire village was burnt down by miscreants. Unable to face the misery, Savita took poison, which damaged her legs. She says she now has no money to get them treated. Because of the loss, her husband faced mental issues and gave in to alcohol.

But not all Pardhis succumb to their fates. Noor Khaas Bhosale fought a long battle to make sure that those who had ransacked her settlement were punished. She filed an atrocity case against the upper-caste villagers, leading to arrest and incarceration of 156 perpetrators. Her resolve to fight her perpetrators is the outcome of her own struggle with the police. Ten years ago, her husband was taken away by the local police on a false robbery case. The police allegedly beat him up and she never saw him again. The case was listed as a suicide and Noor received four acres of land as compensation. Because of their backwardness, it is not uncommon to see married Pardhis with kids as young as 16 year olds. Credit: Sudharak Olwe

Another major obstacle the Pardhis have to deal with is the local police. Their ‘criminal’ legacy makes them an easy target and often a scapegoat whenever a crime takes place. They are picked up regularly, often on false charges. One of their members, Gauri, was picked by the policy on theft charges. She was taken to a hotel and allegedly assaulted and raped for over a week. Then she was transferred from one police station to another, where she was subjected to more torture. Gauri was released on a bail of Rs 4 lakh and never filed a complaint against her assailants.

The legacy of their criminal past has stayed on with them, and with a cruel twist of fate. In a vicious circle of hate that breeds more hate, the men in the community unleash their frustration on their women, beating them up for not cooking food for the family when there is no food available to cook in the first place.

The Pardhis rarely have money on them throughout the year, but when they do, they spend it on religious ceremonies like Dev Dev. The ceremony is performed by the family headman. It takes place under a colorful tent under which headman sings and dances in a trance to embody the goddess. They sacrifice a bokda (goat) and offer the goat’s head to the god, and the headman drinks the blood of the goat. Dev Dev is performed to request god to take their hardships away. With a single goat costing as much as Rs 15,000 to 18,000, and with additional expenses on tent, decorations and music systems, the expenses of the festival reach as high as Rs 2 lakh. Dev Dev is a Pardhi religious ceremony performed by the headman of the family clad in colorful clothes. Credit: Sudharak Olwe

Nomadic life and lack of social connections means that most of the Pardhis cannot vote – since they have no addresses and identity proofs. This makes their existence non-essential in the political scenario of rural India. Their lack of awareness about their own rights as citizens of this country has also meant that the Pardhis have been left way behind in terms of basic education and social upliftment. Women are often at the receiving end of the frustration of Pardhi men. Credit: Sudharak Olwe

During the time we spent with the tribe, in large, open grasslands, watching them cook, take care of their cattle and struggling to make ends meet, we realised that they have limited life choices and no safety net to fall back on. The life of the Pardhis is significant reminder that the struggles of humanity are not yet over.

To tweak an old proverb, when the axe came for the ancient trees, not just the roots but the tribes wept too.

Sudharak Olwe has documented heart-rending stories and issues from around India since 1988. He was conferred the Padma Shri, India’s 4th Highest Civilian Award, by the President of India in 2016.