Across India, Muslims have been as engaged in operations to help people worst affected by the crisis as anyone else. As India soldiers through its lockdown amid the COVID-19 crisis, it is clear that the devastation it has wrought on lives and livelihoods is unprecedented in living memory.

From living on the fringes of society to now struggling for survival, the lived reality of millions of Indians today is one of deprivation and desperation. Dominating the narrative is also a vile and hateful worldview that seeks to find opportunity in a humanitarian catastrophe, and reflects a willingness to advance a “nationalist” agenda, albeit at the cost of the nation.

Thankfully, the story of COVID-19 in India does not begin with deprivation and end in hate. An integral aspect of our collective situation today is that tragedy has engendered resolve, and for some noble souls, countering hate is an exercise in demonstrating love and compassion.

Initiatives across the country to provide relief to the most vulnerable segment of society reflect how civil society can make a difference even in the face of government inefficacy and ineptitude. Especially heartening is the work of organisations that are working to provide succour to all, regardless of religious or caste identities.

Now serving over 25,000 meals a day to the poor and destitute across the metropolitan city and far-flung suburbs, it all started with Mohamedy coming across a daily wage worker from the slums who had not eaten for two days. This led to her cooking food for 150 people in the vicinity of her home near Crawford Market.

The sheer extent of the need and Mohamedy’s passion for relieving hunger saw many more people join and contribute to the effort with their time and money. Today, the organisation has one main kitchen serving 15,000 meals a day and several “satellite kitchens” across the city serving an additional 10,000 to 15,000 people.

Volunteers, donors and beneficiaries come from every religious community and every sect. “This is about recognising the fact that we are all children of Adam and Eve, and feeding those brothers and sisters who are hungry and deprived is fundamental to expressing our humanity, ” says Mohamedy.

“For me, personally, this work is also an expression of my identity as a Muslim. Widespread prejudice against Muslims cannot be allowed to get in the way of serving all who are impacted by this crisis regardless of their religious identify or social status,” she adds.

Helping Hand Foundation, a nationwide NGO operating in the health sector is another organisation that has pivoted towards awareness campaigns and emergency assistance in the wake of the COVID-19 crisis.

A dedicated team of 100 volunteers including several ambulance drivers, nurses, paramedics, counsellors and patient care givers are working on a daily basis to reach out to areas where food and medical attention are urgently needed. This is in addition to awareness campaigns on social distancing and hygiene, in government hospitals as well as in slums, along with the efforts it takes in educating the masses on ways to safeguard their health at this time.

“We have been engaged in the mission to serve our fellow citizens even before COVID-19. The magnitude of the challenge facing our country and the sheer plight of those in need has only strengthened our resolve to do more,” says Mujtaba Askari, the organisation’s founder and trustee who is based in Hyderabad.

“As for the demonisation of Muslims, the antidote to hate can never be hate. It is love and compassion,” Askari adds. 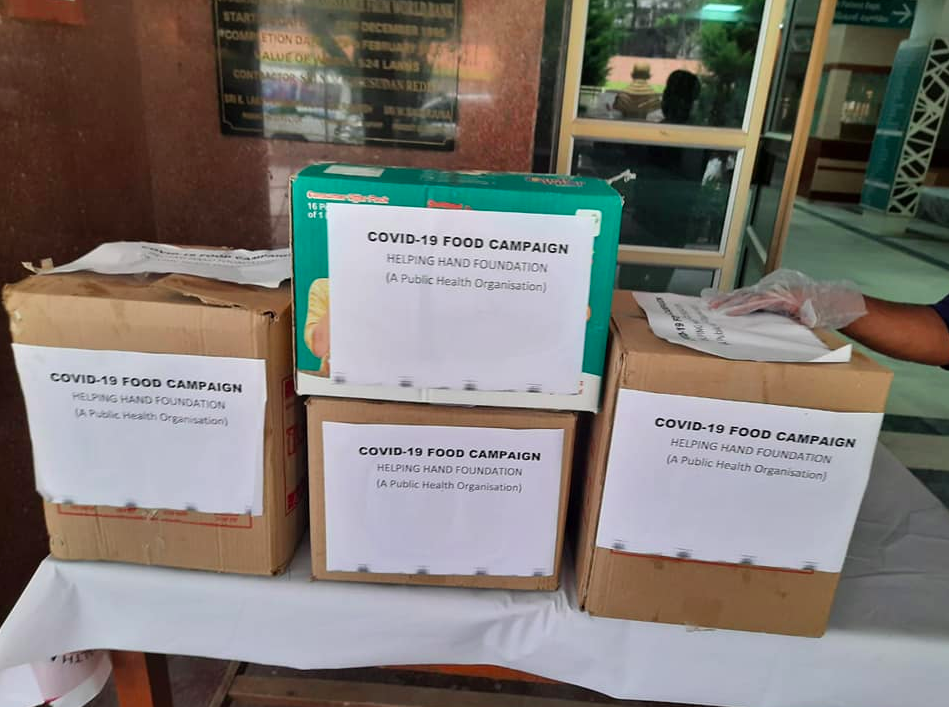 Food packets to be distributed by the Helping Hand Foundation. Photo: Facebook

The phenomenon of individuals and organisations transcending religious differences to serve all is not limited to Muslims.

In Mumbai, a Bengali Welfare Association has reallocated the funds meant for Durga Puja celebrations towards COVID-19 relief efforts. From Gurdwaras to Buddhist monasteries hundreds of houses of worship of practically every religious community have recognised the existential nature of the crisis facing the country and the world, and have risen to the occasion by welcoming everyone who needs help.

The point of highlighting Muslims doing the same is not to take anything away from the magnanimity of these laudable efforts. In the current climate, however, of unending vitriol being poured on Muslims by some public figures and media outlets, there is something especially uplifting about so many Indian Muslims rising above anger and bitterness to stay focused on providing relief to fellow citizens.

Also read: It Was Naive to Expect They Would Forget Their Hatred Towards Muslims in a Crisis

Not only are Muslim-led efforts in various states working towards relief a common phenomenon, established nationwide organisations of Indian Muslims such as the Jamaat-e-Islami Hind (JIH) have a long track record of being in the forefront of relief efforts in the face of natural calamities. Their grassroots-based nationwide network is now being effectively leveraged to provide relief to Indians of every creed and caste, which the organisation plans to continue until the lockdown is in place.

Undoubtedly, the struggle to save India’s soul will be long and hard, and things will likely get worse before they get better.

However, it is the acts of kindness that so many people of every religious community are willing to extend to each other that keeps the hope alive for millions of Indians.

These acts already represent a triumph of pluralism over bigotry, and of compassion over cruelty.

Musaddique Thange is a project management professional based in the US. He has served as a board member of the Indian American Muslim Council and has been engaged in social services in San Diego, California for the last 10 years.