ASHA workers, auxiliary nurses and midwives and anganwadi workers are bearing the double and direct burden of both COVID-19 related responsibilities and their regular maternal and childcare duties.

As the COVID-19 pandemic and its associated challenges keep unfolding in front of our very eyes, it becomes increasingly apparent that the endemic, i.e., the entrenched socio-economic problems extant in most parts of India, gets exacerbated during the period. Therefore, what we are encountering is not just a bio-medical pandemic, but a pandemic of extreme poverty, unemployment, food insecurity and healthcare deprivation.

In this context of the suffocating synergy between the ‘normal times’ and the ‘crisis times’, this article examines the contribution of the ‘unsung’ frontline health and childcare workers, namely, Accredited Social Health Activist (ASHA), Auxiliary Nurse and Midwife (ANM), and Anganwadi Worker (AWW), who seem to be bearing the double and direct burden of both COVID-related responsibilities and their regular maternal and childcare duties.

In one of its recently convened online discussions, the Pratichi Research Team got an opportunity to listen to the challenge-fraught yet high-spirited voices of a large group of frontline healthcare workers from different districts of West Bengal, including ASHAs, ANMs, AWWs, and district-level health counsellors.

The first-person account of the vicissitude of their life as ‘essential’ healthcare providers in this pandemic and of their resolve to face the myriad challenges frontally, yielded a key question: how to ‘centre’ the role and contribution of this hyperactive frontline at a time when many other essential services of both the state and the market are either disrupted or completely suspended.

Despite the private sector being the dominant player in the healthcare sector in India, it was intriguing to see that it did not emerge as the custodian of people’s health during a pandemic. Instead, the state had to take up the central role in steering the country through these troubled times. However, within the apparatus of the ‘grand’ state, the contributions of the frontline health and childcare workers have remained unsung.

They are, routinely and intriguingly, both controlled and neglected by the centres of authority, with usual policy indifference that the ‘core’ harbours for the ‘periphery’ in a hierarchical institutional structure. Since they are treated within the policy circle as workers receiving some honorarium, some describe them as the ‘state without honour’. Yet, during these times of crisis, they are the face of the state.

Making the ‘state’ visible in the eye of the masses

Many caregivers spoke about their heightened level of activity during both the ‘lockdown’ and subsequent ‘unlock’ periods, requiring them to work for 15 to 16 hours a day. Although their routine tasks of mother and childcare got disrupted during the early months of the national lockdown, in many districts of West Bengal, they are the ones, in contrast to many other government employees, who have resumed their services soon after, especially those related to child immunisation and maternal care, devising a number of innovative ways permissible under these restrictive circumstances.

To clear the backlog in these respects, they have begun offering essential services thrice a week instead of the earlier schedule of once or twice, attending to the children and the mothers in small batches of ten, positioned at safe distances from each other. Mothers seem to have overcome their initial apprehensions about revisiting the primary health centres, ‘as they have faith in us’, observed one ASHA staff. 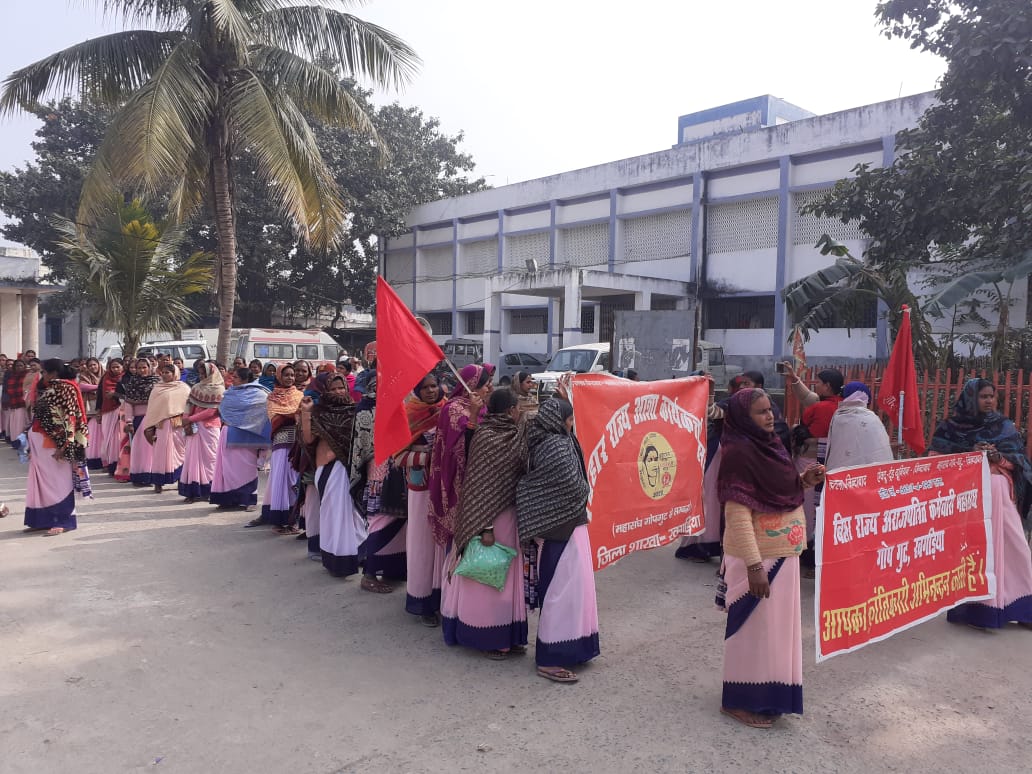 However, the supply of essential kits like the haemoglobin test kit and iron tablets is yet to be regularised, they said. Despite their efforts to keep up the level of institutional deliveries in government hospitals, there has been a clear decline in the same during this perilous season. Quite a few deliveries have taken place at private nursing homes, as some of the doctors of government hospitals have nudged, even intimidated, their patients to turn towards their private clinics through a ‘revolving door’, causing the frontline staff to lose the meagre incentive that they get for deliveries in government hospitals.

The equipment for their own protection – masks, sanitizer, and gloves etc. – were in short supply initially, their stock picking up a bit later on. And yet, they have continued their door-to-door visits in their neighbourhoods, tracing the spread of the virus, checking on the health status of the patients, suggesting feasible quarantine measures for them, and delivering important public health messages about the corona virus – the so-called ‘social vaccine’ – at the doorstep of the rural populace. Some of these rural health workers have been occasionally transported to city airports for thermal screening and health check-ups of travellers.

When many of us had locked ourselves up safely in our houses, Anganwadi workers went out to distribute the dry ration to their students and their families at regular intervals. They also stayed in touch with their supervisors and ASHA colleagues despite the centres being shut by the higher authorities. No doubt, at these troubled times it is these women working at the grassroots level who have made the otherwise “missing” state visible in the eye of the masses.

Lack of benefits for contract workers

From a labour protection point of view, it is important to scrutinise what employment securities are made available, especially, to second ANMs, who are contract employees.

A few caregiver participants pointed out that it is the second ANMs who have been primarily shouldering the responsibilities pertaining to the handling of migration-induced contagion in the state. Their personal protection, incentives, transportation facilities, and resting opportunities are insufficient; their choices are few, but their market-like insecurities are abundant.

It is, therefore, important to probe the government’s treatment of its contract employees, especially during a public health emergency.

Seeing through the lens of gender

These women health workers conducted meetings with local communities before the arrival of the migrants to sensitise them about their role and cooperation in dealing with the imminent challenges. They also had meetings with the migrant workers to assist them through the process of home quarantine, offer counselling and support in case they contracted the disease, and shift them when necessary to block-level quarantine centres.

On a few occasions, when an entire village and its residents were socially ostracised by the locals because of this contagion, pushing them into starvation, women health workers approached the concerned block development officers and sought their intervention to ameliorate the situation. This enlarged their role in the public sphere, and required them to interact with migrant workers, police personnel, civic volunteers, and mostly men, which has been a source of challenge and even harassment for some of these women caregivers, as their accounts revealed.

At times, the migrant workers at the quarantine centres would show their wrath to these women due to poor services offered at the quarantine centres. Therefore, it is worth probing whether any seeds of transformation in the gendered power structure at the community level are visible due to their increased interaction with the people in the public domain.

Also read: On the Legal Front, How Prepared Is India for the Next Public Health Emergency?

On asking what keeps them at their very demanding and risky job, despite the economic hardship and the extra work, the participants gave the audience an inkling of their motivation that transcends economics – they seem to value their work for its social relevance and its professional quality.

They indeed underlined the need for their professional development. They said, “We are community health workers, assigned to carry out a number of outreach activities. However, we are now allotted many additional ‘indoor’ duties at government-run ‘safe homes’. We are supposed to assist trained doctors in providing these services, but on the ground we are the ones who end up handling these tasks directly, for example, of giving oxygen to the patients when needed, even though we are not professionally trained to do so.”

“We love our work. These are times of tribulations, we often sacrifice the needs of our own families, find it painful not to be able to be with our own children, yet we feel obliged to stand by our fellow human beings.”

Therefore, it is time to centre the role of the frontline community heathcare workers by enhancing justice in India’s healthcare structure.