The state’s rural development and panchayats department has issued a notification through which it has asked village panchayats to withdraw panchayat funds for the purpose of feeding the needy. However, money is yet to flow. 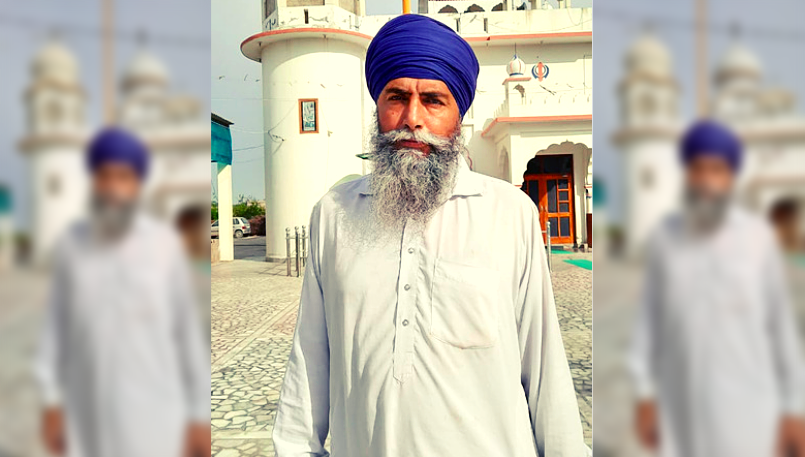 Sukhdev Singh, who funds milk for the children of the poor landless farmers in Khunde Halal. Photo: Prabhjit Singh

Muktsar, Punjab: A Sikh priest has begun providing 25 litres of milk every day for children of landless farm labourers at Khunde Halal, in Punjab’s Muktsar district, days after he lost his wife in a fire accident in.

The village’s gurdwara is under the care of Sukhdev Singh, whose wife had struggled for life at a medical college hospital in Faridkot for a month before she succumbed to 80% burns that she had sustained after a leaked gas cylinder led to a fire in her house. She died on March 17.

But the death, said Sukhdev, made him stronger in his commitment to society. “It is our duty to help the needy when children are hungry in this severe crisis. There are 25-30 families with not a single penny in this village,” Sukhdev told The Wire.

On March 31, Sukhdev quietly performed the ‘bhog’ ritual by reciting ‘ardaas’ as a tribute to his wife at the Gurdwara with 6-7 village men attending the prayer.

Sukhdev said he had already asked his relatives not to throng the village for his wife’s ritual, with the COVID-19 lockdown in mind. “It (the gathering) hardly matters in such circumstances when people are dying all over, and it is our duty to abide by the lockdown norms,” he said.

At faraway Barnala, a dairy owner Sandeep Singh has been supplying 70 litres of milk, half a litre each, to 140 poor families in the labour colony of Barnala city. “City dwellers are not as connected with daily wage labourers. Villagers are,” he said.

In Chandigarh, Indra Kaur of a working middle class family, cooks 100 chapatis every day and delivers the same to an NGO, the Guru Nanak Chartable Trust, to be distributed to the daily wage labourers with no work and money.

In the face of many such stories, the Punjab government has seemingly shifted the onus of feeding the rural poor on the village panchayats in this agrarian state.

The state’s rural development and panchayats department has issued a notification through which it has asked village panchayats all over the state to withdraw the panchayat funds for the purpose of feeding the needy. 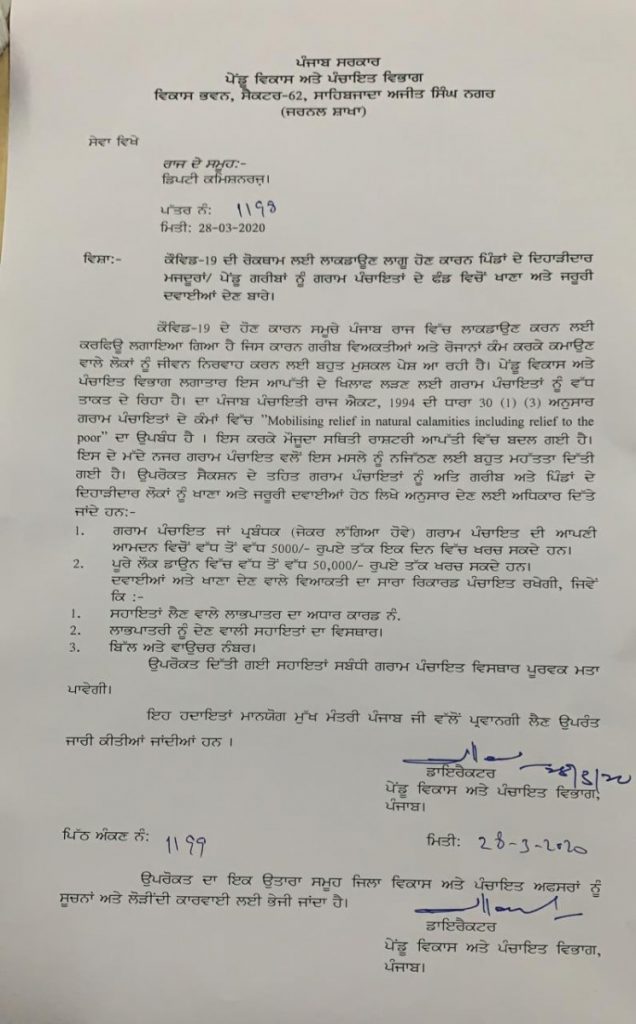 The notification specifically cited Clause 30 (1) (3) of the Punjab Panchayati Raj Act, 1994, that empowers panchayats for “mobilising relief in natural calamities including relief to the poor”.

The notification sent to over 13,000 village panchayats across the state stated:

“The panchayats can withdraw a maximum of Rs 50,000 during the entire period of the lockdown, with a limit of Rs 5,000 on daily basis from the accounts of their own (panachayat’s) income.”

“No help has so far come from the district administration, and whatever little we could do is through our own resources, with the help of big ‘zamindars’,” said Khunde Halal village sarpanch Hansa Singh.

“I have already submitted a list of 200 poor families in need of ration, to the local block and development panchayat officer,” he added.

There are more than 50 families from the landless peasant community who are now entirely dependent on others’ kindness, a village volunteer Tarsem Singh, of the Punjab Khet Mazdoor Union, told The Wire.

Punjab’s rural development and panchayats director D.P.S. Kharbanda confirmed the notification issued on March 28. He however brushed aside a direct query on how much funds his department had so far received from the state exchequer for the village panchayats to help out the needy rural populace.

Tarsem and his team in Khunde Halal set out every morning to list the needy, collect money and ration from the well-off farmers and other sources, and give it to them.

No helping hand has been extended by the district administration headquartered at Muktsar, some 22 kms away from the village.