In Bengal, a New Lease of Life for Jamai Sashti

Just as Ma Shashthi once revived a baby, the Bengal government recently revived an old festival that lands on June 19 this year, the centrepiece of which is a grand meal and the 'jamai', or the son-in-law.

Every jamai (son-in-law) has his day and his Bengali manifestation is no exception. Come a particular day in mid-June earmarked as Jamai Sashti, and the public space in Bengal is full of rather awkward looking men of varying ages, dressed a little better than the ordinary, trudging a bit sheepishly towards their in-laws’ place. Their faces say, ‘Don’t laugh, I am going on a call of duty. There is nothing, well almost nothing, in it for me.’

There, at the in-law’s place, a little ritual awaits the jamai. Once he is settled, the mother-in-law comes with a thali in hand on which rest durba (twin blades of grass), grains and five fruits. She blesses the jamai with the grains, puts an auspicious phota (mark) on his forehead with curd and maybe ties a yellow thread around his wrist.

With this ritual, the less important part of the whole event is out of the way and the family sits down to the important task of sharing a meal with the jamai being the centre of attraction. His plate is surrounded by little katoris (bowls) full of different delicacies, vegetarian and non-vegetarian, and the jamai has to perform the supremely important task of the day – eat as much as he can. The whole ritual underlines what is at the centre of all Bengali rituals and celebrations – a grand meal.

Our daughter told us long before she got married that the whole thing stank and she was going to have none of it if and when a jamai came into our midst. In today’s age of gender neutrality, young women who are all well-educated and almost invariably with a job, cannot bear to have a social custom woven round the male propitiating him for being just that, the male. The argument that Jamai Sashti is really all about seeking blessings for the whole family (‘Ma Shashthir daya’ means having lots of children) does not wash.

It is in the same vein that our daughter ruled out a part of the Bengali Hindu marriage ritual where the bride’s father, with the guidance of the priest chanting mantras in doubtful Sanskrit (who’s to know), performs the sampradaan – gives away the daughter to the groom and his family.

The logic is simple. She is not a commodity to give away and the exhortations to the in-laws to take care of ‘our daughter’ can be saved because she is quite capable of earning her keep, thank you! There was a minor crisis during the wedding planning when the priest asked rhetorically, ‘How can you have a wedding without sampradaan’ and then like all good priests he fell in line when the dakshina was tweaked.

As with every quaint social practice that lingers, there is a bit of supporting legend. A king and his wife performed yagna for 12 years for a child. Eventually when the child came, she/he was stillborn. When the inconsolable parents arrived at the ghat for the cremation of the baby, Ma Shashthi appeared, riding on her wahan, the cat, and said she would breathe life into the child provided… 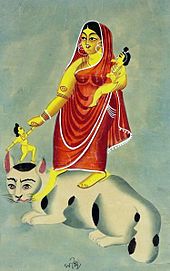 Here the legend ties up with others which tell the tale of how a lesser god or goddess came to be more widely worshipped by engaging in good worldly manipulation. In the case of Ma Shashthi, she ensured her place in the current list of living deities by giving life to the baby whose parents spread around the good word about her munificence. There is also a fairly decent Bengali play currently running, Chand Manasar Kissa, which narrates how the lesser goddess Ma Manasha engineered a greater worship of herself.

Declining traditions eventually die but Jamai Sashti has received a new lease of life from a very unlikely quarter. When we relocated to Kolkata after a quarter century, we were surprised to learn from our maid who cooks for us how she had observed Jamai Sashti within her family.

The piece de resistance of the meal she had prepared for her jamai was the mustard hilsa curry. And do you know how much the hilsa cost, she asked and sotto voce added, ‘A thousand rupees!’ As good an example as any of how with rising incomes, gentrification is taking place with the working classes adopting the social mores of the classes above them.

This is where the matter would have rested but for the fact that the West Bengal government issued a notification a couple of days ago declaring a half holiday on June 19 when all good people in the government could go home at 2 pm. To do what? Celebrate Jamai Sashti!

Many in the administration could scarcely believe their eyes when a copy of the notification landed on their table.

In one case, it was worse. Going by a news report, this particular member of an All India Service was in the middle of a busy day buried under file work when a batch mate called from Delhi to congratulate him for being a jamai in Bengal which would earn him half a day off, no matter that on most days he left home long after sundown. If your chief minister issues such an order giving new life to an arcane tradition, then you have no option but to be ribbed by your batch mates.