Be it Khaneqah-e Niazia or Chunna Mia ka Mandir, devotees gathered at these shrines to celebrate Lohri and Makar Sankranti with equal reverence.

Bareilly (Uttar Pradesh): The three-day festivities that began with Lohri on Wednesday and continued with Makar Sankranti on Thursday and Friday brought to the fore an oasis of the Ganga-Jamuni tehzeeb (pluralistic culture) in Bareilly, in the midst of the desert of hate-mongering that many other parts of Uttar Pradesh have become.

Stories of amity, brotherhood, love and co-existence abound in Bareilly, also known as Nath Nagri for the seven Shiva temples. It finds mention in the epic Mahabharata as Panchal – the birth place of the Pandava queen Draupadi, also known as Panchali. It has the shrine of Aziz Niazia, descendent of Shah Ayatullah Indizani of Bukhara (Afghanistan) who had relinquished his empire to adopt Sufism and spread the message of love and devotion over 300 years ago.

Another notable shrine is the Chunna Miyan ka Mandir, also known as the Lakshmi-Narayan temple in the heart the city. This temple has a picture of Fazalur Rahman alias Chunna Mian with a container on his head – a mark of his kar seva to build this temple as recently as 1960, inaugurated by then President Rajendra Prasad – among the pictures of Hindu gods and goddesses. Chunna Mian had donated his land and Rs 1,00,001 at that time to build this temple.

Be it Khaneqah-e Niazia or Chunna Mia ka Mandir, devotees gathered at these shrines to celebrate Lohri and Makar Sankranti with equal reverence. Of course, the celebrations were smaller due to COVID-19 precautions, but the atmosphere was full of love and amity.

Also read: Kairana is Not a Communal but a Musical Metaphor

My colleague at the Invertis University, Nasreen Javed – who guided me through Bareilly’s streets and shrines –first took me to Malion ki Pulia (settlement of gardeners). “My ancestors who were landlords had got malis (gardeners) settled on their land, which came to be known as a Malion ki Pulia. The devotees buy roses to offer to Khanqah-e Niazia and other Sufi shrines, and hibiscus, oleander and marigold flowers to offer to Shiva, Lakshmi and Narayanji in the temples,” Nasreen said, adding, “The number of malis here has dwindled over the years with the malls, restaurants and garment shops coming up, but it still continues to be a favoured spot for buying flowers”.

While guiding me through the streets and shrines on Makar Sankranti day, Nasreen shared her story with me. “When I was in my teens I had a friend, Asha Upadhyay, studying at a coaching centre and living in a town lodge. One day in the late 1980s, she was fear-stricken and felt insecure. I brought Asha (a Brahmin) home and my parents prepared a separate room for her to live in. Asha set up a puja corner in her room. We celebrated Diwali and Holi to keep Asha happy, and Asha celebrate Eid with us with equal enthusiasm. Growing up together, we used to play and visit dargahs and temples.” 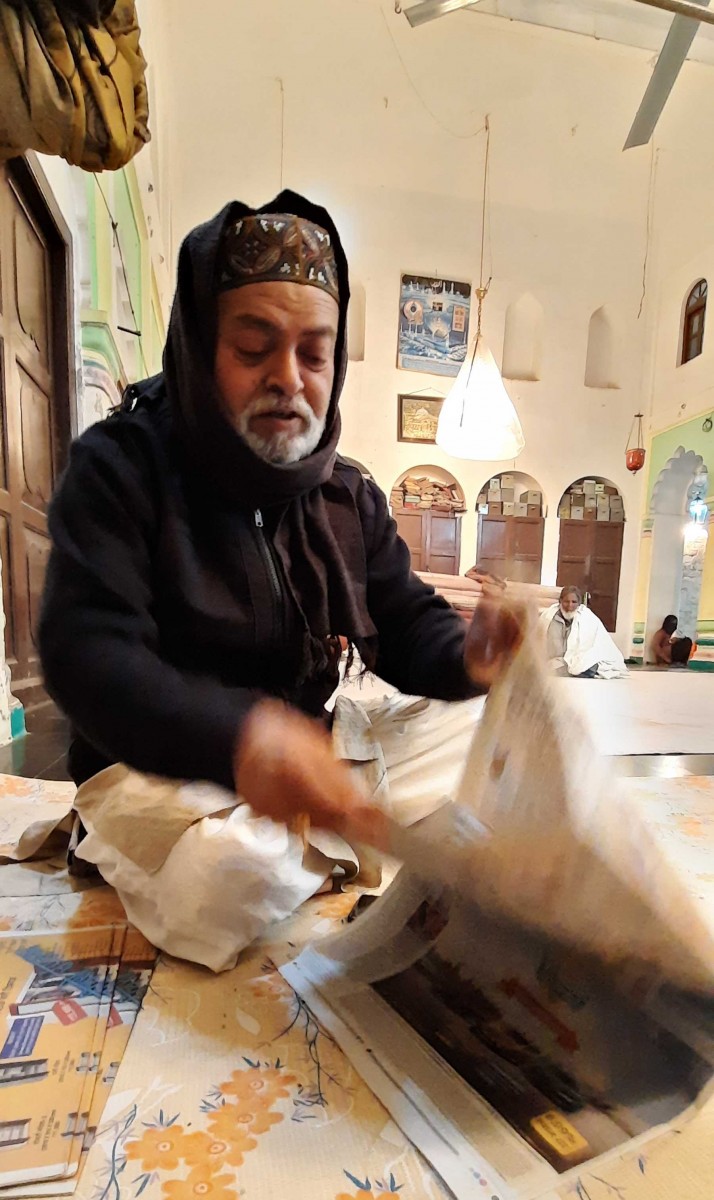 “When she was older, Asha married a man named Deepak Lotha. The couple visited our home after their marriage. They refer my abbu (father), Javed Hasan Khan, as ‘abbu’ and my mother as ‘ammi’. They are now settled in Haldwani but they are our family members. They visit us often and I, too, call on them,” Nasreen continued, promising, “I will make you meet Asha and Deepak one day.”

No place for hate

Mohammad Sibtain Niazi alias Shabbu Mian, a Sufi cleric and descendent of saint Aziz Niazia, greeted us at Khankah-e Niazia. “Chhodo mujh-e bekhud mera aaram yahi hai; Nam-o-nishan rahn-e do bas naam yahi hai (Leave me to myself with the name, I am at peace here. I don’t hanker for fame, let me live with my name in seclusion),” Shabbu Mian chanted this couplet by Qibla Shah Niazi.

“We don’t ask for the caste or religion of anyone visiting us. We make dua (prayers) for all, and people visit us with love. We are bound by the Almighty’s farman (order) to ensure peace, harmony and brotherhood,” he said, smiling. Asked about the rise of an atmosphere of hate, Shabbu Mian said, “We will keep on spreading love and amity, without seeing what others are doing. We are here to give peace to the distressed. Love is the panacea to all ills afflicting human society.”

The frequent visitors to Khaneqah-e Niazia include the mayor of Bareilly, Umesh Gautam – who is also a Bharatiya Janata Party leader. “He (Gautam) is a mureed (devotee) of this dargah and is very nice to all of us. He specifically visits during the Urs mela (fair) and oversees the arrangements,” Shabbu Mian said, while inviting us to the Urs mela to be held on January 20.

The pujari at the Lakshami Narayan temple or Chunna Mian ka Mandir, Sandip Tiwary, says the name of Fazlur Rahman alias Chunna Mian – the builder of this temple – with as much reverence as for saints in the Hindu pantheon. 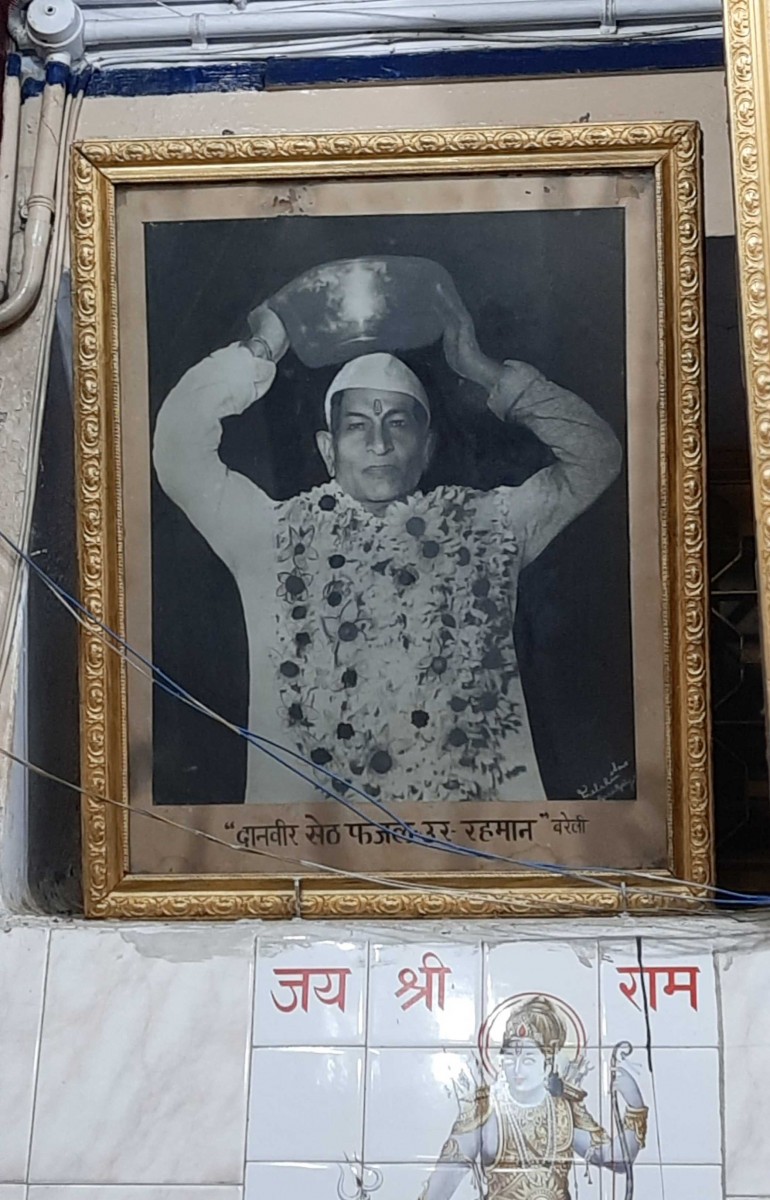 “I was not destined to see Chunna Mian ji. But I learnt a lot by hearing from Bhup Ram and other caretakers of the temple, who had seen Chunna Mian ji. Though he was a landlord, he carried containers with bricks and other materials on his head to build this temple. He devoted his entire life to the service of this temple. He was the true son of the God,” Tiwary said.

Tiwary said that previously, many Muslims too used to visit this temple. “The number of Muslim visitors has relatively dwindled of late. But we treat them with care and love when they visit us, offer prasad to them and make prayers for them. I am always conscious of the fact that Chunna Mian ji had built the temple,” he said.

Headquartered in Lucknow, Uttar Pradesh chief minister Yogi Adityanath has made many objectionable comments on the Taj Mahal – the monument of love built by Mughal emperor Shah Jahan and located 221 km from Bareilly – and is on a spree to change the names of many ancient and medieval cities and towns in UP to pursue his politics of polarisation. Though located between Delhi and Lucknow – 250 km from Delhi and 252 km from Lucknow, to be exact – Bareilly is far removed from the “wave” of hate and conflict in Lucknow and Delhi.