As Modi Dreams of Becoming World’s Yoga Guru, Where Are India's Yoga Dolls?

Amid Modi's continued push for yoga, it's surprising that India has not yet emerged as a producer of yoga dolls. 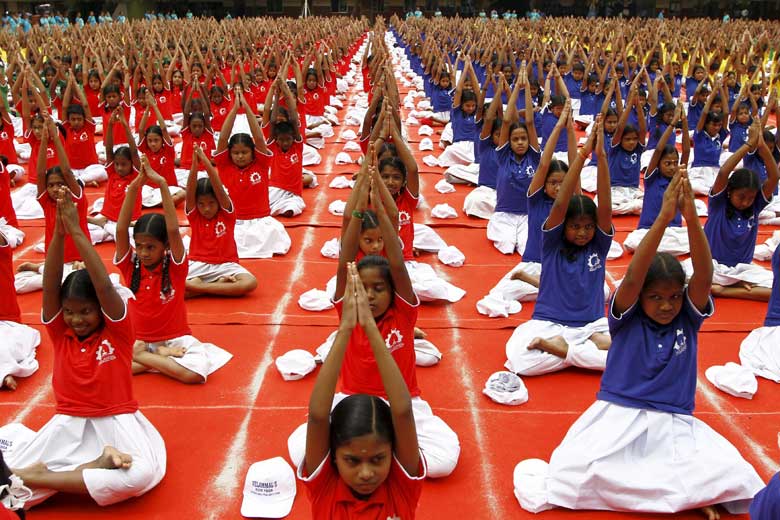 Is it possible for children to learn about yogic culture and Indian values through playing with dolls, particularly ‘yoga dolls’? Just what might such a doll look like and where are they made? Who buys them? A ‘yoga doll’ is a type of toy that has articulated limbs and is capable of having its body bent in ways resembling more advanced yoga postures.

This is an extension of the ‘traditional’ toy category, which has incorporated a global interest into its product lines. The question is, what this might do for yoga and who might capitalise on this?

Separately, is it possible for yoga dolls and toys to act as potential non-human ‘gurus’? It would, potentially, provide children with more than just access to the perceived and popular wellness benefits of yoga for health and lifestyle purposes. How might this completely bypass the professional authority and orthodoxy of yoga teachers, styles and organisations? And, what might this do for other yoga practices which are perceived to be more legitimate and authentic?

A guru is considered an expert teacher who is capable of transmitting knowledge to disciples, forming a continuing inter-generational tradition (paramparā), which will preserve and perpetuate the transmission of teachings. However, for this relationship to work, a human guru might not always be required. Objects such as books have been regarded as gurus or forms of representations of a particular tradition.

The best example of this is the Guru Granth Sahib, which is legally considered to be a ‘living guru’ whose desecration carries lengthy prison terms. Likewise, contemporary yoga spread around the world, initially through books and pamphlets, even when such texts were not always assigned to a known tradition or guru. The obvious nature of the written word in prescribing and translating experience imply that guruship can occur, so long as the act of reading can enact a sense of connection or discipleship in the reader. What, then, can we say about children playing with toys?

In 2019, the global toy market was valued at $22.10 billion and was projected to gradually grow at a compound annual growth rate (CAGR) of 1.4% between 2020 and 2025. North America headed the regional markets, as did the 9-15 years age category, which accounts for almost 50% market share of the total global market across all segments and ages.

While any human or animal toy could be used by a child to play or do yoga, there are many different brands available in the markets. Here are some of them: Zita, Yoga Kung Fu Monkey Dolls, Our Generation Lucy-Grace Doll and Dress Along Dolly, Black Girl Doll with Yoga Set, Manhattan Toys Baby Stella, AZ I AM, and Barbie’s Made to Move doll.

In 2020, Mattel’s Barbie brand generated about $1.35 billion, up from about $1.16 billion in 2019, with over half of Mattel’s revenues generated in the North American region. In 2021, the Barbie brand was named the 2020 Top Global Toy Property of the Year and Europe’s Top Gaining Toy Property by category.

Traditional toys and games are forced to compete with electronic games by digitising and adapting to remain viable. Dolls are going digital, developing online personas within metaverses filled with avatars. The ‘Wellness line with Barbie’ is all about physical wellness and emotional well-being. In the vlog, Barbie’s animated avatar explains, “I love doing yoga. I try to practice it every single day. And it’s called ‘yoga practice’, because it’s not really about perfecting or mastering a move. It’s about the practicing of it. It’s the journey.”

Where this gets interesting is how Prime Minister Narendra Modi has previously referred to India as the ‘viśva-guru, or world-guru’. Modi’s Bharatiya Janata Party (BJP) contends that India’s soft power does not operate at total capacity and can increase its “magnetic power” by supposedly returning to the viśva-guru status it apparently once enjoyed. According to the BJP’s 2014 manifesto, building a ‘New India’ supposedly requires ‘strengthening our cultural roots and preserving civilisational continuity’ through the ‘promotion of Sanskrit and Yoga’.

Also read: The Evolution of ‘Woke Yoga’ as a Branding Strategy

The BJP’s 2019 manifesto stated that as the world celebrates June 21 as International Yoga Day, the government has sought to “promote yoga as a vital method to achieve physical wellness and spiritual rejuvenation across the globe and will continue to work towards the training of yoga practitioners” through “rapid expansion of yoga health hubs, yoga tourism and research in yoga”.

India intends to position itself as the ‘world guru’ and leverage further nation-building expansionist aspirations across the $4.5 trillion global wellness, leisure and cultural/spiritual tourism industry, which is forecasted to rebound with an annual 21% growth between 2022-25. Yoga-oriented, Sanskrit-inflected experiences are anticipated to draw many tourists to India through ‘yoga tourism’, which is considered a force for potential transformation of the individual, community and world. Although, at least in the north Indian state of Uttarakhand, which is home to the supposed ‘yoga capital of the world’, Rishikesh, the development rhetoric has materially transformed little.

India’s self-reliance, when combined with its new conservatism and vision, call for a break from the past to move into a ‘New India’. While Modi considers this the only way forward, one might ponder how breaking with the past squares with promoting traditional handcrafts and cultures. In India, traditional toys compete with online gaming, particularly in the 15+ age groups. Added to that, India is at a disadvantage in producing all things electronic. This is due to the high import duties on the equipment needed to expand the electronic toy market, which China and Taiwan already dominate.

The BJP has attempted to mediate the ‘yoga/viśva guru’ through a non-human, animated version of Modi through the initiative ‘Yoga with Modi’. This avatar has some similarities to the online form Barbie’s yoga doll takes. The viewers find Modi’s avatar to be the sole participant in the room, and even though it is not Modi’s voice giving the instructions, it appears as if Modi is the teacher.

In these instances, the claims of India be(com)ing the world guru are compressed into Modi’s yoga guru avatar. However, while multiple ‘yoga classes’ with Modi are available in many languages (12 Indian and 12 non-Indian), the view ratios are relatively low. These videos were uploaded in 2018. However, the stretch of their softer yogic power appears restrained, since 95% of the total 1.7 million views came from within the Indic group of languages. This demonstrates a significant cultural and linguistic insularity.

Modi has pushed for India’s local toy industry to ‘doll-up’ and increase production. Parallel to this, the self-reliant India campaign (Ātmanirbhar Bhārat) is a calculated approach for India to rise in the global soft power rankings by promoting the ‘vocal for local’ products, hoping they will eventually transform into globally recognisable brands. Though, from a policy perspective, this appears to be anything but thought through.

The Toy Association of India intends to facilitate trust and cooperation between India’s 800 toy and game manufacturers within a domestic market valued at $2 billion. This equates to approximately 1% of the world market. India and China are expanding markets due to population size and rising disposable incomes; however, India’s toy industry struggles to meet domestic demand and expectations.

India’s toy industry growth has been compromised by retailer preference for Chinese-made goods, which dominate over 90%.of the total market. This scenario leads to local manufacturers being unable to meet consumer demand for locally made products. 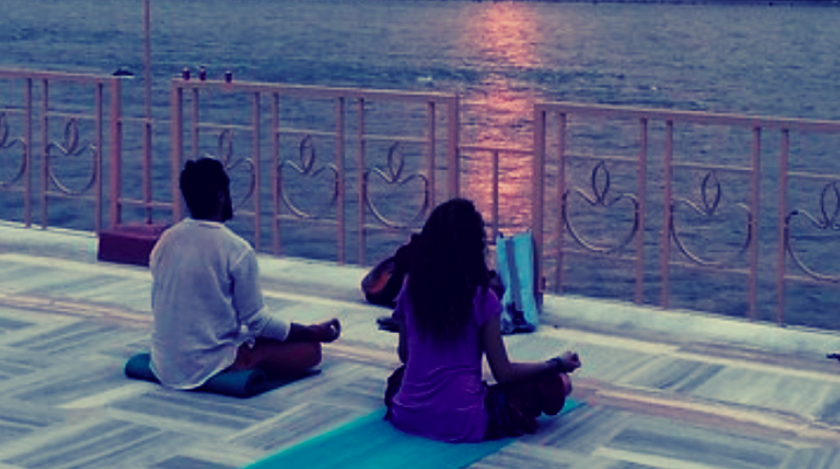 People do yoga by the Ganga at Rishikesh. Photo: DJ SINGH/Flickr (CC BY-NC-ND 2.0)

Amid Modi’s continued push for yoga, it’s surprising that India has not yet emerged as a producer of yoga dolls. Perhaps, with Modi’s stated intention to further India’s global expansion and build brand equity through the international promotion of its ‘swadeshi toy industry’, in the not-too-distant future, various yoga doll product lines might emerge. Obviously, there is much more to a yoga lifestyle than being sporty and fit, however, how one might market a traditional yoga doll in some other form? Moreover, how much could children play with a bearded yogin seated in padmāsana staring into ājñā-cakra?

It is difficult to find examples of specifically Indian-made yoga dolls. Some do appear on Amazon and Flipkart, though they might not have flexible limbs and are advertised as ‘Garden Yoga Dolls’. Alternatively, Flipkart sells two brands of yoga dolls, but neither appear to be made in India. One is the Barbie Made to Move and the other is the Poksi Yoga Sparkle Girl Doll.

Popular narratives around Patañjalayoga are often crowded by misrepresentations. AZ I AM promotes a typical rendition of yoga’s perceived ethics, as if they were intended or indeed could be used to teach young girls about empowerment and confidence. AZ I AM yoga dolls refashion contemporary ideals for children based on the company’s interpretation of yoga philosophy.

For instance, the doll associated with the second limb (niyama) is the Niyama Nature Girl, who lives in Manaus, Brazil. Thus, it is green and eco-sensitive, loves exploring the Amazon forest and eating açai berries. It has a pet monkey and wants to be a doctor. The doll associated with the fourth limb (prāṇāyāma) is the Prana Fashion Girl who lives in Yunnan, China. It lives with its grandmother and loves designing and sewing clothes; it has a pet elephant and is organising its first fashion show.

While AZ I AM attempts to connect to an imagined yoga tradition and lifestyle, it mostly misrepresents it.

But, who will come to Modi’s aid?

While Desi Toys promotes a range of products such as wooden spinning tops, miniature kitchen sets and chess boards, it neither mentions yoga nor yoga dolls.

It’s also difficult to see how India might level up to become the ‘world guru’, since the toy industry already demands more than just blocks of wood. Tomorrow’s yoga doll needs to be not just animated, but, possibly, go beyond being animatronic. Consumers appear to want (or being directed toward) a hybrid world of traditional/digital toys. Moreover, imagining that India’s local toy industry expands beyond its 1% of the world’s total to dominate it, how this might facilitate a soft power level change to become the ‘world guru’?

Patrick McCartney is a cultural anthropologist based in Kyoto, Japan at Kyoto University. He works on the global consumption of yoga and the construction of Sanskrit-related narratives and identities from within the transglobal wellness tourism and faith-based development industries.

Diego Lourenço is a historian and yoga teacher who is based in London and a PhD candidate at the Humboldt University of Berlin. His research bridges history, sociology and psychology in global and area studies of yoga.