Silken Tales From the Khasi Hills

Umden in Ri Bhoi has emerged as the epicentre of ethical sericulture and Eri silk weaving, thanks to the women, their love for the art and their will to pull themselves out of the cycle of poverty. They are the women of Umden, a cluster of tiny villages in Ri Bhoi district of Meghalaya. Ri Bhoi, in the Khasi Hills, is home to the Bhoi people, a sub-group of the Khasi tribe. The worms are not ordinary caterpillars but the famous Eri silkworms that produce the fiber, which they transform into the most sought after threads in the world, a type of organic silk locally called Eri or Ryndia.

Umden, with about 770 households spread across 17 villages, has become an exclusive destination for connoisseurs of organic silk and cotton. It is a centre known not only for organic silk, but also for its perspective on life that promotes a lifestyle established in the lap of nature and diametrically opposite to the high-energy consuming way of life of the modern world.

Silkworm rearing and weaving has an ancient history in these parts. Umden, about 65 km from state capital Shillong, is one of the repositories of this knowledge in Meghalaya. The people of this area claim it as the ancient knowledge of their ancestors. Not only that, the art of natural dyeing is one of the high-value traditional knowledge that these people have kept alive and nurtured over the centuries.

Locals say the practice had nearly died down. Modern fabrics, cheaper and easily available, had replaced the age-old local cottage produced yarns. By the eighties, most farmers had stopped rearing the worms or growing cotton, another traditional practice. Weaving was abandoned, except by a few individuals who clung on to it.

One of the few people who hung on was the family of Thrang Timung. This stubborn attitude seems to have paid off. When most gave up, Timung (52) took a keen interest in the art practiced by her mother and learnt the trade of silk worm rearing, cotton cultivation and the secrets of dyeing the fabric she wove from Eri and cotton.

Supported by local government departments and egged on by state financing institutions like the Meghalaya Industrial Development Corporation (MIDC) mandated to make self-help groups (SHGs) a success, like many others across the state, she too campaigned among her peers. Timung set up an SHG through which she, along with her friends, continued to practice cocoon cultivation and spinning, even though it was not paying as it is today.

Who would have thought that the persistence of these women would eventually create so much interest in the fabric and help make Umden an epicenter of one of the most successful revival of traditional sericulture anywhere? As one of the pioneers of the revival, she told VillageSquare.in that she was delighted to see almost every household in this area practicing cocoon cultivation, rearing, spinning, dyeing and weaving or at least one of these activities.

Over time, the SHG grew into a cooperative society. Today Timung is among the leaders in one of the most successful cooperative societies in the area. Called Diwon Handloom Eri Cotton Eco-Tourism Multipurpose Allied Coop Society Ltd, it is a joint effort of 45 women who were determined to pull themselves out of the cycle of poverty.

Besides relying on cocoon cultivation and weaving, they have branched out into tourism using their organic industry as their unique selling proposition (USP), luring many local, national and foreign visitors on what is called the Organic Silk Tour or the Silk Weavers’ Village Tour, flaunting their nature-based lifestyle.

Diwon society has its own workshop with ten looms and out of these, four are jacket machines. Earlier, they used the traditional hand spindles to spin the thread but now they have equipped themselves with spinning machines that are operated by the foot. These were donated to the area through a German concern called the Seidentraum that was interested in the raw silk.

They sell the cocoons or the thread when they require quick money, but otherwise use every length of thread for weaving their own items. They make shawls, stoles, mufflers, Dhara (the traditional costume of Khasi women), lungi for the War-Shella traditional women’s wear and lengths of raw silk cloth that is much sought after for making shirts, kurtas and other modern wear.

They are experts in making the Jain Ryndia, a shawl woven from their own production of raw silk for both men and women. Jain Ryndia is one of the only silks that is extracted without killing the worm and is therefore also called ethical silk or Peace Silk in the market.

“We have come a long way from the nineties when we had nothing but our own love for the art which kept us going. Now the people have woken up to the specialty of these organic weaves and we are earning a steady income from this,” Timung told VillageSquare.in. “Earlier, it was not worth all the work, but now it has become an important supplement to agriculture, our main livelihood.” The women earn around Rs 5,000 in a month, she said. “Ri Bhoi was known as the poorest district of Meghalaya. Now, because of our sericulture, we are now going to become the most self-sufficient,” Timung said. 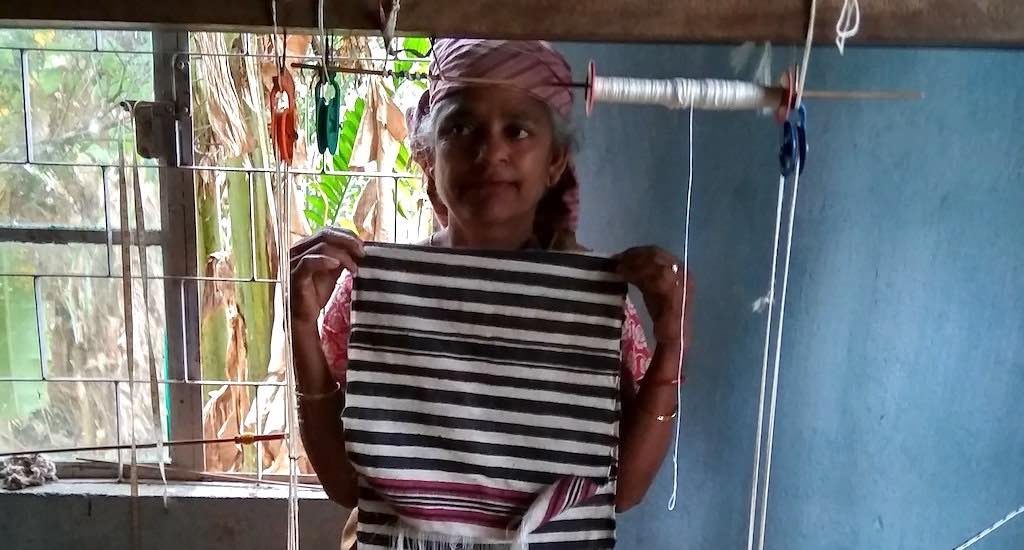 Even the youth are involved in the cottage industry, tailoring handbags, now popularly called the Pla Umden. These bags, which are in high demand, are made of locally woven ordinary threads with indigenous designs. “Now our young boys too do not sit idle, but wish to earn. Stitching one bag will get them Rs 150. In a day, they can make three or even four,” Timung said, pointing out that this amount is equivalent to a day’s wages in the rural area.

The women deal not only in Eri, but also buy raw cotton from the market, spin it, dye them in beautiful colors and weave them. Because of its traditional proficiency in natural dyeing, the cluster has also been chosen as a center of natural dyeing where they have improved the art by adding the latest modern technology.

Timung and her friends say that they have attended several sessions over the past years. The trainings have also equipped them with skills that enable them to fine-tune the rather rough weaves of the traditional looms. Besides they were given perspective by the experts whose talks gave them a global view of their trade and the marketability of their cottage products. Vision and imagination was an added component they acquired through the trips outside the state.

Timung, for instance, had the opportunity to attend a crafts training in Hyderabad. She learned that the dyeing they did in their village could vastly be improved and that it would enhance the marketability of their fabrics. She has submitted a proposal to the government for a dyeing shed with all the required apparatus. She is yet to hear from them.

Of course, sericulture got a major boost throughout these years from the various government departments that have supported them with numerous schemes and programmes for the sector. In 2009, the Indian Institute of Entrepreneurship (IIE) launched the Umden Eri Silk Cluster with support from Union Ministry of Micro, Small and Medium Enterprise (MSME).

Through this project, workshops were provided for different groups of artisans, a common facility center was provided, weavers were given training both in weaving and growing and financial linkages were arranged. Umden was chosen because it was already a traditional center for Eri culture, and one can say that their support did not go to waste.

Timung and the Diwon society has attained a level of recognition that has crossed borders. A government website says, “The co-operative is a knowledge repository of the art of producing natural dyes. Traditionally limited to three colors, the co-operative discovered ways to produce another 12 colors. Using no more than raw material available locally, the dyes are produced solely from organic sources. Their organic dyes and processing methods have been recognised by the Crafts Council of India. It has now become an area of study and research for design students, and a point of interest for foreign visitors.”

With further inputs and training, the 12 colors have increased to 23, using natural dyeing techniques and these include a range of pastel hues. Today, these soft pastels in stoles, mufflers and shawls made of their own Eri silk weaves steal the show anywhere they go and are in high demand. Their weaves and tints are in high demand among the ecologically conscious fashionistas, who procure raw materials from these silk clusters in Ri Bhoi.

Linda Chhakchhuak is a journalist based out of Meghalaya.

This article was originally published on Village Square. Read the original article here.