Abandoned by Families, Adopted by Strangers: Lives of Leprosy Patients in Kashmir

“We all have the same story here. After my family abandoned me, it was these people who adopted me and looked after me for all these years."

Elderly men socialising after lunch at Lepers Colony in Kashmir. Photo: By arrangement.

Srinagar: Nizamuddin Bajad, who claims to be 100 years old, was a young man when he arrived in a leper colony situated on the banks of Nigeen lake, far from the noise and crowd of Srinagar city.

Bajad, a resident of Chattaragul village in Ganderbal district, had lived all his life as a nomad, travelling across stretches of Jammu and Kashmir with his flock of sheep and goats. Then one day, he suddenly fell ill and was diagnosed with leprosy, also known as Hansen’s disease.

“I was married and was living a happy life as a Bakarwal. But everything changed when I was diagnosed with this disease,” Bajad said, while sitting with his old friends outside his apartment.

Leprosy is a chronic infectious disease and mainly affects the skin, peripheral nerves, mucosal surfaces of the upper respiratory tract and eyes. It can occur at all ages and is likely transmitted through droplets, from the nose and mouth, during close and frequent contact with untreated cases.

Also read: Leprosy Is Making A Comeback In India, But The Govt Wants to Deny It

With no medication back then to treat the disease, Bajad’s family left him on his own before he found his way to the leper colony in Srinagar.

“I had nowhere to go. My family left me at god’s mercy. I was devastated. But, after arriving here, I got a new lease on life,” he said.

In the 1980s, after the discovery of medicines labelled as multidrug therapy (MDT), leprosy became a treatable disease. The medicine was nothing short of a miracle for patients like Bajad, who till then were considered “untouchables” by society.

Living in the colony for the past 60 years, Bajad has not only been cured but also gotten married and started a new family.

“When I arrived in this colony, there were many like me, who too were abandoned by their families and were on their own. It gave me hope that I am not alone in this,” he said. “I found a new life here and it is my home now.”

The colony, which currently consists of around 71 leprosy patients, is the only rehabilitation centre of its kind in the Valley. Built during the 19th century under the Kashmir Medical Mission by Britishers, the colony, which gives a serene feeling because of its green ambience, consists of 62 quarters, a mosque, a double storied hospital and a graveyard. 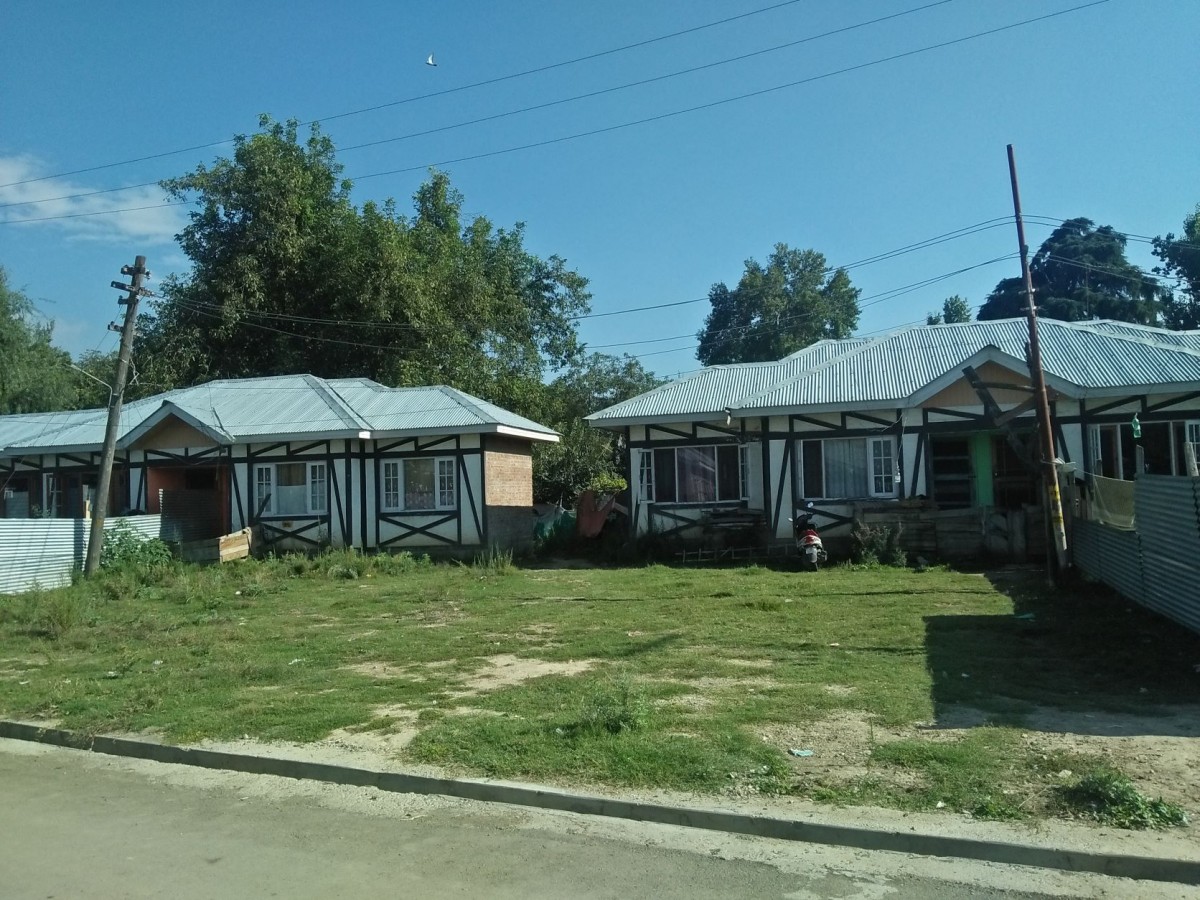 Residential quarters in the colony. Photo: By arrangement.

The colony is currently looked after by the Directorate of Health Services, Kashmir.

The department provides food, medicine and clothes to the patients. They also receive a monthly allowance of Rs 1,000 from the social welfare department.

Though the people, belonging to different places, were initially compelled to live a life in exile in the colony, over the years, their bonhomie, love and care for each other have made this place their permanent home.

Sharifuddin Sheikh, who is the spokesperson of the Leprosy Association that consists of the elderly people of the colony, said that after finding treatment for the disease, most of them who were abandoned by their families got married and started a new life here.

“Many of us, whose families have left them alone fearing that they too will catch the disease, later got married here after receiving proper medical treatment,” Sheikh, who is blessed with two healthy children, said.

“It has been 35 years now since I have been living here. In 1994, I got married to a woman who, like me, had no one else in her life,” he said. “I have two sons. One has done post-graduation and is working in a private company. Both my sons are healthy and are living a normal life.” Road leading to the lepers’ colony. Photo: By arrangement.

Sheikh’s wife Zarifa is also content in the colony. “I came here when I had no one in my life. My life was full of hopelessness. But god gave me a good husband and caring children,” Zarifa said.

Sheikh said they all live like a big family in the colony.

“Everybody knows each other here. It is like a big joint family. We look after many patients who are old and have no family. Besides, there is always a medical team on duty in the hospital, which looks after all of us,” Sheikh said.

Sheikh said it has been many years since any new patient arrived in the colony.

“We haven’t seen any new patients here lately. The majority of us were brought here before the cure was found,” he said.

In 2005, the Government of India declared it had reached the World Health Organisation’s (WHO’s) target of eliminating leprosy as a public health problem.

Though successive governments have almost eradicated the disease in most states, according to the WHO, India still has the highest number of new leprosy cases in the world, followed by Brazil and Indonesia.

Also read: More Than Half of Leprosy Cases Reported From India: WHO

Every year, over 2,00,000 such cases are detected globally and India accounts for more than half of the total cases.

Mohammad Hussain, a resident of Kargil, said that after being diagnosed with the disease, his family too deserted him when he needed them the most. “My family members looked at me as if I was evil. It was heart-wrenching. It has been almost 30 years and I haven’t seen my family since,” Hussain said.

Hussain said after getting cured, he married a woman from the colony and has a beautiful daughter now. “My daughter recently got married and is living a normal life with her husband,” Hussain said.

Apart from getting government assistance, many NGOs and local committees have been continuously contributing to the welfare of the leprosy patients in the colony.

Ghulam Mohiuddin, a resident of Kokernag, said that it was 1963 when he came to the colony. “I still remember three days after I came here, a holy relic was stolen from Hazratbal shrine, leading to protests and mass agitation,” Mohiuddin said.

Mohiuddin said for the past 58 years, it is the other patients and their families who are taking care of him.

“We all have the same story here. After my family abandoned me, it was these people who adopted me and looked after me for all these years. I don’t think I would have got the love and care even from my family which I feel here,” he said.

Mohiuddin said though some of his relatives live nearby, he has never visited them in all these years. “I have my own family here. I don’t need anyone else. I have made a wish that when I die, it will be these people who will bury me,” he said.

Junaid Kathju is a freelance journalist based in Srinagar. He tweets @JunaidKathjoo.