The Navy continues to grapple with severely depreciated underwater platform assets, which are unlikely to be made good soon, due to flawed and unsound planning. 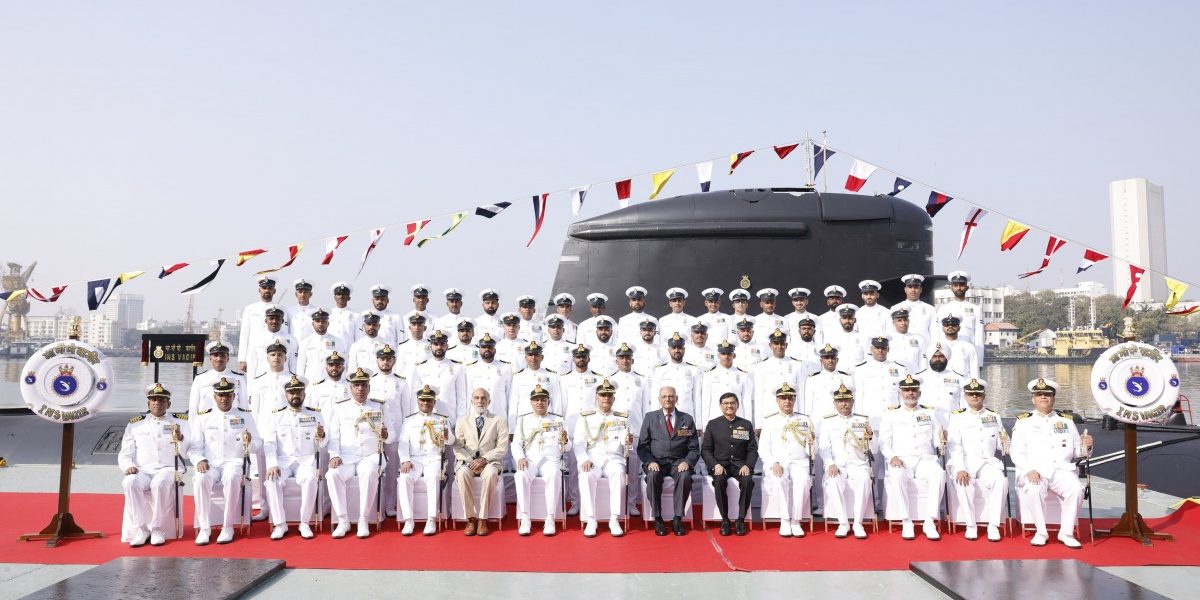 INS Vagir was commissioned into the Indian Navy on Monday. Photo: PIB

Chandigarh: Commissioning INS Vagir, the fifth of six licence-built French Kalvari (Scorpene)-class diesel-electric conventional submarines (SSKs) into Indian Navy (IN) service on Monday, while noteworthy, also highlights the forces severely depreciated underwater platform assets, which were unlikely to be made good soon, due to flawed and unsound planning.

The IN’s prevailing SSK ‘hunter-killer’ numbers were eight boats short of the stipulated 24, scheduled for induction by 2030, in accordance with the Navy’s 2012-27 Maritime Capability Perspective Plan (MCPP). Furthermore, with a majority of its older Russian EKM ‘Kilo’-class variants, and only slightly younger German HDW boats due imminently for retirement, senior naval officers conceded that the IN faced serious problems, even in the foreseeable future, in fielding an ‘operationally credible’ SSK fleet.

The enduring submarine shortfall principally challenges the IN in realising its wider strategic goal of sea-control and sea-denial in the critical Indian Ocean Region (IOR), to rival the inimical Chinese navy’s rapid underwater platform accretion. Furthermore, these deficiencies also adversely diluted the effectivity of India’s much hyped naval role in the Indo-Pacific maritime security structure, which has gained centre-ground in recent years.

Presently, the IN operates 16 SSKs, of which seven Russian Type 877 EKM ‘Kilo’-class models and four HDW Type 209/1500 ‘Shishumar’-class boats were all between 20 and 34 years old. The remaining five were the Kalvari-class SSKs from France’s Naval Group – including INS Vagir (meaning Sand Shark) – that began joining IN service 2017 onwards, having been built under Project 75 or P-75 by Mazagaon Dockyard Limited (MDL) in Mumbai. INS Vagsheer, a sixth similar P-75 boat was scheduled for IN induction some later this year or by early 2024, making it an overall total of 17 SSKs for the IN.

Also read: The Fundamental Problem With Defence? The Continuing Paucity of Funds.

But all the Kalvari-class SSKs, including Vagir, were inadequately armed, lacking heavyweight torpedoes (HWT) that significantly circumscribed their deterrence capability and operational efficacy. Instead, as part of the ubiquitous jugaad, or innovation that invariably accompanies all Indian military platforms and equipment, these boats were armed with the older German-origin SUT-series torpedoes that were acquired by the IN in the late 1980s for its four HDW SSKs after their operational lives were extended recently by some 15 years. The SUT torpedo fitment had also necessitated structural changes to the French-origin submarines, which earlier were configured to receive the Black Shark HWTs.

The reason behind this substitution was the scrapping of the tender to procure 98 Black Shark HWTs from Italy’s Whitehead Alenia Sistemi Subacquel (WASS) in May 2016, following allegations of corruption involving its then parent company Finmeccanica, in the 2010 import of 12 AW101 AgustaWestland helicopters from it for the Indian Air Force. And though the IN and the Ministry of Defence (MoD) had 2019 onwards had been in negotiations with Germany’s Atlas Elektronik and France’s Naval Group to procure 100-odd HWTs, not much had progressed in this regard, industry officials told The Wire.

In comparison, the IN’s submarine force development plans via its vaunted Rs 43,000 crore Project 75I (P-75I), pending since 2007, to locally build six SSKs under a transfer of technology is ‘completely adrift’, said IN sources. They indicated that P-75I was headed either for a major tender overhaul, or alternately could even be scrapped due to its ‘design overreach’, unrealistic delivery schedules and after-sales product support and other sundry unworkable clauses centred round technology transfer issues. 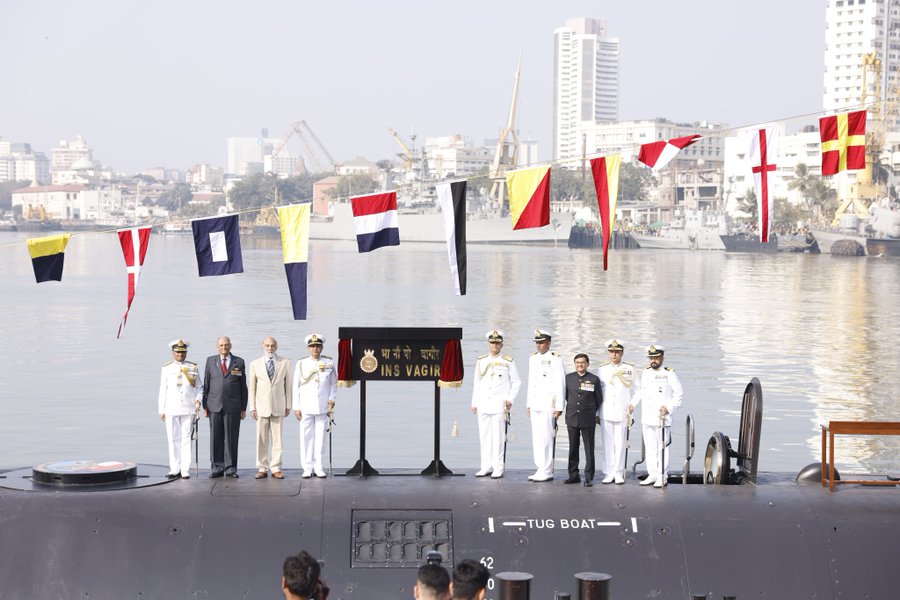 INS Vagir was commissioned into the Indian Navy on Monday. Photo: PIB

Principally, P-75I entails two competing Indian shipbuilders – MDL and Larsen & Toubro (L&T) – entering into partnership with a foreign submarine original equipment manufacturer (OEM) to build these six SSKs with air independent propulsion (AIP) systems and land-attack capability. Thereafter, the selected Indian shipyard would become the MoD’s strategic partner (SP) for the P-75I project, a category under the Defence Acquisition Procedure-2020 that the government has been unsuccessfully attempting to propagate by overcoming its inherent structural shortcomings.

But the ‘over ambitious’ Naval Staff Qualitative Requirements (NSQR) outlined in the IN’s request for information (RfI) in 2017, and thereafter in its RfP for P-75I, had resulted in four OEMs from France, Japan, Russia and Sweden declining to bid for the tender on grounds of the programmes impracticability and unworkableness.

Only Germany’s Thyssenkrupp Marine systems, Daewoo of South Korea and possibly Spain’s state-owned Navantia were, according to industry sources, the only OEMs still tentatively in the race for P-75I. But even their participation was ‘somewhat ‘tenuous’ for reasons largely consonant with those of other OEMs who had opted out of P-75I.

Industry officials said this reality had recently prompted a ‘rethink’ in the IN and the MoD, which centred simply on awarding France’s Naval Group an add-on contract for MDL to construct six more Scorpene’s fitted with AIP systems and with land-attack capability, instead of pursuing the ‘troublesome’ P-75I tender with its ‘impractical’ SP model.

Consequently, there were whispers in MoD and IN headquarters over a possible collaborative arrangement between Naval Group and India’s Defence Research and Development Organisation (DRDO) that claims to have designed an AIP system in conjunction with L&T, Thermax of Pune and the Naval Materials Research Laboratory in Ambernath for eventual fitment onto the Kalvari-class boats.

Hence, a Naval Group-DRDO tie -up for advanced AIP systems for the proposed P-75I project was reportedly under consideration, as such an arrangement would meet the governments Atmanirbharta initiative of securing self-reliance in defence equipment and also obviate criticism of awarding the French a follow-on submarine order on ‘pragmatistic’ grounds.

Recent media reports, quoting unnamed officials revealed that French President Emmanuel Macron was expected to imminently visit India to discuss the ongoing Russia-Ukraine war, but more importantly, to expand bilateral defence cooperation which, doubtlessly, could include discussions on selling the IN more Scorpenes.

Moreover, with MDL delivering INS Vagsheer, the sixth Kalvari-class boat sometime soon to the IN, there was the larger and starker issue of the shipyards submarine building skills, developed at great cost, once again falling into disuse. If such a state of affairs prevailed, which currently seems a dead-cert, it would be a disastrous re-run of the ‘lost decade’ for the IN between 1995 and 2005. This refers to the period when MDL’s submarine construction facilities remained idle for 10 years, following the corruption scandal involving the procurement of the four HDW boats, that ultimately remained unresolved.

MDL had licence-built two of these HDW boats, but the alleged wrongdoing in the deal that remained unproven-had led to all its submarine building activity being subsequently halted, as federal investigations proceeded at a snail’s pace and turned up nothing. In turn, this had resulted in MDLs specialised workforce, especially underwater welders, leaving to seek alternative employment abroad. But in 2005, MDL’s facilities were once again resurrected and skilled technicians re-hired for the P-75 programme at perilously vast expense, which the navy can ill afford to repeat.

“Through its inefficiencies in the P-75I tender, the IN seems determined to perpetuate MDL’s lost decade” railed a retired senior naval officer. To forestall such a consequence, it makes eminent sense to continue with the Scorpene programme, albeit with significant alterations as that would not only preclude delays in the 16-year-old 75I project, but also deliver the submarines in a shorter time frame, he added, declining to be named.

Other officials who had previously dealt with the IN too were taken aback over its P-75I tender, whose December 2022 deadline response from vendors – deferred earlier from November 2021 – has now been extended to end-2023 in an attempt to resolve its innumerable anomalies and failings. Even IN Chief of Staff Admiral R. Hari Kumar recently admitted that P-75I faced ‘several challenges’ but claimed that these had been ‘adequately addressed, but declined to elaborate. Even the IN spokesman declined to comment on the extension granted to the OEMs in responding to the RfP.

“It’s surprising that the IN which has previously demonstrated sagacity in pursuing indigenous shipbuilding and related projects, has faltered so grievously in managing such a vital project like P-75 over obviously avoidable obstacles,” said Amit Cowshish, former MoD financial advisor on acquisitions.

However, with some imaginative thinking and bold action it can still salvage it, he advised.